A woman whose weight plummeted to just five-and-a-half stone as she battled anorexia said ditching ‘toxic men’ and the gym has helped her stay in recovery and love her body.

Lola Pähkinämäki, 30, from Finland, battled the eating disorder from the age of 16 when she began starving herself to try and lose a few pounds.

But her eating disorder quickly escalated and Lola became dangerously thin, shedding more than half her body weight, until even children’s’ clothes hung off her frame.

The influencer, from Finland, battled her way back to health a few years ago, attributing her recovery to learning about her triggers. 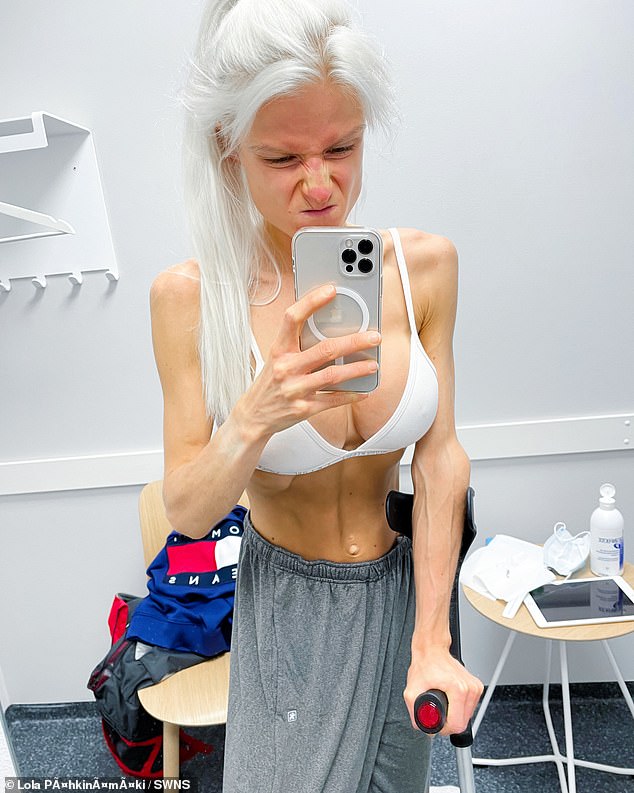 Lola Pähkinämäki’s, 30, weight fell to 5st 7lb after years of anorexia. The influencer, from Finland, realised that toxic men and a gym environment were contributing to her eating disorder and were huge triggers. She is pictured here at the start of her recovery 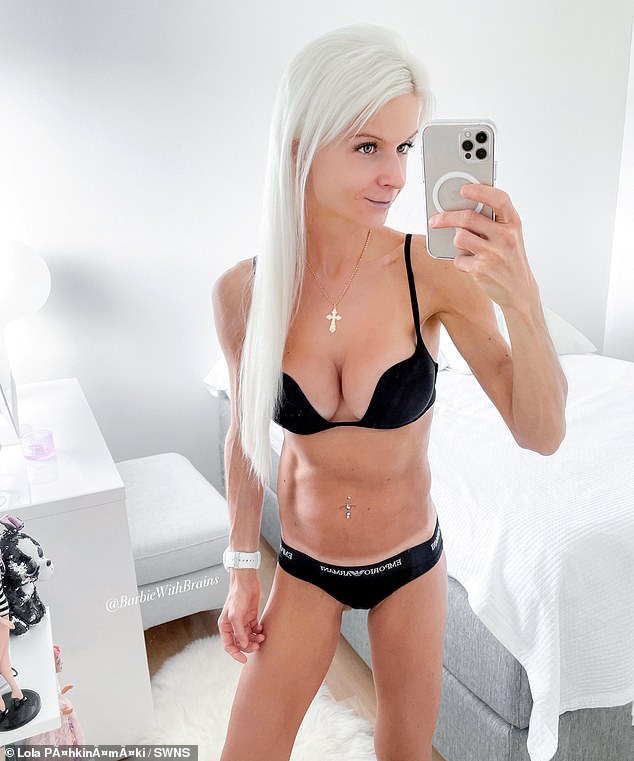 Since identifying her triggers three years ago, after a spinal cord injury, Lola has begun to recover from anorexia, although she still suffers with anxiety 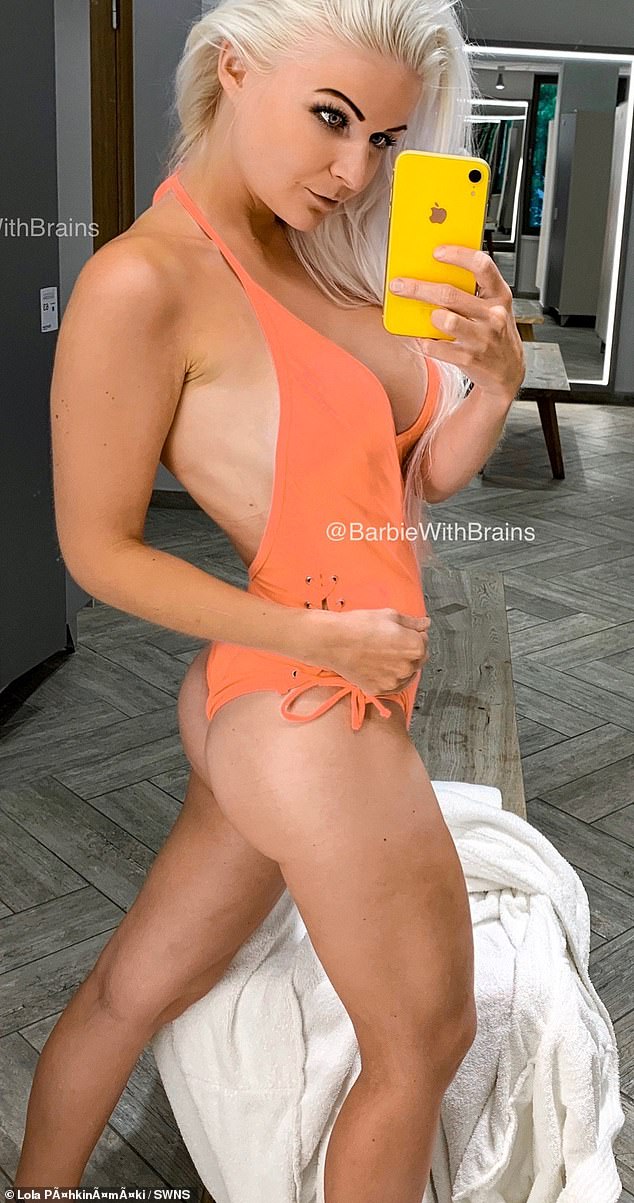 Lola first developed an eating disorder when she was in her teens, when dieting lead to an unhealthy relationship with food.

Lola was able to maintain a healthy weight for more than a year before she gradually began to lose more and more by restricting her eating and over-exercising.

She began to recover when she was 16 but relapsed soon after, she fully started her journey back to health after she was hospitalised again aged 17.

While she was a healthy weight for many years, she didn’t realise her mental health was being impacted by the gym until she suffered a spinal cord accident in 2019. 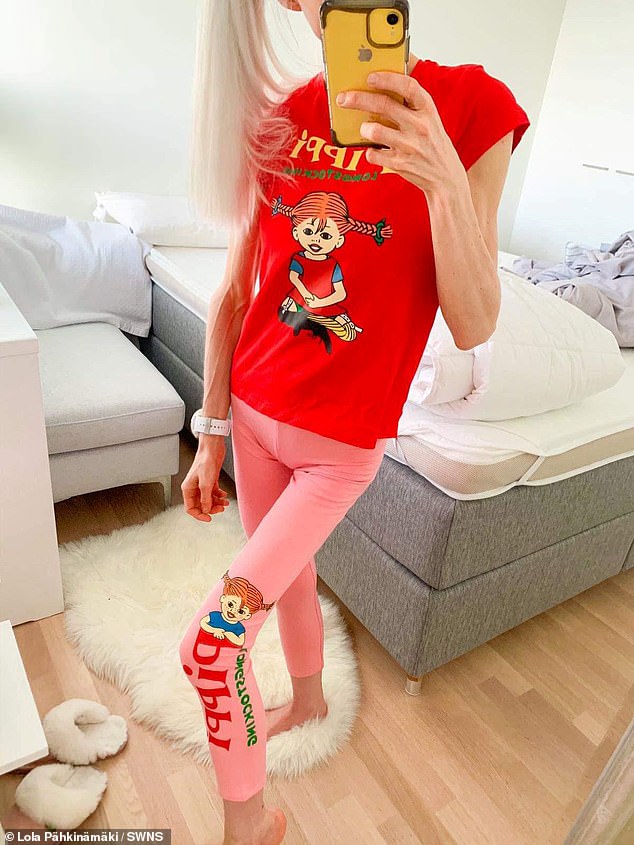 Lola first developed an eating disorder when she was in her teens, when dieting lead to an unhealthy relationship with food. Her eating disorder quickly escalated and Lola became dangerously thin, shedding more than half her body weight, until even children’s’ clothes hung off her frame. Pictured, at the start of her recovery 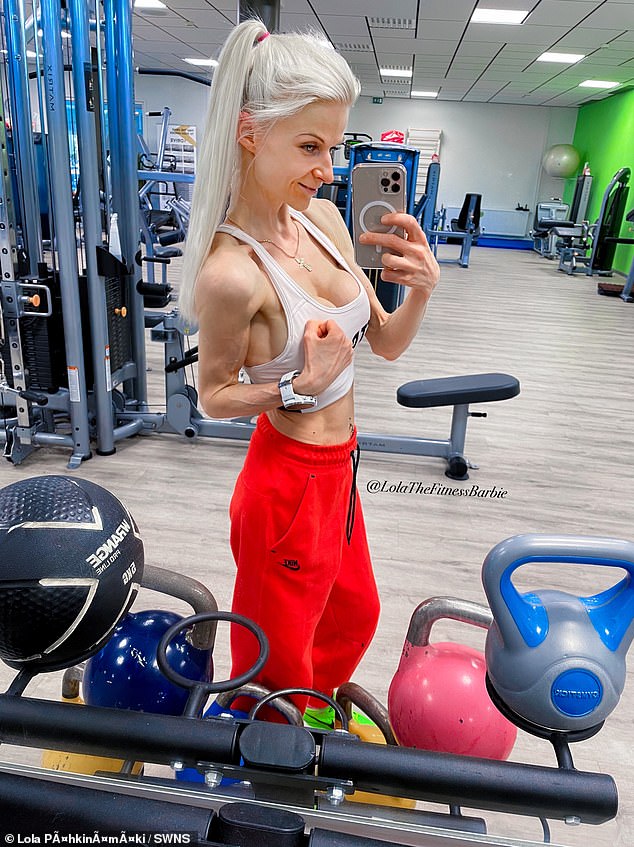 She says that whilst in hospital and unable to go the gym, she realised how much of a trigger the gym environment was for her 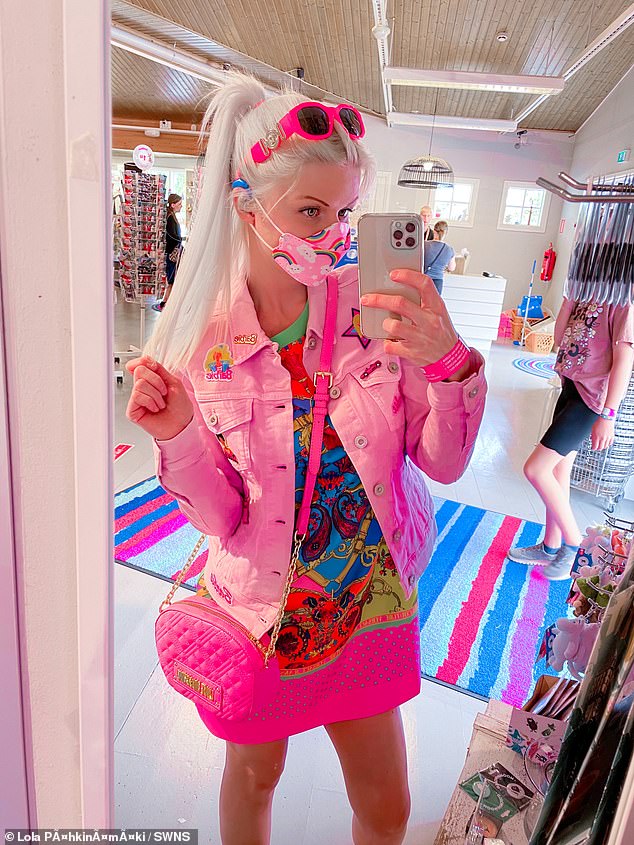 Lola, pictured as she is today, says her image is inspired by Barbie. She was hospitalised in 2019 after injuring her shoulder and spinal cord left her having to learn to walk and talk again

Lola fell whilst carrying too many bags when leaving work and was hospitalised for three months.

The influencer, who was then 27, injured her shoulder and spinal cord, which affected her brain.

She had to learn to walk and talk again.

Lola said: ‘My life has changed unimaginably since suffering a brain injury.

‘I lost my ability to walk and was in a wheelchair for three months. I had to learn to read and write again.’

While she was in hospital she was hit with Covid-19, which she said ‘completely savaged’ her lungs.

It was whilst she was in hospital that Lola recognised her anorexia was vulnerable to toxic relationships and a gym environment.

She said: ‘Since the injury, I can’t handle life the same way. It has destroyed my life but I had to stop fitness, which was a huge blessing in disguise. It has saved me from a toxic environment.’ 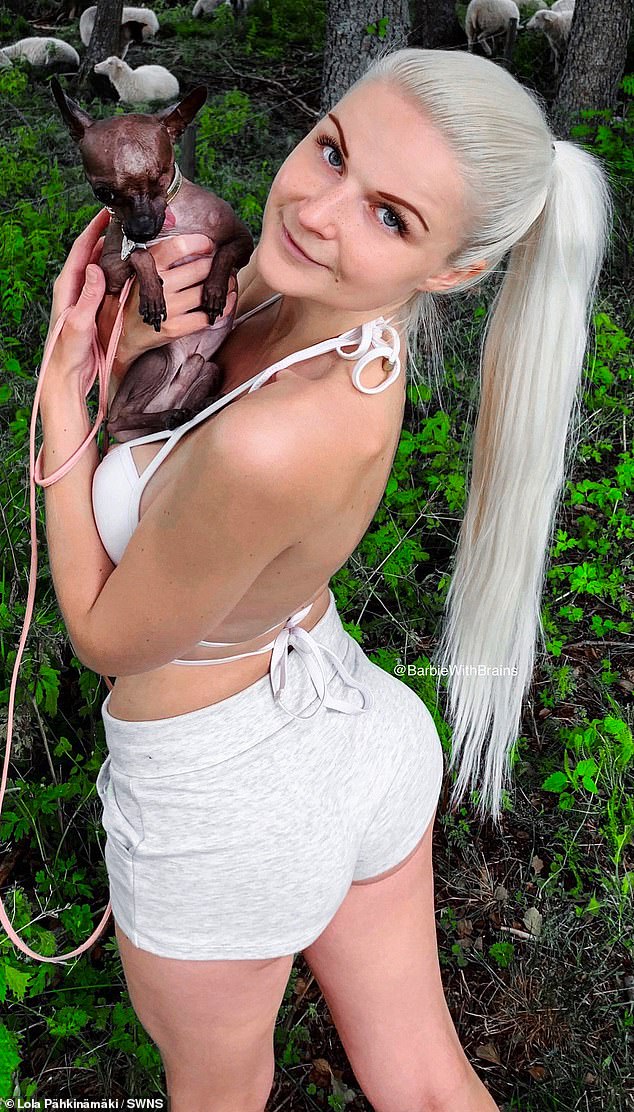 Lola is pictured here before her spinal accident at a healthy weight, before her mood was low and she started to lose weight quickly 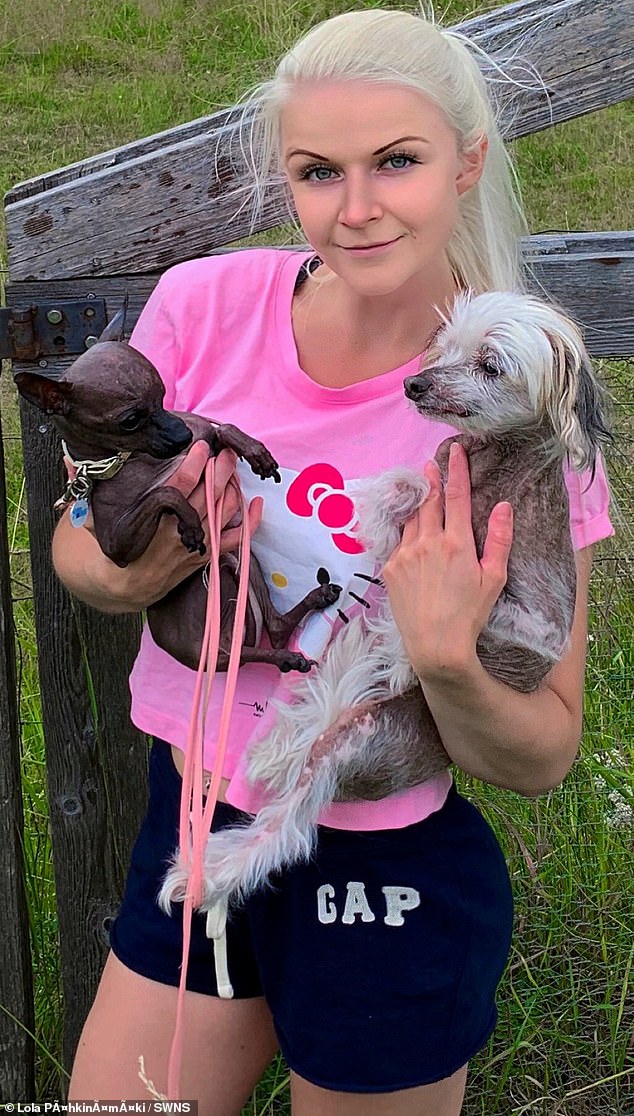 While she was a healthy weight for many years, she didn’t realise her mental health was being impacted by the gym until she suffered a spinal cord accident in 2019. This picture is taken before her accident

Since her injury she hasn’t entered a gym, except to do physio and she has stopped using her fitness Instagram account.

Lola now hasn’t seen a gym for three years and expresses that she doesn’t want to talk about eating disorders under a fitness account, as exercising can be a huge trigger.

She also recognised that toxic relationships were a trigger for her and is now embracing single life and self-love and says therapy has been a lifeline.

‘I’ve found over the years toxic relationships have been my main trigger,’ she said.

‘I was on a date two weeks ago with a guy and he kept talking about fat people because he was trying to make me feel bad about myself.

‘I felt too uncomfortable to leave but as soon as returned home I looked in the mirror and thought “am I really that disgusting?”

‘I then thought better and decided I wasn’t going to let a man bring me down.’

The influencer wants to show how eating disorders can affect your health for years to come, even after recovery.

Lola now suffers with fatty liver disease which can be triggered by malnutrition.

Overtime her liver function has worsened and she is hoping to get a transplant.

‘I looked horrible, I was yellow all over and I wanted to kill myself every day,’ she said

Anorexia is a serious mental illness where a person restricts their food intake, which often causes them to be severely underweight.

Some sufferers may experience periods of bingeing, followed by purging.

Sufferers often have a distorted view of themselves and think they are larger than they really are.

Untreated, patients can suffer loss of muscle and bone strength, as well as depression, low libido and menstruation ceasing in women.

Behavioural signs of anorexia include people saying they have already eaten or will do later, as well as counting calories, missing meals, hiding food and eating slowly.

As well as weight loss, sufferers may experience insomnia, constipation, bloating, feeling cold, hair loss, and swelling of the hands, face and feet.

‘Because I was in hospital unable to move I gained weight and this was triggering, I felt miserable.’

Lola has to eat a strict diet and has to avoid certain foods such as potatoes.

She has overcome the worst of her mental and physical demons and has come out the other side to help others.

She added: ‘I don’t believe we ever fully recover from eating disorders, we just learn to live it.

‘Food isn’t my trigger, I can see people eating it’s actually a booster for me.

‘I suffer with a bad anxiety disorder and have depression so my mental health can impact my eating habits.’

Often she gets comments on her social media calling her ‘fat’ or ‘too thin’ but she chooses to ignore them.

Since she has stopped going to the gym, Lola has also stopped weighing herself which has been hugely beneficial for her health.

She listens to her body and accepts that not everyday will be the same.

Some sufferers of eating disorders use meal prep as a way of controlling their diet yet for Lola it helps her listen to her hunger.

‘I box all my meals and will grab a portion to eat and if I’m still hungry, I will grab another,’ she said.

‘If I have an empty fridge I just won’t eat. It’s a form of healthy control, I don’t measure my food or calorie count.’

She is currently in the process of making a documentary about her life to inspire others.

‘I find myself being very positive person – helping others gives me joy and keeps be going,’ she said.

She coaches women with eating disorders and helps them identify their triggers and talk about their issues.

She buys clothes she loves in two different sizes – one in a smaller size and one in a larger size so it isn’t triggering when something feels too tight, she calls this ‘clothing prep’.

‘I’m so positive because of of all I’ve been through and what I have overcome all by myself,’ she said.

Harrison Ford, 80, stars in FIRST TRAILER for Indiana Jones and the Dial of Destiny