A lack of sleep can make you selfish, study suggests

Parents of newborn children and shift workers know all too well how a bad night’s sleep can make them grouchy.

But now sleep experts at the University of California, Berkeley, have found a lack of shut eye can also make people selfish.

Even losing just one hour of disruption to someone’s normal sleeping pattern appears to make them less generous to others.

In one analysis, researchers found charitable donations dropped by 10 per cent in the week after Daylight Saving Time came into effect in most US states.

But this decrease was not observed in states that did not put their clocks forward by an hour.

Brain scans of dozens of volunteers also found that being sleep deprived for 24 hours dampened parts of the brain responsible for empathy.

Questionnaire answers also suggested that people who slept less were significantly less likely to want to help others.

‘Helping is a core, fundamental feature of humankind,’ he added. 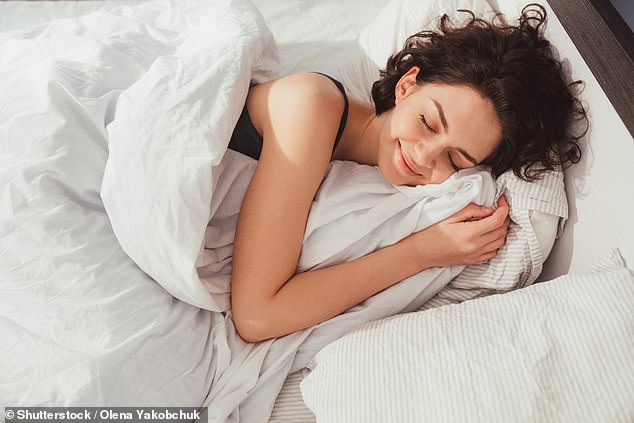 Sleep experts at the University of California, Berkeley, have found a lack of shut eye can also make people selfish 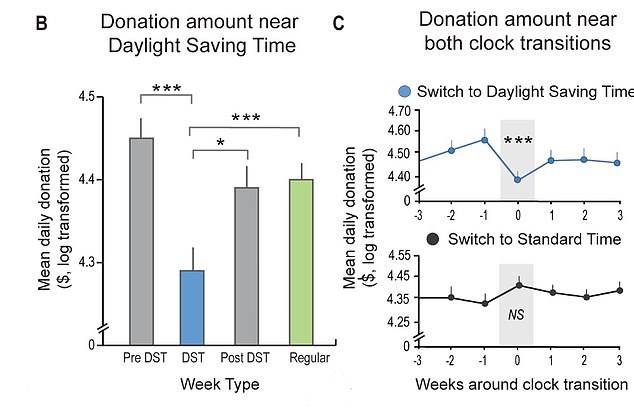 Researchers found there was a 10 per cent drop in the number of donations made after the switch Daylight Savings Time in the US, which reduced people’s sleep by an hour. Left: Daily charitable donations before the change (left grey), in the week after (blue), the month after that (right grey) and over the year (green). Right: How donations changed in the weeks before and after DST and the switch to standard time

HOW MUCH SLEEP SHOULD I GET?

Most adults need between six and nine hours of sleep every night.

Going to bed and getting up at a similar time each night programmes the brain and internal body clock to get used to a set routine.

But few people manage to stick to strict bedtime patterns.

To get to sleep easier, the NHS advises winding down, such as by taking a bath, reading and avoiding electronic devices.

The health service also recommends keeping the bedroom sleep-friendly by removing TVs and gadgets from the room and keeping it dark and tidy.

For people who struggle to sleep, the NHS says keeping a sleep diary can uncover lifestyle habits or activities that contribute to sleepiness.

The NHS recommends adults need seven to nine hours sleep every night, while children need between nine and 13 hours.

Previous studies have also shown missing out on sleep can lead to a host of health problems including high blood pressure, dementia and diabetes.

Researchers conducted three experiments for the latest research, which was published in the open-access journal PLOS Biology.

They compared the number of donations made before and after Daylight Savings Time, which happens on the second Sunday in March for most US states.

The number of donations made dropped by a tenth in the week after the clocks changes. There was no significant change at any other time in the year, suggesting the loss of an hour was to blame.

Another experiment used an online questionnaire to see how generous people felt based on their quality of sleep.

Some 171 participants were asked to fill out sleep diaries for four days – including how long they slept and whether it was interrupted.

They also answered daily survey questions to assess their empathy and generosity.

For example, one question asked whether they would help if a stranger stopped them to ask for directions while they were in a rush to work.

Results showed those with poorer quality sleep in general were significantly less generous than people who slept better.

And people were also less likely to want to help people in the days when they had worse sleep.

Finally, 23 volunteers aged 18 to 26 were brought into the lab in California for closer monitoring on two separate occasions.

In one test, the participants were invited to the lab when they were fully rested and given a questionnaire that tested their empathy.

Participants were monitored using a wristwatch in the days before they took part in the experiment to make sure they came in well rested.

In a second test, they were kept awake in the lab for 24 hours from 9.30pm, when they were not allowed to drink alcohol or caffeine but could watch TV or browse the internet.

They were given a similar questionnaire after the experiment to test their generosity.

Researchers found 78 per cent of people showed a reduction in their desire to help others.

MRI scans taken at 10am the following day showed people who had not slept for 24 hours had significantly less activity in the social cognition network of the brain.

The area is known to help people empathise with others and help understand how they are thinking and feeling.

Share
Facebook
Twitter
Pinterest
WhatsApp
Previous articleStrictly's Lisa Armstrong puts on a leggy display in a she joins Strictly professionals for filming
Next articleCarol Vorderman, 61, puts on a busty display in a tight black dress as she heads to dinner
RELATED ARTICLES
Heath