Accounting giant PwC fined £2.5m for its audit of BT

Accounting giant PwC fined £2.5m for its audit of BT after a fraud at telecom giant’s Italian arm

PwC has been fined £2.5m for its audit of BT after a fraud at the telecom giant’s Italian arm.

The accounting giant failed to properly challenge BT’s 2017 results, the Financial Reporting Council (FRC) said, even after the discovery of the fraud a year earlier wiped billions off BT’s value and prompted a criminal trial which is still ongoing. 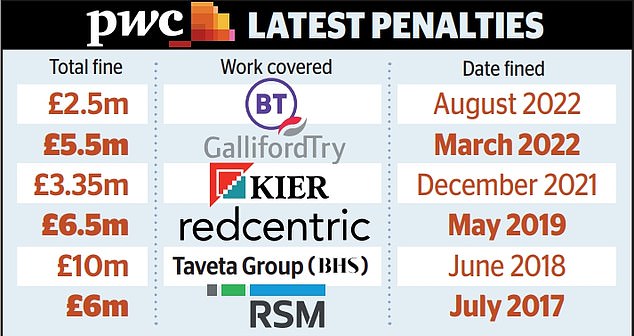 The penalties were reduced to £1.75m and £42,000 respectively for PwC’s cooperation and admissions.

The wrongdoing at BT happened in 2015 and 2016. Prosecutors in Milan claimed BT Italia and a network of staff sought to inflate revenues and conceal losses of £250m in a sophisticated fraud.

When the scandal came to light in 2016, after a whistleblower alerted bosses, BT adjusted its financial statements by around £513m.

While the FRC did not say these results were misstated, or that the total sum of the adjustments was wrong, it did find that PwC had failed to apply the ‘necessary professional scepticism’ when checking the numbers. The paper-trail which showed how PwC approached its audit work was also inadequate, the FRC added.

Of the 23 originally accused of fraud at BT, a former manager of BT Italia has already been jailed for a year, while the ex-chief executive, Gianluca Cimini, died two years ago.

A spokesman for PwC apologised for not meeting the ‘required standard’, adding: ‘We have made significant investment in strengthening audit quality in recent years, which has been recognised in improved quality inspection results. We remain committed to maintaining and building on this progress.’