ERASURE: Day-Glo (Based On A True Story) (Mute)

Kasabian have always walked a tightrope between lad-rock and the more esoteric tastes of songwriter Serge Pizzorno.

Their appeal was rooted in the musical tension between Pizzorno and ex-singer Tom Meighan, who was the band’s energetic focal point onstage.

That partnership came to an abrupt end in 2020 when Meighan left the group by mutual consent a day before pleading guilty to assaulting his then-fiancée (now his wife) Vikki Ager.

The former frontman was sentenced to 200 hours of community service and entered rehab for alcohol addiction. He has since moved to Cornwall and launched a solo career.

The rest of the band decided to carry on without him, with Pizzorno becoming lead singer.

There are nods to the crowd-pleasing Britpop swagger of old, but it’s Pizzorno’s more eclectic leanings that hold sway.

He doesn’t hold back. He made an experimental solo album, The S.L.P., three years ago and revisits similar styles here. 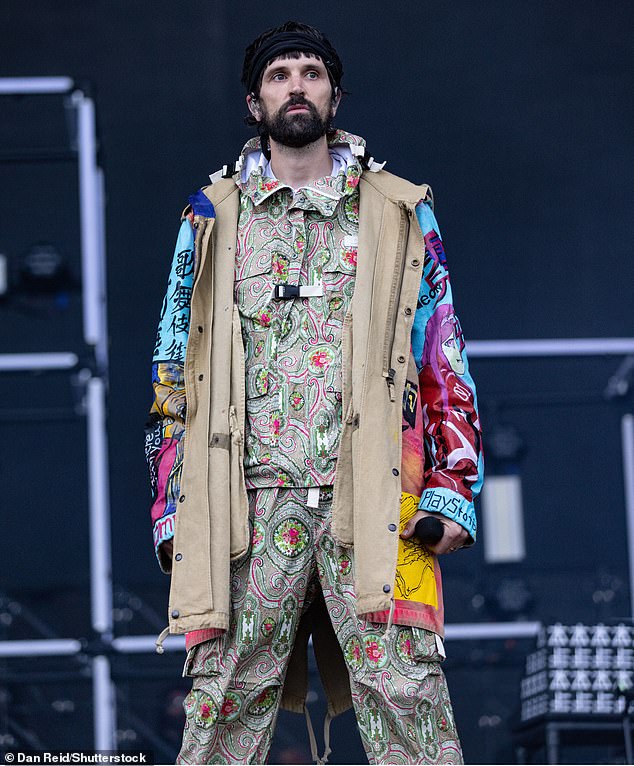 There are guitar-driven rockers, rap numbers, ambient interludes and even a folk tune. Many of the song titles — Scriptvre, Alygatyr, Stargazr — take liberties with the English language.

In covering so many bases, there’s a sense the new frontman might be trying too hard in the wake of Meighan’s departure and The Alchemist’s Euphoria will leave many fans scratching their heads.

Where they once modelled themselves on Oasis and Primal Scream, their closest bedfellows now may be Radiohead.

There are moments to savour. Scriptvre opens like an East Midlands take on the Red Hot Chili Peppers’ 1991 single Give It Away before developing into a psychedelic rocker with Eastern strings and quirky synths.

The Wall, a big, emotional ballad about overcoming adversity, was aired during the BBC’s coverage of the Lionesses’ Euro 2022 win.

TRACK OF THE WEEK

Ten years on from the breakthrough hit Call Me Maybe, the Canadian turns her attention to online dating disasters on a disco-ready banger. A new album, The Lonliest Time, arrives in October.

Serge imposed strict rules in the studio. There were to be no lockdown songs (a good move) and everything was to be kept short and sweet.

He also vowed not to write about Meighan’s departure and its impact — although there is a lot of stuff about staying resilient and moving on. ‘Whatever don’t kill you makes you stronger,’ he sings at one point. The less predictable moments are hit and miss.

T.U.E. — short for The Ultraview Effect — and Stargazr are rambling, sci-fi pieces that would have sat more comfortably on a solo album, but Letting Go is a lovely folk ballad.

So how does Pizzorno shape up as the main man? He’s a proficient vocalist, though he seems most at home on songs where he can rap as well as sing.

As a natural sideman, he’s better at being Richards than Jagger, but this is still a solid start. It reiterates his artistry — but also his restlessness and lack of focus.

‘People want to dance around and have energy. I didn’t want an album where two songs are bangers and you skip the rest.’

The lead guitarist and singer, 27, is as good as her word on Unwanted, the band’s third album and a 13-track fusillade of crunching power chords and soaring harmonies leavened with a handful of sensitive ballads. 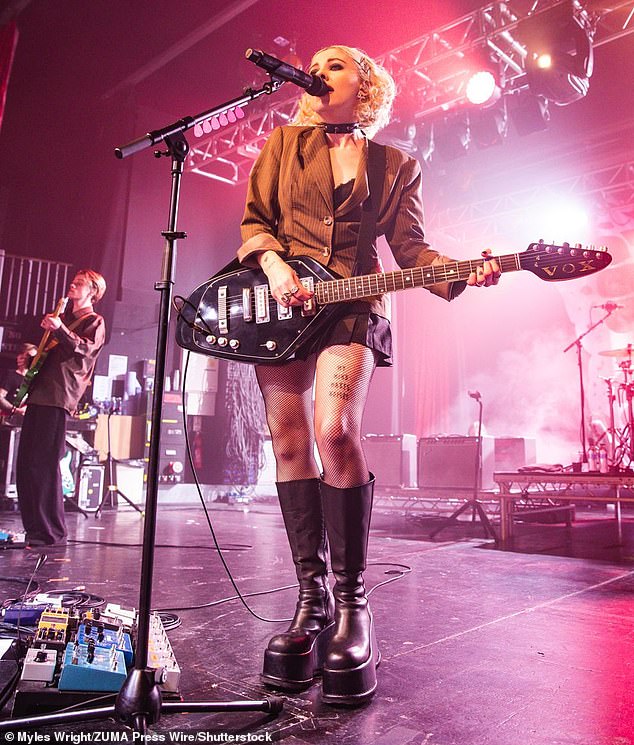 The record was made in Los Angeles with Blink-182’s producer Zakk Cervini, suggesting the band already have their sights set on conquering the States.

There’s nothing groundbreaking here. Pale Waves look to outfits such as Green Day and Paramore for inspiration; and their choruses wouldn’t sound out of place on an Avril Lavigne album.

But Unwanted is played with spirit and Baron-Gracie opens her heart on soul-searching lyrics.

Writing about her relationships as a gay woman, she strikes an optimistic note on Clean (‘You’re the one girl that I just can’t get enough of’), but otherwise the songs are often tales of woe.

‘Wish I could go back to the night when I met you … so I could tell you to go to hell,’ she sings on Alone; while on Without You, she laments: ‘My tears could fill an ocean.’

If that sounds downbeat, it isn’t … entirely. With pop-punk back in vogue across the Atlantic thanks to Olivia Rodrigo and a revitalised Lavigne, there’s now a home-grown band ready to make their mark.

ERASURE harked back to their Eighties heyday on 2020’s The Neon, an excellent album that reiterated keyboardist Vince Clarke’s melodic genius. Its retro synth-pop even lent itself to an entertaining re-mix album in 2021. Using the same source material for a third time is pushing it, though.

Not that Day-Glo bears much resemblance to its two predecessors. Faced with unexpected studio time in lockdown, Clarke re-jigged some of The Neon’s backing tracks and sent them to singer Andy Bell, who supplied ad-libbed vocals and choral chants. There are moments of silky beauty. But — the dance grooves of Inside Out aside — this feels like a stop-gap.

Second-last of Gilbert and Sullivan’s great run of Savoy Operas, Utopia Limited is not often staged — the resident company at the annual G&S Festival has done it only once before.

I am with George Bernard Shaw, who loved it. Yes, it has faults: Act 1 is too long and wordy, although as they are Gilbert’s words, they are mostly droll; and Act 2 is wrapped up with almost indecent haste.

Seeing the Pacific island of Utopia being made into a limited company, at the behest of the King’s Girton-educated eldest daughter Zara, is hilarious, especially the Cabinet meeting to end all such gatherings in Act 2. 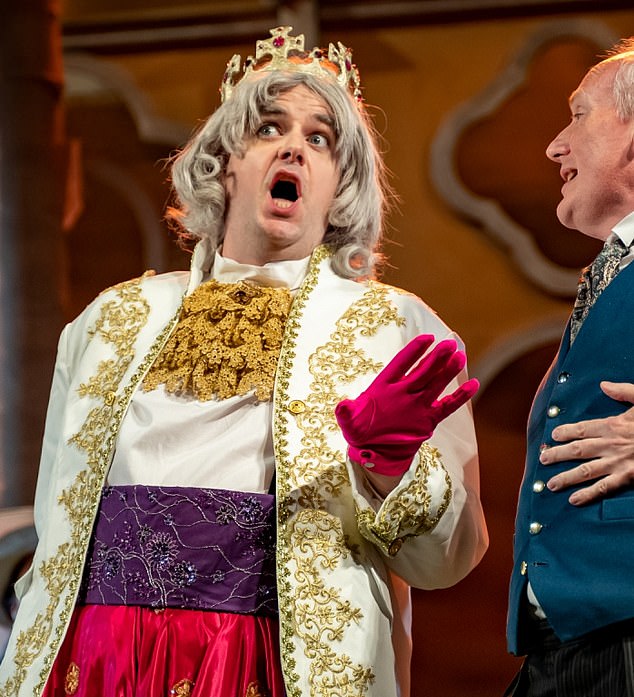 No expense has been spared, particularly in the costume department: all the woman especially are gorgeously turned out.

King Paramount, sonorously voiced by Ben McAteer, could do with a better wig and throne, but the stage is always interesting.

Monica McGhee is a lovely, suitably steely Zara and as Captain Fitzbattleaxe — one of the ‘Flowers of Progress’ that she enlists for her anglicisation programme — Anthony Flaum copes well with being asked by the authors to sing badly!

John Andrews conducts with vim, the National Festival Orchestra plays stylishly and the choruses and other big scenes go with a swing.

This production really should be seen as the festival transfers to Harrogate.

Utopia Limited will be staged at the G&S Festival, Harrogate, this Sunday and Saturday, August 20; gsfestivals.org.