With negotiations still ongoing over the Northern Ireland Protocol, the debate is running between various communities over the current situation. Unionist and Loyalist supporters have claimed the Protocol essentially cuts off Northern Ireland from the rest of the UK, while Republican movements are calling for a referendum on a united Ireland.

Taking to Twitter, and starting the war of words, one journalist took aim at Prime Minister Boris Johnson, the ongoing situation in Ukraine and the fall out of the impact on Northern Ireland.

Mary Riddell said: “Beyond belief that Liz Truss is threatening a trade war with EU over NI Protocol.

“As slaughter engulfs Ukraine, European unity is vital to defence and security.

“UK was mad to leave EU, and it is insane for the dreadful Boris Johnson to open a wider gulf instead of healing rifts.” 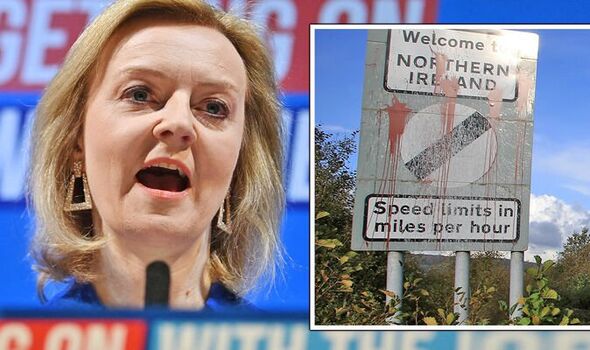 Devonviews said: “Why was it mad, the EU have proven themselves to be an aggressive organisation, taking sides in a politically sensitive Northern Ireland.

“Were you outraged by this or did you celebrate it.”

A former MP also added to the debate.

Kate Hoey, now Baroness Hoey of Lylehill and Rathlin, said: “Clearly you have not read the Protocol otherwise you would see EU signed up to the use of article 16 when needed.

“Why would there be a trade war when invoking a clause in the agreement is legal.

“Are you sure you are not just looking for excuses to criticise the Government?”

READ MORE:
POLL: Was Boris right to say Britain ‘wanted to be free’?

Devonviews said Britain was NOT mad to leave the EU (Image: Twitter)

Mark Harris continued by saying: “Bizarre. The only threats I have read about are the EU threatening a trade war if A16 – a legitimate part of the protocol – is invoked.

“The UK has not threatened new tariffs on EU products. Even when the EU was raising A16 during their vaccine issues.”

Speaking of the so-called trade war, Michael de Monte said the induction of Article 16 would not be an illegal move.

He said: “In reality, Liz Truss has not suggested triggering a trade war or any other sort of war, she has suggested activating one of the self-amending clauses in the Northern Ireland Protocol, in full compliance with the Protocol.”

They said: “We weren’t mad to leave the EU but good to know the name-calling is still a thing.

“NATO is the bulwark of our defence, it was never the EU.”

Loyalists are unhappy with the NI Protocol (Image: Getty)

And finally, slamming the EU on its support for Russia, Bea Johnson said: “The EU funds the slaughter: $600bn per day to Russian for its energy, having chosen to run down its own production.

“It also provided the arms that Putin is using to destroy Ukraine, circumventing international sanctions to do so.

“Why would we want to unite with it?”

Reports suggest Ms Truss, who now leads the Brexit negotiation team following the resignation of Lord David Frost, is understood to be frustrated at the current progress being made in talks over the Protocol.

An unnamed source, speaking to The Times, said Ms Truss wanted to force a settlement before elections for the Northern Ireland Assembly in May.

Do you think the Government should trigger Article 16? What will happen to Northern Ireland? Is a united Ireland on the cards? Let us know your thoughts on these questions by CLICKING HERE and joining the debate in our comments section below – Every Voice Matters!

Republicans are pushing for a united Ireland (Image: Getty)

To do that, she wants Prime Minister Boris Johnson to warn the European Commission that Britain would trigger a suspension of parts of the Brexit divorce deal through the so-called Article 16 before then, the paper reported sources as saying.

However, there has been friction about how this applies in practice – especially for goods intended to remain within Northern Ireland – as well as over the arbitration role of the EU’s European Court of Justice.

Disgraced paedophile Gary Glitter, 78, to be released from prison within days