Andy Bell has a message for investors paralysed by the Russia-Ukraine conflict: Don’t panic. The co-founder of AJ Bell, one of Britain’s biggest investment websites, has seen a few meltdowns in his time. And even though markets are on a rollercoaster ride after Russia’s invasion of Ukraine, his advice is that investors should not lose their nerve and make rash decisions.

‘It’s understandable that UK investors might be concerned about what impact the conflict might have,’ he says. ‘But specific exposure to Russia is likely to be a tiny proportion of a well-diversified portfolio.

‘Investors should check they are comfortable with their investments, but in most cases, there will be no need to do anything.’ 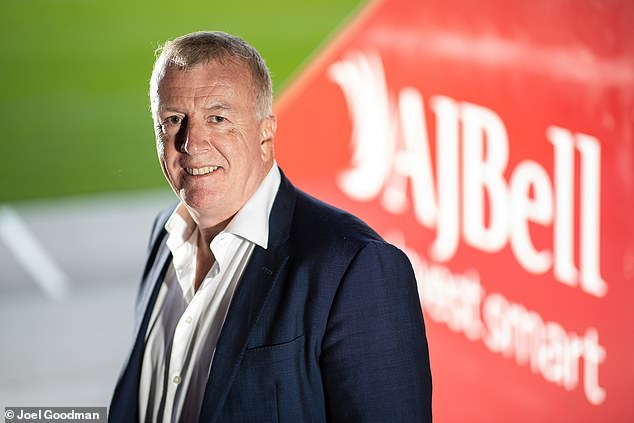 His comments will reassure those who watched in trepidation as the FTSE100 plunged 4 per cent, before rebounding within days then falling again last week.

Bell, a multi-millionaire whose company has £75.6billion of assets under management, keeps an eagle eye on the market after building the website that he started with his friend Nicholas Littlefair.

Beginning in 1995 with a £10,000 loan, it is now one of the UK’s most popular brokers for individuals looking to invest in shares and funds.

AJ Bell is itself listed on the FTSE250 index and has more than 398,000 customers. But Bell is not content with standing still.

He has already seen a new wave of so-called ‘armchair’ investors dip their toe in the water during the pandemic. He now wants to recruit a new generation who want to put their cash to work.

In the next few months, he will launch Dodl, an app aimed at novice investors.

‘We’re hoping that’ll help us move further into the younger, less experienced investor group,’ he says, adding that dealing commission will be a ‘very low’ 0.15 per cent a year.

‘Investments are back as an acceptable topic of conversation now. When people saw there was going to be a lockdown and easyJet shares were affected, it made sense to people.

‘They can then start taking a view, ‘I think we’re coming out of lockdown now, so I think those Ryanair or easyJet shares are going to start coming back’.

He’s more of a family man, he says. But the 55-year-old admits he has similar conversations with his wife and four grown-up children around the dinner table.

Lockdown has ended and people are returning to the office. But Bell – whose main rival is Hargreaves Lansdown, which has 1.6million clients – is optimistic he can attract those who want to invest over the long term, not just wannabe day-traders making a quick turn.

He says: ‘The state did a great job stepping in to help people, but the amount of money that cost has probably been a wake-up call for a lot of people who think, ‘Actually, I need to look after my own financial future.’ Bell himself needn’t be too anxious – his net worth was an estimated £360million in 2019 and he still owns about 22 per cent of the investment site.

AJ Bell dished out nearly £40million in dividends in December after profits rose and 87,000 new customers jumped on board in the year to the end of September.

Unlike most other stock market listings, Bell ensured that small retail investors could buy shares in its Initial Public Offering (IPO) alongside big pensions funds and City institutions.

‘We made a conscious decision to make the shares available to our customers. I think we’d have been shot had we not done that,’ he quips.

‘I think then the flip side is we’ve got to make sure that retail investors don’t just get exposed to the weak IPOs, where the only reason for bringing them in is because they have not received sufficient demand from the institutions. The whole system is gamed to exclude retail investors.

‘For them to be included, there’s got to be a really insistent chief executive who says, ‘I don’t care what you say, Mr Bank Adviser, we are opening our IPO to retail investors’ ‘. Experts argue the exclusion of individual investors from the London stock market is one reason why some fast-growing companies are choosing to list overseas – to have a bigger and broader pool of shareholders.

Last month, the London stock market was dealt a blow when the owner of £30billion British chipmaker Arm said it would float the Cambridge-based company on the Nasdaq in New York. ‘It’s a shame that any British company would want to float in the US, as opposed to London,’ he laments.

But he points to the battering some tech stocks have had in the UK, saying: ‘I can see why they might be persuaded to go to the US.’

Is investing in Arm a topic of conversation around the Bell dinner table? He laughs. ‘No, I’ve been trying to drag my children back from the precipice called crypto.’

But he adds: ‘The UK is quite conservative, it’s dominated by pension funds, who naturally are conservative investors.

‘We should be encouraging those firms by taking away any barriers for listing in the UK and then try to get a range of institutional investors that really do appreciate high growth tech stocks.’