Alan Davies has been branded a ‘hypocrite’ after he waded into the Chris Rock/Will Smith Oscars scandal.

Since the shocking scenes on Sunday night’s ceremony, in which Will slapped Chris for poking fun at Jada Pinkett Smith’s bald head, several celebrities have offered up their hot take on the matter.

However, viewers were quick to point out that while Alan had been quick to condemn Will, he himself had assaulted a man in the past. 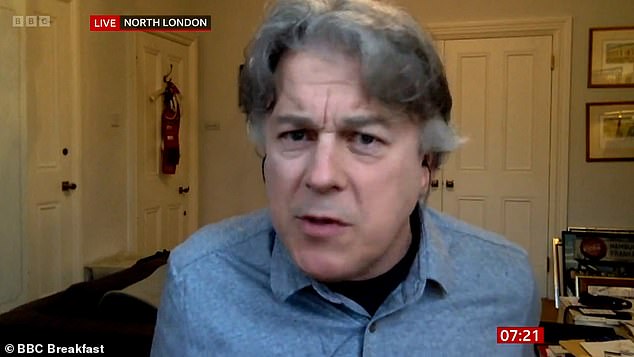 ‘You’re a hypocrite’: Alan Davies went viral for labelling Will Smith’s Oscars meltdown ‘unreasonable’ during Tuesday’s BBC Breakfast – as fans reminded him of his own violent past

The TV presenter made headlines in 2007 when he bit homeless man Paul McElfatrick on the ear following a night of drinking.

Weighing in on Oscars slap-gate, Alan said on BBC Breakfast: ‘I have a little difficulty with people saying that they’re offended and getting upset and wanting comedians to moderate what they say.

‘I’m sure that’s Chris Rock’s instinct. I’m a fan of Chris Rock, I’ve got tickets to see him at the Albert Hall in May. So I’m an apologist for him.

‘But, I don’t think he meant to reference that and I don’t think the reaction was in any way reasonable. So yeah, I’ll stick up for the comic I’m afraid.’ 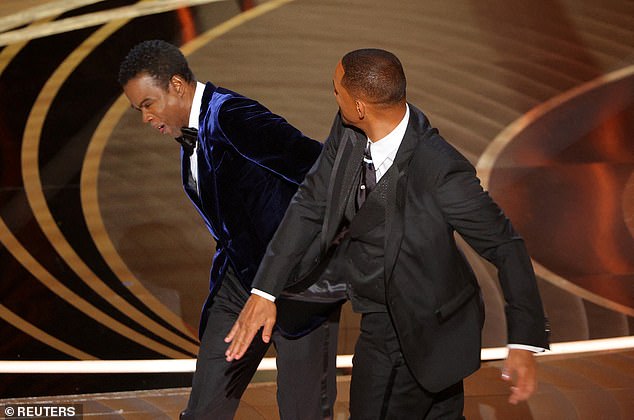 Shocking: After Will Smith slapped Chris Rock during Sunday’s Oscars ceremony several celebrities have offered their hot take on the incident

Taking to Twitter after the segment, fans were quick to call out Alan for his remarks, given his history.

‘Why is bbc breakfast speaking to Alan Davies about Will Smith and Chris Rock incident. He violently attacked someone by biting their ear in the past! Hypocrisy.’; ‘But you can attack a homeless man for literally nothing?’

‘As the Smith / Rock story rumbles on, someone decided it was a good idea to ask *cough* comedian Alan Davies for his opinion. This is the same Alan Davies who once got annoyed at a tramp and bit his ear. Perfect.’; 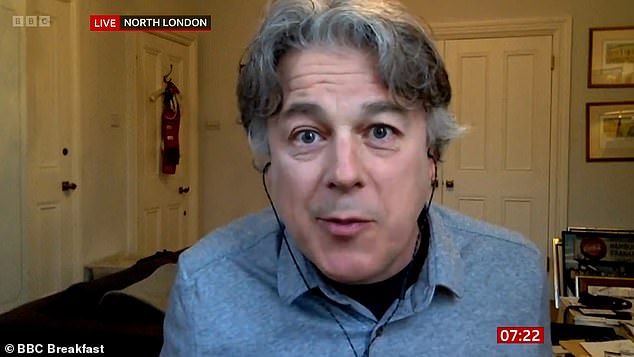 Alan said of slap-gate: ‘I don’t think the reaction was in any way reasonable. So yeah, I’ll stick up for the comic I’m afraid’

‘I generally love Alan Davies but what the hell qualifies him to talk on BBC news about what happened at the Oscars?’; ‘I love Alan Davies, but I genuinely couldn’t think of anyone less relevant to be asking their opinion on this matter.’;

‘See Alan Davies been chipping in on the Will Smith thing , with his horrendous track record he should keep it zipped I would suggest Hypocrite’.

Yet others were quick to leap to his defence, including fellow comedian David Baddiel, who reasoned: ‘There seems to be a slightly weird sense on here that the last people who should be allowed to have an opinion on a comedian being hit for doing a joke are comedians.’

Alan D has been under the ‘this you?’ cosh for having some opinions today. ‘This you?’, so beloved of hypocrisy-hunters on here – and trust me, I know my meme, and expect to see it below – will eventually lead to no-one being asked their opinions, except toddlers.

And even then, someone will post a picture of them as a baby in a s****y nappy, and say ‘This you?’ 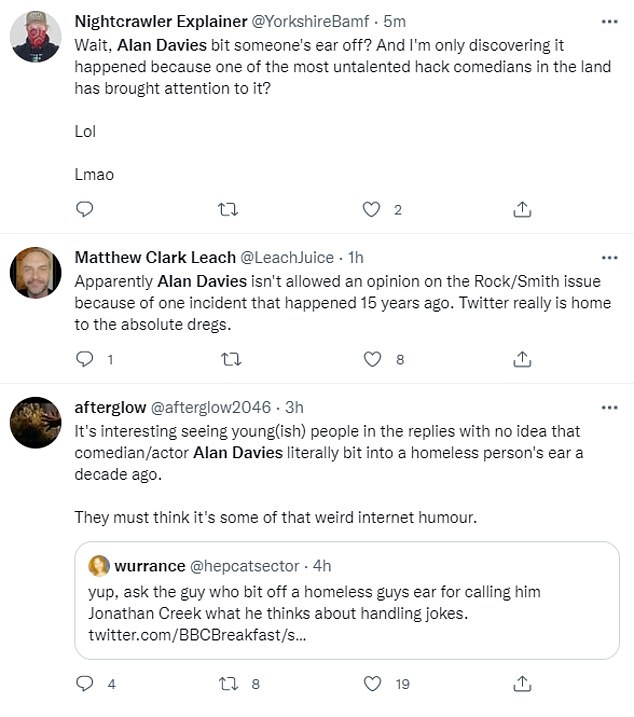 Not impressed: Taking to Twitter after the segment, fans were quick to call out Alan for his remarks, given his history with violence

Al Murray was quick to add: ‘Strangely enough I’m in the don’t hit comedians camp’, while Caitlin Moran wrote: ‘Mate, I’ve just spent two days monitoring it, and literally EVERY take is deemed wrong by someone. The Hot Take Panopticon has reached the singularity.’

Other fans expressed their support for Alan by posting: ‘Apparently Alan Davies isn’t allowed an opinion on the Rock/Smith issue because of one incident that happened 15 years ago. Twitter really is home to the absolute dregs.’;

‘I really don’t think it was Alan Davies’s wisest decisions to go on BBC Breakfast earlier and comment on the Oscars debacle….Social media is very unforgiving.

‘Alan Davies brace yourself for the backlash’; ‘Alan Davies in shock ‘I have an opinion and I’m expressing it’ Horror situation…’; ‘Calm down twitter, its OK to have different opinions you know.’ 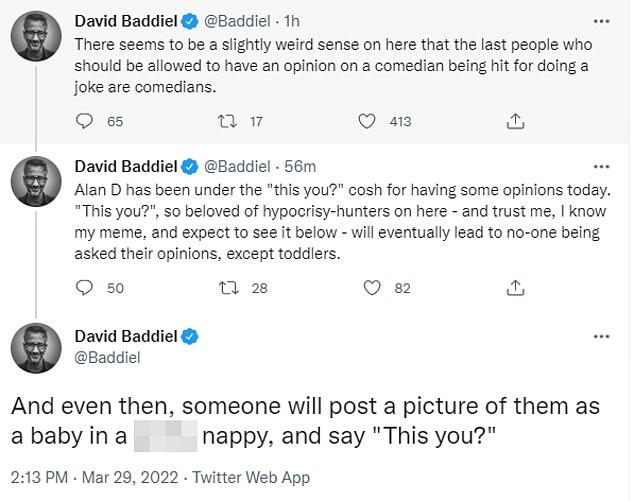 Hitting back: Others were quick to leap to Alan’s defence, including fellow comedian David Baddiel, who reasoned that comedians were the best ones to speak on the matter

In 2007, Alan bit a homeless man’s ear and had to be dragged away by friends after the vagrant approached him  and referred to him by the name of his character, Jonathan Creek, instead of his real name.

The victim, Paul McElfatrick, later said of the incident: ‘He almost spat the words, “My name’s Alan. You know my name – Alan. What’s my name? It’s Alan.”

‘Then he suddenly went for my left ear. It was incredibly painful. I shrieked and my eyes were watering. He hung on and drew blood.’

He said the biting continued for about 13 seconds, adding: ‘I was shaking with shock afterwards. I still can’t sleep on that side of my head.’

Alan later apologised for his actions, saying he was ‘upset and emotional’ after attending the funeral of Jonathan Creek producer, Verity Lambert.

Seven years later, Alan was accused of assaulting another man – a climbing instructor at a leisure centre – which Alan has denied.

The instructor claimed that Alan had ‘grabbed him by the throat’ after he tried to walk past the family on the stairs.

Alan later tweeted his version of events, writing: ‘This idiot pushed my 4-year-old old over because he was ‘late’. When I pushed him back, he screamed ‘Assault!’.

‘It was unbelievable. Several witnesses told the police that he was the aggressor and had to restrained by staff.’ 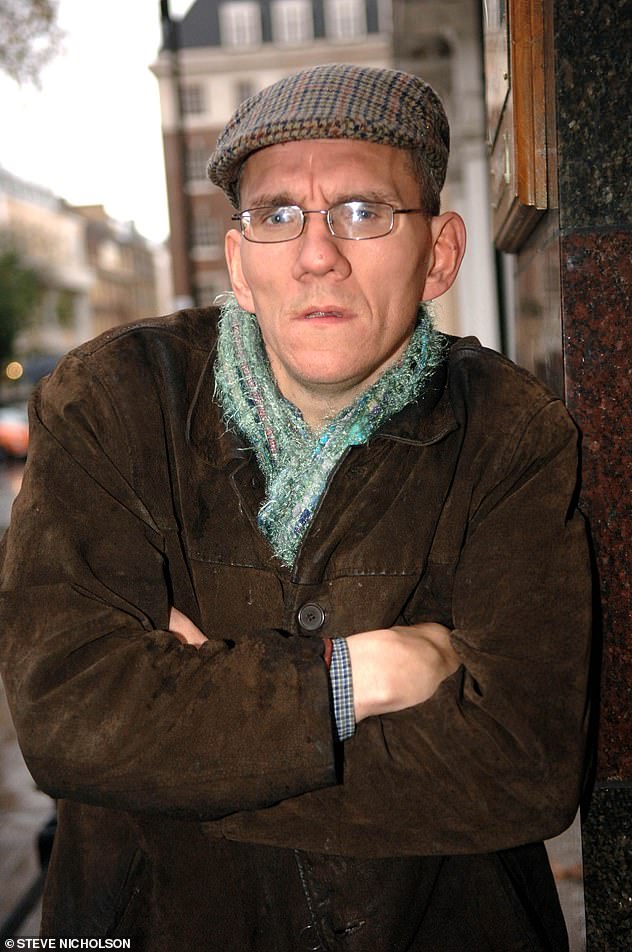 Ordeal: The TV presenter made headlines in 2007 when he bit homeless man Paul McElfatrick (pictured) on the ear following a night of drinking

Alan has also admitted to vandalism in the past, revealing he once poured his own urine through the letterbox of the Conservative Party headquarters.

He said on Dave’s Unforgivable: ‘I once wilfully and deliberately vandalised the Conservative party headquarters. I must say, not the main office, it was the Loughton branch in Essex, which they had recently renamed Thatcher House.

‘They had empty milk bottles on the doorstep at Thatcher House and I weed in one and poured it through the letterbox.’

Meanwhile, Will has divided opinion with his violent reaction to Chris’ jibe at his wife, with the Academy coming under pressure to strip the star of his Best Actor Oscar.

He has since apologised for his actions, saying his behavior was ‘unacceptable and inexcusable’ and left him ’embarrassed’.

Chris has not responded to Will’s apology, or commented on the incident. 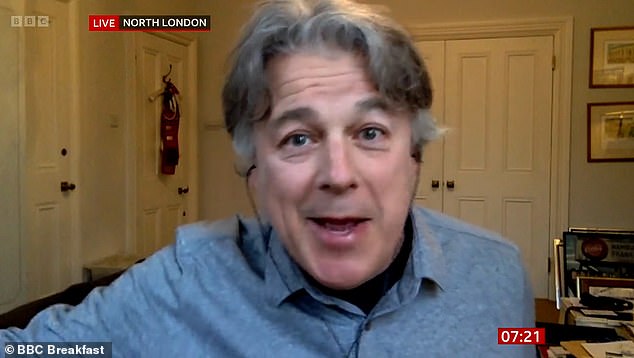 Shocking: Alan has also admitted to vandalism in the past, revealing he once poured his own urine through the letterbox of the Conservative Party headquarters