Here is an imaginary story to conjure with. Ford announces that it is planning to move the manufacture of components for electric cars from Halewood in Liverpool to Cologne.

The headline of another blow from Brexit – which the Office for Budget Responsibility (OBR) forecasts is costing the UK economy £100billion a year – would have written itself.

Reality is the other way round – with Ford stepping up its investment in the UK by £150million. 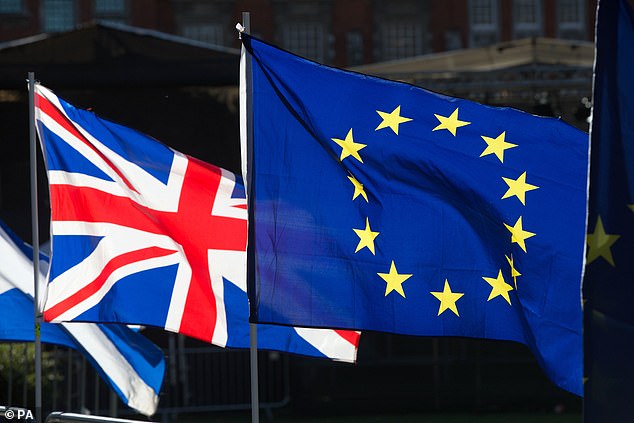 Misleading: The Office for Budget Responsibility forecasts Brexit is costing the UK economy £100bn a year – would have written itself

It is forecasting that by 2026 two-thirds of the components for all Ford electric vehicles in Europe will be made in the UK.

That, one might say, will make little difference given the Brexit tsunami predicted by the OBR, the Bank of England and countless others, and presented as an inalienable truth.

One Sunday newspaper gleefully declared last week that Brexit must be a failure because Britain’s ‘landmark’ trade deal with Japan did not produce the £15billion boost predicted when signed by Liz Truss.

But hang on a moment. The year in question has been among the most disrupted of modern times as a result of logistics bottlenecks, Covid restrictions in Japan for most of the period and Russia’s war on Ukraine.

Moreover, physical trade is only a fraction of the relationship between Japan and the UK. Tokyo is a big inward investor in the UK and is planning to devote a substantial part of its £13.2billion investment in vehicle electrification in Sunderland.

And the City of London, global home to most of Japan’s banks, is a big player in foreign exchange, derivative and other financial markets. The trouble with much of the data bandied about is that it doesn’t give the full picture.

Trade figures are fantastically unreliable, often subject to big revisions. Earlier this week I was among those invited to a McKinsey briefing on how UK businesses can go for growth amid economic uncertainty.

It was fascinating stuff, pointing out, for instance, how UK pension funds do very little to back the FTSE by investing just 2 per cent (yes, 2 per cent) in British-quoted companies.

Tera Allas, McKinsey’s director of economics, offered a different perspective on the relevance of economic forecasts.

Labour couldn’t wait to pounce on recent growth forecasts from the OECD showing that the UK had among the worst prospects of the advanced countries.

In the numbers, she observed, the expansion difference between the UK and others was just 0.1 per cent, despite all the fuss.

This, she argued, was within a margin of error that could swing by several basis points either up or down.

Put another way, the OBR forecast of Brexit damage might be useful guidance– but it is not the King James Bible.

After all of that scepticism, it may seem contradictory to extract some optimism from a Bank of England survey.

Whisper it quietly and there looks to be a glimmer of cheer in the direction of prices moderating.

Businesses say that they have raised prices by 7.2 per cent in the year to November, which is the smallest amount since April.

Cost of living expectations among the broader public have also fallen from their highest point.

Interest rates have yet to peak, with markets predicting a further half a percentage point rise in the Bank’s base rate from 3 per cent to 3.5 per cent on December 15 after a three-quarter point rise last time out. The top may be closer than people feared.

Two of my enthusiasms, in no particular order, are a fondness for the town of my birth, Brighton, where I used to work as a deckchair attendant, and chocolate.

Both led me to the mistake of investing in hobby stocks. As my deckchair stand was adjacent to Brighton Pier, I couldn’t resist a little flutter in the shares of Brighton Pier plc, which subsequently halved in value.

Similarly, when Hotel Chocolat became a thing, I invested. It was going swimmingly until founder Angus Thirlwell made the classic error of thinking that because Americans are big chocolate eaters and speak the same language nothing could go wrong.

The outcome: a loss of £9.4million after the write-off of the cost of US store closures.

Shares which stood at 513p earlier this year are down at 147p.