ALEX BRUMMER: Putin takes Russia to the edge of a monetary precipice

Moscow on default watch: Putin has taken Russia to the edge of a monetary precipice, says ALEX BRUMMER

As co-author of an authoritative work on financial crises, the views of Carmen Reinhart are to be taken seriously.

The sanctions delivered against Moscow and the ‘voluntary’ withdrawal of a host of Western branded companies from Russia has delivered a devastating blow to the nation’s financial credibility.

But there is an assumption that whereas the oil and gas price surges will deliver an enormous blow to post-pandemic global recovery, Russia is not significant enough to deliver tremors to financial stability. 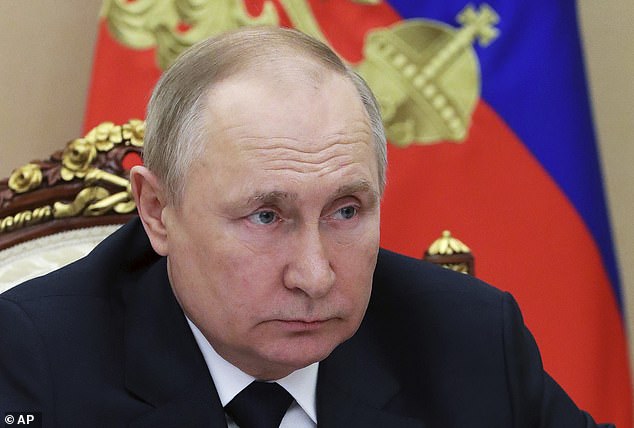 Financial ruin: Vladimir Putin has travelled in a few short weeks from dreams of capturing past imperial glories to leading a nation on the edge of a monetary precipice

In her role as World Bank chief economist, Reinhart disagrees and says that Russia and its ally Belarus are ‘in square default territory.’

In a rapid fire series of downgrades, credit rating agency Fitch regards Russia’s sovereign debt as junk. That is remarkable for the world’s 11th largest economy, which is also a nuclear power.

If a Russian default should occur, it would be the first time since the Bolshevik revolution of 1917.

Vladimir Putin has travelled in a few short weeks from dreams of capturing past imperial glories to a nation on the edge of a monetary precipice.

The ripples from a default would spread far. Around half the £75billion of Russian bonds, cash the Kremlin raised on international markets, are held by foreign holders who look unlikely to get their interest payments of £79million due on March 15.

The Russian state finds itself in the same miserable position as the failing Chinese property giant Evergrande.

As concerning for stability is the nearly £90billion of Russian bank debt which hangs like an albatross around the necks of mainly European banks.

It was learnt during the financial crisis that as a result of syndication and securitisation, no one can be absolutely sure where risk lies.

All it requires is for one banking group or fund to close its doors and the tectonic plates of international finance could shift.

M&S lifer Steve Rowe leaves the retailer in a much better state than when he inherited the mantle of chief executive.

He took an axe to the dated store portfolio, guided the company to a more digital future through Covid and proceeded to create a digital platform with innovative brands such as Sports Edit.

It is a pity then that his successors, Stuart Machin and Katie Bickerstaffe, are being asked to share the title of chief executive with Machin the ultimate boss. Not quite the first female CEO that has been envisaged.

Such a compromise spells indecision, which is not normally the way of chairman Archie Norman.

One trusts that there is sufficient distance in their roles for it all to work out wonderfully well.

But the precedents such as Aberdeen Standard Life aren’t encouraging. Imagine – Simon Wolfson of Next managed to build a faster growing rival all on his own.

How welcoming should investors really be of the bid for Stagecoach by German investment outfit DWS Infrastructure?

The cash offer looks attractive but there is a big risk when we place vital UK assets, such as local bus routes, in the hands of overseas entities.

They are often more interested in what they can take out in dividends even if, as DWS claims, it invests for the longer term. Followers of the water sector have more than enough evidence of this.

The regulator Ofwat has revealed that it has ‘serious concerns’ about the sewage operations of five of Britain’s largest water companies. On this list of public health shame is none other than Yorkshire Water, which could be facing enforcement action.

The owner of Yorkshire Water is Kelda, which is in turn controlled by a consortium of investors – including DWS.

Given a history of under-investment in the water industry, DWS might not be regarded as the best owner of a regional transport group at a time when local services are a critical part of levelling up agenda.

The rival paper bid by National Express looked doomed following the £595million offer from DWS and a Competition and Markets Authority probe.

When National Express reported its latest trading it sounded less than enthusiastic about pressing on given the board support for the German offer.

The Stagecoach board, headed by Ray O’Toole, a former chief operating officer at National Express, needs to engage the brakes on the DWS charabanc.

The Kelda experience suggests that the DWS offer is not in the public interest.