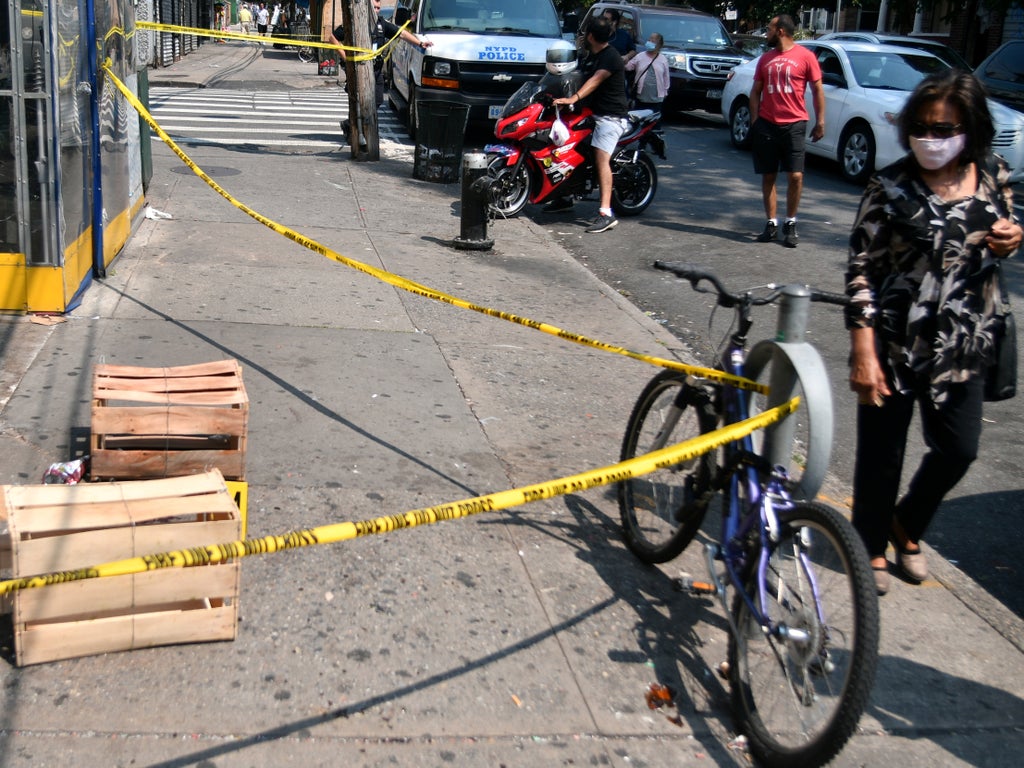 Two hooded and masked shooters approached an area in front of a barbershop in Queens, New York after 10:40pm and unleashed a flurry of bullets that struck 10 people, with the most serious being a wound to a victim’s stomach, police said in a Sunday news conference.

The victims, ranging in age from 19 to 72, are being treated at hospitals for their injuries.

“That’s gang members. That’s guns, multiple guns on the scene, scooters being used, masks. And lastly, unintended targets getting hit,” he said. “This is unacceptable on the streets of New York City, and it has to stop.”

The attackers, who were on foot, brandished and unloaded their guns at a group of people in front of a barbershop. Authorities think the gunmen were targeting Trinitarios gang members. At least seven of those wounded were innocent bystanders, Essig said.

“This was, as I can most accurately describe it . . . a brazen, coordinated attack for a lack of a better word,” Essig said.

Police have released video of the incident to elicit help from the public.

The video shows two hooded men walking along a corner and reaching into their pockets for their weapons before starting a charge toward their off-camera targets.

Seconds later, two people on scooters trail behind them on the same sidewalk.

After firing shots, the armed men get on the back of the electric bikes and flee the scene.

Authorities said they had recovered about 40 shell casings from the scene since Saturday evening.

The Trinitarios gang was founded in the 1980s in New York City before it became a cloak of protection for inmates in prisons such as Rikers and Sing-Sing, according to A&E.

Some of their foes are other street gangs such as Dominicans Don’t Play and the Latin Kings, the New York Post reports.

The gang, which loosely translates to “Trinity Brotherhood,” made headlines just last week when one of its members was sentenced to three years in prison for retaliating against a witness who had testified at a previous federal murder trial. The gang member, Christian Nieves, slashed the witness’s face, cutting him down the jawline for being a “snitch,” according to the US attorney’s office for the Southern District of New York.

Amtrak crash: At least three killed and multiple others injured after train derails in Montana