The TV star, 51, visited a refugee camp in Medyka, Poland last week, meeting with organisations helping those affected by Russia’s invasion of Ukraine and giving a platform to those affected via her new podcast Ukraine’s Hidden Voices. 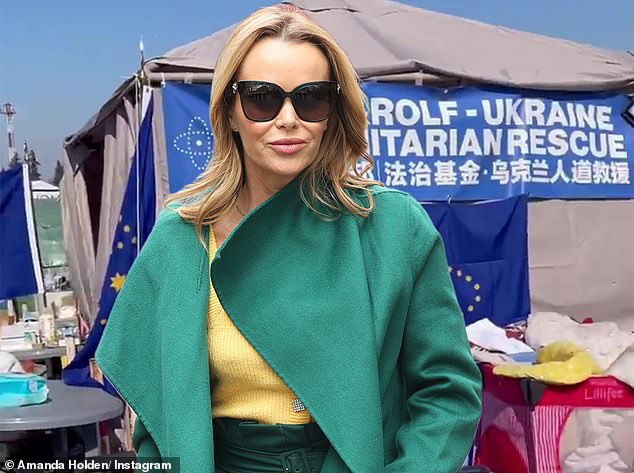 Speaking about visit with the Red Cross to Poland, Amanda told GMB: ‘I went to the biggest humanitarian centre which is a disused Tesco, these people sit next to the country flag they think they want to live in.’

‘They all see it as a temporary measure before they return to their mother land. It’s a very efficient service being run there by everyone.’

‘There was a Union Jack flag there but 35 pages of paperwork, of which the first five questions are asking them their financial situation and mortgage situation which is ridiculous when they only have a bag of belongings with them.’

Taking aim at the Home Secretary, Amanda added that she feels angry as thousands of British citizens have registered for the ‘Homes for Ukraine’ scheme, expressing their interest in supporting Ukrainians fleeing the war. 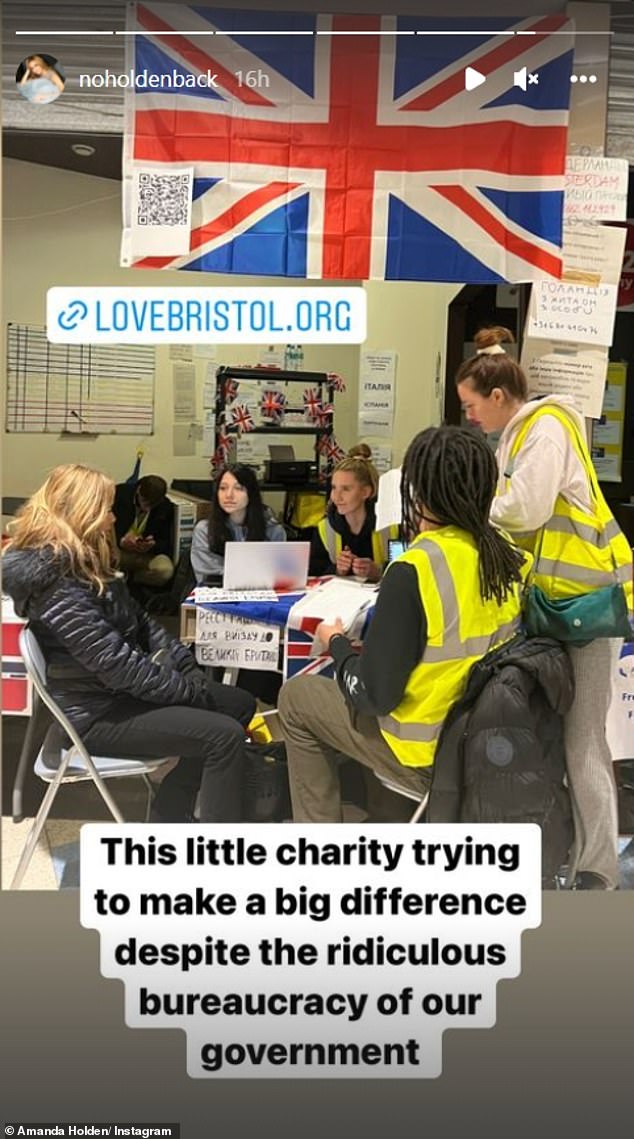 Hitting back: The TV and radio star met with organisations helping those affected by Russia’s invasion of Ukraine, and witnessed first hand the ‘ridiculous’ paperwork refugees face when trying to enter the UK

‘Priti Patel is winning and we’re not going to have many people coming here despite 150,000 people offering to open up their homes,’ said Amanda.

‘We’re British and we were looking through the paperwork thinking, “You would have a job to fill out these forms,” she doesn’t want immigrants does she Priti, oh it makes me really cross.’

Amanda explained that she visited Poland after speaking to a Ukraine refugee who had been sheltering from the Russian attack.

‘I put something up [on my Instagram page] to raise awareness for the Red Cross and from then I noticed a comment from a woman who was sheltering from a bomb in Kiev.’ 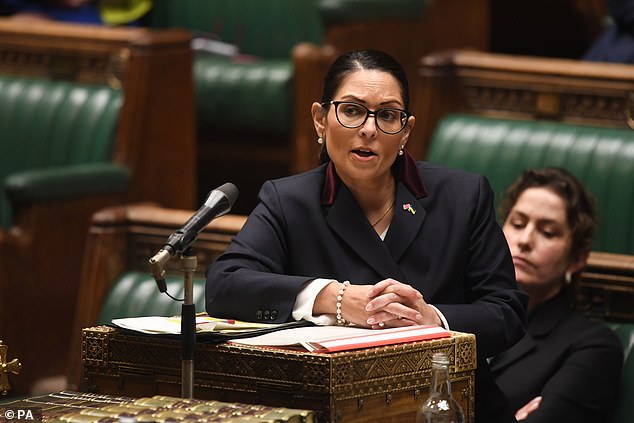 ‘Hostile!’ He branded the Tory MP’s handling of visa applications ‘a complete nightmare’ while indicating that, in general, she has created a ‘hostile environment’ for asylum seekers

‘I called her and spoke to my Heart producers, we decided to do a podcast so the people of Ukraine’s voices could be heard. I feel like talking is medicine, so it’s a great place for us to be educated from a different point of view to the news.’

Amanda explained that after ten days the woman and ‘all the children and women in that basement got onto a packed train, it was reminiscent of World War 2. She is now safely in Romania’.

‘The reason I went out there is because there was an American volunteer on my podcast who said I should go out there. I was speaking to them from the comfort of Heart studios so it was overwhelming.’

Amanda said after her visit she came home and spoke to her daughters Lexie, 16, and Hollie, nine, about the experience, saying: 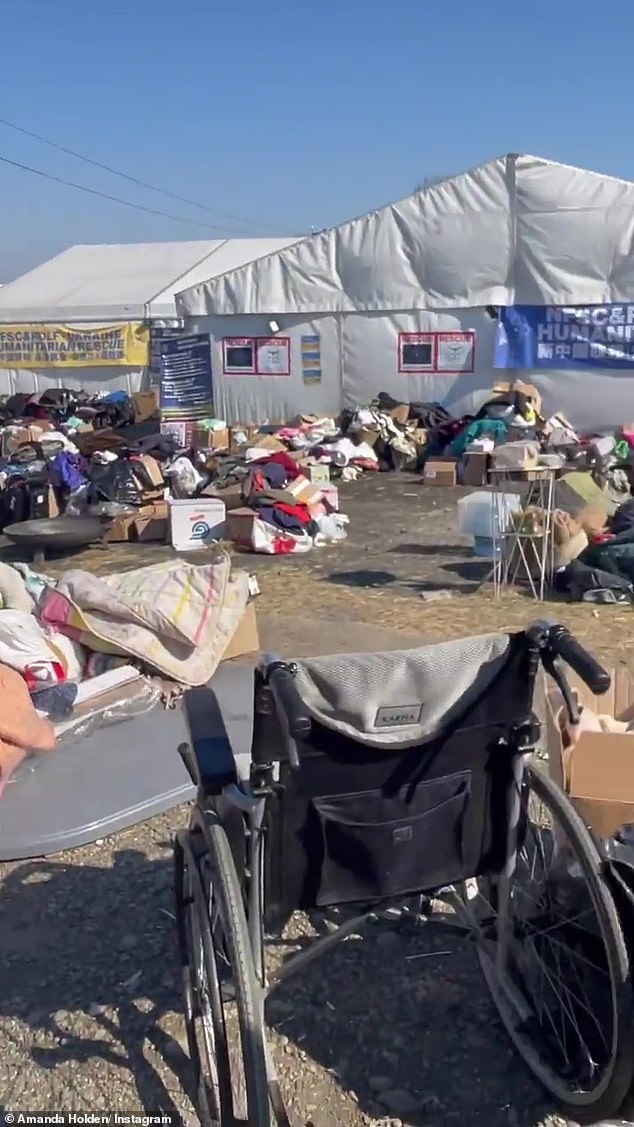 First hand look: Amanda took to her Instagram to document her visit to the refugee centre last week, sharing several images and videos from the camp

‘The people are so pragmatic, they get on with it, I came home and said to my own kids, “I can’t imagine what we would pack into a bag and leave daddy behind, make a snap decision about what country we want to live in”.’

The Lord Of The Rings star branded the Tory MP’s handling of visa applications ‘a complete nightmare’ while indicating that, in general, she has created a ‘hostile environment’ for asylum seekers.

Taking to the stage, Andy said: ‘A world class director is a visionary empowered to change the world with a story that they’re burning to tell. 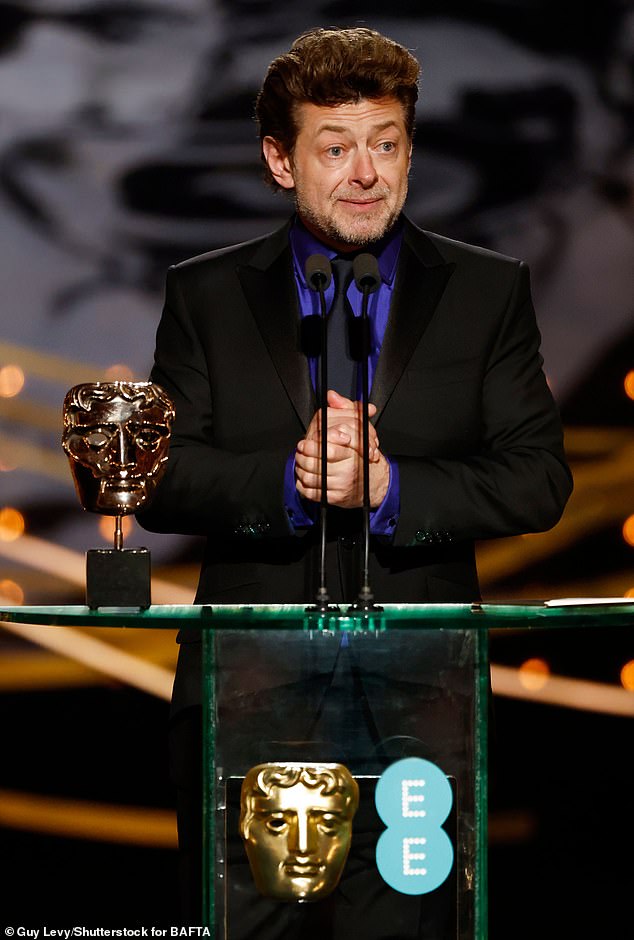 ‘Bringing together and leading a huge family of supremely talented strangers on a difficulty and chaotic journey. Whilst hopefully creating an atmosphere that inspires, is inclusive and values every single member of that family equally.’

‘So it’s no surprise that Priti Patel on her debut feature, Hostile Environment, found enormous problems. And that her follow up movie – All Refugees Are Welcome But Some Are More Welcome Than Others – is a complete nightmare.’

Unlike the European Union – which is allowing Ukrainians three-year residency without a visa – the UK has retained controls on entry, saying they are essential for security.

On Monday, Sajid Javid said Britain could welcome hundreds of thousands of refugees fleeing the fighting in Ukraine over the coming weeks. 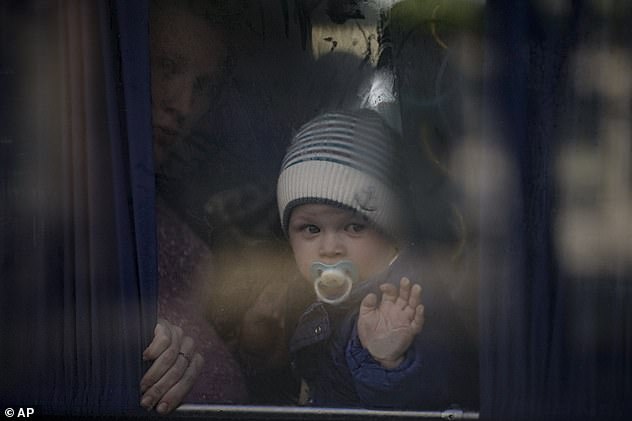 Unlike the European Union – which is allowing Ukrainians three-year residency without a visa – the UK has retained controls on entry, saying they are essential for security. Pictured: A refugee woman holds a baby while waiting on a bus for Ukrainian police to check papers and belongings in Brovary, Ukraine

After the Government’s Homes for Ukraine scheme opened at the weekend, the Health Secretary vowed those arriving in the UK would get all the support they needed.

As of this week, the UK has issued 9,500 visas to Ukrainians with family ties to Britain after receiving more than 30,000 applications, while 150,000 people had expressed an interest in hosting refugees through Homes for Ukraine.

Speaking at the Conservative Spring Forum in Blackpool at the weekend, Ms Patel said it was ‘naive’ to assume that just because most people arriving in the UK were women and children there could not be Kremlin agents among them. 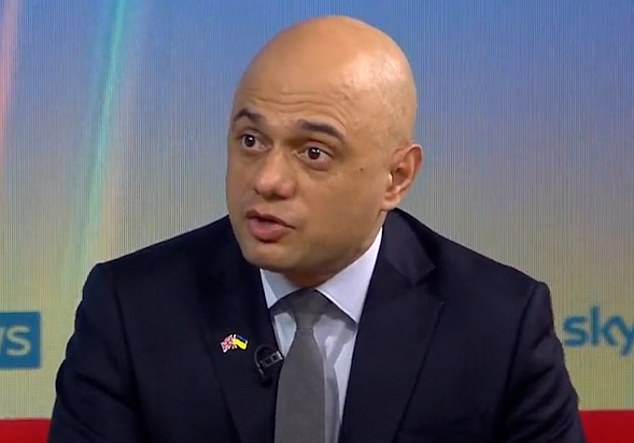 On Monday, Sajid Javid said Britain could welcome hundreds of thousands of refugees fleeing the fighting in Ukraine over the coming weeks

Mr Javid said that while any checks should be ‘proportionate’ the Salisbury nerve agent attack in 2018 underlined the need to be vigilant.

‘We saw in our country Russian agents came here with a deadly nerve agent, a chemical weapon, and they used it in Salisbury. We know it killed people and Russia was directly responsible for that,’ he told Sky News.

‘They infiltrated our country with agents, with a chemical weapon, and used it and so it is right there are some level of security checks. We also know that extremists and extremist organisations operate in that region.’

Mr Javid said the government was supporting Ukraine ‘in every single way we can’.

‘That includes military aid, humanitarian aid, or indeed providing sanctuary for those that are fleeing Ukraine,’ he told LBC.

‘I expect that we will see hundreds of thousands of Ukrainians arrive here in the UK, and they will get all the support that they need.’

How does the visa process work and why do people have to provide biometric data?

The Government’s refugee scheme means British nationals with family in Ukraine are now allowed to bring their relatives to Britain while Ukrainians living in the UK can do the same.

People in Ukraine who are eligible to come to the UK must apply for a visa online.

This process requires people to provide a wealth of information about themselves and formal evidence to back up their application.

They must provide their full name, date of birth, their current passport and details of any criminal convictions.

They must also prove their link to the UK.

For example, someone who is looking to join their partner in Britain must prove that they are married or have been living together for at least two years.

They must provide evidence to show this is the case in the form of a marriage certificate, a tenancy agreement, utility bill or bank statement.

Once they have submitted their application with supporting documentation they are currently required to attend an in-person appointment at a Visa Application Centre (VAC).

When they attend their appointment they are asked to give biometric data in the form of fingerprints.

This data is then used by the UK to conduct security checks which then informs the decision on whether someone is granted a visa.

The UK has faced criticism for sticking to this system because the situation on the ground in Ukraine makes it difficult for people to attend a VAC.

The easing of rules from Tuesday March 15 for Ukrainian passport holders will see the requirement to attend a VAC as part of the application process removed.

People granted permission to come to the UK will be required to attend a VAC to give biometric data after they arrive in Britain.