Amanda Holden has put her Surrey mansion on the market for £5million after giving the luxurious property a showbiz makeover.

The Britain’s Got Talent judge, 51, is hoping to make a £1.5million profit having splashed out £3.5m on the five-bedroom home seven years ago.

The detached home boasts its own bar, huge 30ft by 27ft living room, stylish kitchen diner and a hot tub, where Amanda has posed for several bikini pictures she’s posted on her Instagram page. 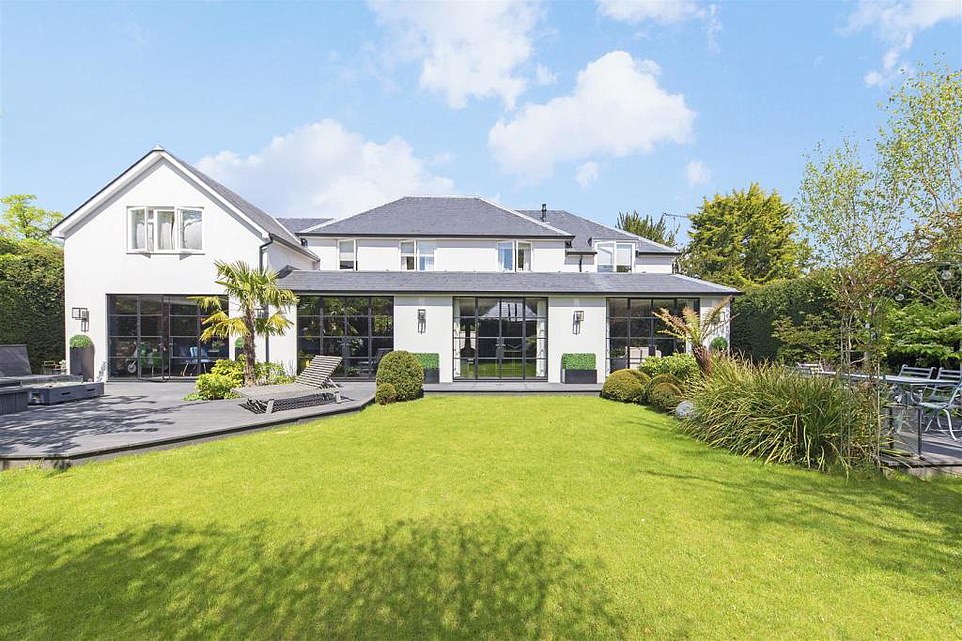 Amanda Holden (pictured) has put one of her family homes on the market seven years after she bought it for £3.5million 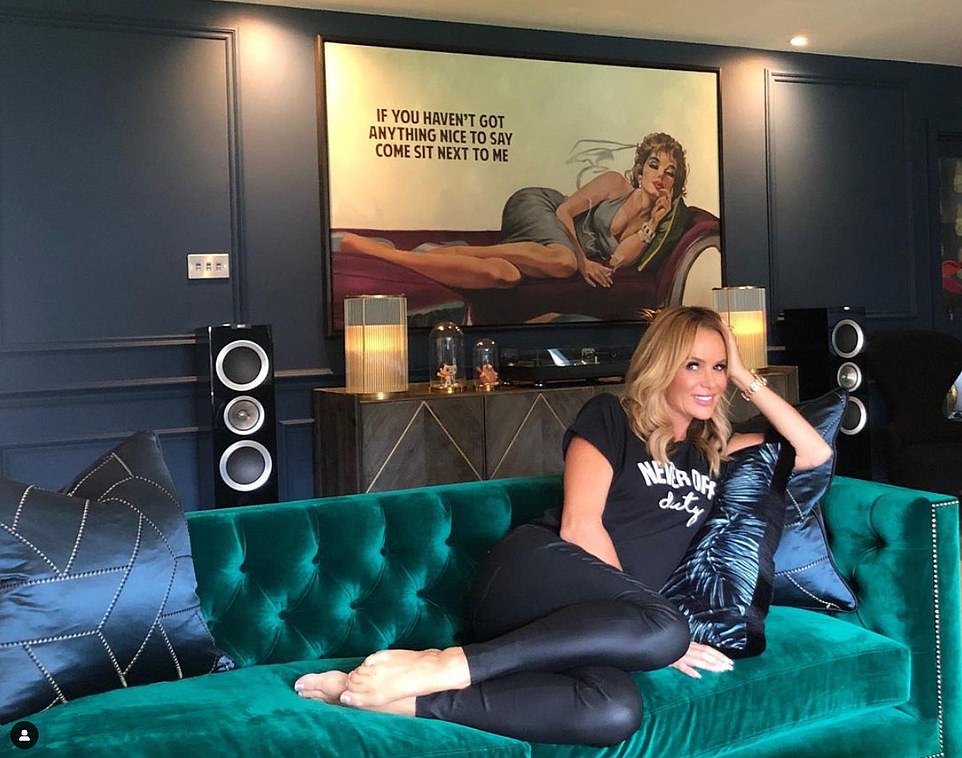 The star often posts pictures on Instagram of her beautiful home, which she has been given a fabulous renovation by the star 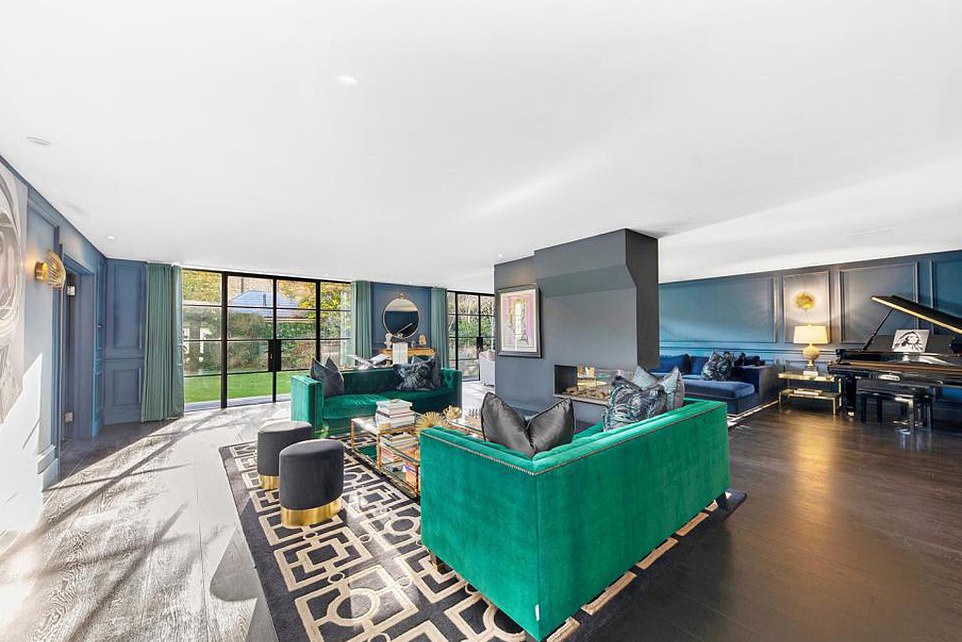 The huge open-plan living room also displays eye-catching artwork, including a giant painting of a female astronaut and a £30,000 drawing by the Connor Brothers of a sultry woman in a silver dress smoking a cigarette

A source said: ‘Amanda loves her family home and is really proud of the work she’s done on it.

‘She’s had a real hand in the makeover and has enjoyed seeing her ideas come to life.

‘It will be a sad day when she moves out but Amanda can take comfort in the number of memories she’s created there.’

Amanda lives in the property with record producer husband Chris Hughes and their two daughters Lexi, 16, and Hollie, 10.

After buying the home in 2015, herself and Chris described the mansion as their ‘forever home’ and Amanda admitted ‘badgering’ its former owner to sell it to them for years until they finally relented.

The couple also own a holiday home in the Cotswolds, which they have been renovating over the past year. 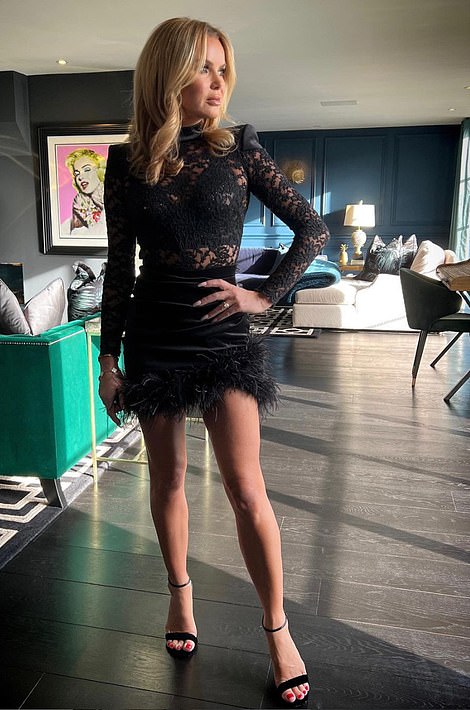 Amanda recently added a glamorous outhouse to the Surrey property where another bar and the hot tub are located, set upon a large wooden decking area, close to a palm tree she planted in honour of Sir Captain Tom Moore.

The garden room also includes a log burner and comfy sofas, which Amanda says are perfect for a ‘sneaky afternoon disco nap.’

The Heart FM DJ renovated her bespoke Wilson Fink kitchen during lockdown, adding new cupboards and worktops, plus mirrored tiles on the walls.

She also has three disco ball-style lights, worth £850 each, hanging over her breakfast bar.

And her quirky taste is exemplified by pineapple-themed accessories dotted around the property, including dark navy and pineapple-print wallpaper and a £125 Graham and Green pineapple lamp.

The huge open-plan living room also displays eye-catching artwork, including a giant painting of a female astronaut and a £30,000 drawing by the Connor Brothers of a sultry woman in a silver dress smoking a cigarette under the caption ‘If you haven’t got anything nice to say come sit next to me.’

The mansion, which includes five bedrooms, three bathrooms and a study, is located behind two sets of private gates which lead onto a private road towards the house.

The driveway is big enough to hold several cars, which is convenient when Amanda hosts her showbiz parties.

Speaking about her home to House Beautiful, Amanda revealed it was important their Surrey property didn’t feel like ‘a show home’

She said: ‘We have two little girls and don’t want them feeling that they’re treading on eggshells.’

Amanda’s passion for interior design has led to her landing a new TV show with pal Alan Carr in which the pair be doing up a property in Italy.

The series will air on the BBC after she pitched the idea to the broadcaster.

Amanda admits herself and husband Chris have so many clothes, they turned a room into a walk-in wardrobe – inspired by her favourite TV show.

She says: ‘I’m a huge Sex And The City fan and Chris did a Mr Big and turned a whole room into my wardrobe.

‘Except, he didn’t leave a pair of Manolos at the end… but he arranged everything else. It’s something I’ve always dreamt of.

‘There’s a remote-controlled mirror that goes up and down and lights up – it’s amazing.’ 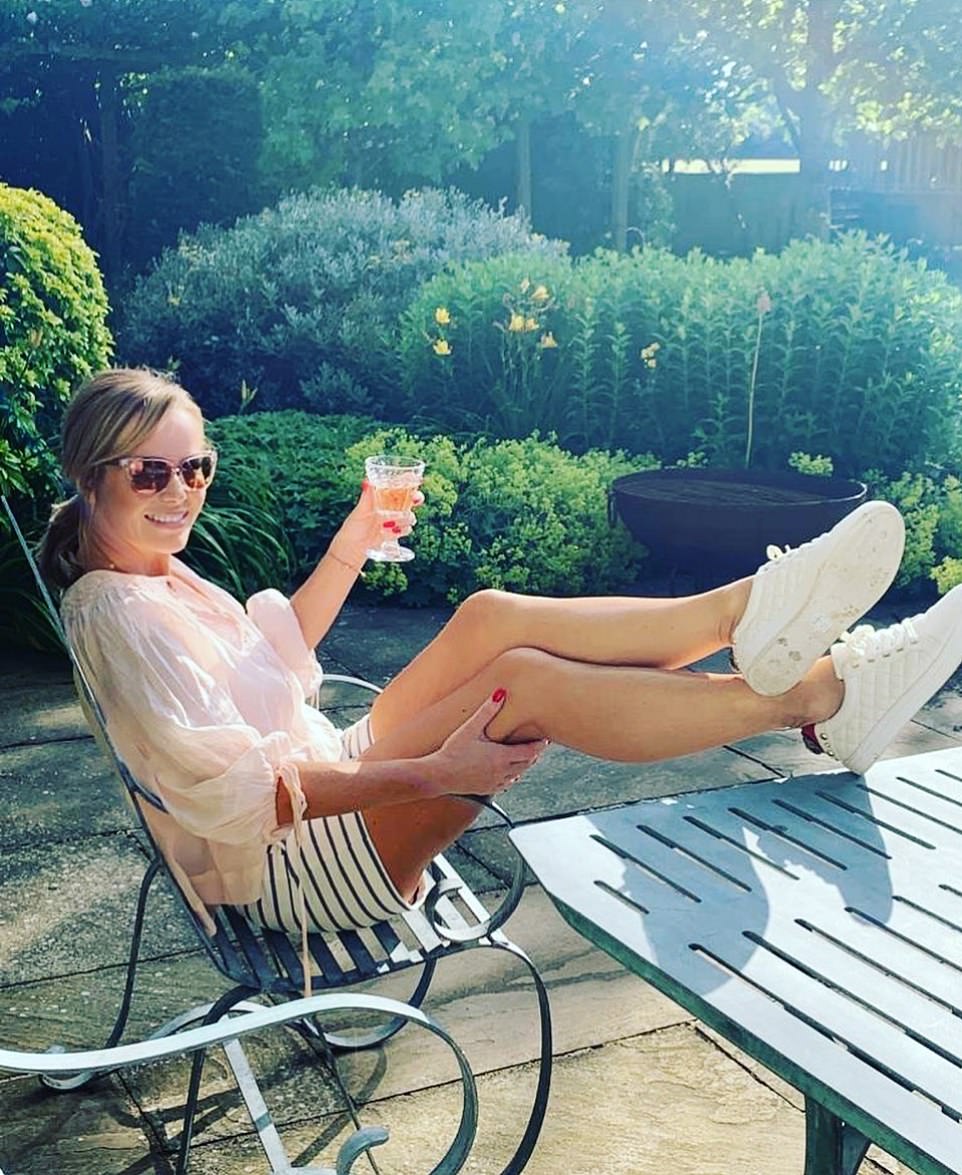 The star has taken to Instagram and posted photos of her on dreamy summer evenings relaxing her garden which includes a hot tub set upon a large wooden decking area, close to a palm tree she planted in honour of Sir Captain Tom Moore 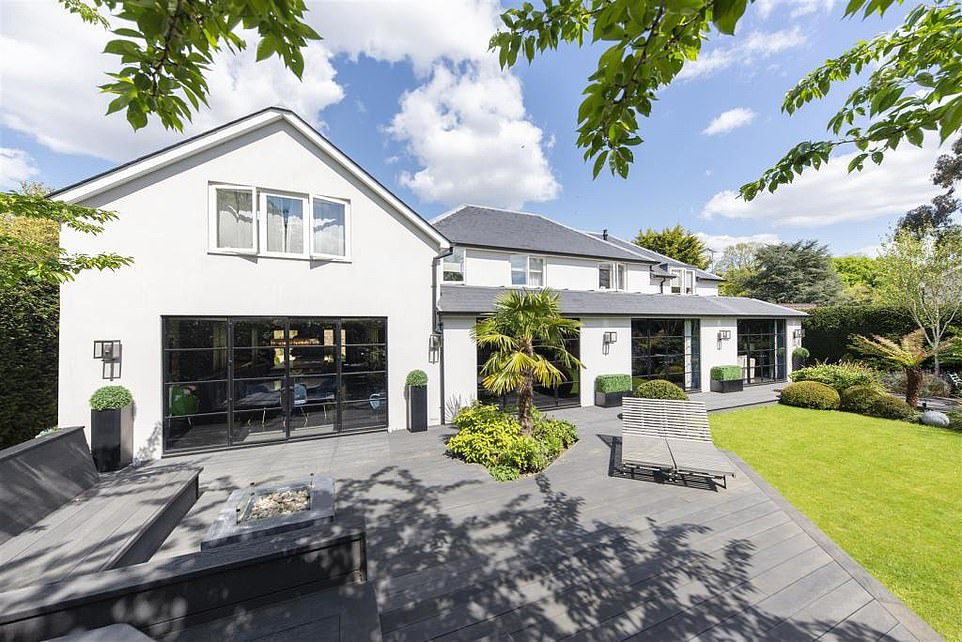 Speaking about her efforts to lovingly renovate her home, house proud Amanda explained: ‘I am house proud, but I’ve got two kids, two dogs and a cat, so it’s a family house. Everything is washable and wipeable.’ 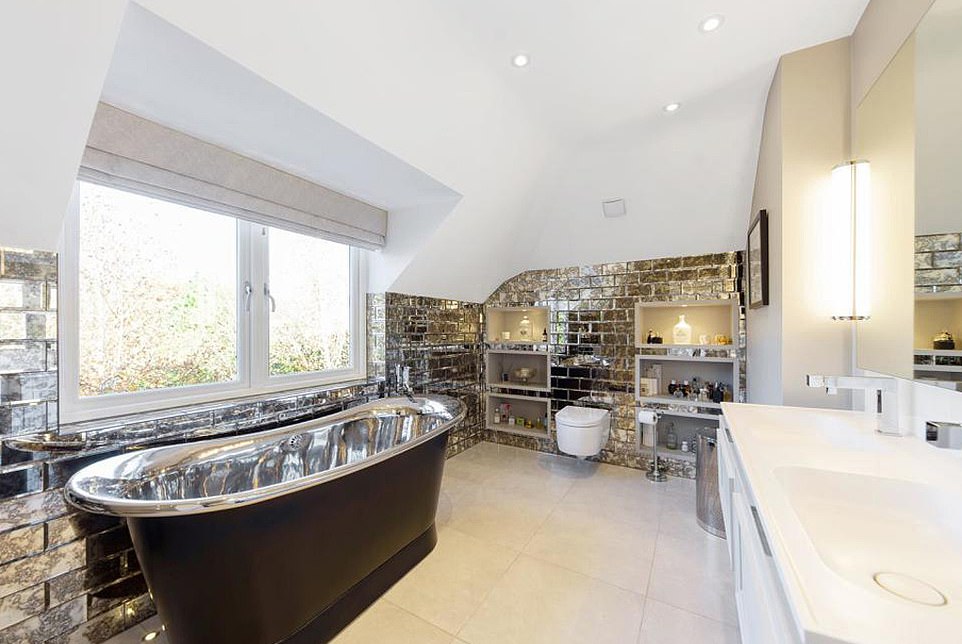 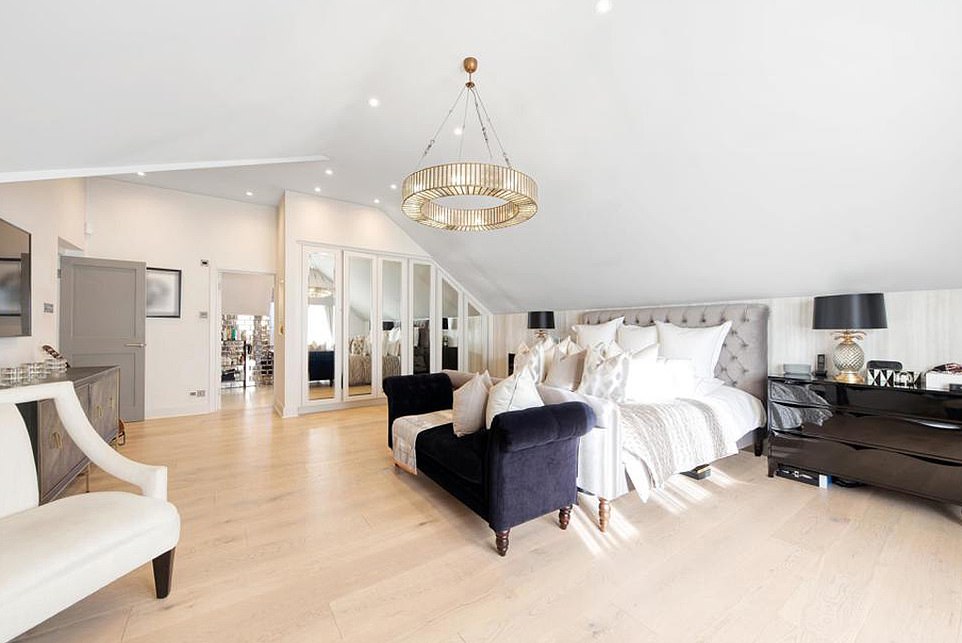 And the TV favourite also concedes she’s a clean freak, meaning every service on the ground floor can be wiped fresh.

Speaking to The Mirror, she explained: ‘I am house proud, but I’ve got two kids, two dogs and a cat, so it’s a family house. Everything is washable and wipeable.

‘It’s so open plan my littlest can cycle her bike around. ‘I don’t have carpets on the ground floor – and this is disgusting – but I was doing an interview a while ago and my puppy pooed on the floor during the chat.

‘But you don’t worry if you have wooden floors. Two words: wipe clean.’

Amanda, who designed a homeware range for shopping network QVC, is so into interior design she believes it could eventually become a day job – if she ever loses her looks.

She added: ‘I want this to be a legacy. When my face falls off and all the telly work dries up, this is actually where I want to be.’