Americans over 75 years old owe the most for medical bills at $17,510 per household, report finds

Americans over 75 years old are suffering from more medical debt than younger cohorts while residents in West Virginia are most likely to still owe money to their doctor, a new report finds.

Analysts from online pharmacy NiceRx said the oldest Americans average $17,510 in debt each — the highest rate in the county and double the $8,995 owed by the average 35 to 44-year-old. But when asked whether they still owed their doctor money nine in ten said they had already paid it off.

It suggests that many over-75s are being forced into tens of thousands of medical debt as they try to pay off costs for eye, ear and teeth treatments which are not routinely covered by Medicare — the U.S.-backed health insurance for over-65s. Many of those in the most debt may also have previously put off care due to costs.

Breaking the figures down by generation showed Gen Z —  aged seven to 22 years — had the most debt per person at $19,890. It was unclear why this was the case, although it may be linked to parents putting off paying medical bills.

The report also found that a quarter of Americans in West Virginia were in debt to their hospital, the highest level in any state. For comparison, in Minnesota — where the fewest number of people are in debt — it is an ‘impressively low’ two percent. 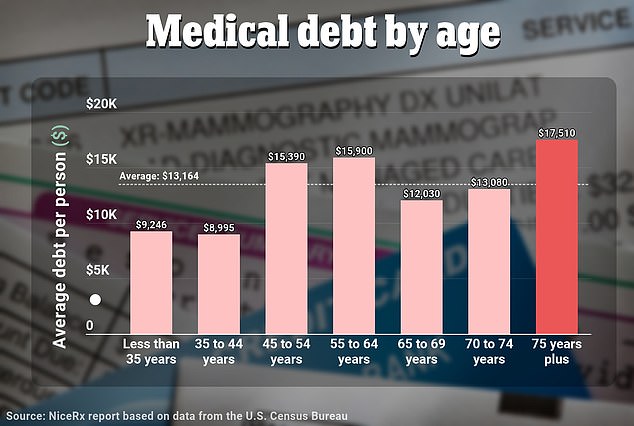 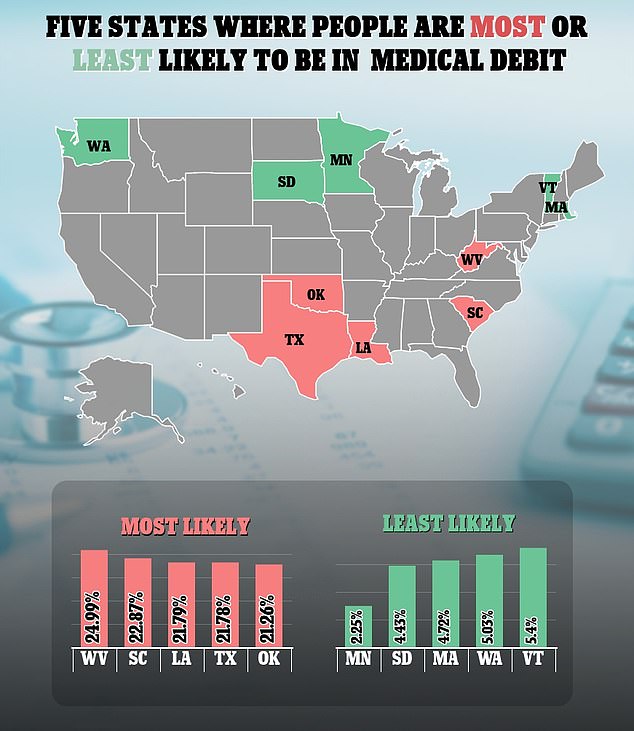 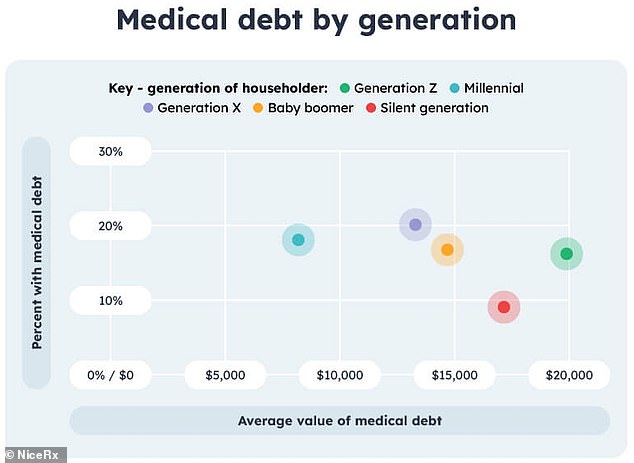 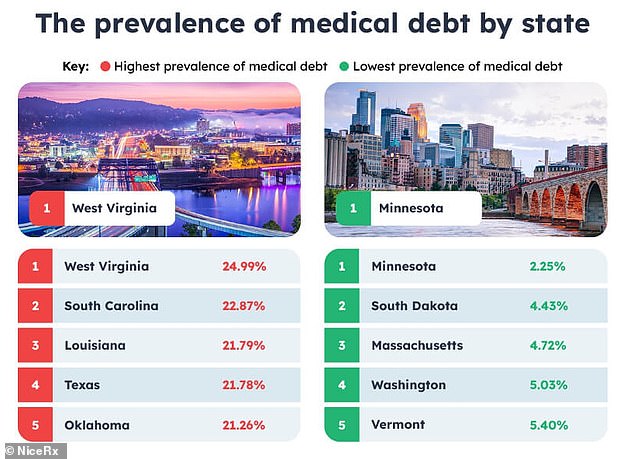 The NiceRx report published this week used data from the U.S. Census Bureau collected in 2019 — the latest data available — to estimate debt in age groups.

It was collected via the Survey of Income and Program Participation (SIPP), which questions a nationally representative sample of up to 37,000 households.

Where are Americans most in debt to healthcare providers on average?

Below are the top and bottom five states for debt to healthcare providers per person.

This is based on data from a report by NiceRx published this week.

Estimates of debt by state came from surveys by the Consumer Financial Protection Bureau carried out in 2020 — also the latest available.

Medical debt is a major problem in the U.S. — with around two in five Americans currently in the red to their hospital — and leaves many families with little option but to cut back on food, gas and other household bills to pay it off.

But it is less of a challenge among people aged 65 years and over thanks to Medicare, the state-backed health insurance set up to cover major costs such as those from suffering a fall or needing a hip replacement.

The scheme only goes so far, however, and leaves older adults high and dry when it comes to costs for eye, ear and teeth treatments — such as cataract surgery — which only rise with age.

The Consumer Financial Protection Bureau has previously warned that failing to offer coverage for these procedures leads to ‘large out-of-pocket costs for Medicare beneficiaries which, in turn, contribute to carrying medical debt’.

In a survey it found older adults in medical debt were most likely to have previously skipped medical treatment or a doctor’s visit due to the cost. They were also likely to say they had not filled out a prescription due to the cost, and admit to finding it difficult to cover monthly expenses.

In the report, the analysts found those aged 45 to 54 years old were most likely to have some medical debt to pay off — a fifth of those surveyed — followed by people aged 35 to 44 years and 55 to 64 years — both at 19 percent.

Conversely, people aged 75 and over were least likely to be indebted to their hospital — at less than one in ten.

However, when costs were averaged by age group it showed that the over-75s had the most to pay off per person, while those in the 35 to 44 age bracket had the least.

Explaining the results, NiceRx analysts said: ‘The age group with the highest level of medical debt is also the oldest.

‘While this could make sense as older people generally have more health conditions, and they’ll have had longer to accumulate the debt, they also have to balance the cost of this debt with their retirmenet funds, which can be tricky to do.’

The NiceRx report also found that by generation, those in Gen Z — currently between the ages of seven to 22 years old — had the highest average medical debt. 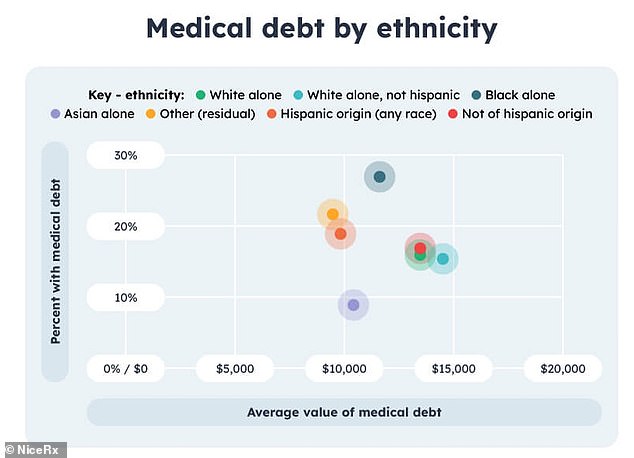 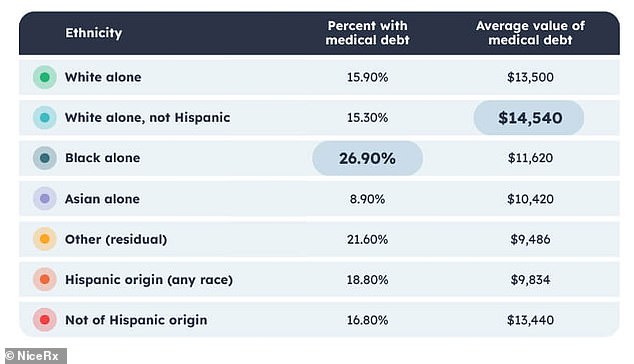 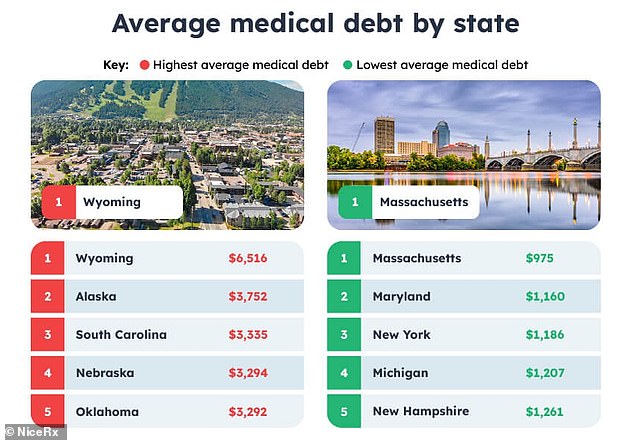 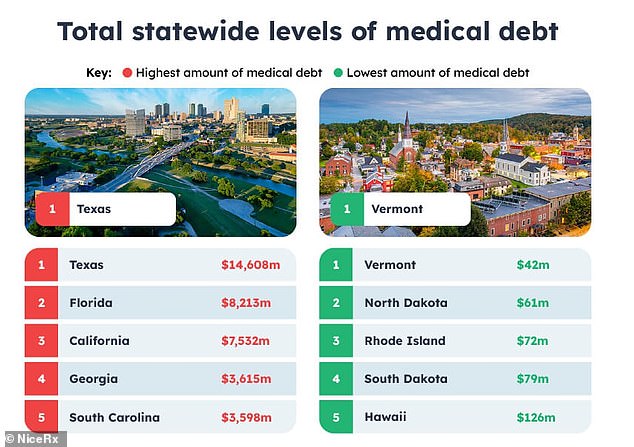 The millennials — aged between 23 and 38 years old — had the lowest debt level at $8,216, which may explain why when the data was averaged into age groups the oldest generation had the highest debt burden.

The analysts did not explain why Gen Z was most in debt to hospitals, but it may be due to low salaries and the cost of living crisis making it hard to pay off medical bills.

When the figures were considered by ethnicity, they showed people from a white ethnicity owed the most to hospitals on average at $14,540.

The report also included data on the proportion of people who were in debt to healthcare providers by state.

It showed those in southern states — which are the poorest in America — were most likely to say they were struggling against medical debt.

For comparison, the top five states where people were least likely to have medical debt were all in the north of the country.