Amy Schumer steps out for a stroll after workout.. two days before co-hosting 94th Academy Awards

Amy Schumer is gearing up for one of the most high-profile gigs an entertainer can get: co-hosting the 94th Academy Awards.

And with less than two days until the curtain drops on Sunday’s ceremony, and her upcoming stand-up comedy tour still to be worked out, the funny lady decided to work out any stress that may be building with a workout.

After the private workout, Schumer and a gal pal capped off their exercise routine with a casual stroll along the suburban streets of West Hollywood. 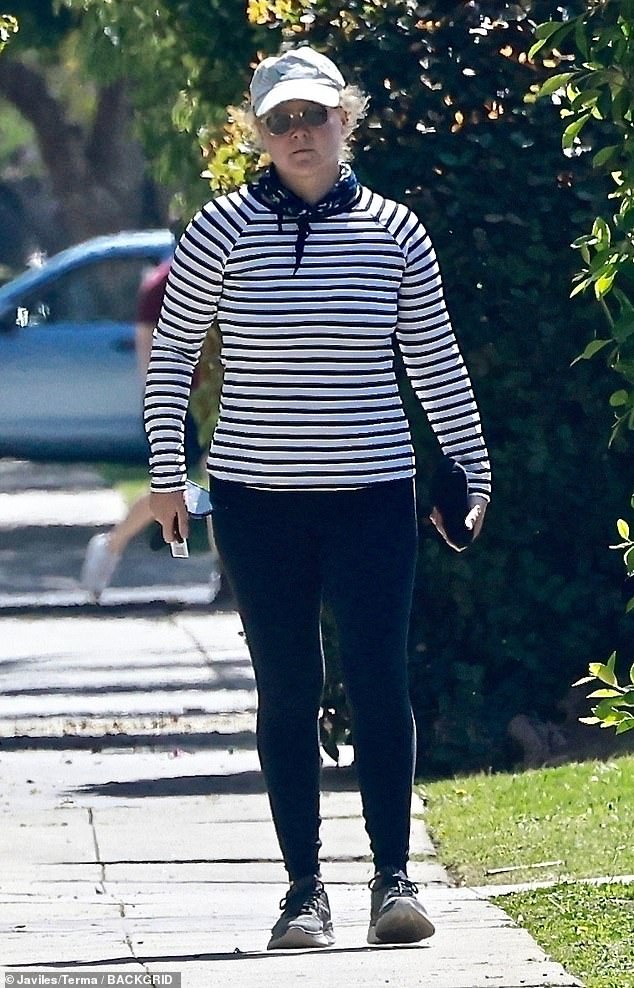 Working out the stress: Amy Schumer, 40, got in a private workout and a casual stroll along the streets of West Hollywood on Friday, two days before she co-hosts the 94th Academy Awards

The New York City native, 40, covered up from the glaring Southern California sun by wearing dark sunglasses and a camouflage baseball cap.

She also donned a pair of black jogging sneakers and had a dark bandana wrapped around her neck, as the temperatures topped 80 degrees Fahrenheit in the afternoon. 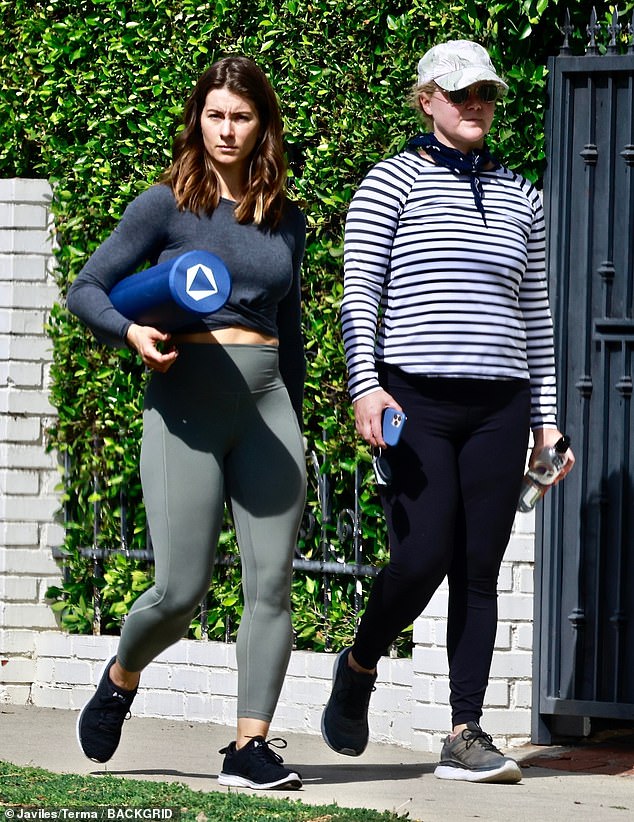 Dressed for exercise success: Schumer looked sporty in black leggings, a black-and-white striped sweatshirt and jogging sneakers for her workout

The Trainwreck star’s gal pal was the picture of athletic wear in gray leggings and a black-patterned crop top that helped showcase her toned figure.

Schumer will be co-hosting the ABC broadcast of the Oscars at the Hollywood’s Dolby Theatre alongside fellow comedians Regina Hall and Wanda Sykes.

This will be the first time since the 83rd Academy Awards in 2011 that the ceremony will feature multiple hosts.

After her co-hosting gig at the Oscars, Schumer will then get to focus much of her attention on her upcoming stand-up comedy tour. 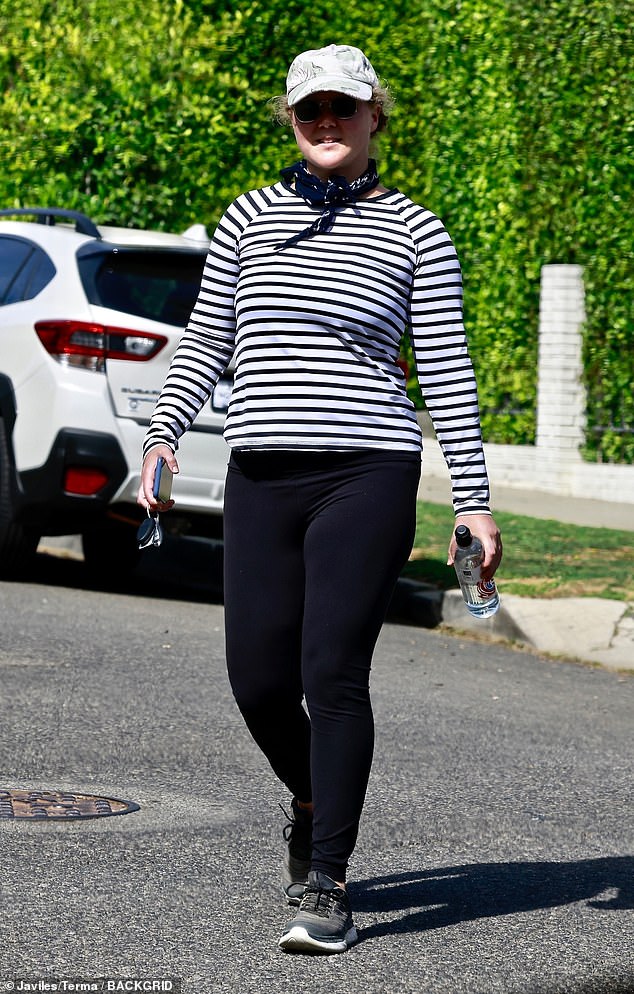 Busy lady: The comedian’s workout comes one week after the premiere of her new comedy-drama series Life & Beth that airs on Hulu

General tickets went on sale Friday, which comes two days after she directed fans to buy pre-sale tickets by using the code ‘AMY!’

Dubbed the ‘Wh**e tour’ Schumer will embark on a 32-date tour starting on August 5 with a show in Red Bank, New Jersey, before concluding with a show in San Diego on November 20.

While serving as the leading lady, Schumer also wrote six of the 10 episodes and directed four of them. 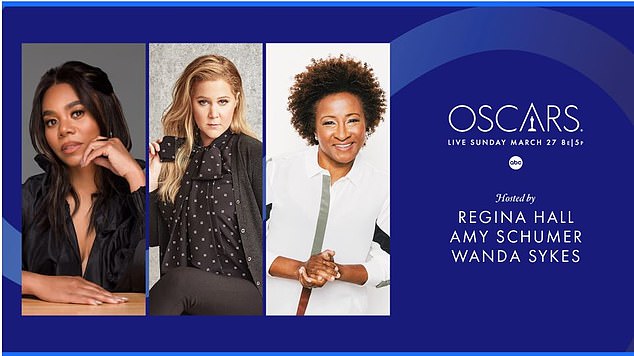 The grand stage: Schumer is co-hosting the 94th Academy Awards with Wanda Sykes and Regina Hall on Sunday, which airs on ABC 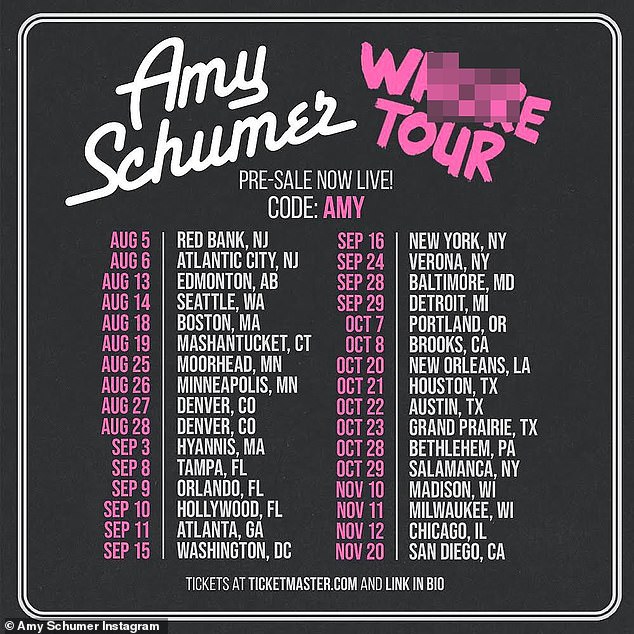 Comedy tour: Schumer is prepping for her upcoming stand-up comedy tour that kicks off on August 5 in Red Bank, New Jersey, and goes through until a show in San Diego on November 20