She certainly is serious about her craft.

But despite her devotion to acting, Anne Hathaway’s children come first.

The 39-year-old actress revealed that she did practice method acting for her role in WeCrashed but didn’t immerse herself into it the way she has previously due to her children. 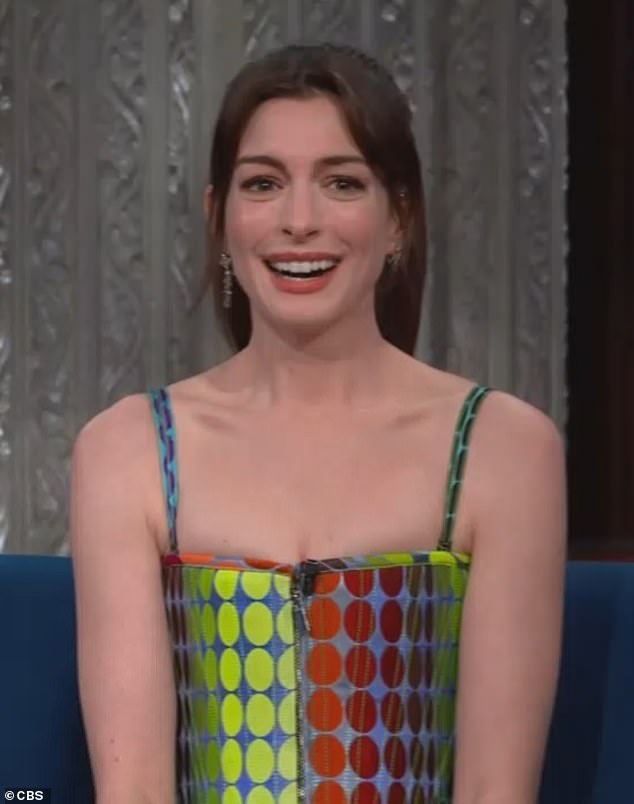 Committed to her craft: Anne Hathaway revealed that she did practice method acting for her role in WeCrashed but didn’t immerse herself into it the way she has previously due to her children

The Oscar-winner – who has two-children with Adam Shulman: five-year-old Jonathan and two-year-old Jack – appeared on The Late Show With Stephen Colbert as she talked about her acting process.

The 57-year-old host asked if she went method to portray businesswoman Rebekah Neumann in the upcoming AppleTV+ series. 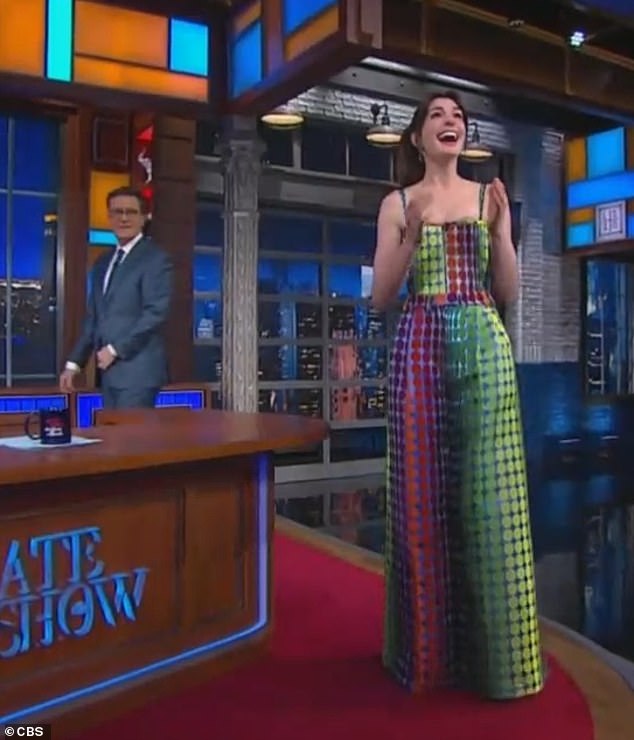 Opening up: The 39-year-old actress – who has two-children with Adam Shulman: five-year-old Jonathan and two-year-old Jack – appeared on The Late Show With Stephen Colbert as she talked about her acting process 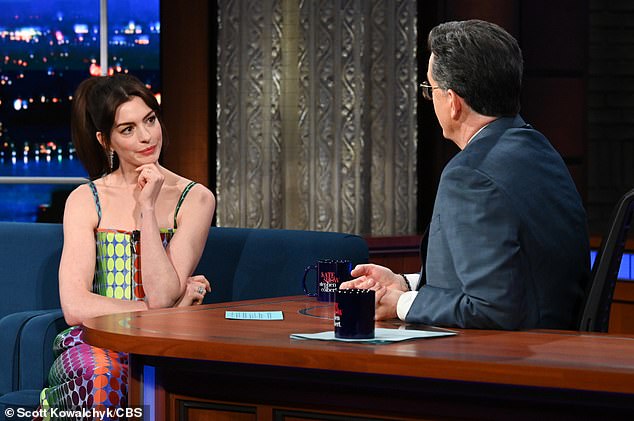 Inquisitive: The 57-year-old host asked if she went method to portray businesswoman Rebekah Neumann in the upcoming AppleTV+ series

‘Let me explain. Yeah, I mean, my kids love me, and I’m sure on some level, care about what I do, but also, like, just want their mom.’

Hathaway went on to explain that she did not go into the depths she has previously for the biographical role but did immerse herself in some of Rebekah’s diet and interests to get a better feel for her as a person and a character.

She said:  ‘So I don’t really go as immersive as I did before I had kids. But I did get very into yoga, and I actually really want to thank my teacher Niki who worked with me every single day getting ready to play Rebekah. Rebekah is a very passionate vegan.’ 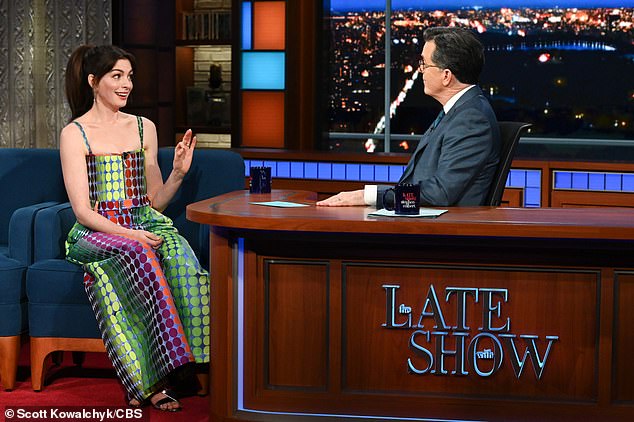 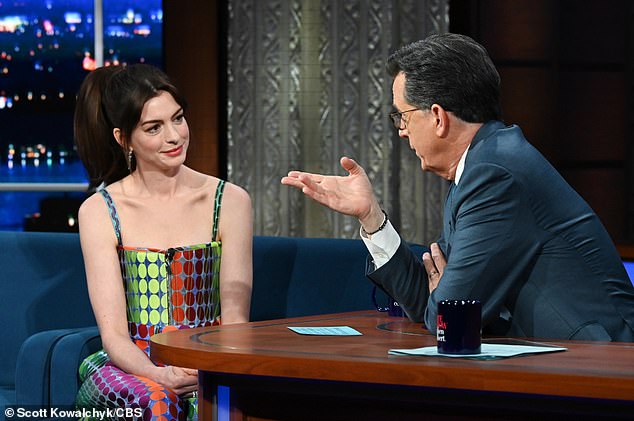 She said: ‘Let me explain. Yeah, I mean, my kids love me, and I’m sure on some level, care about what I do, but also, like, just want their mom’

Stephen was interested in knowing how hardcore an approach to veganism Anne took as he asked if she abstained from eating honey.

Anne then revealed that she didn’t become just vegan by excluding all foods of animal origin but also added the concept of raw foodism, which dictates that foods should be eaten completely raw or heated at temperatures below 104–118°F (40–48°C).

The actress explained: ‘So I became– so I became a raw vegan. I did that thing– I don’t know if you have gone vegan.

‘By the way, it’s great. And we should do as much as we can to eat vegetables for the environment. We all know that at this point, I hope. Thank you. I’ve got to tell you, I did eat antelope in Texas this weekend. We’re all people.’ 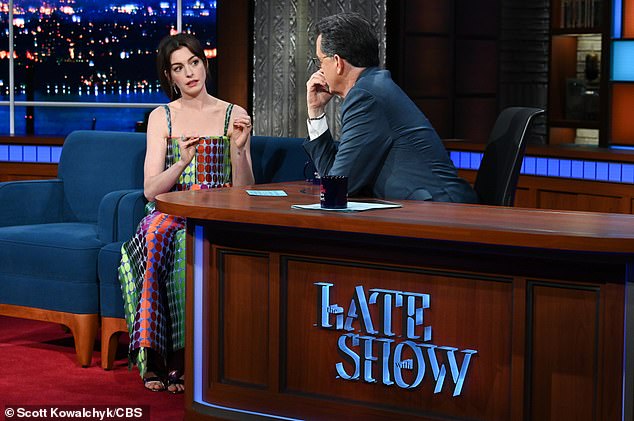 Hmm: Stephen was interested in knowing how hardcore an approach to veganism Anne took as he asked if she abstained from eating honey 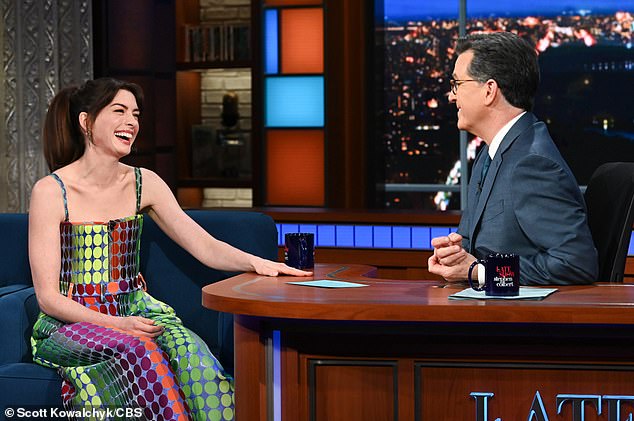 ‘I did that thing’: Anne then revealed that she didn’t become just vegan by excluding all foods of animal origin but also added the concept of raw foodism, which dictates that foods should be eaten completely raw or heated at temperatures below 104–118°F (40–48°C)

Inspired by the podcast WeCrashed: The Rise and Fall of WeWork, the Apple TV+ series will follow the larger than life story of a charismatic founder who floundered a multi-billion dollar business plan.

WeWork is an American commercial real estate company that provides flexible shared workspaces for technology startups and services for other enterprises.

The real-life couple are still married to this day and share five children together. 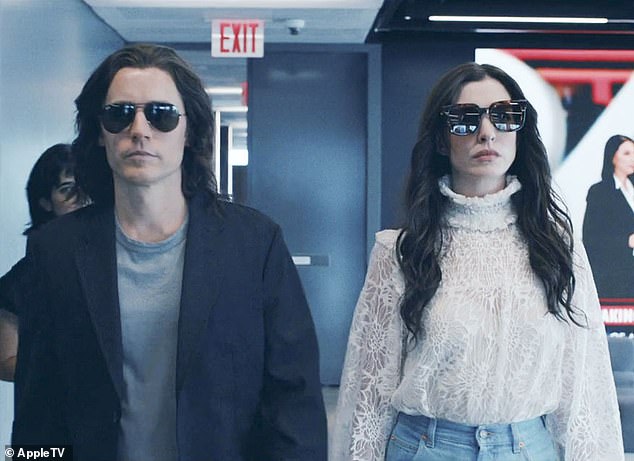 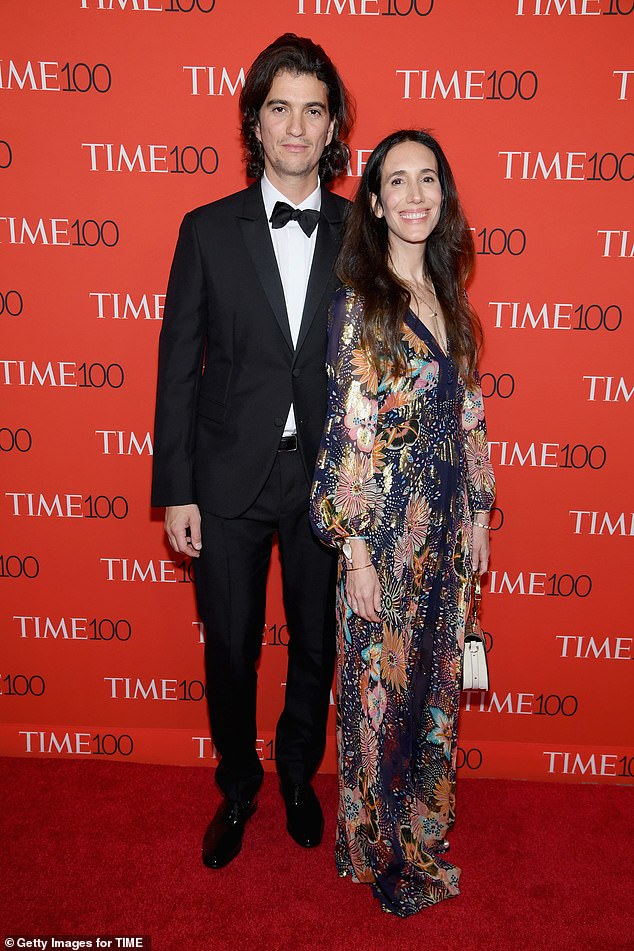 Inspiration: The two thespians portray real-life married couple Adam and Rebekah Neumann, who are seen together in April 2018 in New York City

WeCrashed will document the ‘greed-filled rise and inevitable fall of WeWork and the narcissists whose chaotic love made it all possible,’ according to Variety.

Along with playing the lead roles, Anne and Jared will also act as executive producers with Lee Eisenberg, who will also take on both showrunner and co-writer  titles.

WeWork launched in 2010 and at its peak had co-working spaces in more than 110 cities in 29 countries with a valuation of $47billion. 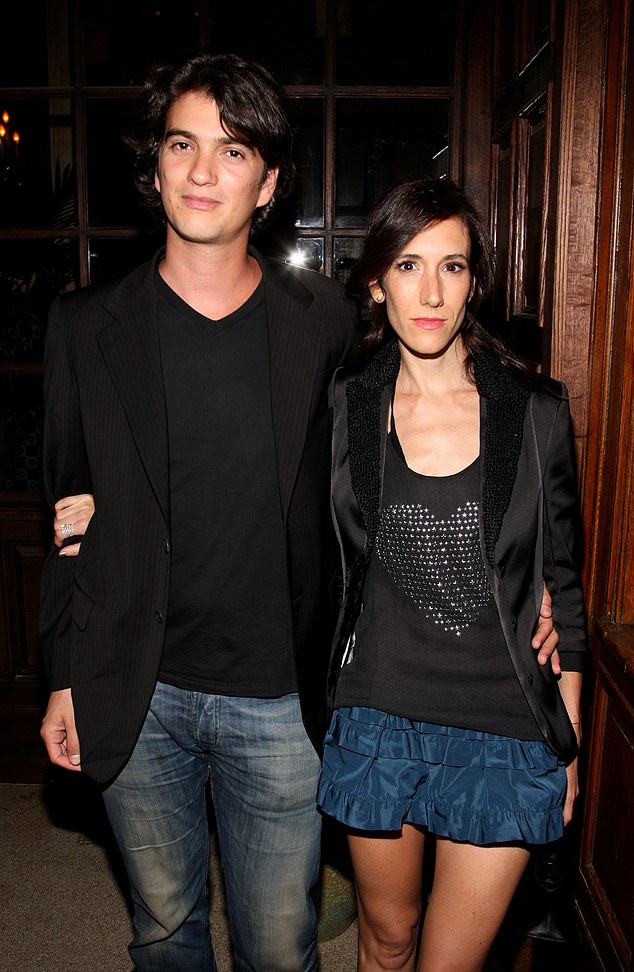 Bond: The real-life couple (seen in September 2009)  are still married to this day and share five children together

At the time, Adam Neumann was put on a par with the likes of Steve Jobs as a Silicon Valley innovator who would change the world, but WeWork’s planned flotation on the stock market stalled and investors soured on the company, causing its value to plummet to just $10billion.

Neumann, who served as chief executive, essentially drove the briefly thriving company straight into the ground with his hard partying ways.

In his book, Billion Dollar Loser: The Epic Rise and Fall of WeWork, Reeves Wiedeman described how ex-employees claimed that Neumann would blast music at party volumes and scream at anyone who asked for it to be turned down.

He also reportedly demanded that cases of Don Julio 1942 tequila were at every office and would ‘lose his s***’ if they were not there and staffer said that he would schedule meetings for 2am and then be 45 minutes late.

Neumann agreed to leave the company in October 2019 after its Japanese investors SoftBank bought $1billion of stock from him to get him out.

WeCrashed is set to begin streaming on AppleTV+ beginning this Friday, March 18.

The Neumann’s Lavish (and RAUCOUS) Lifestyle 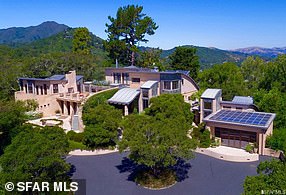 In April 2021, the couple sold their 11-acre California estate shaped like a guitar for $22.4 million (pictured)

The couple boasted an incredible property portfolio, including a $10.5bn Manhattan townhouse, a $35m home in Gramercy Park and a $21m house in San Francisco.

The six-acre country retreat in Westchester County includes a swimming pool, spa and slide as well as sports facilities, sprawling gardens and a dining terrace.

Then in April 2021 Neumann and Rebekah sold their 11-acre California estate shaped like a guitar for $22.4 million, 10 months after it was first put on the market with a $27.5 million price tag.

It was reported that Adam prompted WeWork to buy a $60m G650, in which he added bedrooms and TVs. It was discovered that he was smoking marijuana on the jet. On one journey there was said to be so much cannabis smoke in the cabin that the crew felt the need to put on their oxygen masks.

On one trip to Israel, Neumann’s private jet hadn’t arrived so he borrowed a G650ER plane from Gulfstream. Upon landing in the Holy Land, the crew found a cereal box that was packed full of marijuana that had been stuffed into a closet.

A book focusing on his story stated: ‘Smoking on board was one thing, but transporting marijuana — an illegal drug in New York and Israel — across borders … might expose Gulfstream to serious risks’.

Gulfstream ended up bringing the plane home back to the States without Neumann and his cohorts who already had built up quite the reputation. During another trip in 2015 to Mexico City, passengers were ‘spitting tequila on each other’. One passenger vomited ‘throughout the cabin and lavatory,’ and the ‘crew was not tipped.’

VistaJet, a private jet charter company was forced to take its aircraft out of service on several occasions to mop up vomit and alcohol spills. 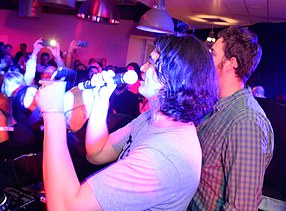 Neumann became known for his raucous partying and leading with an iron fist around his hard-partying ways.

He reportedly splashed out on a tequila-soaked party featuring a member of Run-DMC minutes after detailing the need to cost cut.

Employees have spoken out about the ‘cult-like’ environment at WeWork and the behavior of its so-called ‘partyer in chief’.

Hard-partying Neumann was once seen as a star of the business world, but his reputation was left in tatters after investors balked at his tequila-fueled management style and eccentric ways, derailing plans for a 2019 IPO.

Neumann’s office suites were absurd even by the standards of Silicon Valley bosses. In the early days he had a punching bag, a gong and a bar – later he had a private bathroom with a sauna and a cold-plunge tub at his office in New York.

Timeline of WeWork’s rise and fall 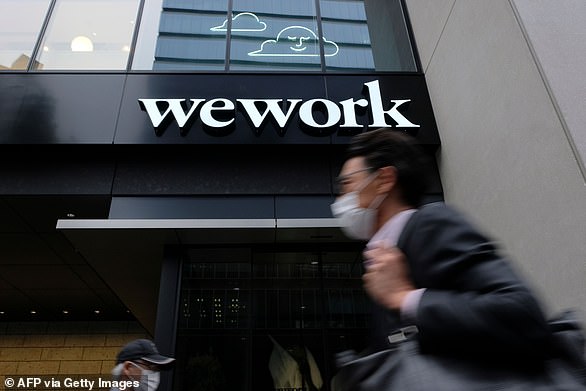 2016: Fortune warns that WeWork faces daunting challenges, writing: ‘For WeWork to live up to its $10billion valuation, it faces the daunting task of scaling like a software company—but with people, long-term leases, and office furniture.’

2017: SoftBank makes its first investment in WeWork, in a massive $4.4billion funding round that valued the company at $20billion.

August 2019: WeWork files a public prospectus for its initial public offering, revealing for the first time the extent of the company’s losses. Analysts express skepticism about the company’s true value and corporate governance.

September 13, 2019: WeWork announces changes to the company’s governance, including the ability for the board of directors to pick any new CEO despite Neumann’s majority voting rights.

September 17, 2019: The We Company, the parent company of WeWork, decided to postpone their IPO until the end of 2019.

September 24: 2019:  Facing backlash over the aborted IPO, WeWork announces Neumann will step down as CEO. The company also puts its private jet up for sale.

October 14, 2019: Reports emerge that WeWork warned clients that approximately 1,600 office phone booths at some of its North American offices are tainted with cancer-causing formaldehyde.

October 16, 2019: Facing a cash crunch that threatens to send the company into bankruptcy, WeWork’s board forms a committee to explore a financing lifeline.

October 22, 2019: WeWork board agrees to take a $9.6billion lifeline from SoftBank that sees the Japanese firm take effective control of the startup. As part of the deal, Neumann resigns from the board and gives up his special voting rights. SoftBank executive Marcelo Claure is installed as executive chairman.

May 4, 2020: Neumann sues SoftBank for walking away from a $3billion bailout for the troubled startup he co-founded. The tender offer was part of a $9.6billion rescue financing package that SoftBank agreed with WeWork in October and gave it control of the company. Since then, WeWork’s occupancy rates have plummeted amid the COVID-19 pandemic.

May 19, 2020: SoftBank values WeWork at $2.9billion. CEO Masayoshi Son says the largest portfolio companies ‘have a relatively good chance of passing through the valley of the coronavirus. The exception is WeWork.’

June 3, 2020: Investors who bought shares in WeWork in the months leading up to its failed IPO file a class-action lawsuit against both WeWork and SoftBank alleging that WeWork downplayed losses and overhyped its business plan. McKelvey announces his departure soon after.