Anthony Joshua ready to do ‘it all again’ after Usyk loss

Eddie Hearn has revealed that Anthony Joshua could be forced to take an interim fight while he waits for his rematch with Oleksandr Usyk due to the world champion’s heroic war efforts in Ukraine. The slick 35-year-old southpaw, who successfully dethroned AJ at the Tottenham Hotspur Stadium on the scorecards last September, is currently defending Kyiv from the advancing Russians.

It means any heavyweight world title rematch is now facing delays after Usyk understandably admitted his country comes before any belts.

Matchroom chief Hearn is now open-minded about what comes next and has admitted Joshua may need to climb back through the ropes before rematching Usyk, in order to keep busy.

“It’s difficult to speak on behalf of Oleksandr Usyk. Firstly, I thought with everybody in Ukraine and people showing incredible bravery out there, particularly some of the great fighters of the past and Oleksandr as well,” Hearn told MMAHour.

“He can have the time that he needs,” Hearn continued on Usyk. “We [Joshua] don’t want any other fight but Oleksandr Usyk. Whether there’s a delay for that fight and we have an interim bout, I guess that’s subject to the situation with Oleksandr Usyk and how much time he needs.”

With that in mind, Express Sport hypothetically examines five potential opponents for Joshua, providing Hearn wants him to remain on course for a shot at redemption later in the year… 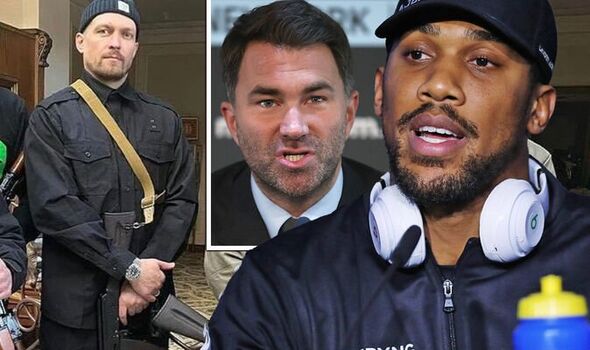 Anthony Joshua could have an interim fight before rematching Oleksandr Usyk (Image: GETTY)

A dangerous fight, no doubt but this is a chance to renew old rivalries and would be no easy evening’s work.

It was far from a classic when the pair clashed in Cardiff in March 2018 as Joshua unified the division by dispossessing the Kiwi of his WBO belt.

Parker showed his durability by becoming the first fighter to ever go the distance with Joshua in the professional ranks.

The New Zealander is currently part of Tyson Fury’s camp for his upcoming all-British showdown with Dillian Whyte at Wembley having relocated to Morecambe.

He is yet to agree to another fight since beating Dereck Chisora in Manchester last December, meaning this would make sense for everyone involved.

Joseph Parker is free to fight and he took Anthony Joshua the distance in 2018 (Image: GETTY)

There is plenty of history between these two after Ortiz was lined up to replace Jarrell Miller – before Andy Ruiz landed his life-changing shot at glory -following his positive drug test in 2019.

The Cuban brute and his team played hardball though and severely tested the patience of Hearn before becoming embroiled in an ugly, public online spat.

That could ultimately push Ortiz out of contention due to the previous bad blood but he remains a viable option for AJ, who is looking to rebuild some confidence.

Ortiz is fresh off the back of stopping Charles Martin on New Year’s Day in Hollywood, meaning a deal is there to be done should the veteran not shy away from the challenge.

This one seems unlikely – but still possible – given that Joyce is currently represented by Frank Warren.

Despite Fury vs Whyte, fights between Warren and Hearn’s stable remain a rarity unless ordered by a governing body.

Joyce is ready for anyone though and would represent a tricky opponent for Joshua, who wants to return to winning ways.

The Juggernaut’s granite chin could prove to be a real problem for AJ and although this is not the best domestic fight that can be made, it would be one that captures the imagination of the public.

Joe Joyce is free and is looking to climb the heavyweight rankings (Image: GETTY)

Kabayel was close to fighting WBC and Ring Magazine heavyweight world champion Fury before his trilogy bout with Deontay Wilder before a deal collapsed.

The 21-0 German has had large spells of inactivity throughout his career but would surely jump at the chance to earn a mega payday against two-time world champion Joshua.

Kabayel has claimed some credible wins against Dereck Chisora and Andriy Rudenko in the past but generally speaking, he has not boxed at this level.

This could prove to be a demolition job for Joshua, which would probably be of zero benefit to anyone involved.

Anthony Joshua’s rematch with Oleksandr Usyk could be delayed due to the war in Ukraine (Image: GETTY)

Wallin is as game as they come having already taken Fury the distance before his Halloween fight with Whyte was cancelled due to the Body Snatcher’s shoulder injury.

The heavy-handed Swede is not one to duck a challenge, therefore, this could be an easy fight to make with Joshua.

It would earn Wallin another big payday and help him gain further credibility as one of the division’s top 15 contenders.

Hearn has also made a number of fights with Wallin’s promoter Dmitry Salita in the past, which could be of significance.