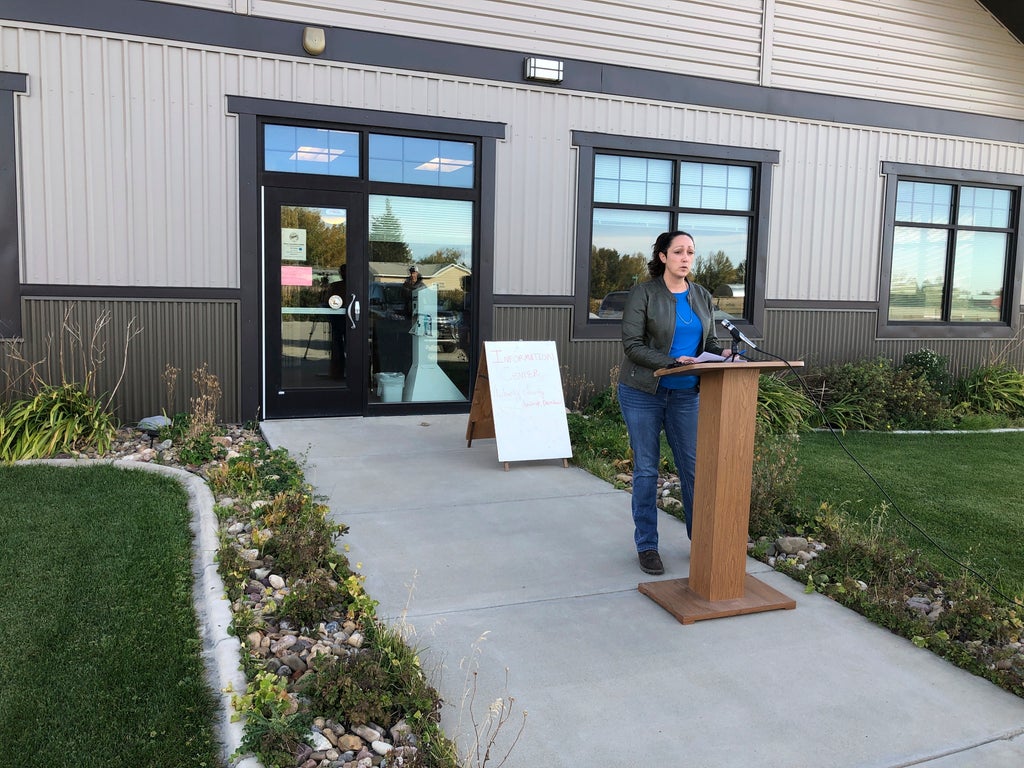 HAITI-RETURNING TO CHAOS — This is the Port-au-Prince that awaits Haitian deportees: An archipelago of gang-controlled islands in a sea of despair. Abandoned neighborhoods. Others barricaded behind fires and piles of garbage, occupied by armed men. Most people have no access to basic public services, no drinking water, electricity or garbage collection. The deportees join thousands of fellow Haitians who have been displaced from their homes, pushed out by violence to take up residence in crowded schools, churches and makeshift camps among ruins. Here are snapshots of a city that is far from welcoming. By Alberto Arce and Rodrigo Abd. SENT: 2,160 words, photos. This is the Monday Spotlight

BIDEN-FUZZY NUMBERS — What will it cost to enact President Joe Biden’s massive expansion of social programs? Congress has authorized spending up to $3.5 trillion over a decade, but Biden is prodding Democrats to fully cover the cost. Democrats are frustrated by the focus on the proposed total, arguing too little attention is being paid to their work to balance the books. By Josh Boak. SENT: 890 words, photos.

VIRUS-OUTBREAK-VACCINE-SUPPLY — With more than 40 million doses of coronavirus vaccines available, U.S. health authorities said they’re confident there will be enough for both qualified older Americans seeking booster shots and the young children for whom initial vaccines are expected to be approved in the not-too-distant future. By Todd Richmond and Kathleen Foody. SENT: 890 words, photos.

AMTRAK TRAIN DERAILS — Federal officials sent a team of investigators from the National Transportation Safety Board to the site of an Amtrak derailment in north-central Montana that killed three people and left seven hospitalized, officials said. By Amy Beth Hanson and Anita Snow. SENT: 920 words, photos.

RACIAL DISPARITIES-PROSECUTION GRANTS — Many of the law enforcement changes enacted by states after George Floyd’s death have centered on policing tactics, not on racial disparities in the criminal justice system. Advocacy groups are now focusing on suburban communities, sending grants to prosecuting attorneys’ offices that work with community organizations to find ways to reduce racial disparities. By Claudia Lauer. SENT: 960 words, photos.

UN GENERAL ASSEMBLY-THE AFGHANISTAN QUESTION — The Taliban want a seat at the United Nations and international recognition of their rule over Afghanistan. The group has asked to speak at the U.N. General Assembly as Afghanistan’s representatives. The U.N. can withhold or bestow formal acknowledgement of the Taliban, and use this crucial leverage to exact assurances on human rights and other issues. This is where the power of the 75-year-old body still holds. By Aya Batrawy. SENT: 1,230 words, photos.

TROPICAL WEATHER — Hurricane Sam is a Category 4 storm but forecasters say the system could fluctuate in strength over the next day or so as it churns far from land over the Atlantic Ocean. SENT: 130 words.

FLYING FARMER-CRASH — The first car jumping attempt in five years by North Dakota’s version of Evil Knievel ended in disaster when the car driven my the man known as the Flying Farmer corkscrewed off the ramp and rolled. SENT: 190 words, photo.

MORE ON THE VIRUS OUTBREAK

VIRUS-OUTBREAK — Britons are encouraged these days — though in most cases not required — to wear face coverings in crowded indoor spaces. But Prime Minister Boris Johnson regularly appears in the packed, poorly ventilated House of Commons cheek-by-jowl with other maskless Conservative lawmakers. For critics, that image encapsulates the flaw in the government’s strategy. SENT: 1,090 words, photos.

VIRUS-OUTBREAK-NORWAY — Police in Norway reported dozens of disturbances and violent clashes including mass brawls in the Nordic country’s big cities after streets, bars, restaurants and nightclubs were filled with people celebrating the end of COVID-19 restrictions that lasted for more than a year. SENT: 440 words, photos.

REDISTRICTING-NEW YORK — As congressional redistricting gets underway, some of the biggest cities are taking prominent roles in reshaping the balance of power in Washington. That’s good news for Democrats. Urban booms in New York and Chicago mean newly drawn U.S. House districts are likely to favor Democrats, making up for losses in Arizona, Florida, Georgia and Texas, among other places. By Bobby Caina Calvan. SENT: 1,050 words, photos.

WESTERN WILDFIRES — Firefighters were gaining the upper hand on a forest fire that displaced thousands of people and destroyed more than 100 buildings near Shasta Lake in Northern California. SENT: 490 words, photo.

US MISSING TRAVELER — Mourners began arriving at a Long Island funeral home viewing for Gabby Petito, whose death on a cross-country trip has sparked a manhunt for her boyfriend. SENT: 330 words, photos. Developing.

POLICE DOG-SUSPECT BITTEN — The FBI has opened an investigation into the arrest of a Black man in Missouri during which cellphone video shows three white officers allowing a police dog to repeatedly bite him. SENT: 250 words.

PETCO FIELD FATAL FALL — San Diego police are investigating the deaths of a woman and her 2-year-old son Saturday after they fell from the third level of Petco Park, just as thousands of baseball fans were heading inside for a Padres game. SENT: 200 words.

SWITZERLAND-SAME-SEX MARRIAGE — Switzerland voted by a wide margin to allow same-sex couples to marry in a referendum, bringing the Alpine nation into line with many others in Western Europe. SENT: 390 words, photos.

MEXICO-HAITIAN IMMIGRANTS — Some of the thousands of Haitian migrants who briefly formed a camp in the Texas border town of Del Rio have found a helping hand across the river in Mexico’s Ciudad Acuña. SENT: 830 words, photos.

SPAIN-VOLCANO — A massive cloud of ash prevented flights in and out of the Spanish island of La Palma as molten rock continued to be flung high into the air from an erupting volcano. SENT: 530 words, photos.

NIGERIA STUDENTS — They spent weeks in the captivity of gunmen in forests ringing Nigeria’s troubled northwest region before being freed. Now at least 25 students in northwest Kaduna State have sent in applications for scholarships and admission to schools abroad. Some of the students, parents and teachers spoke with The Associated Press. They complained of trauma and fear of more attacks. Some of the students have already stopped going to school and an opportunity to study abroad might be their last chance of getting an education. SENT: 810 words, photos.

TURKEY-UNITED-STATES — Turkey’s president has said he would consider buying a second Russian missile system in defiance of strong objections by the United States. SENT: 430 words, photo.

SAN MARINO-ABORTION — Residents of San Marino, a tiny republic surrounded by Italy, voted whether to decriminalize abortion, with the Roman Catholic Church firmly opposed and the “yes” camp hoping to make the procedure legal in some circumstances. SENT: 380 words, photos.

MYANMAR-UN — In his speech last week to open the U.N. General Assembly, Secretary-General Antonio Guterres bracketed Myanmar with Afghanistan and Ethiopia as nations where “peace and stability remain a distant dream.” The situation in Myanmar since the army’s seizure of power eight months ago has become an extended bloody conflict with ever-escalating violence. SENT: 790 words, photos.

DENMARK-CHRISTIANIA — Copenhagen’s Christiania neighborhood is turning 50. The counter-culture enclave is determined to maintain its reputation as a “free-wheeling society” of hash dealers, political idealists, and aging hippies after years of clashing with authorities. SENT: 580 words, photos.

TONY AWARDS — The Oscars, Grammys, Emmys and Golden Globes have all held their ceremonies during the pandemic. Now it’s time for the Tony Awards, celebrating an art form that really needs the boost — live theater. SENT: 620 words, photos. UPCOMING: Will be updated. Show begins at 7 p.m. With TONY AWARDS-THE LATEST.

FILM-BOX-OFFICE — “Dear Evan Hansen” may have been a hit on Broadway, but the filmed adaptation of the Tony-winning show is off to a slow start at the box office in its first weekend in theaters. The Universal musical that’s playing exclusively in theaters grossed an estimated $7.5 million from 3,364 locations, according to studio estimates. SENT: 710 words, photo.

FBC–T25-COLLEGE FOOTBALL POLL — Clemson has tumbled to No. 25 in The Associated Press college football poll and snapped its streak of 97 straight weeks in the top 10. Alabama remained No. 1 with 58 first-place votes out of 62. SENT: 650 words, photo.

GLF–RYDER CUP — Staked to its largest lead in 46 years, the Americans go for the knockout in singles against Jon Rahm and Europe as they try to win back the Ryder Cup. UPCOMING: 800 words, photos by 6 p.m.

HOW TO REACH US

Face mask use in adults in their 30s and 40s has risen consistently for eight weeks, data shows

Vaccination teams are bringing in flu but NOT Covid jabs to give elderly residents, bosses warn