The item — a pewter military button embossed with the letters USA — was found embedded in mineral deposits in Florida that had formed around a cannon after spending centuries underwater. The vessel sank one mile off the coast of St Augustine in late 1782, less than a year before the end of the war, while evacuating British soldiers and loyalist civilians from the nascent republic. Archaeologists are unsure of the ship’s name, referring to her simply as the “Storm Wreck” — as the records in the National Archives at Kew are missing the relevant pages.

Chuck Meide, the director of the St Augustine Lighthouse & Maritime Museum, which made the find, said that his team were “shocked” by the find.

He added: “We know that we have a British, loyalist shipwreck, and it didn’t seem likely at first that we would have a rebel’s uniform button.

“The most likely explanation for the presence of this button is that it was taken from the body of a fallen rebel soldier as a war trophy.

“This kind of thing has been seen before in the archaeological record, such as when a US buckle or button was found in the Confederate submarine Hunley.

“No other artefacts that could be directly associated with rebel Americans have been found on the shipwreck.

“While many USA buttons have been found on battlefield and encampment sites, this appears to be the only such button ever found on a shipwreck.” 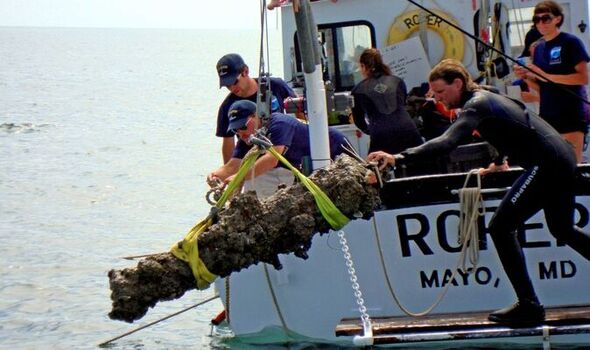 The button ‘trophy’ was found in deposits on a cannon (pictured) recovered from a 1782 shipwreck (Image: PEN NEWS)

The trophy was a pewter button taken from a Revolutionary soldier’s uniform (Image: PEN NEWS)

The cannon, the researchers explained, was raised from the wreck back in late June 2011 — but it was only recently that they fully probed the deposits that had encrusted it.

Dr Meide added: “This cannon was cleaned at that time and then subjected to electrical cleaning for the next four years in order to stabilise it, dry it out, and put it on display.

“The concretion removed from the cannon was saved and stored wet, and eventually processed using a delicate pneumatic scribe to find any tiny objects that might also be preserved within.

“The USA button was found when air-scribing this material more than ten years after the cannon was recovered.”

The button ‘trophy’ came from the uniform of a Revolutionary soldier (as pictured, right) (Image: Public Domain / John Trumbull)

The “Storm Wreck” was one of more than 200 vessels bearing evacuees that set sail from the port at Charleston, South Carolina, on December 18, 1782, Dr Meide explained.

At this point in the Revolutionary War, he added, it had become clear that Britain and her forces were set to lose.

Accordingly, King George III had vowed to evacuate not only his soldiers but also any loyalists who feared for their fates under the impending rule of the American Revolutionaries.

Dr Meide said: “The ship was wrecked sometime between Christmas Eve and New Year’s Eve in 1782 while trying to enter the St. Augustine Inlet.”

At this time, St Augustine was one of the last colonies loyal to the British Crown — and would have represented safe harbour to the refugees from Charleston, some 216 miles to the north.

Dr Meide added: “Of the ships headed to east Florida, sixteen wrecked on the shifting sandbar at the mouth of the inlet.

“Some lives were lost in the wreck, but overall most passengers probably survived, as there would have been time to get boats to ferry people to shore.”

Alongside the cannon, the button, and various other maritime and military artefacts like the ship’s bell, the archaeologists have also reported recovering various household goods from the wreck.

These items — which include candlesticks, coins, cutlery, kettles and workmen’s tools — were most likely brought onboard the vessel by the civilian refugees.

The artefacts recovered from the ship are presently on display at the St Augustine Lighthouse & Maritime Museum’s “Wrecked!” exhibition.

Prince Harry warned: Inflict more pain and it's 'point of no return'