US: Expert on early encounters with ‘prehistoric mammals’

Various estimates of when people first arrived in the Americas have been published in recent years, varying from 20,000 to more than 30,000 years ago. In the second half of the 20th century, many North American archaeologists agreed on the idea that the Clovis people had been the first to reach the Americas. Their ancestors were thought to have crossed a land bridge linking Siberia to Alaska during the last ice age, but this land bridge — known as Beringia — later disappeared underwater as the ice slowly melted.

The Clovis people are believed to have contributed to the wide-scale extinction of the megafauna that once roamed the Americas, large mammals such as mammoths, mastodons and various species of bear.

One line of academic research that has looked at the journey made by the ancient peoples and the animals they would have encountered is known as the Solutrean hypothesis, which claims that the first people to arrive in the Americas were in fact from prehistoric Spain.

The hypothesis says they brought with them a unique and distinctive way of making stone tools which provided the basis for later Clovis technology.

Dennis Stanford, an archaeologist of the Smithsonian Institution, and Brace Bradley, his colleague, are two of the hypothesis’ biggest proponents. 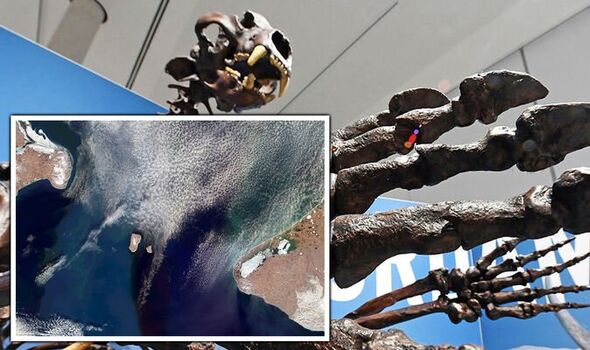 Chesapeake Bay: The estuary in which the Solutreans are proposed to have landed (Image: Google Maps)

Their interpretation puts it that the people of the Solutrean culture embarked on a voyage from Europe around 17,000 to 21,000 years ago, using a boat to migrate across the ice pack of the North Atlantic Ocean.

Of those who subscribe to the hypothesis, many point to recent archaeological finds at Cactus Hill in Virginia, Meadowcroft Rockshelter in Pennsylvania, and Miles Point in Maryland as evidence of a transitional phase between Solutrean lithic and Clovis technology.

While the theory is shrouded in controversy and dismissed by many, it was put into practice during the Smithsonian Channel’s documentary, ‘Ice Bridge: The Impossible Journey’.

Those early humans, on arriving at North America, would have encountered animals outside of their lived experience, with the documentary exploring the “terrifying” extent to which the beasts would have soared over them.

According to the theory, they landed at Chesapeake Bay, an estuary which is separated from the Atlantic Ocean by the Delmarva Peninsula and around 524 miles long.

The documentary’s narrator noted how the group’s first task would have been to “find stones to make the tools and weapons on which their survival depends.”

But the land of icy wilderness would have been unlike anything the Solutreans had encountered, as North America at the time was home to “massive prehistoric mammals” not found anywhere in Ice Age Europe.

The narrator said: “Among them, one of the most terrifying predators of all time, the short-faced bear.

“Capable of chasing its prey at 25 miles per hour and reaching up to heights of 13 feet.”

The short-faced bear went extinct around 11,000 years ago which, in the context of the Earth’s life, is mere seconds away from the present-day.

Before this, it is believed to have become widespread throughout North America, its population beginning to explode around 800,000 years ago.

Bering Strait: The strait once acted as a land bridge between Asia and the Americas (Image: GETTY)

The latter, it is believed, is one of the largest-known terrestrial mammalian carnivores that has ever existed.

This beast would have been the least of the Solutreans’ worries, however, as giant ground sloths were also prevalent, roaming the Great Plains and forests of the Americas.

Known as Megalonyx jeffersonii, it was the largest of the ground sloths in the Megalonychidae family and could reach the size of an ox when fully grown, growing to around three metres in length and weighing up to 1,000kilograms.

Both the short-faced bear and giant ground sloth lived at the same time, through the Pleistocene period.

It was during this time that the world endured something that is known as the Great Ice Age, which saw as much as 30 percent of the Earth’s surface enveloped by glaciers.

Parts of the world’s northern oceans were completely frozen over and left an environment in which only the hardiest of animals could survive, including the early humans who researchers have long believed hunted the megafauna into oblivion.

Archaeological discoveries: Some of the most groundbreaking finds on record (Image: Express Newspapers)

This appeared to be backed-up in 2018 when archaeologists discovered the fossilised footprints of ancient humans at White Sands National Monument in New Mexico.

At the same site the researchers also came across a set of human footprints inside the footprints of a giant ground sloth, leading them to believe that the sloth was likely being stalked and hunted.

While this serves to bolster the Solutrean hypothesis, which many academics have welcomed, others claim it is “scientifically implausible”.

Jennifer Raff, a geneticist who appeared in the Smithsonian documentary, has highlighted how the hypothesis becomes problematic in the face of indigenous histories.

Writing for The Guardian in 2018, she said it “suggests a European origin for the peoples who made the Clovis tools, the first recognised stone tool tradition in the Americas”.

She wrote: “In addition to the scientific problems with the Solutrean hypothesis which I’ll discuss shortly, it’s important to note that it has overt political and cultural implications in denying that Native Americans are the only indigenous peoples of the continents.”

As the hypothesis gained traction, some reports suggested it had been hijacked by white supremacist groups, who interpreted it to say that the “original inhabitants of the Americas” were “white Europeans”, and the present-day Native Americans are the descendants of “later immigrants” from Asia.

Ms Raff continued: “Indeed, although this particular iteration is new, the idea behind the Solutrean hypothesis is part of a long tradition of Europeans trying to insert themselves into American prehistory; justifying colonialism by claiming that Native Americans were not capable of creating the diverse and sophisticated material culture of the Americas.”

She ended by questioning the scientific evidence: “There’s a serious time gap between when the Solutreans could have crossed the Atlantic via the ice bridge (~20,000 years before present (YBP) and when Clovis tools begin to show up in the archaeological record (~13,000 YBP).

Ms Raff added: “There is no evidence of boat use, or tools used for making boats at Solutrean sites.”