Christianity was ‘invented by the Romans’ says Joseph Atwill

In the scriptures, the destruction of the Second Temple in Jerusalem was seemingly predicted in Luke 21, Mark 13 and Matthew 24.

In the latter Gospel, for example, Jesus is reported to have told his disciples: “Truly I tell you, not one stone here will be left on another; every one will be thrown down.”

Within decades, this prophecy was apparently fulfilled when the forces of the Roman military commander and later emperor Titus destroyed the temple while crushing a Jewish rebellion in the year 70 AD.

Now, archaeologists have found proof of the siege — in the form of the stones fired by the Roman army at Jerusalem’s walls to topple them before ransacking the temple.

“The Romans had a well-trained, massive army equipped with the best military innovations of their day. It was a ruthless war machine.

“With the help of the computer, I located all the ballista exactly where they were found.

“I took into account the local topography and the location of the Second Temple-period city fortification walls.

“And I made ballistic calculations, including the launching angle and the throwing distance of the stones.” 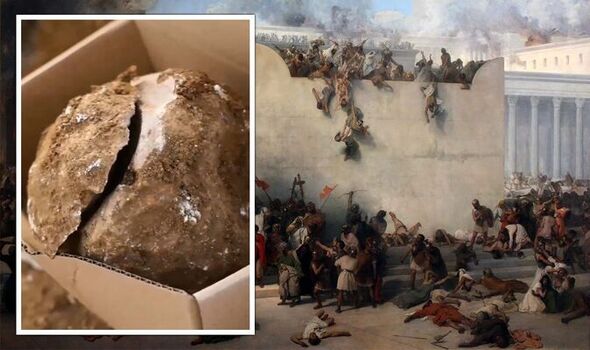 Stones used to batter the Jerusalem’s walls prior to the Second Temple’s destruction have been found (Image: PEN NEWS / Francesco Hayez)

Pictured: a model of the Second Temple, which was “The Temple was destroyed after a four-month siege (Image: Creative Commons / Ariely)

Mr Arbiv explained that he supported his investigation by reference to a first-person account of the siege penned by the Roman historian and military leader Flavius Josephus.

The archaeologist has reported the discovery of an “exceptionally large” number of stones — some broken from use as projectiles — close to a defensive wall unearthed in the Russian Compound in the heart of Jerusalem.

It is here, he explained, that the invading forces are believed to have made their breakthrough assault, having fired hundreds if not thousands of stone projectiles.

Mr Arbiv added: “This is not surprising, as whoever controls this spot dominates the whole area and the fate of the city.

“This aligns with Josephus’ account that Titus commanded [his forces] to penetrate the city from the north-western side of the city wall.”

In addition, he noted, the angle of attack evokes the warning given by God to Jeremiah in the Old Testament that “from the north disaster will be poured out on all who live in the land”.

According to the archaeologists, it is most likely that the Roman forces fired their stone missiles from the area of Nahalat HaShiv’a, which today is a neighbourhood of Jerusalem located outside of the walls of the old city.

The stones the team unearthed were found to have come in a variety of sizes — from large ones launched over 1,300 feet by sophisticated war machines to small slingshots that would have been deployed by trained infantry.

The excavations have also unearthed spears, swords and arrowheads — including those built to penetrate armour — dating back to the time of the conflict.

A depiction of the spoils from the siege of Jerusalem as seen on Rome’s Arch of Titus (Image: Creative Commons / Steerpike)

Commenting on the findings, Israeli Antiquities Authority director Eli Eskosido emphasised the determination of the city’s defenders in the face of the forces of Rome,

He said: “The physical evidence of the huge resources employed by the Roman army in Jerusalem reflects the extremely harsh battles that eventually led to the destruction of the Second Temple.

“Notwithstanding the internal factions, a small group of Hewish defenders held off the Romans for a few months until the tragic destruction of the city.

“The use of up-to-date research methods reveals more and more of the fascinating history of Jerusalem.”

The destruction of the Second Temple is regarded as a tragedy by the Jewish community, who mark the occasion of the anniversary each year on the fast day of Tisha B’Av, which this year fell last weekend.

Today, the site of the former temple is occupied by the Dome of the Rock — an Islamic shrine completed in 692 AD — although many long to build a third Jewish temple there.

According to Jewish tradition, the presence of such a temple would herald the coming of a Jewish messiah, and its theoretical construction remains a point of tension between the Israelis and the Palestinians.