Prince Harry opens up fatherhood and ‘cheekiness’ of Archie

The pictures included in birthday wishes publicly made by senior royals to Archie Harrison on his birthday attracted the interest of royal watchers and commentators, noting they had already been used in the past.

The Royal Family Twitter account, which represents the Queen as well as working members of the Firm who don’t have their own social media handle, led tributes for Meghan Markle and Prince Harry’s son on his third birthday.

The message presented a heartwarming photograph by Chris Allerton taken during the Queen and Prince Philip’s first official meeting with the Duke and Duchess of Sussex’s boy.

The snap dates back to May 8 2019, shortly after Meghan and Harry introduced their son to the world with a photocall held at Windsor Castle.

The picture shows the elderly royals smiling as they look at their eighth great-grandchild, held by Meghan.

Next to her, stands the Duchess’ mother Doria Ragland and Prince Harry. 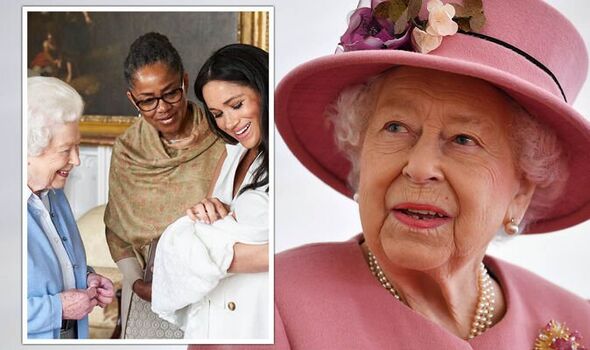 Shortly after this was tweeted, commentator and Daily Mail Diary Editor Richard Eden took to the social media platform to write: “Notable that this the latest photograph the Palace has.”

Mr Eden seemingly referred to the fact the account has marked Archie’s birthday for the second time with the same picture, as it was used also on this day in 2019.

In May 2020, the Royal Family Twitter account chose to wish Archie a happy birthday by sharing one of the snaps taken during the May 8 photocall with the press.

The Queen’s social media account isn’t the only royal profile to have reused the same snap multiple times to mark this special day for the Sussexes.

Kate and Prince William’s Twitter account, @KensingtonRoyal, has used the same picture to wish Archie a happy birthday over the past three years.

READ MORE: Meghan ‘loathed’ England but may ‘come back for biggest role’ – claim

The photo, also by Mr Allerton, was taken during the boy’s christening in July 2019 and is the only public photograph which includes the Cambridges and their nephew.

The string of tweets read: “@KensingtonRoyal’s Birthday tweets for Archie Mountbatten-Windsor over the years.

“Same photo & message each year. The Christening Photo is the only official photo of Archie with his Aunt & Uncle.”

“Meanwhile @RoyalFamily has varied its birthday message to Archie slightly.

“And has alternated between two photos of the Queen’s first meeting with Archie.

Archie with his parents in South Africa in September 2019 (Image: GETTY)

The Sussexes held a photocall at Windsor Castle on May 8 2019 to introduce Archie to the world (Image: GETTY)

“That is the only official photo we have of Archie & his paternal great-grandparents.”

Gert’s Royals tweeted: “@ClarenceHouse did not share its own photo this year, choosing instead to quote tweet @RoyalFamily.

“The past years, they have shared a Christening Photo of Archie.

“The Christening Photos are the only official set of photos released to show Archie & Prince Charles.”

The Queen has 12 great-grandchildren (Image: EXPRESS)

However, Clarence House shared a story on Instagram wishing Archie’s birthday which featured a black and white picture, also dating back to the christening, featuring Prince Harry holding his firstborn and the Prince of Wales smiling as he looks at his grandson.

Members of the Royal Family last had the chance to see Archie in person in November 2019, before he flew to Canada with his parents for an announced six-week break from royal duties.

Archie has yet to return from America with his parents, but he is known to have been in touch with the Queen via video calls.

Given Harry and Meghan remained on good terms with Her Majesty even after they stepped down as working royals, it is possible they have provided her with other photographs of the tot.

One royal watcher, Rowan Marie replied on Twitter to another user claiming the Palace could have used a screenshot from a video call between the child and his great-grandmother in today’s post.

She wrote: “Sure but only if H&M consent to their image being used for such things and they have been vocal about their kids’ privacy.”

Another Twitter user, @LGood2022, replying to Mr Eden’s comment claiming this is the latest picture owned by the Palace of Archie and the Queen, said: “That have been shared with the public.

“To be fair, I am sure William and Catherine have not shared 100 percent of their photos.

“Beatrice has not shared any, yet I am sure the palace has them.

“As the parents it is their right to decide what the world sees.”

Other Twitter users, on the other hand, were saddened at the fact the royal account had to recycle the photograph.

Another, Shell Hickin, wrote: “Why can’t they use a ‘now’ photo of Archie? That’s sad.”

@elvis_prate wrote: “Surely you must have a more recent photo of the lad at three?”

To which @dowse_carol replied: “They probably have, but as his parents haven’t released images it would be wrong for them to.”