Ashley Cain has marked the first anniversary of daughter Azaylia’s death by purchasing 365 white roses to lay at her graveside.

The former Ex On The Beach star revealed the enormous bouquet in an Instagram post on Tuesday, shortly after completing a 100 mile charity run on behalf of the trust set up in her name.

The 24-hour run came to an end in London’s Trafalgar Square on Sunday, and Ashley, 31, confirmed the flowers were purchased shortly afterwards. 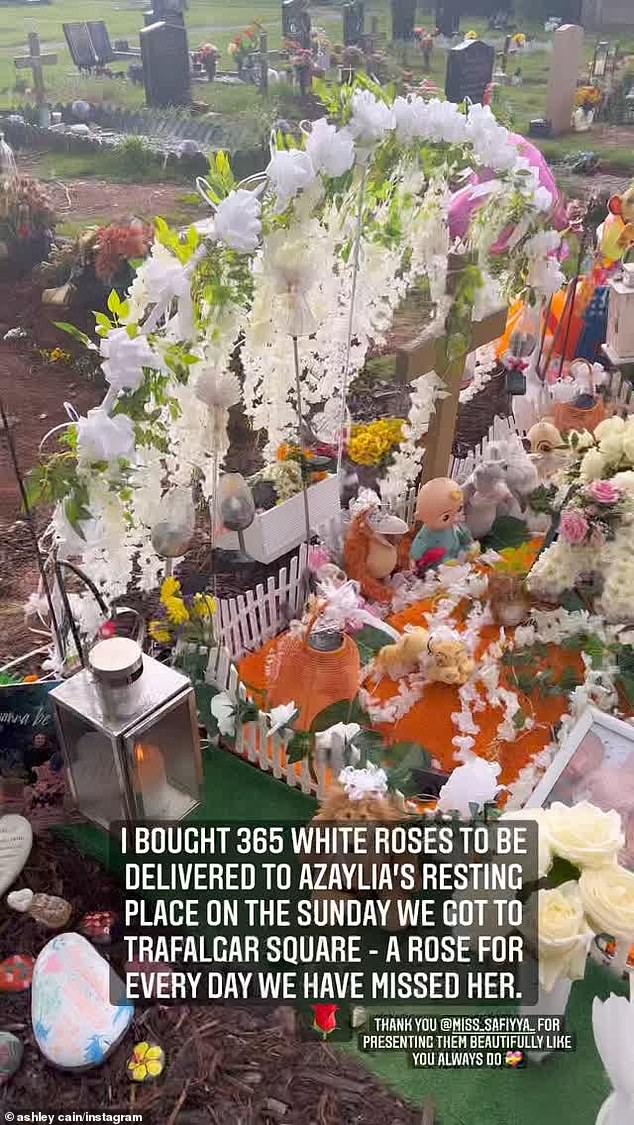 Tribute: Ashley Cain has marked the first anniversary of daughter Azaylia’s death by purchasing 365 white roses to lay at her graveside

He wrote: ‘I bought 365 white roses to be delivered to Azaylia’s resting place on the Sunday we got to Trafalgar Square – a rose for every day we have missed her.’

Ashley broke down in tears on Sunday as he completed a 100 mile run to honour the one year anniversary of his daughter’s death to leaukemia.

He was greeted by hundreds of adoring fans and family members cheering ‘that’s our champ’ at Trafalgar Square in London after the 24 hour challenge. 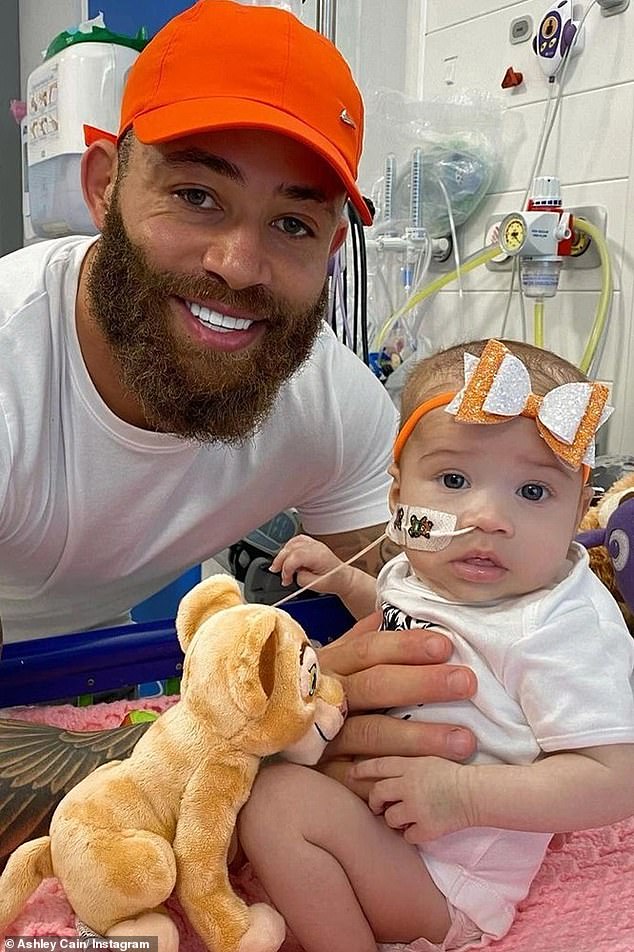 Ashley took on the mammoth task to raise money for the family’s charity, The Azaylia Foundation – which helps children with serious illnesses to access treatment not readily available on the NHS.

British adventurer Ant Middleton also turned up to support Ashley and his crew on the day.

He described Ant’s presence as as a ‘major turning point’ for him during the gruelling run as his wise words gave him inspiration to get him through the final miles. 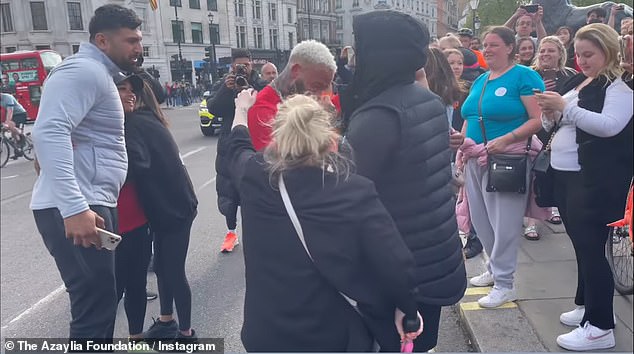 Emotional: Ashley broke down in tears on Sunday as he completed a 100 mile run to honour the one year anniversary of his daughter Azaylia’s death 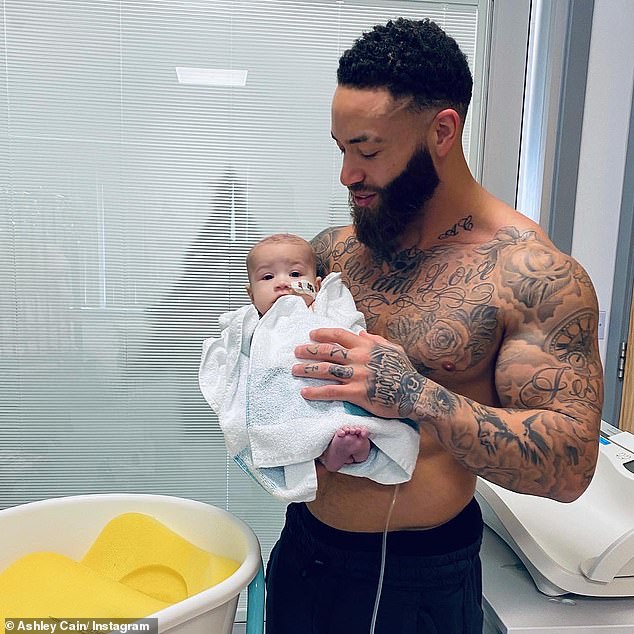 Devastating: Ashley tragically lost his daughter Azaylia when she was just eight months old, after a battle with leukemia 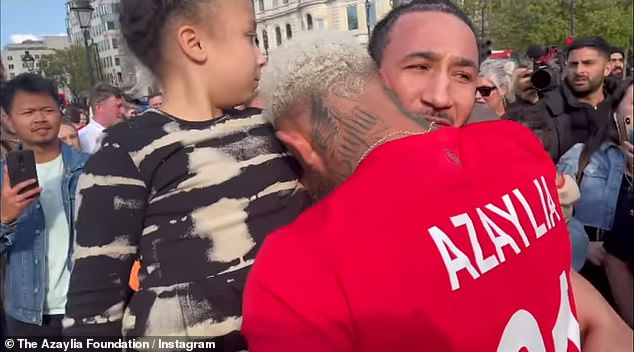 overwhelming: He was joined by hundreds of adoring fans as he made it to the finish line and took some time to take overcome the emotion 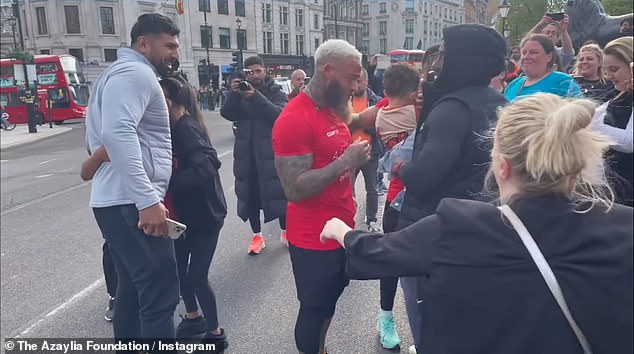 Gruelling: Ashley was met by hundreds of adoring fans and family members at Trafalgar Square after the 24 hour ordeal

Ashley’s ex Safiyya also broke down in tears on the day as the heartbroken mum, 34, took to her social media to ask fans to pray for her and said the pain of being without her rips her ‘body and soul to pieces everyday’.

In her emotional video she said: ‘This time last year was the hardest time of my life. I lost my little girl in the morning, which his why I wanted to come back to Azaylia’s garden.’

Turning her thoughts to her ex-boyfriend ahead of his run, she continued: ‘I’m just praying and hoping the rest of the team and Ashley and everyone else is OK on that run.

‘I know they’re finding it difficult now. Please say your prayers today for my little princess.’ 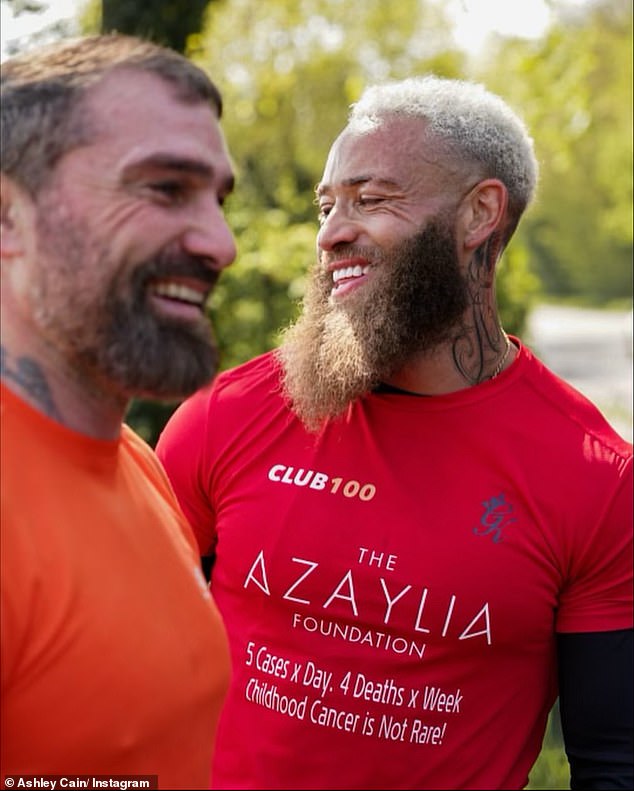 Inspiration: Ashley was joined by some familiar faces along the way including Ant Middleton 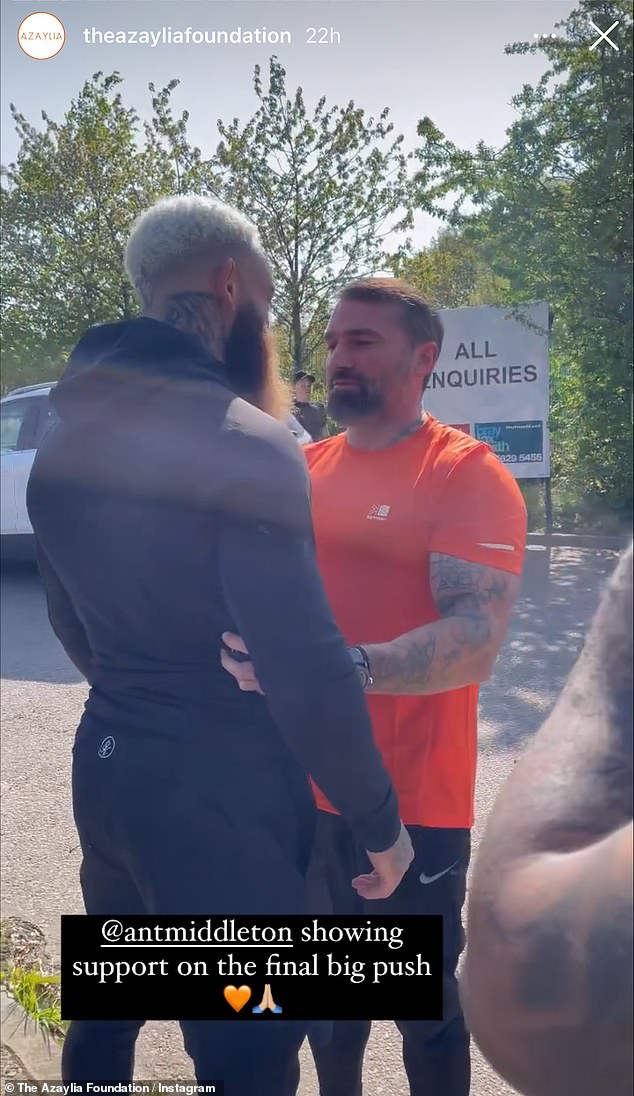 Wise words: The ex Coventry City footballer described Ant’s presence as as a ‘major turning point’ for him

The grieving mum then went on to pen an emotional tribute to her daughter on her Instagram grid including a video of her miming Whitney Houston and Mariah Carey’s 1998 duet When You Believe to the toddler.

She wrote: ‘Azaylias 1 year anniversary. A year without my daughter you are such a beautiful baby Azaylia and when I say it doesn’t get any easier I mean that with a full heart.

‘If love could of saved you I promise you would be here with me I will hold you in my heart & forever be connected with you for eternity.’

Describing the devastating toll it has taken on her she said: ‘The pain of not having my baby here on earth with me rips my body and soul to pieces everyday I open my eyes!

‘Azaylia you made me a mummy and that title is the most precious one I will treasure forever , knowing I have given birth to my hero my inspiration my daughter is something I will keep close to my heart forever. 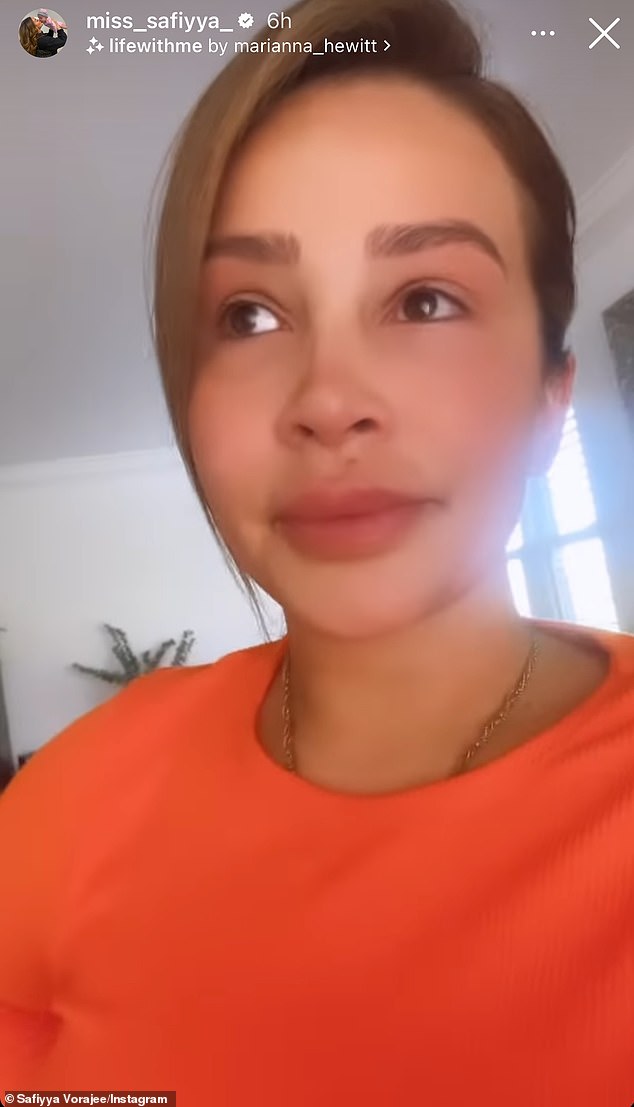 Tragedy: Safiyya Vorajee broke down in tears on her Instagram account on Sunday as she remembered her daughter Azaylia on the first anniversary of her death 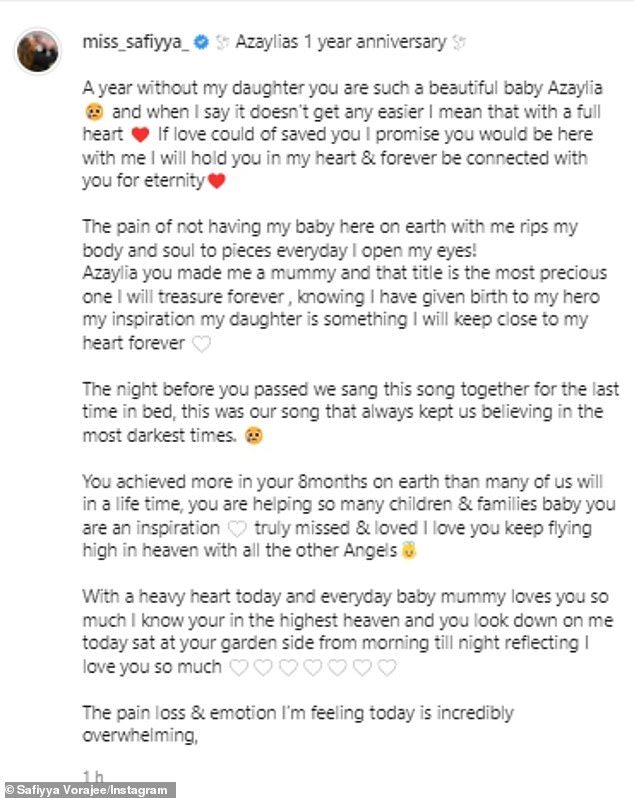 Brave: The grieving mum then went on to pen an emotional tribute to her daughter on her Instagram grid

‘The night before you passed we sang this song together for the last time in bed, this was our song that always kept us believing in the most darkest times.

‘You achieved more in your 8months on earth than many of us will in a life time, you are helping so many children & families baby you are an inspiration, truly missed & loved I love you keep flying high in heaven with all the other Angels.

She concluded: ‘With a heavy heart today and everyday baby mummy loves you so much I know your in the highest heaven and you look down on me today sat at your garden side from morning till night reflecting I love you so much.’ 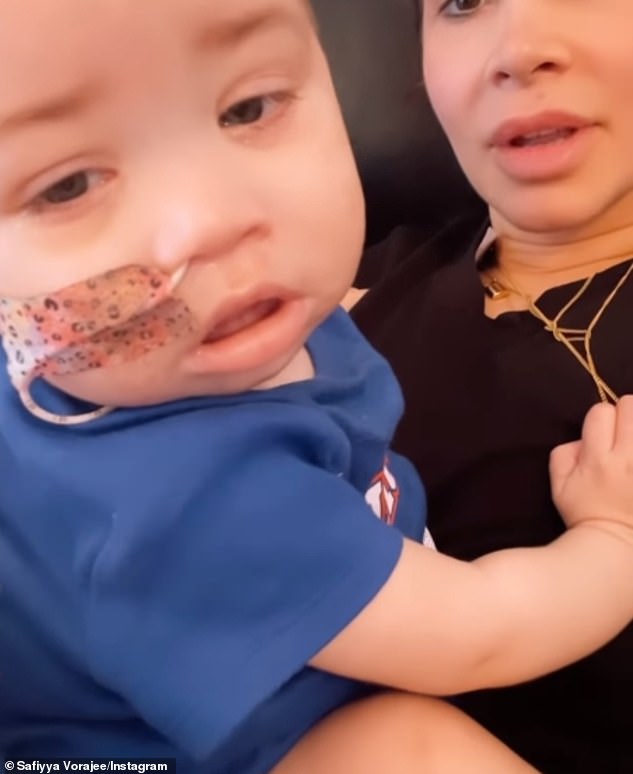 Gone too soon: Speaking about the devastation she said: ‘When I say it doesn’t get any easier I mean that with a full heart’