At least 5million children lost a parent in the first 20 months of the pandemic, study suggests

More than 5million children worldwide have lost a parent or caregiver due to Covid, researchers have found.

The toll was laid bare in modelling by a team at Imperial College London, who looked at coronavirus data in 21 countries with the highest pandemic death tolls.

They found 5.2m children under 18 worldwide suffered the death of a parent or grandparent to the virus by October 2021 — double the figure six months prior.

Fathers accounted for three-quarters of the deaths and two-thirds of bereaved children were aged between 10 and 17.

One in seven children were under the age of four.

The researchers said children who lose a caregiver at a young age are more likely to experience poverty, exploitation and mental health problems.

Some youngsters may also be more at risk of falling into gangs and violent extremism, the team warned.

At least 10,000 youngsters in England and Wales lost a parent or primary caregiver during the pandemic and 140,000 in the US, according to estimates in late 2021.

In total, there have been 5.9m coronavirus deaths worldwide, but this is thought to be a significant underestimate due to a lack of testing in many countries. 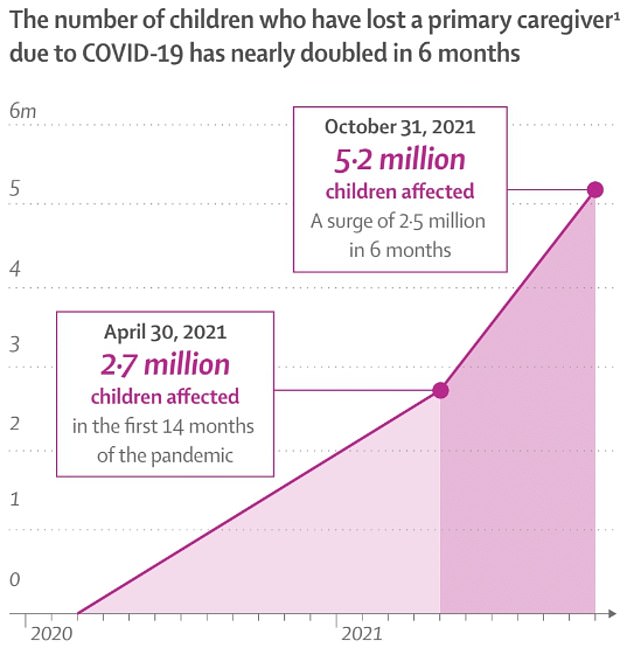 The graph shows the number of children who have lost their parent or primary care giver since the start of the pandemic. By April 2021, 2.7m children had been affected, rising to 5.2m by October 2021

The research, published in The Lancet Child & Adolescent Health, is an update to the team’s previous findings that 2.7m children had lost a parent or caregiver to Covid by April 2021.

They estimated how many children had been orphaned — which they defined as the death of one or both parents — or had lost a primary caregiver, which included the death of at least one custodial grandparents.

Rates were based on death and fertility data from 21 countries that counted the highest number of Covid deaths, including England, Wales and the US.

The team counted excess deaths – the number of deaths above what would normally be expected before the pandemic – to account for Covid fatalities not picked up by testing.

HOW MANY CHILDREN WERE ORPHANED DUE TO COVID?

The number of young people who suffered caregiver deaths was based on United Nations household composition data.

In the first 20 months of the pandemic, the team estimated 3.3m children were orphaned. A further 1.8m lost a grandparent or adult caregiver who lived in their home.

Before the coronavirus pandemic, there were around 140m orphans worldwide.

The vast majority of affected children lost a father (76.5 per cent), while the remaining quarter lost their mother.

The researchers also calculated the ages of the children affected by parent and caregiver loss based on annual birth data.

The number of children affected by parent and caregiver loss varied from 2,400 in Germany to more than 1.9m in India.

The authors noted that their findings are based on modelling, so do not measure the actual number of children who lost a parent or caregiver due to Covid.

Future pandemic responses should include monitoring systems to determine how many children have lost a parent to track their needs and provide support.

And countries should incorporate supporting children who lose parents to Covid into their national response plan.

Dr Juliette Unwin, lead author and a researcher at Imperial College London, said the team’s modelling is likely an underestimate.

For example, the World Health Organization believes Covid deaths in Africa are 10 times higher than the reported levels, which means the study’s estimates for orphanhood and caregiver loss is ‘also drastically underestimated’, she said.

‘While our current study looked at estimates through October 2021, the pandemic is still raging worldwide, which means Covid-related orphanhood will also continue to surge.’

Dr Susan Hillis, lead author and adviser to the US Centers for Disease Control and Prevention, said the findings nearly equate to every reported Covid death leaving one child orphaned or with one less caregiver.

She said: ‘That is the equivalent of one child every six seconds facing a heightened risk of lifelong adversity unless given appropriate support in time.

‘Thus, support for orphaned children must be immediately integrated into every national Covid response plan.’

Professor Lorraine Sherr, a clinical psychologist at University College London said: ‘It took 10 years for 5m children to be orphaned by HIV/AIDS, whereas the same number of children have been orphaned by Covid in just two years.

‘These figures do not account for the latest wave of the Omicron Covid variant, which may push the true toll even higher.

‘We need to act swiftly to identify the children behind these numbers, so they can be given the support they need to thrive.’