Austrian abortion provider 'inundated' with thousands of calls from women, especially in the south

A non-profit clinic in Austria that ships abortion pills from India to states in the U.S. where the procedure has been restricted or banned claims it has been inundated with thousands of calls from women after the Supreme Court’s plans to overturn Roe v Wade were revealed.

Dr Christie Pitney, a clinician at Aid Access, told DailyMail.com that the clinic has received at least 1,600 calls — a tenth of their annual inquiries — in just one week. Requests were reported from all 50 states — but particularly those in the south, she said.

Pitney said many of the women who called were already pregnant, but a ‘huge number’ were also trying to get their hands on the pill pre-emptively to store at home in case it was needed at a later date.

Patients were from ‘all walks of life’ and included everyone from teenage daughters to women in their late 40s who already have children, she said.

Earlier this month, it was revealed that the Supreme Court may soon overturn the landmark Roe v Wade ruling that protects the right to abortion across the US. Politico obtained a draft copy of the court’s decision, which is expected to be published over the summer.

More than half of U.S. states are certain or likely to ban or restrict abortion for women should the ruling be abandoned, according to policy organization the Guttmacher Institute.

Pro-choice groups have raised concerns the bans will leave many women unable to access the pills in medical emergencies, and leave little help for rape victims. 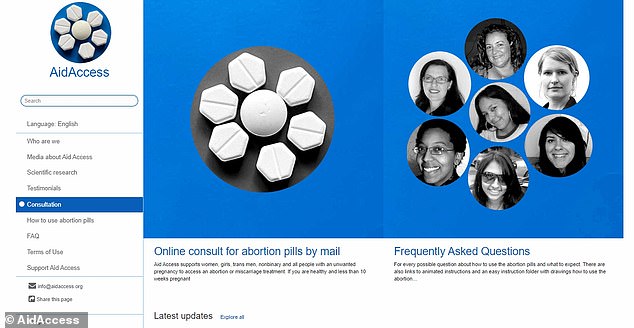 Aid Access prescribes abortion pills to women across all 50 U.S. states. In those with few restrictions they are prescribed by a U.S. clinician, but for those where the practice is restricted they are sent out from India after being prescribed by a European doctor 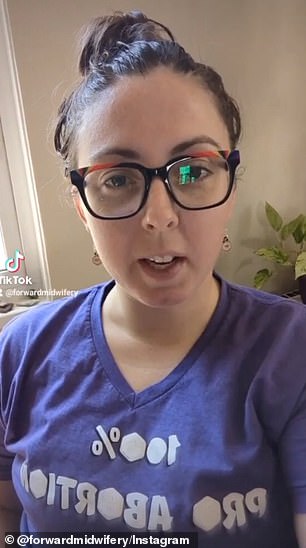 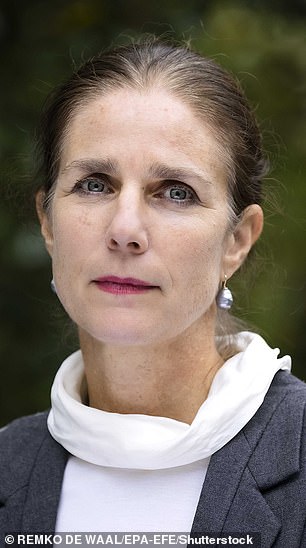 Dr Christie Pitney, a clinician at Aid Access (left), revealed patients were everyone right from teenage daughters to women in their late 40s who already had children. Aid Access was founded by Dutch abortion activist Dr Rebecca Gomperts (right)

Women aborting pregnancies initially take one pill — containing a drug called Mifepristone — at home or in a clinic before taking a second — which holds Misoprostol — a day to two days later.

Food and Drug Administration (FDA) guidance says they should be taken within 10 weeks of falling pregnant.

Allowance for abortion pills being sent by mail was made permanent by the FDA in December, after the measure was brought in during the Covid pandemic to ensure women could still access abortions.

Abortion pills by post was made permanent in the U.S. at the end of last year.

Previously women seeking to terminate a pregnancy had been required to go in person to a clinic with a specially certified doctor.

But early last year the Food and Drug Administration began allowing women to receive the pills by post because of the Covid pandemic.

In December, it made this change permanent.

It said: ‘The agency conducted a comprehensive review of the published literature, relevant safety and adverse event data, and information provided by advocacy groups, individuals and the applicants to make this decision.’

Aid Access prescribes abortion pills to women via a consultation with a U.S. doctor for those in states where it has a licensed clinician for up to $150.

But for women in 29 states that have restricted virtual abortions or where it does not have a licensed clinician it prescribes the drugs after a consultation with a European doctor before shipping them from India for up to $110.

Pitney said that in a typical year Aid Access send the pills to about 10,000 women in the U.S. following a consultation.

But she said that in the last week they had already received more than 1,600 requests.

They have received thousands more inquiries, she added, with traffic to the website spiking 2,800 percent in a week.

Pitney told DailyMail.com: ‘We have seen a tenth of what we saw in the entire year last week. That is an enormous uptick.

‘We are so inundated that we are prioritizing patients who are pregnant.’

Asked who was getting the abortions, she said: ‘The majority of folks who access this in the U.S. are parents already.

‘For us, we have everyone from teenagers right up to people in their late 40s, including rich and poor, rural and living in the city, white and people of color.

‘Our patients are from all walks of life.’

‘They are [also] those who have had bad pregnancy histories, people who don’t want to get pregnant again, and people who are in same-sex relationships but want them on hand just in case.’

She added: ‘Everyone is terrified, everyone is very worried about what the future holds, people just want to be prepared for it.’

Pitney recommended women should have the pills available in their medicine cabinet just in case, saying, nothing the pills could take two to three weeks to arrive.

Aid Access says abortions it provides in the U.S. are legal because patients have a prescription filled out by a licensed clinician.

It adds it is also legal to have the pills ready at home because this is also done for other medications such as those for travel and altitude sickness.

Pitney admitted, however, that the situation is ‘more nuanced’ in three U.S. states — Nevada, Oklahoma and South Carolina — which have criminalized self-managed abortion.

It comes as Democrats are set to fail in their attempt to bring abortion protections provided by Roe v Wade into law because they do not have enough votes.

The party tried to get the same bill through in February — although the measure has more urgency now since the draft was leaked.

Its attempts to bring the bill to a full floor vote are being stopped by three senators. These include moderate Democrat Joe Manchin from West Virginia, who says he will not support it and already went against the party on the issue earlier this year.

The party is now aiming to sway Republicans Lisa Murkowski of Alaska and Susan Collins of Maine to vote with them, who are both known to be pro-choice.

The House already passed its version of the Women’s Health Protection Act, which would codify Roe v. Wade into law, but the Senate was unable to do so with the trio of moderates against making abortion rights federal law.

How unhealthy is YOUR life? Brutal NHS test ranks you on a scale of 1 to 10