Avril Lavigne cut a casual figure on Friday as she enjoyed a spot of retail therapy in Los Angeles.

The singer, 37, went bralass for the outing flashing a hint of underboob beneath her white cropped top.

The loved up couple, who have been engaged since April, appeared in high spirits as they perused a luxurious furniture store in swanky Malibu. 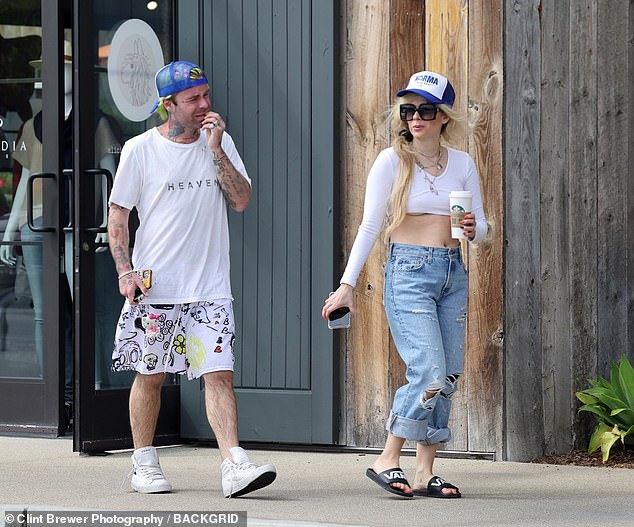 Day out: Braless Avril Lavinge, 37, flashed a hint of underboob in a white cropped top and ripped jeans as she stepped out with fiancé Mod Sun, 35, in LA on Friday

The Complicated singer showed off her incredibly taut midriff in the ensemble as well as a sparkling naval ring.

Avril matched her skimpy top with a pair of ripped turned up jeans as she slipped her feet into Vans sliders.

Shielding her eyes behind oversized sunglasses the star wore a blue and white trucker hat from her beau’s own line emblazoned with the words: ‘Korma Mod Sun’. 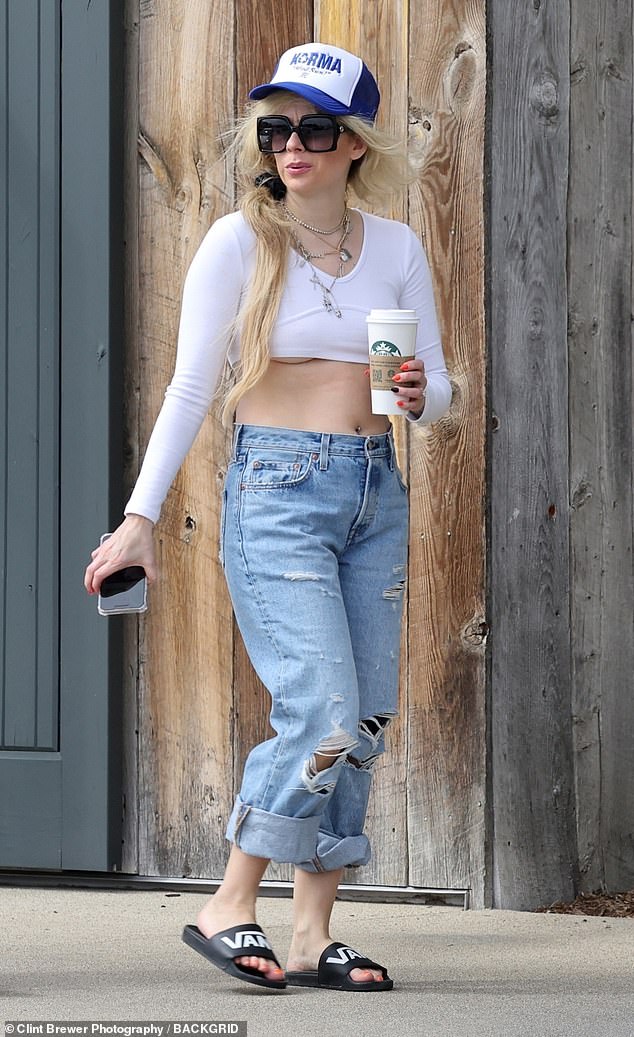 Gorgeous: The Complicated singer showed off her incredibly taut midriff as well as a sparkling naval ring 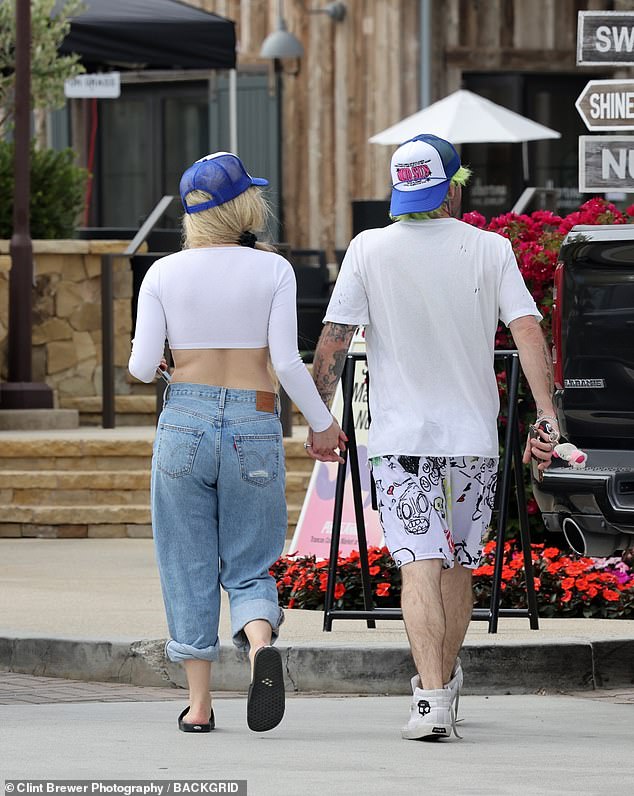 On the move: The loved up couple, who have been engaged since April, later perused a luxurious furniture store in swanky Malibu

Opting for a fresh face clear of make-up, the blonde beauty styled her long luscious locks to one side with a large black scrunchie.

Accessorising the look with a splash of silver jewellery, Avril sipped from a large Starbucks coffee cup – which she grasped with her striking multicoloured manicure.

Completing the look with white high-top trainers the singer showed off his toned and tattooed arms.

Matching hats with his partner, opting to wear accessory backwards on top of his bright green hair.

This comes after Mod popped the question before later confirming the news on Instagram in April. 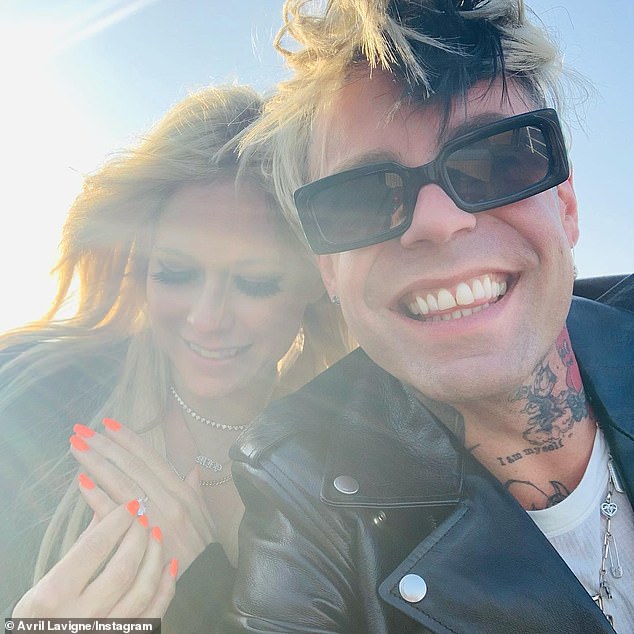 Mr and Mrs: This comes after Mod popped the question before later confirming the news on Instagram in April

The musician shared a collection of images from the proposal in Paris. One showed him down on one knee in front of Avril and another revealed her diamond engagement ring is heart shaped.

The Minnesota native also added a gushy note for his future wife that said he fell for her the day they met.

‘The day we met I knew you were the one,’ began the star, whose real name is Derek Ryan Smith. ‘Together forever til our days are done. 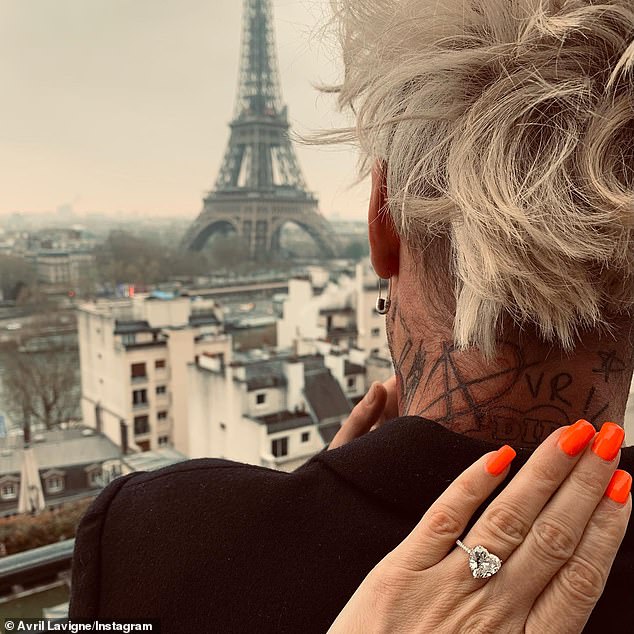 It’s a heart! According to People, the ring is from XIV Karats in Beverly Hills; Mod Sun was also showing off the Avril tattoo behind his neck

‘I had a dream where I proposed in Paris. I pulled out a ring + asked you to wear it. I was on one knee as I looked in your eyes. You’re too beautiful for my words to describe. I grabbed your hand + took one last breath… I said ‘will you marry me?’ + she said ‘yes’.

‘It was the most perfect, romantic proposal I could ever ask for,’ Avril told People on Thursday.

And then she described the romantic scene. 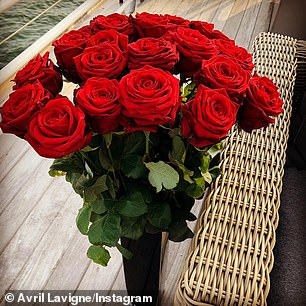 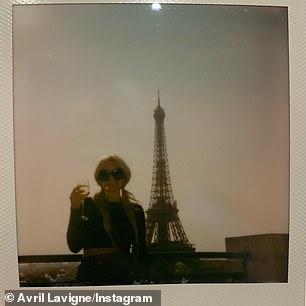 What says love better than flowers: A dozen long stemmed red roses were also seen during the romantic proposal

‘We were in Paris on a boat in the Seine River. We had a violin player, champagne and roses. It felt like time stood still, and it was just the two of us in the moment.’

Avril also described the ring he had custom made at Beverly Hills jewelry store XIV Karats.

‘It has the words ‘Hi Icon’ engraved in it, which were the first words he ever said to me,’ she explained. ‘And it has Mod + Avril on the inside.

‘He knew from the very beginning I wanted a heart shaped diamond because on the day we met, we had matching heart shaped paved rings on. We’ve worn them every day since, so its only fitting to have a heart-shaped engagement ring. I love it so much.’ 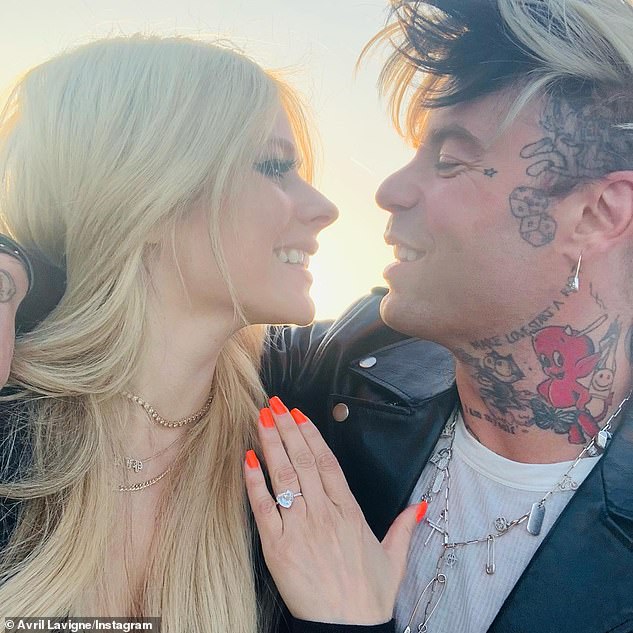 A sweet note: ‘The day we met I knew you were the one,’ began the star, whose real name is Derek Ryan Smith. ‘Together forever til our days are done’