German chemicals giant BASF transferred a record £40million dividend from its British business at the same time as it borrowed £1billion from taxpayers, The Mail on Sunday can reveal.

The loan was the biggest drawn under the Bank of England’s Covid Corporate Financing Facility, launched after the pandemic struck – dwarfing the sums handed to airlines and manufacturers such as easyJet, Ryanair, Nissan and JCB.

The scheme for large companies offered loans with interest rates of as little as 0.3 per cent a year, and let foreign firms apply if they had a material presence in the UK. 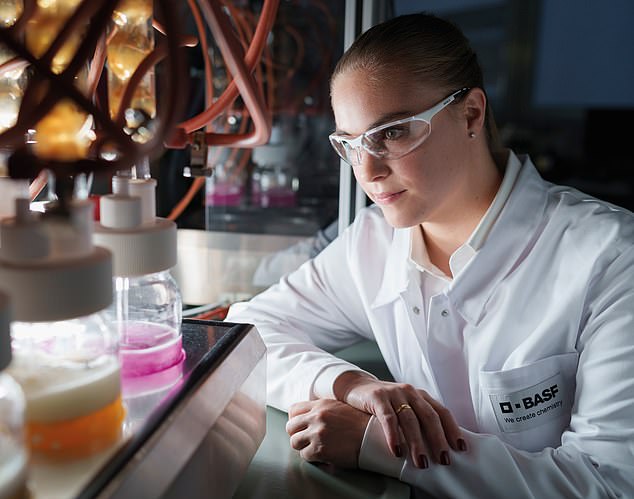 Payment: BASF makes chemicals for a number of industrial processes

BASF, which operates plants in Bradford in West Yorkshire and Alfreton in Derbyshire, is understood to have agreed the facility within days of the scheme’s inception in March 2020.

It was only in May that year – after concerns were raised by MPs and campaigners – that the Treasury tightened lending terms to prevent companies from handing out bonuses and dividends while making use of the facilities.

Therefor BASF’s loan was not covered by the restrictions on rewarding executives or investors.

Documents seen by The Mail on Sunday reveal that BASF transferred a £40million dividend out of one of its UK subsidiaries in the year to the end of December 2020.

The money was then transferred to BASF UK Holdings Ltd and, from there, paid to its German parent BASF Societas Europaea.

Documents filed in the UK indicate the dividend is the biggest transferred from its UK holding company for a decade and twice the size of its next biggest payment of £21million, paid in 2016. Last year, The Mail on Sunday revealed that BASF paid directors and staff a €360million (£310million) bonus from its German business.

The €40billion global manufacturer, which has ten UK sites, also gave investors a €3billion final dividend for 2020 – the same as the previous year.

Until now, however, it was not known if money had been paid out of the UK. The firm was contacted for comment about the revelation.

Chairman Martin Brudermüller said of last year’s group dividend: ‘A reliable dividend payment is a priority for us even in difficult times.’

The Mail on Sunday also revealed last year that the US owner of Boots handed its billionaire boss Stefano Pessina nearly £50million in dividends days after the pharmacy drew £300million from the loan scheme.

Former Chancellor Rishi Sunak has come under fire over Covid loan schemes rushed out at the start of the pandemic. Lord Agnew, who resigned as a Treasury Minister in January, last week accused Sunak of peddling a ‘fairytale’ over the effectiveness of the schemes.

Recent criticism has centred on smaller ‘bounce back loans’.

The peer estimated £5billion had been lost to fraud. Earlier this year, Sunak set up a Covid loan fraud team to ‘chase down fraudsters’.