BBC’s flagship political panel programme crossed the Irish Sea as Fiona Bruce joined guests and audience members in Belfast to discuss events discussing the province. Discussions in the Northern Irish capital tackled an array of issues, including the Brexit Protocol, partygate and the cost of living crisis. However, panellists and audience members were also able to give their two cents on whether the Emerald Isle should be united or if Ulster should stick with the United Kingdom.

John Finucane, who defeated Lord Nigel Dodds in Belfast North at the last general election, suggested a poll on Irish reunification will come at some stage.

He said: “I think there is a border poll coming at some stage.

“And I also think that Brexit has been a huge catalyst for what could potentially be the breakup of the Union of the United Kingdom as we currently see it.”

The ex-Lord Mayor of Belfast added: “Nobody is advocating for a referendum, a border poll, tomorrow morning because that just repeats the reckless mistakes of Brexit.”

Emma Little-Pengelly, an ex-MP from the Democratic Unionist Party, challenged Mr Finucane and suggested the anti-UK vote has stood still since the Belfast Agreement was signed in 1998.

The Lagan Valley MLA said: “I think we need to be very careful to not buy into some spin around this. 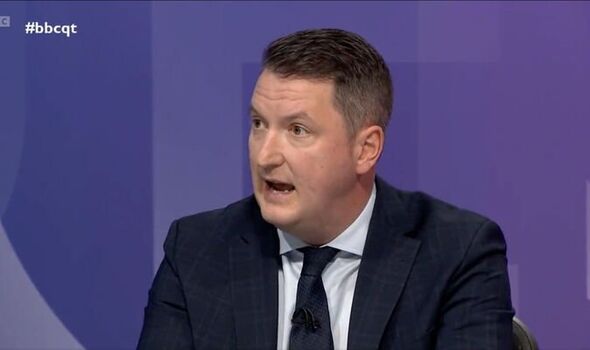 “In 1998, the combined nationalist vote was around forty percent.

“In 2022, the combined nationalist vote is still forty percent.

“So, although the leadership of Sinn Fein are trying to say there is a momentum behind this, things haven’t changed.”

Ms Little-Pengelly then explained why she supports Ulster remaining a part of the United Kingdom.

“I believe our future lies in the United Kingdom and that’s what I am going to be working and fighting for.”

Ms Little-Pengelly has also suffered defeat at the hands of nationalists after she lost the marginal seat of Belfast South to the Social Democratic and Labour Party on a swing of 18.5 percent.

Speaking to Sky News, the Leader of the Irish Opposition said: “Without a shadow of a doubt I believe we will seek constitutional change in the course of probably the next decade.”

Shortly after the Stormont election, the Great Yarmouth MP said: “Sinn Fein haven’t gained seats, we haven’t seen a growth in the nationalist vote and indeed the unionist vote is still larger and the number of seats held by unionist parties is still larger.

“I think the focus at the moment quite rightly is on getting Stormont back up and running, getting the money that is moving from the UK Government to Northern Ireland out to people in Northern Ireland so we can move forward on domestic issues, get the healthcare reform that people want to see and we want to get the Protocol resolved for everyone in Northern Ireland.”

DON’T MISS
‘We had to implement them!’ Boris forced to justify the rules he broke [REPORT]
‘Wine spilled on the wall’ Four grisly details in the Sue Gray report [REPORT]
Tory Party on course to ‘lose next general election’ MP warns Boris [REPORT]

The ex-Justice Secretary, who was born in the Welsh town Llanelli, said: “I would certainly be, as a friend and fellow Celt, saying stay with us because I still believe the values that make the UK great are still worth protecting and supporting.”

An opinion poll conducted by the Institute of Irish Studies at the University of Liverpool in April found that just 30 percent of voters in Ulster would back reunification and 45 percent would stick with the UK.

When weighted to discount those unsure or who do not know, the survey suggested almost two-thirds of voters would back Britain.

Northern Ireland held a border poll in 1973, although it was boycotted by nationalists in Ulster.

The result was a conclusive victory for unionists, with 99 percent of votes counted and 57 percent of all registered electors backing the Union.