Bears sink their teeth into the tech titans: Should you buy or run?

US technology stocks, not so long ago the stock market’s superstars, have tumbled.

This descent presents a dilemma for anyone who holds these shares directly, or through funds. If you have backed the Silicon Valley names, should you stay, or should you go now?

Are the falls a sign that the party is over, or a buying opportunity, on the presumption that bad news is priced in? 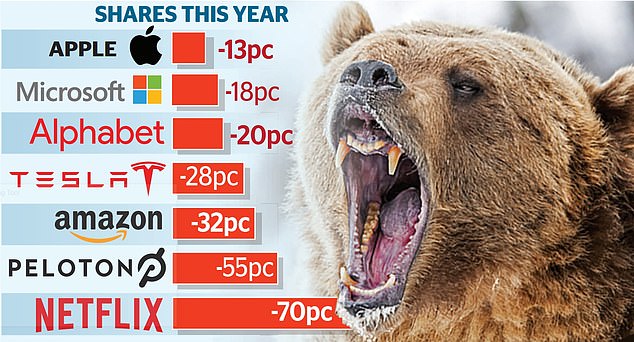 In the past fortnight, Google’s owner Alphabet, Amazon, Apple, Meta and Netflix – the titans regarded as a barometer for the sector – detailed the factors that spell bad news for their operations. This list includes lower advertising expenditure, more competition, supply chain issues and the war in Ukraine.

There are other challenges. Shares in Meta, the Facebook and Instagram business, are down 39 per cent this year, depressed by the threat of regulation – and the popularity of TikTok, the Chinese video app considered cooler than Instagram’s Reels. The appeal of all tech shares lies in their future profits.

Meta boss Mark Zuckerberg is promising a terrific 2030, when its metaverse adventure should come good.

But higher interest rates make such rewards relatively less valuable. Rates are rising to curb inflation, but if this policy fails, stagflation, that toxic mix of surging prices and sluggish growth, could ensue.

At the beginning of this decade, it was assumed US tech businesses, whose power has been built on their ability to disrupt established markets, could shrug off adversity.

But the 33 per cent drop this year in the shares of Scottish Mortgage, the UK’s bestknown technology trust, suggests opinion is shifting.

Ark Innovation, the most famous US tech fund, has also subsided in value since January.

Cathie Wood, its manager, however, contends that her stock picks are ‘deep-value’ businesses that should revive. This is a controversial stance.

But it is easy to forget that some disposals of tech stocks have been prompted by profit-taking and the belief that the hyper-growth era is past, rather than deeper disenchantment.

Shares in Amazon are still 980 per cent higher than a decade ago. Although hit by lower consumer spending, the firm is prospering from the cloud computing boom.

Over the past year, sales of this service (which involves every aspect of computing from the provision of servers and storage) have soared by 42 per cent at Amazon – and also at Alphabet and Microsoft. This trend should help you differentiate between tech stocks that are worth holding and those whose prospects may be limited.

Stephen Yiu, manager of the LF Blue Whale Growth Fund comments: ‘There are cash-generative companies that offer hardware, software or services vital to an increasingly digitised world, and others whose valuation was driven by speculation rather than solid fundamentals, like Zoom and Peloton.

‘The bursting of this low-quality stock bubble has driven down the high quality shares.’

Blue Whale holds Alphabet, Microsoft and the semi-conductor group Nvidia. Liu acknowledges that their prices may descend further. But he says: ‘We will eventually see share prices more indicative of these companies’ importance to a world reliant on technological and digital expansion.’

There is a consensus that recovery will take time, suggesting that investing now is only for those with ample resources and a taste for a gamble.

Opinions also differ as to which stocks should be deemed high quality. But Faangs – Facebook, Amazon, Apple, Netflix and Google – which used to sum up the must-have shares, could be replaced by Manta – Microsoft, Apple, Nvidia, Tesla and Amazon.

These are owned by such popular funds and trusts as F&C, Polar Capital Technology, Fundsmith and Scottish Mortgage (the last two are in my portfolio).

Scottish Mortgage has bets on a variety of listed and unlisted tech firms, including Byte Dance, the TikTok group. The trust is a low-charge (the annual fee is 0.34 per cent) high-risk play, not the bulwark of a portfolio. If you would like a counter balance, Ben Yearsley of Shore Financial Planning suggests the ‘extremely well-diversified’ River & Mercantile Global Recovery, and also Polar Global Insurance. In the short term, the more hapless tech shares may be the subject of bid rumours.

Shares in Peloton, the pandemic fitness darling, are 80 per cent lower than a year ago. Apple or Nike are said to be potential purchasers.

The argument will continue as to whether Peloton, a company that sells a high-margin product like a bike with an accompanying app, is actually a tech stock at all. More pertinent is to reflect on the importance of never being too overexposed to tech, or indeed any other sector.