Bethenny Frankel, 51, is seen in a bikini after sharing  she does not exercise

Bethenny Frankel was seen in a floral print bikini when on a sandy beach in The Hamptons on Long Island in New York on Tuesday.

The 51-year-old reality TV star looked toned and tanned as she oozed confidence when in the tiny swimsuit – which consisted of a push-up bra style top and hip-hugging briefs – adding a straw hat, tinted sunglasses and a white blouse that fell off her shoulders.

This sighting comes after the Real Housewives Of New York vet said that she does not exercise or diet. And she added that she was actually heavier when she did watch her figure more.

Life’s a beach when you are Bethenny: Bethenny Frankel was seen in a string bikini when on a sandy beach in Miami, Florida on Tuesday. The 51-year-old reality TV star looked toned and tanned as she oozed confidence when in the tiny swimsuit, adding a hat, sunglasses and a white blouse.

The TV icon appeared in a TikTok video this week where she was asked about her diet and exercise regime by fans.

The Bravo star said she is not hitting the gym.

The Skinnygirl founder continued: ‘I was probably 20 lbs. heavier in my 30s and I was always on a diet,’ Frankel admitted, adding that she no longer believes in the idea of exercising to work off calories consumed.

While she eats what she wants, the reality star made it clear she never binges and doesn’t ‘do weights.’ 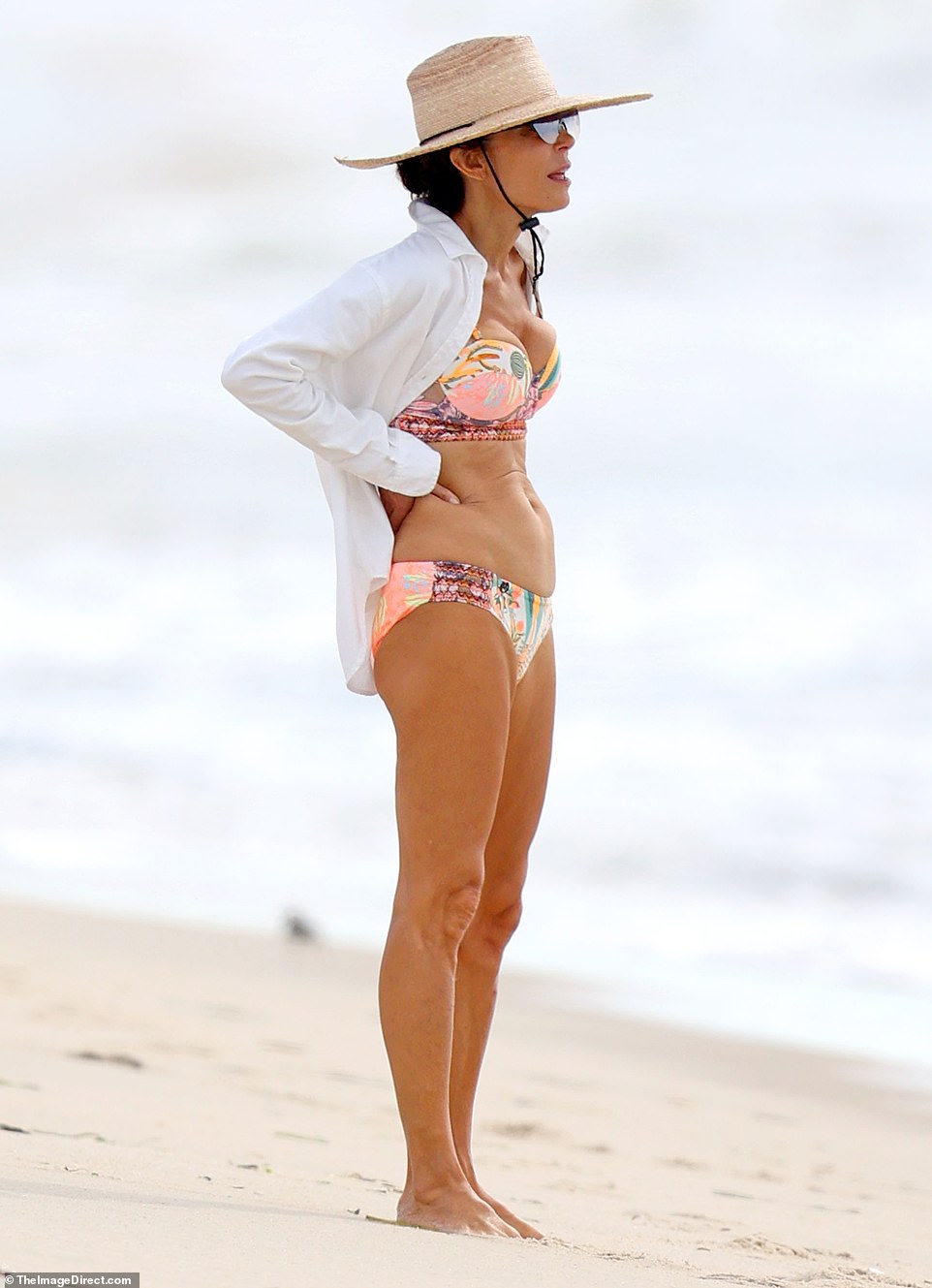 No workouts, thanks: This sighting comes after the Real Housewives Of New York vet said that she does not exercise or diet. And she added that she was actually heavier when she did watch her figure more

The chef also pointed out that anyone who feels ‘shackled and imprisoned by dieting’ is going to be unhappy.

In June, she took to Instagram to explain how she grew to appreciate her body throughout the years.

‘Here’s the unfortunate truth. I rarely exercise. I hate water. I prioritize sleep but fail. I eat whatever I want but never binge. I run around like a lunatic with endless energy,’ she typed out. 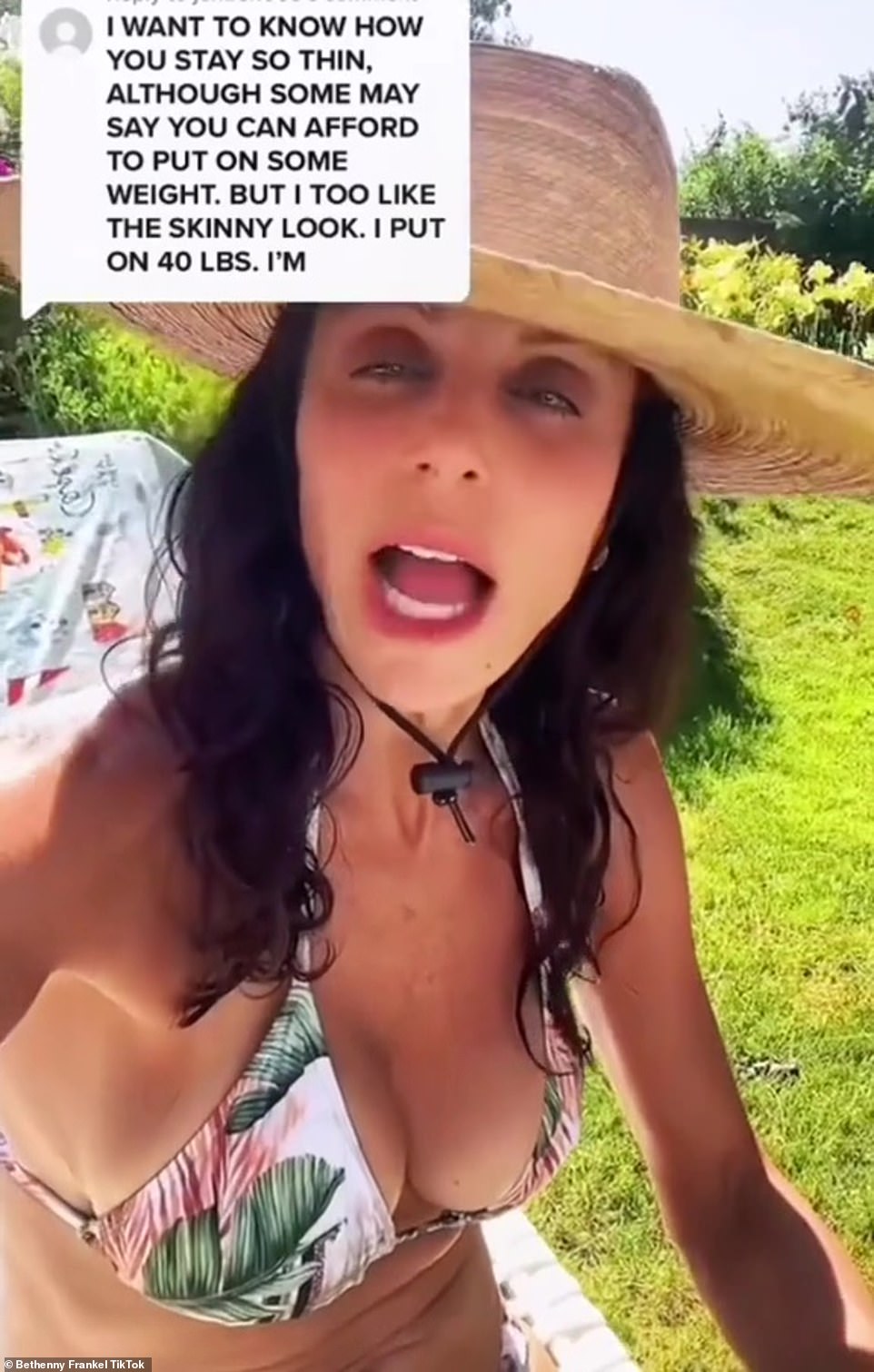 Fitness: While took a plunging floral bikini and wide-brimmed hat in the footage, the mogul explained her keys to staying fit

‘In my 20s & 30s I dieted & exercised endlessly & and was much heavier & less happy with my overall appearance,’ the TV personality said.

The star then began to open up about her body, and the positive path that she has chosen.

‘I have good skin but I sag in some places & am thin but not in any notable muscular shape by anyone’s standards. I choose balance and happiness & doing the best that I can. When I’m 90 I won’t wish I exercised more, that’s for sure,’ she added at the very end. 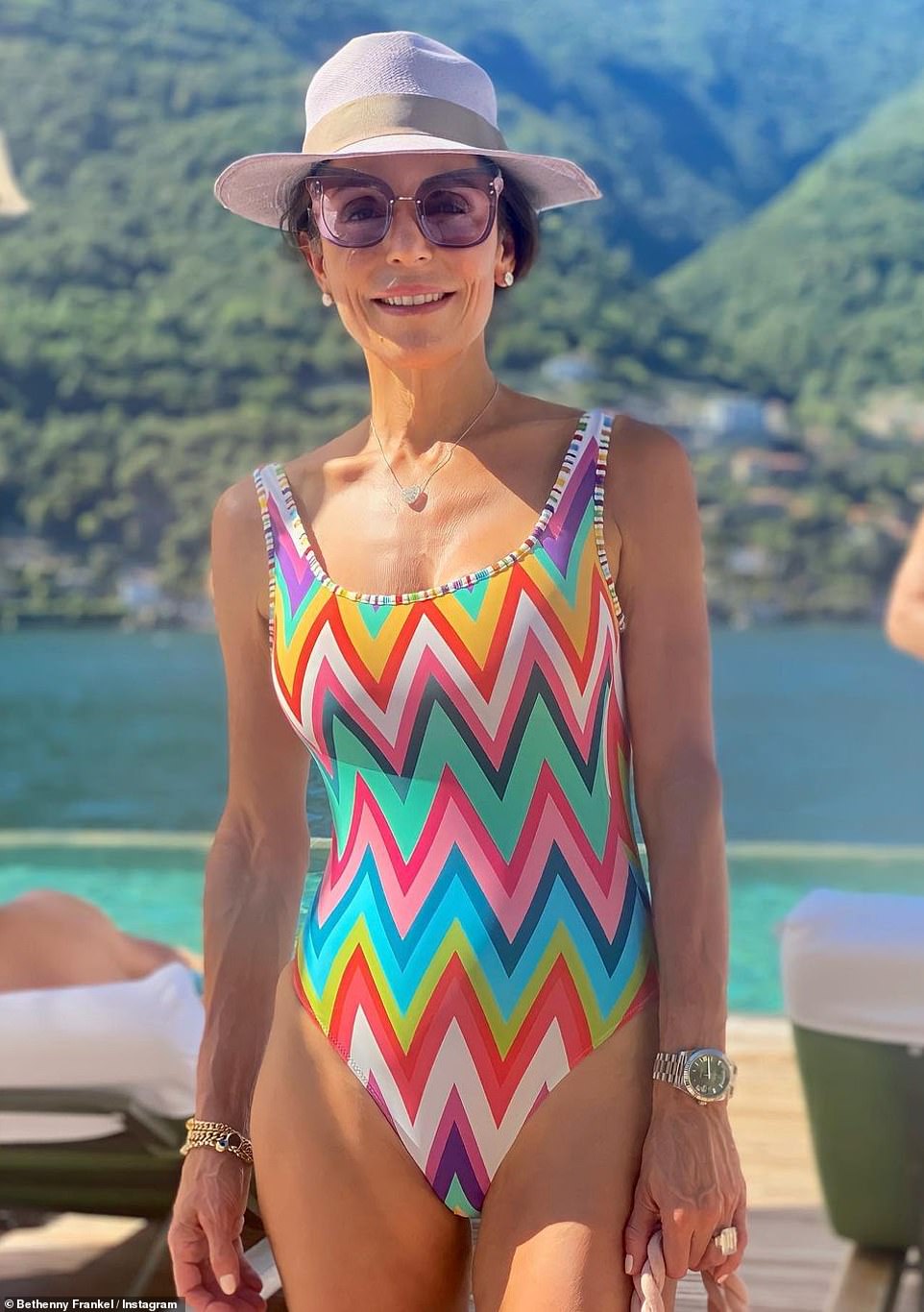 She certainly has swimsuit confidence: The star often shares images to Instagram where she is in very little

In a Twitter post earlier in the year, the author reacted to people commenting on her appearance.

‘My favorite is people telling me that I’ve aged & that I don’t look how I used to…Umm yeah, wait…Am I doing it wrong? Are we not all aging?’ she typed out.

Is there a difference? Bethenny said she was 20 pounds heavier when she worried about diet and exercise. On the left she is seen in 2009 and on the right she posed in 2019

The star gave a heartfelt acceptance speech when she was handed the award. According to People, she stated, ‘Thank you, MTV. Thank you to the audience who has invested in a flawed and transparent person.’

Bethenny also discussed how reality TV was a positive outlet for her and how it eventually led to her other future successes.

She said that reality TV was a, ‘platform to authentically be myself, be honest about my flaws, my struggles, being broke and alone with no safety net.’

The Real Housewives of New York City star has definitely come a long way, from publishing best-selling novels like, Business Is Personal, and also creating her own company called, Skinnygirl.