Beware – it's easy to get lost in this dark and twisted Forest: PATRICK MARMION reviews The Forest

Florian Zeller’s plays are many things — but easy to understand is not one of them.

The Forest, the latest offering from the French author of dementia drama The Father, which became an award- winning film starring Anthony Hopkins and Olivia Colman, is no exception.

Making its world premiere in Hampstead this week, it stars Toby Stephens, Paul McGann and Gina McKee in a story about a respected Parisian surgeon concealing a tawdry affair with a younger woman (Angel Coulby). 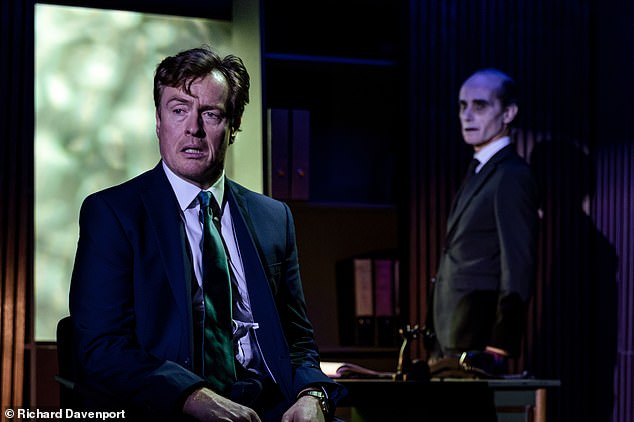 No way out: Toby Stephens (left), a surgeon caught in a midlife crisis, is haunted by Finbar Lynch’s Man In Black

Featuring elements of film noir, it’s an emotional and psychological labyrinth, but one without a centre, or an exit.

The surgeon, who is played by both Stephens and McGann (confused? just you wait), is a man who is slowly, painfully cracking up.

When his marriage to his steely, soignée wife (McKee) comes under threat, he makes a shocking decision that only leads him deeper into the circles of hell.

Best seat in the house

Ian McKellen and Patrick Stewart star in Harold Pinter’s 1974 play about a couple of old writers who meet in a Hampstead pub before heading home for more drinks and tall stories. (ntathome.com, £9.99 per month).

Cue the entry of the Man In Black, a white-faced Finbar Lynch as a Nosferatu-like conscience and infernal investigator, who’s on a mission to haunt him.

Scenes artfully repeat each other — with tiny twists — in a plot that cunningly avoids finding a single path through a play that leads the surgeon into a forest of darkening shame and punishment.

The temptation is to join the man in attempting to solve the riddle of his experience, but the reality is that there is no solution.

It’s an indecipherable nightmare in which it’s better to just let go . . . and submerge.

The sexual politics is somewhat dated, involving the French obsession with a femme fatale going off the rails, and taking her man with her.

And there is also the cliche of Eastern European gangsters stepping in to clear up the mess — for a price.

But Jonathan Kent’s production is never less than horribly watchable. Nor could I take my eyes off designer Anna Fleischle’s elegantly stylish set. We have the surgeon’s swanky apartment with parquet floors and dark, teal-coloured walls. A deliberately tasteless painting on the back wall echoes the seedy love nest hovering above; while, to the side, we have the spartan consulting room where our anti-hero surgeon attempts to elude his demons during his day job.

A closing tableau, tying together all Zeller’s plot strands, is a little obvious. Until then, though, this is a poisonously accomplished and chillingly weird piece of work.

No less inscrutable, but much lighter in tone, a new production of Eugene Ionesco’s The Chairs at the Almeida offers a masterclass in clowning from two of the finest living exponents of that oft-maligned art: Kathryn Hunter and Marcello Magni (with support from Toby Sedgwick).

The play is Ionesco’s 1952 classic of absurdist theatre, in which an ageing couple play host to a party of invisible guests, each of whom is supplied with a chair to sit on . . . until the stage becomes so full that there’s no room left for the actors.

Magni and Hunter — who are a married couple in real life — are two of the original members of Simon McBurney’s revered Complicité theatre company. They came to fame in the 1980s, and few can match their skill at movement and physical comedy. So it goes here, with mimed routines including swapping around a real and an imaginary tea cup.

But what makes the performance of these two actors, who know each other so well, particularly endearing is the warmth of their relationship.

Magni wears a Chaplinesque suit and sports a tuft of white hair in the clear sky of his bald pate.

Hunter, in a black pinafore dress, croons over him and lauds his ego, warming him with girlish smiles and fondly calling him ‘crumpet’.

They bring a nonsensical world to cheerful life, while Sedgwick hands out props as the story builds in a green and orange circus tent with a revolving middle.

At nearly two hours, it’s long — and will no doubt be best appreciated by theatrical aficionados. But as a homage to an antique comedy, performed by two fine antique actors, it’s a treasure.

You should be dancing! 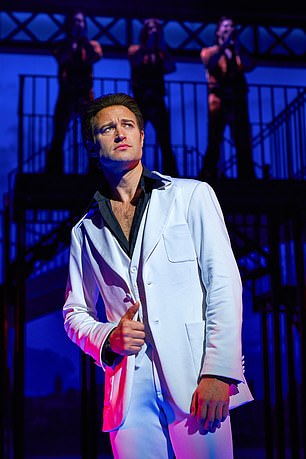 Maybe the story could be snappier, but the music and moves will make you feel you should be dancing — yeah!

Saturday Night Fever is surely the greatest soundtrack of all time, but the seeming innocence of the Bee Gees, with their falsetto voices, makes it easy to recall the film as a sort of glitterball dream.

In fact, set among often sexist, racist, working-class Italian-Americans from the depressed Bay Area of New York in the 1970s, the picture was rough and real.

I loved its grittiness, but few audiences today can see past the offensive attitudes.

So it’s wise that Bill Kenwright’s handsome new revival of the stage musical keeps a lid on those darker themes. Besides, audiences are less interested in the domestic travails of our hero Tony Manero than they are in the Bee Gees’ music, and in reliving memories of John Travolta as the paint shop salesman who comes alive at weekends, as a dance floor legend.

The best scene is when Tony strips off his working clothes . . . and pulls on the famous white suit, to become a disco god — to the tune of Too Much Heaven.

Few performers would be brave enough to follow in Travolta’s strutting footsteps, so full credit to dancer and former Casualty star Richard Winsor (right), for having a go. His accent is less agile than his toes, and at nearly twice the age Travolta was when he took the role, he doesn’t so much explode on the dance floor, as stomp and spin with verve.

Among Tony’s gang, Kevin O’Dwyer stands out as the troubled Bobby, who’s got a girl pregnant and doesn’t know what to do. O’Dwyer is a natural — and he can hold a tune, too, in his rendition of Tragedy.

But it’s leggy Olivia Fines who really pops the eyeballs, as Tony’s reluctant dance partner Stephanie, who dismisses him with a snarl of ‘You ain’t got no class!’

Three Bee Gees impersonators with the band at the back of the stage are squeak perfect — one bald, one fuzzy, one wavy; all wearing gold lamé.

But the show’s other great feature is Gary McCann’s spectacular staging, which silhouettes fire-escape platforms against breathtaking projections of the Manhattan skyline.

Maybe the story could be snappier, but the music and moves will make you feel you should be dancing — yeah!

Why no man is an island when Sheila’s involved

The playwright was persuaded to swap genders by director Joanna Read, and he wittily acknowledges his initial doubts — ‘I thought what happens could only happen between men. It took Joanna to remind me that shoddy, childish and viciously destructive behaviour is not the exclusive preserve of the male sex’ — and this enjoyable gender-bent production proves them right.

Four female colleagues are taking part in the exercise in the Lake District. Sheila (Judy Flynn) is team leader and manages to sink their boat and strand her team on an island, much to the irritation of sarcastic Denise (Abigail Thaw).

Their one phone dies and food rations are lost in the water; soon they are cold, wet and hungry.

Will fragile Fay (Sara Crowe) make it through the night, or will Julie (Rina Fatania) save the day with her massive backpack, stuffed with what appears to be the entire stock of an outdoor sports shop?

The play starts as a breezy comedy but Firth hints at things rumbling underneath. Yet while Liz Cooke’s set may be reminiscent of a Paul Nash World War I painting, there’s no warfare here, rather four ‘hangry’ women — albeit with some very tart lines as a few home (or office) truths emerge.

Until February 19, then touring.

Gigi Hadid brings daughter Khai, one, on outing with sister Bella and their mother Yolanda