The news comes following a controversial visit to the kingdom by the President in which he met with the de facto leader, Mohammad Bin Salman. The Crown Prince has been largely accused of ordering the murder of Saudi journalist Jamal Khashoggi, something the CIA confirms they believe is true, yet the young royal denies it.

The latest arms deal will see two deals with a combined total of $5bn, selling various equipment to the oil-rich state.

First, will be a $3.05bn (£2.5bn) deal to sell Patriot missiles to Riyadh, with the main contractor for the deal being Raytheon, coincidently, the former employer of the current Defence Secretary Lloyd Austin.

Patriot missiles are primarily designed to protect the skies against incoming projectiles, frequently seen in Israel in recent times.

According to the Pentagon’s Defence Security Cooperation Agency (DSCA) said the missiles were meant to “defend the Kingdom of Saudi Arabia’s borders against persistent Houthi cross-border unmanned aerial system and ballistic missile attacks”. 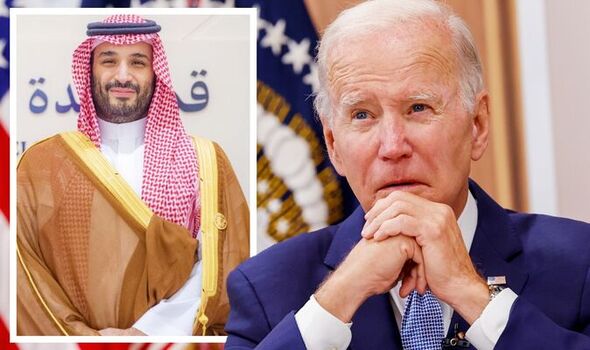 Joe Biden has struck a verbal deal that could be worth up to $5bn to the US (Image: Getty)

Joe Biden was criticized for visiting Bin Salman after vowing to turn Saudi into a “Pariah State” (Image: Getty)

The second deal will be with the United Arab Emirates (UAE) and will also include an aerial defence system.

According to the DSCA, Abu Dhabi has asked to purchase THAAD missiles and related equipment, worth about $2.2bn (£1.8bn).

The principal contractor for the THAADs is Lockheed Martin.

The move also comes as regional actor Israel seeks to build ties with West Asian and Persian Gulf nations including the UAE and Bahrain who have so far both normalised ties with Tel Aviv.

Saudi Arabia has yet to formally declare ties, yet the recent visit by Mr Biden to Riyadh saw Saudi airspace opened to traffic from Israel for the first time, in a step widely argued to be the litmus test for future ties.

Both Saudi Arabia and the UAE have raised concerns about the influence of Iran in the region, in particular the Saudis who accuse Iran of arming the Ansar Allah group, also known as the Houthis.

The rebels have in the past been alleged responsible for an attack on the Saudi-owned Aramco oil refinery in the country, which although it did not cause significant damage, did result in huge consequences to Saudi oil supplies.

This year, the Houthi group were also accused by the UAE of a missile attack on Abu Dhabi in which a volley of missile and drone attacks on the UAE capital Abu Dhabi shook the Gulf and rattled local markets in January.

Speaking of the deal with the UAE, the State Department said: “The sale would support the foreign policy and national security of the United States by helping to improve the security of an important regional partner.

“The UAE is a vital US partner for political stability and economic progress in the Middle East.”

Speaking exclusively to Express.co.uk, Dr Samuel Perlo-Freeman, Research Coordinator at Campaign Against Arms Trade said: “The deal although not yet complete will be put to congress and likely be approved.

“However, the deal has gone against President Biden’s initial promise to make Saudi Arabia a pariah state following the murder of Jamal Khashoggi.”

The UK joins the US as a major supplier of arms to Saudi Arabia.

According to the anti-war group Campaign Against Arms Trade (CAAT), the UK has sold an estimated £23.4bn worth of arms to Saudi, although officially published values of the figures place the total at £7.1bn.

The licence figures also do not include the value of ongoing maintenance, repair, overhaul, and technical and logistic support services that BAE Systems provides to the Royal Saudi Air Force in Saudi Arabia, supporting the BAE-supplied Tornado and Typhoon aircraft.

In total, according to BAE’s annual reports, the company received £20bn in revenues from the Kingdom of Saudi Arabia Ministry of Defence and Aviation between 2015-2021.

Diplomatic ties between Iran and Saudi are being attempted to be restored (Image: Getty)

According to Bruce Riedel, a senior fellow at the Brookings Institute, “The Royal Saudi Air Force (RSAF) is entirely dependent on American and British support for its air fleet of F15 fighter jets, Apache helicopters, and Tornado aircraft.

“If either Washington or London halts the flow of logistics, the RSAF will be grounded.”

Iran and Saudi Arabia are currently in the process of attempting to rekindle diplomatic ties between the two nations following a period of diminished relations.

Iraq and France have expressed their support for the talks in Baghdad between representatives from Iran and Saudi Arabia as part of a diplomatic process aimed at mending relations, calling for its continuation in order to ensure security and stability in the Middle East.