Prince Harry slammed for ‘developing his own truth’ by Levin

Prince Harry’s book could be “bitter and angry” an expert has claimed, who warned for the Royal Family it is the “publishing equivalent of a grenade being thrown into Buckingham Palace”. The Duke of Sussex’s hotly anticipated memoir, titled Spare, will finally be released to the world on January 10. Publisher Penguin Random House said the book will detail with “raw unflinching honesty” his journey from “trauma to healing”, adding: “For Harry, this is his story at last”.

The cover shows the Duke of Sussex looking directly into the camera, along with the words “Prince Harry” and “Spare”. The title is a reference to the phrase “the heir and the spare”.

But there are fears the book may contain attacks and allegations against the Royal Family – triggered by the bombshell interview from Harry and his wife Meghan with chat show queen Oprah Winfrey in March 2021.

Nile Gardiner, a Royal Family enthusiast and foreign policy expert, fears the memoir from the Duke of Sussex “could cause a great deal of damage to the Royal Family”.

In a huge warning, he compared the book to the “publishing equivalent of a grenade being thrown into Buckingham Palace”. 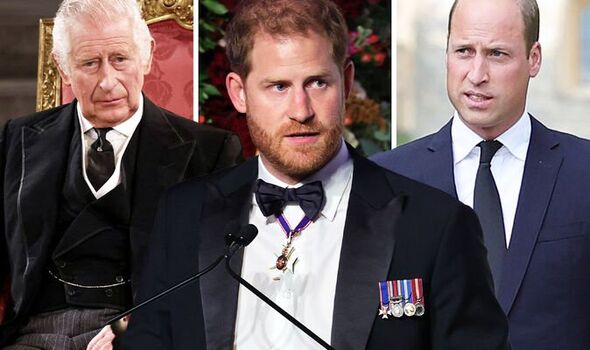 Prince Harry’s upcoming book could be ‘bitter and angry’ an expert has warned (Image: GETTY)

Prince Harry has been warned attacks on the Royal Family in his book will have a damaging impact (Image: GETTY)

He told Express.co.uk: “There has rightfully been a lot of reaction to the release, and I anticipate this is going to be an angry and bitter book. It is one that could cause a great deal of damage to the Royal Family.

“The tone of book, based on the title Spare and the front cover, looks to be very dark. It may well be the publishing equivalent of a grenade being thrown into Buckingham Palace.”

Mr Gardiner added: “The title of the book sets a resentful tone from the start. It will likely not be a book that will be full of hope and aspiration.

“It could be a book filled with a lot of rage and the title is a reflection of that anger. The book’s title alone sends a massive negative signal.”

READ MORE: Meghan and Harry warn Royal Family ‘we can do without you’ on website

The Royal Family enthusiast warned there will be “a lot of nervousness” within Buckingham Palace around the release of the book and its contents.

But he warned any attacks against the royals could be “very damaging” for the monarchy and have a “catastrophic” impact on Harry and Meghan’s standing in the Royal Family to the point where they could lose their royal titles.

Mr Gardiner continued: “Buckingham Palace will be very concerned about the book and there will be a lot of nervousness around its upcoming release. I anticipate it is going to be a massive bridge burner with the Royal Family. The long-term consequences for the monarchy are very damaging.

“The impact on Harry and Meghan’s standing in the Royal Family will be catastrophic. They will lose their royal titles if there are attacks in this book.”

The Dukle and Duchess of Sussex have been warned they could lose their royal titles (Image: GETTY)

In March 2021, the Duke and Duchess of Sussex sat down for a bombshell interview with Oprah Winfrey – some 12 months after they relinquished their roles as working members of the Royal Family when they moved to the US.

During the interview, the couple alleged there had been “several conversations” within the Royal Family about the skin tone of their soon-to-be-born baby, Archie.

Prince William quickly leapt to the defence of the monarchy, and later stressed: “We are very much not a racist family.”

During the interview with Oprah, the couple also accused the Royal Family of ignored Meghan’s cries for mental health support and had left her feeling suicidal.

Buckingham Palace issued a rare public statement, which said the claims were “concerning” and would be “addressed by the family privately”.

In a press release for Harry’s book, publisher Penguin Random House said: “Spare takes readers immediately back to one of the most searing images of the 20th century: two young boys, two princes, walking behind their mother’s coffin as the world watched in sorrow – and horror.

“As Diana, Princess of Wales, was laid to rest, billions wondered what the princes must be thinking and feeling – and how their lives would play out from that point on. For Harry, this is his story at last.

“With its raw, unflinching honesty, Spare is a landmark publication full of insight, revelation, self-examination, and hard-won wisdom about the eternal power of love over grief.”

A promotional website for the new book has also gone live, with Penguin saying the Duke of Sussex will be supporting British charities with donations from the proceeds, including Sentebale and WellChild.

When Prince Harry announced details of the book last year, he said in a statement: “I’m writing this not as the prince I was born but as the man I have become.

“I’ve worn many hats over the years, both literally and figuratively, and my hope is that in telling my story – the highs and lows, the mistakes, the lessons learned – I can help show that no matter where we come from, we have more in common than we think.

“I’m deeply grateful for the opportunity to share what I’ve learned over the course of my life so far and excited for people to read a first-hand account of my life that’s accurate and wholly truthful.”

Video shows cycling doctor, 58, mown down by accountant before he 'stabs him to death'