Black holes are regions of spacetime so deformed by concentrated mass that nothing — not even light — can escape their gravity. They can be formed when the centre of a very massive star collapses in on itself, the same event which also blasts part of the star out into space in a supernova explosion. Given this, astronomers believe that there should be hundreds of millions of black holes scattered throughout the Milky Way alone. However, black holes can usually only be detected thanks to the radiation released as gas and dust swirl towards them — meaning that isolated black holes are essentially invisible.

In their study, astronomers Casey Lam and Professor Jessica Lu of the University of California, Berkeley and their colleagues report detecting what may be an isolated black hole thanks to a phenomenon known as “gravitational microlensing”.

This is the name given to the distortion of the light from a distant star by an object with a strong gravitational field — making the star appear brighter than it should have been.

The researchers are not completely sure the object in question is indeed a black hole, as its mass has been estimated at between 1.6–4.4 times that of the Sun.

In order to collapse into a black hole, they explained, a dying star is thought to need to be at least 2.2 times as heavy as the Sun. 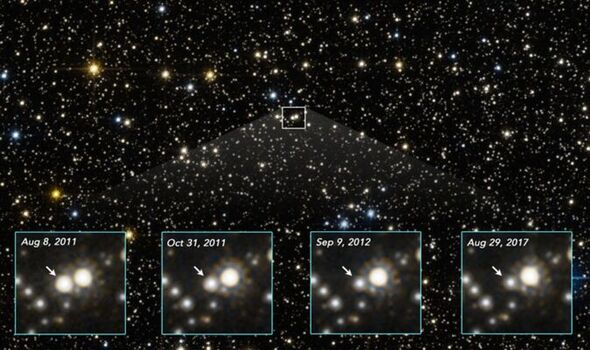 The alternative hypothesis is that the object is a neutron star. These form when medium-sized stars collapse in on themselves, crushing every proton and electron within into neutrons.

While these bodies are very dense and compact, their neutron pressure stops them from collapsing further into a black hole.

According to Ms Lu, more research is needed to confirm the object’s nature.

She added: “As much as we would like to say it is definitively a black hole, we must report all allowed solutions.

“This includes both lower mass black holes and possibly even a neutron star.”

READ MORE: Merging black holes can be ejected out of their host galaxy

Regardless of whether it is a black hole or a neutron star, the compact object is the first so-called dark stellar remnant — a “stellar ghost”, as the team put it — to be discovered wandering through the galaxy unpaired with another star.

“With microlensing, we’re able to probe these lonely, compact objects and weigh them.

“I think we have opened a new window onto these dark objects, which can’t be seen any other way.”

A Hubble Space Telescope image of the star that was brightened and distorted by a ‘stellar ghost’ (Image: STScI / NASA / ESA)

Determining how many of these “stellar ghosts” populate the Milky Way, the team explained, will help astronomers better understand what happens to stars at the end of their lives.

Such studies may also reveal so-called primordial black holes, hypothetical objects produced in the wake of the Big Bang as a result of density fluctuations in the early Universe.

The present analysis, the researchers explained, also identified four other microlensing events, but the team concluded that none were the result of a black hole — with the team saying that two of them are likely either the result of a neutron or a dwarf star.

The team have also predicted that the total count of black holes in our galaxy is around 200 million — an estimate in line with most previous theoretical predictions.

DON’T MISS:
Energy crisis horror as households fork out more than £500m [REPORT]
Have some of that! UK missiles force Russia to retreat 100km [INSIGHT]
Octopus Energy steps in to save Germany from Russia clutches [ANALYSIS]

A second team led by astronomer Dr Kailash Sahu of the Space Telescope Science Institute (STScI) in Baltimore also studies the same microlensing event as Ms Lu and her colleagues.

Dr Sahu and colleagues have come to a slightly different conclusion, claiming that the mass of the object is closer to 7.1 solar masses, which would definitely make it a black hole.

Both research teams also estimated the velocity of the compact object.

Dr Sahu and colleagues believe it to be travelling at the unusually high speed of 100,800 miles per hour — the result of getting an extra kick, they said, from the supernovae that generated it.

In contrast, Ms Lu and her team have the more sedate estimation of fewer than 66,960 miles per hour, which they have interpreted as supporting a new theory that black holes may form “from failed supernovas that don’t make a bright splash in the universe or give the resulting black hole a kick.”

Both teams used photometric measurements of the distant star’s brightening from the Optical Gravitational Lensing Experiment (OGLE) in Chile and the Microlensing Observations in Astrophysics experiment in New Zealand.

Astrometric measurements of the star’s apparent movement as a result of the black hole’s gravity were collected by NASA’s Hubble Space Telescope.

A preprint of Lu et al.’s article, which has been accepted for publication in The Astrophysical Journal Letters but has not yet been peer-reviewed, can be read on the arXiv repository.

The second paper, by Sahu et al., has also been accepted for publication in The Astrophysical Journal Letters. A preprint, which has also not been peer-reviewed, can be read on the STScI website.