Last-ditch talks to avoid strike action today broke up without agreement yesterday. Mr Johnson said: “Now is the time to come to a sensible compromise for the good of the British people and the rail workforce. “Too high demands on pay will also make it incredibly difficult to bring to an end the current challenges facing families around the world with rising costs of living.”

Leaders of the Rail, Maritime and Transport Union have threatened passengers with months of chaos in the dispute over pay and working conditions.

Urging them to rethink, Mr Johnson said: “The unions are harming the very people they claim to be helping.

“By going ahead with these rail strikes, they are driving away commuters who ultimately support the jobs of rail workers, while also impacting businesses and communities across the country.”

He added: “I want to be clear – we are not loading higher fares on passengers to carry on paying for working practices that date back in some cases to the 19th century.”

Mr Johnson, Chancellor Rishi Sunak and other senior ministers will hold emergency talks about the strike chaos at the weekly Cabinet meeting in Downing Street this morning.

They will also discuss the Government’s latest plans for tackling the cost-of-living surge.

Ahead of the meeting, the Prime Minister signalled that public-sector pay increases will have to be curbed to help bring inflation, forecast to hit an eye-watering 11 percent this year, back under control. 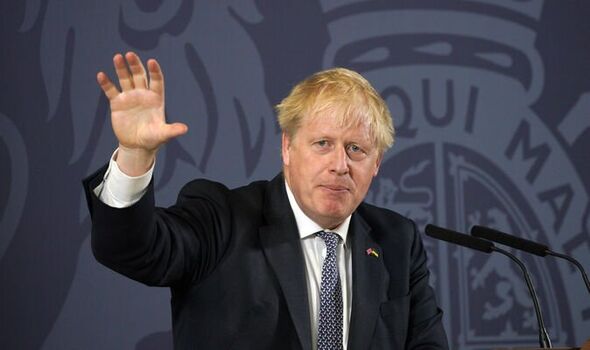 He said: “It is right that we reward our hard-working public sector workers with a pay rise, but this needs to be proportionate and balanced.

“Sustained higher levels of inflation would have a far bigger impact on people’s pay packets in the long run, destroying savings and extending the difficulties we’re facing for longer.”

Thousands of RMT members at Network Rail and 13 train operators are expected to strike today, Thursday and Saturday. Services will continue to be severely disrupted on the days following the action.

Hospitality chiefs estimated the walkout will cost the tourism, leisure and theatre industries around £1billion.

Millions of commuters will be affected for at least six days by rail disruption as a result of the strikes and, in many cases, will have no option but to work from home.

Talks to try to avert the walkout continued into yesterday afternoon but broke up, with the RMT rejecting a wage rise of up to three percent.

London Underground workers are also due to strike today.

Mick Lynch, RMT general secretary, blamed the “dead hand of this Tory Government” for the strike and predicted the disruption will continue for months.

He said: “Our campaign will run as long as it needs to run until we get a settlement acceptable to our people.

“Whenever we get an offer that is tenable we will put that to our members in a referendum.”

Asked if the strike could last for months if a deal is not reached, Mr Lynch replied: “I think it will, yes.

“I think there is going to be a wave of industrial action, a wave of ballots and a wave of campaigning.”

Mr Lynch condemned the employers’ latest offer as “more of a whimper than a bang”.

The RMT leader said: “The pay proposals are a two percent down payment with the possibility of one percent more. But we have to accept their full agenda of job cuts, changes to working practices, and, of course, we have to accept that we have not had a pay rise for our members in three years.

“And this is more of a whimper than a bang – there’s nothing in this that we can compromise on.

“And I don’t think any trade union in the country could accept what is on the table today.

“What we have come to understand is that the dead hand of this Tory Government is all over this dispute and the fingerprints of Grant Shapps and the DNA of Rishi Sunak are all over the problems on the railway, and indeed the problems in this society.”

Passengers flood Waterloo on the first day of the strike (Image: Getty)

He said: “We’re asking passengers to plan ahead and only travel by train if necessary.

“We continue to talk to the RMT and urge them to work with us to find a solution that works for rail workers and taxpayers, and avoids causing further disruption for our passengers.”

Transport Secretary Grant Shapps said the strike was “orchestrated by some of the best-paid union barons representing some of the better-paid workers in this country, which will cause misery and chaos to millions of commuters”.

Mr Shapps added: “It’s actually callous, that’s what it is. I have a daughter who is taking an exam on Thursday. Thursday’s a strike day. I can see the stress is already building on her because she’s now worried about getting there.”

This week’s rail strikes are bad for everyone. Passengers who cannot get to work will lose income during an ecoconmic crisis. Leisure travellers will be put off using rail, just when we need them most as customers.

Supply chains will be hit by freight delays, leading to shortages for factories and shops. Rail staff risk an industry decline, which costs jobs. And the taxpayer picks up the bill.

The unions’ demands will no doubt grate on passengers who were on furlough during the pandemic and are paid less than many rail staff, or have received no pay increase.

Rail firms need to cut costs so fares do not have to go up next year by the expected 11 percent inflation rate. They must also make services more reliable.

Rail can make a major contribution to transport decarbonisation, particularly by taking freight off the roads.

But the Government will not invest in an industry that costs too much and cannot be relied upon to deliver a good service.

There do not appear to have been any major negotiations yet and it seems the Government is hiding behind the rail firms, expecting them to do the work.

But train operators’ hands are tied by contracts which require Government approval for any significant expenditure – and Network Rail is nationalised.

The Government can afford to play hardball because, since Covid, many more people can work from home and season ticket numbers have fallen.

The Treasury will be seeking a settlement in line with other public sector pay awards and they will want it to be paid for by more flexible working.

Failure to negotiate now will lead to further reductions in service frequency, creating a vicious spiral of decline.

• Chris Page is chair of Railfuture

School could be crippled by chaos if teachers strike.

Britain’s largest union put out the warning as it indicated a total of three-quarters of staff could walk out.

The National Education Union (NEU) is looking to ballot members over industrial action during the autumn term unless an inflation-matching pay rise is placed on the table.

The National Association of Schoolmasters/Union of Women Teachers has warned it do the same if staff are not offered a 12 percent pay rise.

Most school workers are represented by these two unions – and their chiefs say teachers’ pay has fallen by a fifth in real terms since 2010.