Taking to the podium outside No 10 for the last time, Boris Johnson said it “pained” him not to get the chance to stay on in the top job. After months of pressure and an intense 24 hours, he finally caved in and agreed to resign. He said he tried to persuade his colleagues it would be “eccentric” to change leader at this time, blaming the “herd instinct” in politics for his departure.

Mr Johnson added that he would stay in office until the next leader and Prime Minister was found, a process that is already underway, and that a timetable for a leadership contest would be released next week.

While the UK races to digest the day’s events, in Europe, reports suggest that at least some of the EU, as the BBC’s Katya Adler put it, “[is] rubbing its hands with glee”.

Mr Johnson has a long and complicated relationship with Brussels.

Once an ardent Europhile, in 2016 he switched allegiances and has not looked back since. 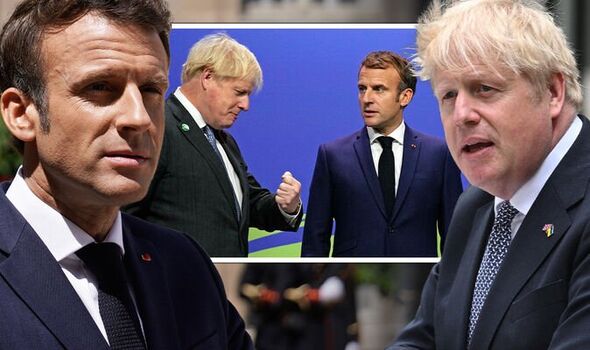 Resignation: Johnson stepped back from his role as PM on Thursday (Image: GETTY)

What resulted was a string of tense clashes with EU leaders as he peeled the UK off the bloc, none more so than with France’s President Emmanuel Macon.

The pair, their countries so close yet so far off in terms of policy, clashed over things like fishing rights, the English Channel, immigration as well as the use of the French language.

The UK and France were tangled in a deadlock over how to handle a number of migrant crossings of the English Channel late last year.

In November, the deaths of 27 people sparked widespread criticism of both London and Paris, with many accusing each leader of not taking the crisis seriously.

Things heated up when Mr Johnson shared a letter intended for Mr Macron on Twitter that set out five steps which he said could help avoid another tragedy.

At a press conference days later, Mr Macron voiced his fury at the letter being made public, saying: “I spoke two days ago with Prime Minister Johnson in a serious way.

“For my part I continue to do that, as I do with all countries and all leaders. I am surprised by methods when they are not serious.

“We do not communicate from one leader to another on these issues by tweets and letters that we make public. We are not whistleblowers.”

A French government spokesperson then said Mr Johnson was telling the public one thing and officials another.

They added: “We are sick of double-speak.”

Just before the English Channel debacle, Mr Johnson and Mr Macron were at loggerheads over the open stretch of water, this time regarding fishing licenses.

After the UK left the EU, new fishing zones were drawn up, with some EU nations told they could continue fishing UK waters for a certain period.

Again, France and the UK clashed, this time over the number of licenses issued to French boats.

Mr Macron alleged that the UK was withholding permits for French boats to fish in British waters, and demanded that more be approved.

At the time, UK data suggested Britain had granted around 96 percent of fishing licenses requested by French boats up until that point.

France warned and threatened the UK that it would impose economic sanctions if the issue was not rectified.

The episode was soon smoothed out, with more French fishermen eventually being granted licenses.

Cornwall: The leaders pictured at the 2021 G7 summit in Cornwall (Image: GETTY)

Fishing row: At one point France refused a British ship to leave its docks (Image: GETTY)

In September 2021, Britain came to an agreement with the US and Australia and signed a trilateral security pact.

Under the pact — known as Aukus — the UK will now help Australia to build and acquire nuclear-powered submarines in light of heightening tensions in the Indo-Pacific region, specifically the South China Sea.

However, Australia already had an existing contract with France to build such submarines.

At the time, Mr Johnson was on a visit to the US, and told reporters he was “not trying to shoulder anybody out”.

Aukus: Tensions in the South China Sea led to the Aukus pact, much to Macron’s anger (Image: GETTY)

He said he and the other leaders had been a “bit taken aback by the strength of the French reaction”.

Mr Johnson then told Mr Macron to “donnez-moi un break” — “give me a break”.

While received as a throwaway phrase by many, others claimed it was a sign of disrespect from Mr Johnson and a goading way to address the French President.

Mujtaba Rahman, managing director at the Eurasia Group, argued in a string of tweets: “Yes, Macron has responded petulantly at times. But there is no – repeat NO – special political gain to a French leader in bashing Britain. It is tabloid gold the other way around, as Johnson knew.”

‘Le bromance’ Is what Johnson used to described their rekindled relationship (Image: GETTY)

Newspapers across the board said it was a sign of a “deepening rift” between France and the UK.

Despite all this, last month, Anglo-French relations appeared to be revitalised after Mr Macron and Mr Johnson agreed to hold a new bilateral summit “sooner rather than later” — something which will no longer be realised.

Regardless, it marked a shift in communications, with The Times reporting that Mr Johnson jokingly referred to their relationship as “le bromance” and added that they were “100 percent aligned” on Ukraine at the recent G7 summit in Germany.