More than 100 Tory MPs could turn against Boris Johnson if he faces a confidence vote, according to reports. The Prime Minister would still comfortably win the ballot of 360 Conservative MPs as he requires a majority of just one to survive, but such a rebellion would severely damage his leadership credentials. Mr Johnson is facing yet another difficult week after reshuffling his Downing Street top brass amid a series of resignations and mounting pressure over Partygate, the cost of living crisis and his failure to apologise for his comments about Jimmy Savile.

According to iNews, the threshold of 54 letters needed to trigger a confidence vote is approaching.

The newspaper claimed between 30 and 45 MPs have written to Sir Graham Brady, chairman of the 1922 committee, though only 15 have publicly declared they have done so.

Several Tory backbenchers are reportedly holding their letters of no confidence back until there is a “clear tipping point” — the publication of the full Sue Gray report, fresh Partygate revelations or a separate leak to do with sleaze of party finances.

If he wins a confidence vote, he would be safe from further challenges to his leadership for a year.

READ MORE: Blackford attempts to dodge question on lies – then admits he has 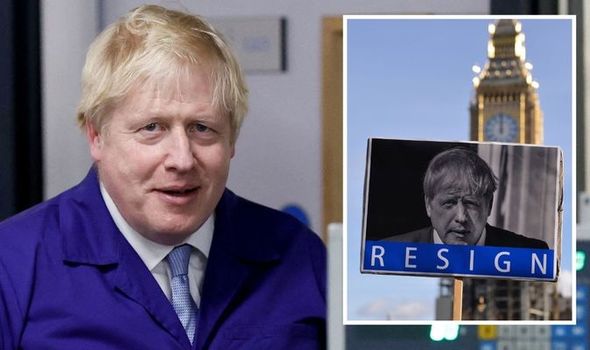 Dominic Cummings, former chief advisor at Number 10, wrote last year that Mr Johnson has a “clear plan” for how his premiership will end.

Writing in July 2021, Mr Cummings said: “Unlike other PMs, this one has a clear plan to leave at the latest a couple of years after the next election, he wants to make money and have fun not ‘go on and on’.

“So we either live with chronic dysfunction for another ~5 years or some force intervenes.”

Just two years after the biggest Tory majority since Margaret Thatcher’s 1987 victory, the Prime Minister is facing the most perilous moments of his time in Downing Street.

He has previously faced calls to quit after a scandal-hit 2021, but pressure appears to be higher than ever.

Of the 3,681 British adults surveyed, 63 percent felt he should resign. Just a quarter of respondents argued that he should remain in his role.

Senior Tories have suggested a resignation is unlikely. (Image: GETTY)

Just over half of Conservative voters continued to back him, with 51 percent thinking he should remain in Downing Street. But two in five Tory voters still think he should resign.

Meanwhile, Business Secretary Kwasi Kwarteng has called on Tory MPs to allow the Prime Minister the “time and space to deliver”.

Mr Kwarteng was asked whether Mr Johnson had lost the support of his party during an appearance on the BBC’s Sunday Politics yesterday.

He said: “I don’t think so at all. I have been an MP for 12 years. In all that time, leadership issues have bubbled to the surface.

“A few people have said they are not happy with the direction and gave their views publicly. [But] on balance, if you look at the party in the round, I think people are just very, very focused on delivering on the manifesto.

“He has got a clear mandate and we have got to give him time and space to deliver on that mandate.”

Other leading figures, however, have argued that there is a “strong case for change”.

Lord Barwell, a former Tory MP who served as Theresa May’s chief of staff from 2017 until 2019, told Sky News yesterday: “My inclination is that the Conservative Party would be better making a change and I also think, for the good of the country in terms of trust and faith in our politics, there’s a strong case for change.

“But it’s not up to me to make a decision. Ultimately, this is a decision that, up until the next election at least, is one for Conservative MPs.”

Asked if Mr Johnson would willingly leave office, he said: “I don’t think there’s a chance in hell that the Prime Minister is going to voluntarily resign.”

The Prime Minister telephoned some of his colleagues over the weekend to persuade them of the significance of the changes being implemented at Downing Street, according to the BBC.

Among the new appointments is Guto Harri, a former aide of Mr Johnson who has started as director of communications.

He was asked by reporters what his first task of the day would be upon arriving at Number 10 this morning, he said he would “give healthy snacks and mineral waters to staff” while waving a shopping bag to the cameras.