Did a TICK BITE save Jude’s life? Boy, 3, turns out to have rare brain cancer but doctors only found it when his mother asked for an MRI scan following brush with spider-like creature that left him ‘screaming in pain’

A bite from a tick may have helped save a three-year-old boy’s life after scans to explore mysterious symptoms spotted a rare form of childhood cancer.

Jude Mellon-Jameson from Sheffield was your average three-year-old, a massive fan of dinosaurs and other animals and excited to learn about how things work. 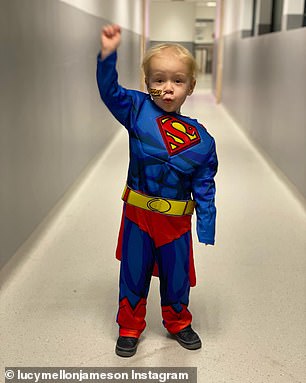 However, following a tick bite in the summer of 2021, Jude began to complain about pains in his legs and struggled to walk, and also had spiking temperatures and night sweats.

His mother Lucy recalled:  ‘He would wake up in the middle of the night screaming in pain.’

Several trips to A&E and numerous tests were carried out but no answers were found.

Eventually the family were asked if they wanted Jude to have an MRI scan to which they said yes.

But the origin of Jude’s symptoms was discovered to not be any form of tick related disease but instead a tumour caused by a rare from of childhood cancer called neuroblastoma.

At one point the family were given the heart breaking news that young Jude might only have a 50 per cent chance of making it to his eight birthday.

Ms Mellon-Jameson said: ‘Long-term survival when you are three should not be looking at when you are eight years old,’ she said.

Neuroblastoma is type of cancer which develops from nerve cells left behind from a baby’s development in the womb. 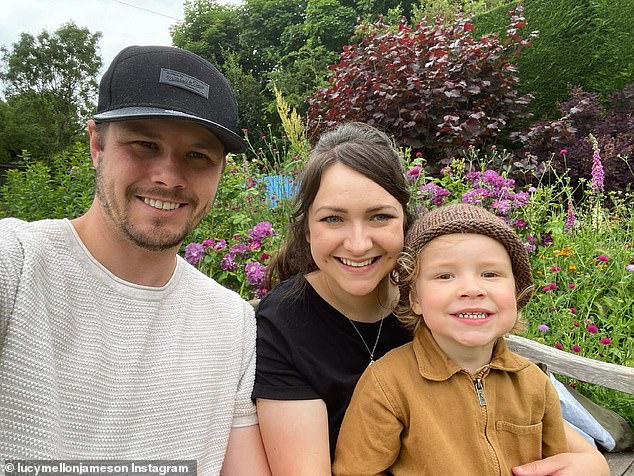 Three-year-old Jude with his mum Lucy and dad Arron 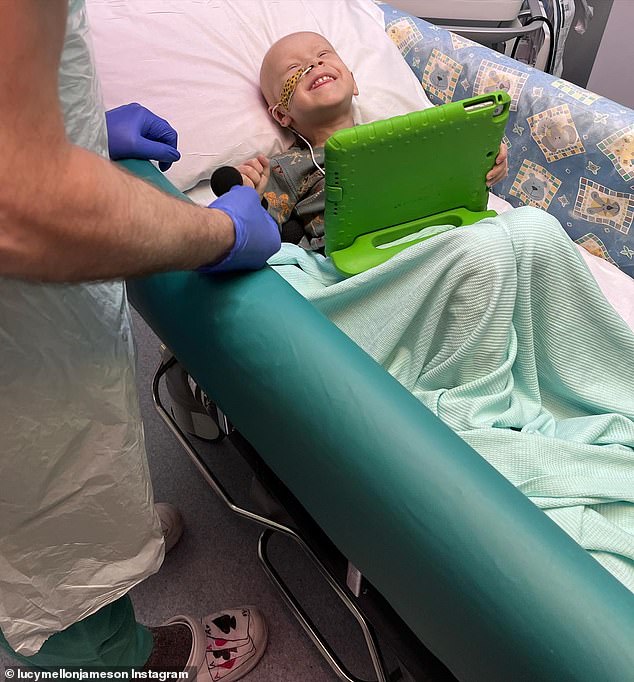 Tumours caused by the cancer are most common on the adrenal glands of the kidney and the spinal cord but it can spread to other organs.

About 100 children are diagnosed with neuroblastoma each year in the UK with the figure eight times as many in the US.

Survival rates depend on how early it is detected, the age of the child, and if it has spread to other tissues, but about seven in 10 children who get neuroblastoma survive for five years or more.

Jude is currently responding well to his treatment, which has involved multiple rounds of chemotherapy and surgery to remove his primary tumour.

But his family live in fear of a relapse, which would see his chances of survival plummet to 5 per cent.

‘He is pretty much cancer-free at the moment, but the diagnosis is still high-risk, which comes with the high risk of it coming back,’ Ms Mellon-Jameson said.

Desperate to give him the best chance possible, his family are hoping to raise the hundreds of thousands of pounds needed for experimental cancer treatment in America.

A number of British children have travelled to the US in recent years to get a vaccine against neuroblastoma which has not been approved for use by the NHS.

British families have often needed in excess of £200,000 to afford the treatment and travel needed.

Ms Mellon-Jameson and Jude’s dad Arron want to give him the best chance of not having to go through cancer treatment again.

‘Chemotherapy is not designed for children of his age, so it is really tough on their bodies. It has left him with hearing loss, and he is almost certainly infertile,’ she said.

‘Having to think those things about a three-year-old child is harrowing to start with, and so the thought of, if it comes back, could we have done more, would play on mind all the time.’

People can donate to Jude’s fundraiser via Solving Kid’s Cancer.

Neuroblastoma is a rare cancer that affects children and usually starts in the abdomen.

Around 100 children, who are typically under five, are diagnosed every year in the UK.

The disease affects approximately 800 new children annually in the US.

In around half of cases, neuroblastoma spreads to other parts of the body, particularly the liver and skin.

Neuroblastoma’s cause is unclear. There may be a family-history link.

The main symptom is usually a lump in the abdomen, which may cause swelling, discomfort or pain.

If the disease affects the spinal cord, it can lead to numbness, weakness and loss of movement in the lower part of the body.

Treatment depends on how advanced the cancer is and the risk it will return after therapy.

Surgery, and chemo and radiotherapy, are commonly used.