Oil giants braced for £24bn Russian hit: But campaigners say BP and Shell are still cashing in on cost of living crisis as profits surge

Energy giants BP and Shell are preparing to stomach the mammoth cost of severing ties with Russia, which threatens to overshadow bumper profits they have raked in from the surging price of oil and gas.

Campaigners have blasted the FTSE100 firms for making huge profits as households battle a cost-of-living crisis. Trading profits are expected to show they made as much as £120million a day in the first quarter.

But the combined cost of exiting their Russian partnerships is likely to be booked early next month. The total impact will reach as much as £24billion as they digest the impact of Russia’s invasion of Ukraine. BP is expected to write down up to £20billion for ditching its near-20 per cent stake in Kremlin-owned oil firm Rosneft. The eye-watering sum will be included in BP’s update to the market in the first week of May as a ‘material charge’. 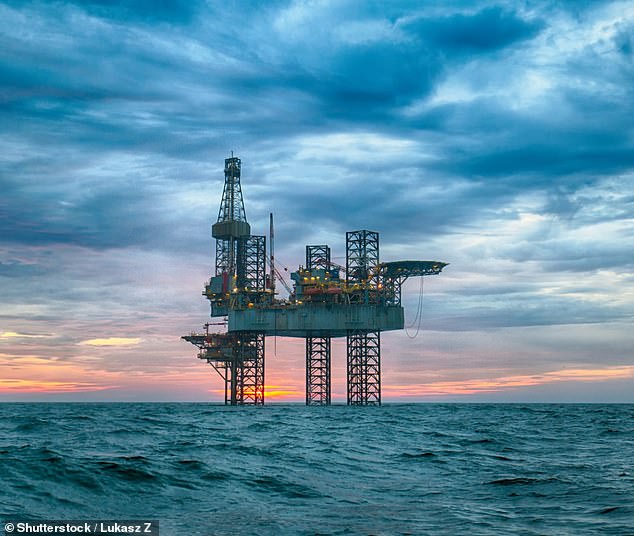 Gathering storm: BP and Shell’s combined cost of exiting their Russian partnerships is likely to be booked early next month

Rival Shell could also book impairment charges of up to £3.5billion. It has said it will exit its joint venture with Gazprom, Russia’s state gas giant, including its stake in the Sakhalin-2 gas project. The costs of ditching the partnerships will be reported as exceptional ‘paper losses’.

That means it will hamper headline profits, although it is unlikely to impact the ability to continue paying dividends to shareholders.

But it could distract from both companies’ profit bonanzas – which they have reaped from runaway oil and gas prices.

BP will unveil its figures on May 3, while Shell will report the same week on May 5. But the boom in underlying trading profits is bound to anger ordinary Britons struggling with rocketing fuel bills. It will also renew pressure on the Government to introduce a one-off windfall tax on North Sea oil producers to help households battle with spiralling prices.

MPs representing Labour and the Lib Dems – plus some Tories – have joined campaigners urging Ministers to bring in a windfall tax. These calls intensified in February after BP and Shell reported combined profits of £25billion for 2021.

They later revealed huge pay packets for their bosses. BP chief executive Bernard Looney previously described his company as a ‘cash machine’ when a rebound from the pandemic turbocharged its earnings.

Business Secretary Kwasi Kwarteng has so far dismissed the demands for a one-off levy.

The cap on average home dual-fuel tariffs was increased by more than half to £1,971 earlier this month and the invasion of Ukraine triggered another spike in wholesale gas prices – which are around 275 per cent higher than at this time last year.

Energy chiefs have warned 40 per cent of Britons could fall into fuel poverty this winter. Businesses are also struggling to keep up with their bills. Simon Cran-McGreehin, head of analysis at the Energy and Climate Intelligence Unit, said: ‘I’m sure when BP and Shell’s profits come out there will be some very justified anger about this. From our polling, the public’s perception is that oil and gas producers are profiting from this crisis.’

Tax Justice UK Executive Director, Robert Palmer, said: ‘Despite the hit from Russia, these companies should not be let off the hook.’ He said: ‘The extraordinary profits being raked in by these energy giants shows this isn’t a cost of living crisis, it’s a cost of living scandal.’

The war in Ukraine also led to another oil rally as supplies from Russia, which is one of the world’s top exporters, were disrupted by sanctions.

Brent crude surged as high as $130 a barrel last month, the highest since July 2008. It is a sharp reversal from the nosedive to $19 a barrel in April 2020, when lockdowns sent demand tumbling as travel and industry worldwide were brought to a standstill.

The jumps in the oil price – which now stands at $107 – have sent petrol prices to new records. Unleaded petrol is on average 162p per litre and diesel at 176p at the pump.

In a note, RBC brokers said: ‘The energy sector continues to be well-placed to benefit from the current environment, and we believe recent geopolitical events have put a renewed focus on core oil and gas businesses.’

Analysts at RBC estimate BP will unveil first-quarter profit of £4billion at its results on May 3. The bank believes Shell will report a £6.7billion profit on May 5.

According to Refinitiv, analysts also expect both oil giants to hike their dividends this year.

What will stamp duty changes mean for your house-moving plans?