Suella Braverman has vowed to take “dramatic action” to stem the flow of migrants across the English Channel after 30,000 arrivals so far this year. And the Home Secretary also lambasted European judges for intervening to block the first flight to take people to Rwanda in accordance with a deal aimed at deterring further crossings – while suggesting the Modern Slavery Act 2015 was being abused by “paedophiles, convicted drug dealers and convicted murderers”.

Ms Braverman, speaking to The Sun prior to the start of the Conservative Party conference, did not hold back in the midst of a year which has seen ten times the number of people crossing the waterway as did in the whole of 2018, often using flimsy dinghies to do so.

The Ministry of Defence (MoD) recorded 499 people making the journey on Thursday in 10 boats, taking the provisional total for 2022 to date to 32,807. In September alone, 7,767 people have made the crossing.

Former Attorney General Ms Braverman said: “There’s a crisis on the Channel and it’s been going on for far too long.

“There have been huge attempts to try and stop the problem and I feel that we are at a stage now where we need to take dramatic action.

“So the problem has gone out of control for a variety of reasons.” 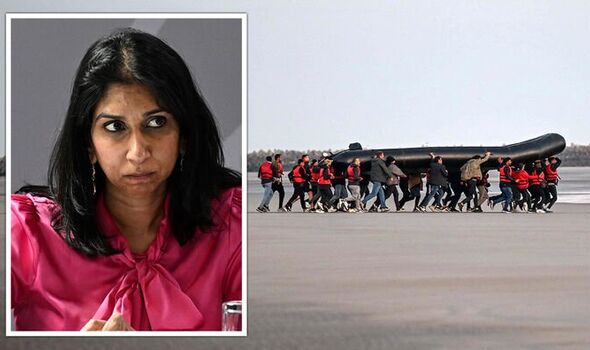 Ms Braverman also claimed crooks were taking advantage of loopholes to stay in the UK.

She explained: “Unfortunately, it’s a really low bar that you have to cross to be considered to be a victim of modern slavery, that is what is gumming up the system at the moment.

“And what’s even worse about modern slavery, and the way it’s being applied at the moment, is that we’re getting some egregious cases, which make my blood boil in terms of how it’s being abused.

“We are getting instances where convicted paedophiles, convicted drug dealers, convicted murderers, who served their sentences in English jails — at the end of their sentence, we want to deport them because they are considered to be foreign national offenders. “What do they do? They claim modern slavery.”

Referring to the fallout associated with the Rwanda deal struck by predecessor Priti Patel, she also suggested the UK could out of the European Convention on Human Rights or introduce new British Bill of Rights excluding foreign judges from UK cases.

She said: “It was thwarted because, frankly, of an interventionist politicised court in Strasbourg.

“And a decision taken where there was no UK representation, behind closed doors, and in a very mysterious way, frankly.

“We really need to review and look at our relationship with Strasbourg.”

Migrants are escorted ashore at Dover in August (Image: GETTY)

Migrants rescued off the Kent coast at Dungeness (Image: GETTY)

Nevertheless, she insisted the UK remained committed to the plans, and was looking to strike similar deals with other countries, including Albania.

A former resident of France who speaks the language fluently, Ms Braverman also hinted that she was keen to work with French President Emmanuel Macron and his Government to thrash out a long-term solution.

Revealing plans to visit the country soon, she said: “We do have a common and shared mission.”

In an exclusive op-ed written for today’s Sunday Express, Prime Minister Liz Truss said: “We are taking decisive action to take on the vile people traffickers sending small boats across the English Channel by beefing up our Border Force and expanding the Rwanda scheme.

“Our party will ensure no European judge can frustrate our work to keep Britain’s borders secure.”

Last November, 27 people, including five women and a female child, died in the Channel near Calais while trying to cross the Channel, France’s interior minister Gerald Darmanin confirmed.

Two people were rescued from the water and four suspected people-smugglers subsequently arrested, he added.

The incident was the worst ever loss of life involving migrants in the Channel, French authorities said.

Then-UK Prime Minister Mr Johnson said he was “shocked, appalled and deeply saddened” and claimed human traffickers were “literally getting away with murder”.

A report published by the Refugee Council on Friday said 94 percent of 233 children it supported last year were wrongly considered to be aged over 18 by the Home Office. Only 14 were found to be adults.

The charity said it has “already had to intervene to stop children who were incorrectly assessed as adults from being detained awaiting removal to Rwanda”.

The Home Office said age assessments were “challenging but vital” and legal reforms would make the checks “more consistent and robust” by using scientific methods, despite the Council describing the plans as “flawed” and the procedures “not reliable”.

Meanwhile, 227 foreign criminals and 306 immigration offenders have been removed from the UK this month and returned to countries including Romania and Zimbabwe, the department said.