Mr Jayawardena, who entered the Department for International Trade after a short stint as the Conservative Party’s deputy chairman in 2020, spoke exclusively to Express.co.uk about the UK’s trade plan as the Government pushes ahead with measures to take advantage of Britain’s departure from the European Union. The Brexit-backing MP has been tasked with negotiating and implementing the UK’s new trade deals and touched down in Canada last month to outline plans to replace the existing EU-based accord with a new trade agreement between London and Ottawa.

Speaking about progress made in negotiations with Canada, Mr Jayawardena said: “I got a real sense of positivity about what could be done as two like-minded nations with a great shared history and I’m very hopeful we are going to achieve something quite special.”

However, he stopped short of putting a date on when Brits can expect to see an agreement signed in principle.

Jayawardena said: “We’re not going to put an end date on any negotiations, we’ve always been very clear about that.

“We will wait to get a right deal for British businesses and indeed I am sure the Canadians will say the same.”

Britain also launched talks for an “ambitious” agreement with India in January, which Brexiteers suggest could demonstrate the UK’s newfound ability to forge trading relationships with non-EU partners from scratch given there is no existing deal between London and New Delhi.

Mr Jayawardena echoed Boris Johnson’s pledge to sign a new trade deal with India by Diwali and stressed that enormous progress has already been made in the last couple of months.

JUST IN: ‘Get over it!’ Remoaners savaged by Brexiteer over ‘nonsense’ inflation claim 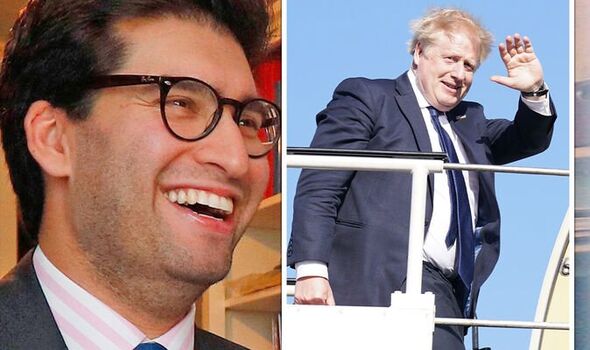 Ranil Jayawardena was appointed as an International Trade Minister in May 2020. (Image: @ranil/Twitter)

India has been seen by many as a potential jewel in the UK’s post-Brexit crown and Mr Jayawardena seemed optimistic about the potential benefits of an accord with the Commonwealth nation.

The International Trade Minister even pointed out how Scotch whisky and UK car manufacturers could be major beneficiaries of a trade deal which would build on the £8.4billion worth of total UK exports to India in 2021.

India accounted for £24.3billion of Britain’s total trade and UK trade with Canada stood at £21.4billion in 2021, according to the Office for National Statistics (ONS).

But both markets were dwarfed by UK trade with the US and EU, which totalled £215.2billion and £555.7billion respectively.

Despite representing a smaller chunk of UK trade, the Government remains optimistic about the potential benefits which accompany an agreement with India given the Commonwealth country looks set to become the world’s third largest economy by 2050.

The Government has even suggested a deal with India has the potential to boost Britain’s total trade by up to £28billion a year by 2035 and increase wages by as much as £3billion.

“We’ve actually seen the trade flows with the EU come back and February’s figures were actually showing we were coming back.”

He added: “The advantage we now have is securing new markets where we can do much more in the future to grow the economy beyond where it is today.”

Despite UK goods exports to the EU suffering an immediate £8.9billion month-to-month hit after the transition period in January 2021, Mr Jayawardena revealed they have rebounded by £23.4billion in the 12 months to the end of March 2022.

Since leaving the Brussels bloc and its customs union, the UK has signed new agreements with Australia, New Zealand, Japan, Singapore and the EU itself.

Britain has also rolled-over arrangements with more than 60 other countries, in a move which the Department for International Trade has claimed could help cover almost £800billion in world trade.

The Government took a step towards taking advantage of its recent agreements after it unveiled new measures to implement the UK’s deals with Australia and New Zealand in last week’s Queen Speech.

However, the antipodean deals have been criticised due to the threat they could pose to Britain’s agricultural industry, with the National Farmers’ Union claiming it could lead to unfair competition.

But Mr Jayawardena, who was returned as the MP for North East Hampshire with a 20,211-vote majority in 2019, said: “I genuinely do not believe that British farmers need to fear.

“In fact, I see it as a huge opportunity for British farmers, not just for the opportunity to sell quality British beef, British lamb to Australia but as a gateway to the Comprehensive and Progressive Agreement for Trans-Pacific Partnership (CPTPP), which of course we are in the ascension process to join.”

Opponents of the UK’s departure from the Brussels bloc also warn Britain’s post-Brexit trade deals will not make up for the drop in imports and exports with the EU.

Remainers warn Britain’s new trade deals will not make up for the drop in trade with the EU. (Image: Getty)

In comparison, goods exported outside the EU witnessed a £24.8billion drop and non-EU goods imported outstripped those from the bloc, with a £18.6billion increase over the same period.

However, the proportion of the UK’s total trade with the EU has been falling for some time.

Member states made up around 55 percent of total UK trade in 1999 but the figure was reduced to just 43 percent in 2021 after steadily declining for many years.

Best for Britain, a cross-party pressure group which backed the UK holding a second referendum on EU membership, has claimed “symbolic” trade deals with nations outside the bloc will not make up for the decline with the 27 member states.

The group’s chief executive Naomi Smith told Express.co.uk: “While trading with other countries sounds like a great idea, it is incredibly difficult for businesses to do it when the cost of shipping is at an all time high.

“When we take the Australia trade deal that was signed, I think that’s anticipated to increase UK GDP by about 0.01 percent, according to the Government’s own analysis on that, and the New Zealand trade deal could even reduce our GDP by the same amount.”

She then suggested the UK Government’s pivot away from the EU could lead to an increase in carbon emissions and potentially lower standards in produce.

Ms Smith also expressed concerns about the potential economic consequences of the UK opting to override elements of the Northern Ireland Protocol.

Although she claimed “a full scale trade war looks a bit less likely now than it did last week” following Liz Truss’ statement to the Commons on Tuesday, Ms Smith said “the UK Government has very firmly left the gun on the table”.

When asked about the potential impact of a trade war, she added: “If it happens, it would be catastrophic.

“I don’t think the EU would want to put punitive tariffs on Britain but if they view the entire Brexit deal as dead, as a consequence of the UK reneging unilaterally on the Protocol, then we could be back in a no-deal Brexit territory.

Jayawardena stressed the UK Government “would like” to negotiate through the impasse with the EU. (Image: @ranil/Twitter)

However, Mr Jayawardena stressed the UK Government “would like” to negotiate through the impasse with Brussels, before adding that the number of customs checks on the Emerald Isle had been “disproportionate” and therefore further action cannot be ruled out.

Despite Best for Britain’s concerns about a drop in EU trade, a prominent Eurosceptic Tory MP appeared to back the Government’s plan.

Mark Francois, who released a self-published memoir titled ‘Spartan Victory: The Inside Story of the Battle for Brexit’ in 2021, told Express.co.uk: “These deals are important because they’re the next phase of global Britain.

“We had a number of rollover deals but these are new and they’re with major countries and that means we now have the ability outside of the customs union, outside of the European Union, to strike new deals like this, which will give British consumers access to additional products around the globe.”

When asked if he approved of the speed at which negotiations had taken place, Mr Francois said: “Some people said you wouldn’t be able to negotiate these deals in a decade.

“I think that getting major deals with the likes of Australia and New Zealand this quickly is actually pretty good going.”

Mark Francois said: “These deals are important because they’re the next phase of global Britain.” (Image: Getty)

The Brexit-backing MP for Rayleigh & Wickford is also chairman of the European Research Group. (Image: Getty)

The chairman of the European Research Group also stressed that the UK could turn towards markets such as India, Brazil and the “great prize” of the United States.

However, there are concerns tensions between the UK and EU over Ulster could torpedo a future deal with the US after Democratic House Speaker Nancy Pelosi warned that Congress would not support a bilateral free trade agreement with Britain if the Government discarded the Northern Ireland Protocol.

After stressing the need to preserve peace in Northern Ireland and highlighting that Lord David Trimble, an architect of the Belfast Agreement, had called on the Government to step in and replace Ulster’s post-Brexit arrangement, the Rayleigh & Wickford MP said: “We absolutely have to address this in order to uphold and maintain the Good Friday Agreement and that’s an argument that I think we need to explain to our partners in the United States.”

Mr Francois also dismissed the risk of a potential trade war with the EU, saying the threat was “overblown”, and suggested eastern European nations could veto any move to tear up the trade and cooperation agreement given Britain’s support for NATO members in response to Russia’s “barbaric and illegal” invasion of Ukraine.

Responding to concerns about a fall in UK trade with the EU, Mr Francois said: “Global trade patterns show that the EU’s share of world trade was already diminishing even before the referendum as the EU, unfortunately, has become more bureaucratic, more sclerotic, with endless new EU directives.”

He added: “We can still obviously trade with our EU partners but this makes it much easier for us to agree deals with non-EU countries as well, so in that sense perhaps we get the best of both worlds.”