Brexit: We must ‘do right by Northern Ireland’ says Davis

The Conservative Party peer explained how Northern Ireland’s executive has formed the basis of the peace settlement for the past 24 years. With the Assembly election due to be held on May 5, Lord Hannan said Foreign Secretary Liz Truss has one month to act.

Lord Hannan, writing in The Telegraph, said: “Britain has every right to adjust the Protocol in a way that respects the interests of both communities in Northern Ireland, by ensuring that the North/South border and the East/West border are fully open. Indeed, not just the right – the duty.

“If the Protocol is in force after the 5 May election, there is no prospect of restoring the devolved government that has been the basis of the peace settlement these past 24 years. That gives Liz Truss, whose responsibility all this has now become, a month to act.”

The former MEP added that to act would require primary legislation to put in place watertight procedures to address the EU’s public concerns about goods standards.

He warned that such legislation may be opposed especially by “irreconcilable Remainers” in the House of Lords who are less interested in having a cordial relationship with the EU than trying to show Brexit was a failure. 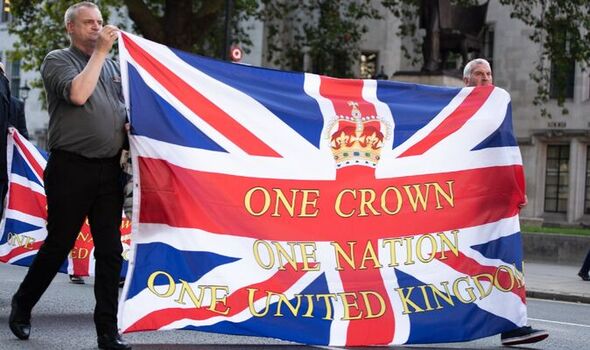 Lord Hannan said: “If so, the government will have no option but to face them down – even if that requires the creation of hundreds of new peers, as Asquith proposed during the 1910 crisis.”

He cautioned the EU might hit back with trade restrictions – despite the war in Ukraine, energy crisis and a fragile world economy – but all Britain could do is “carry on being a responsible neighbour”.

The protocol grants Northern Ireland special status to remain in the EU Single Market for agri-foods and manufactured goods.

At the same time, the province stays within the UK’s customs realms, meaning it still stands to benefit from any post-Brexit trade talks the UK agrees with other countries.

READ MORE ABOUT BRITAIN BRACING FOR A -6C ARCTIC BLAST

A sign ‘Larne Says No To The Irish Sea Border’ pictured at the entrance to Larne (Image: PA)

Talks between the UK and EU over the protocol have yet to result in a deal.

Mr Lewis told MPs that over the past six to nine months he has not seen the pragmatism or flexibility from the EU which would allow a deal.

Lord Hannan said the protocol has “smashed like a wrecking ball” through Ulster’s intricate politics.

A timeline of Brexit (Image: Express)

He added: “The assembly election campaign is now in full swing there but, as things stand, there is no chance of power-sharing being restored.

“Not one Unionist MP or MLA regards the current deal as acceptable, and you can see why.”

Lord Hannan listed Northern Ireland’s detachment from Great Britain for regulatory and tax purposes as among the problems.

He claimed: “The delicate web of compromises on which the 1998 Belfast Agreement rests – compromises that Unionists accepted with difficulty, involving, as they did, the release of IRA prisoners and the abolition of the RUC – has been shredded.”

The peer continued: “Dropping the most obviously destructive parts of the protocol would in no sense be unfriendly.

“Rather, it would be a proportionate measure aimed at preserving the Belfast Agreement.

“Britain is entitled in law to make such an adjustment. And, since it is putting in place unique and binding measures to prevent the leakage of goods across the Irish frontier, the EU will find it difficult to point to any harm it has suffered in consequence.”

Unionists have voiced strong opposition to the protocol, regarding extra checks on goods at Northern Ireland’s port as a border in the Irish Sea.

DUP MP Ian Paisley challenged Mr Lewis, saying the talk is very strong but he thought most people were wondering when action would be taken.

Mr Lewis said the UK Government has not yet triggered Article 16, which would suspend some elements of the post-Brexit arrangements, because ministers want to find an agreement for better stability and certainty for businesses.

Irish Taoiseach Micheal Martin told an audience in Londonderry on Friday that Brexit continues to “bedevil” politics in Northern Ireland.

Foreign Affairs minister Simon Coveney had to abandon a speech to the Hume Foundation in Belfast following a security alert recently when a van driver was threatened by two gunmen and a hoax bomb placed in the vehicle.

Mr Martin said: “The Irish government will never dismiss genuinely held concerns around the Protocol and we are working very actively with our EU partners to listen and engage on them, but any opposition must always be peaceful. That is simply fundamental.

“There are democratic and lawful means for all concerns to be raised and resolutions worked through. That is where our focus must remain.”

Stormont collapsed in 2017 when the DUP and Sinn Féin split in a bitter row over the former’s handling of a green energy scandal.

A draft deal to restore the country’s government, published in January 2020, was accepted by both parties, paving the way for power sharing to be restored.

However, division remains with DUP leader Sir Jeffrey Donaldson suggesting on Sunday that Sinn Fein was fixating on bringing about a united Ireland when it should be focused on issues affecting families in Northern Ireland.

Sinn Fein’s Pearse Doherty said the region’s biggest unionist party wanted to make the election about the Protocol and was not interested in real delivery for people.

The claims were made ahead of two significant pre-election events for the parties.