It’s been more than a few months, but Tiffany Haddish is back as guest host of The Ellen Degeneres Show.

This time, while leading the talk show, the actress and comedian sits down with Bridgerton star Simone Ashley, for an episode that airs on Thursday, April 14.

Haddish also opens up about her own life, particularly the time since she last hosted the show in October 2021, which includes confessing she’s single and ready to mingle, what she did during a visit to Africa, as well as her DUI arrest in the new year of 2022. 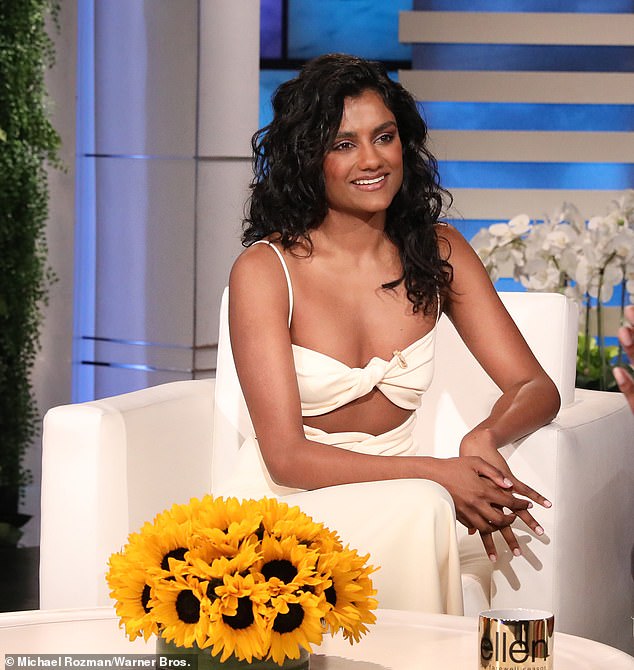 Off the top during her monologue, Haddish dove right into her dating life, or lack there of it, rolling off the various dating apps she has signed-on to of late.

‘I’m getting back into the dating scene, which means I’m on the apps: Raya, Tinder, Postmates, Candy Crush, and that therapy app BetterHelp, okay. Hey you never know where you gonna meet a man, and if he’s a therapist it might be helpful,’ she began.

She went on to reveal that, at this point in her life, she knows exactly what she wants, when it comes to dating: ‘A man with a perfect credit score.’

‘Now I don’t care how tall they are; how old they are; how much they weigh, the only number that matters to me that I care about comes from FICA (Federal Insurance Contributions Act), because credit scores show how responsible they are. I’m just saying I’m a lot to handle.’ 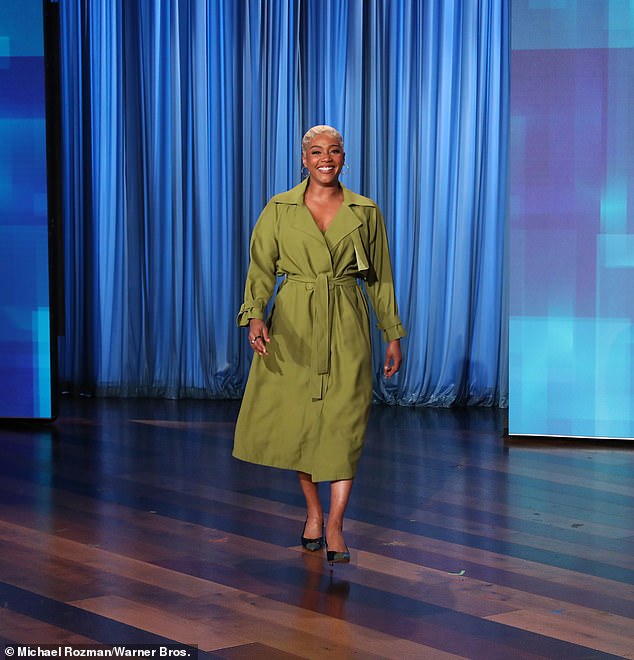 Guest host: Tiffany Haddish sat in for Ellen as guest host of The Ellen DeGeneres Show 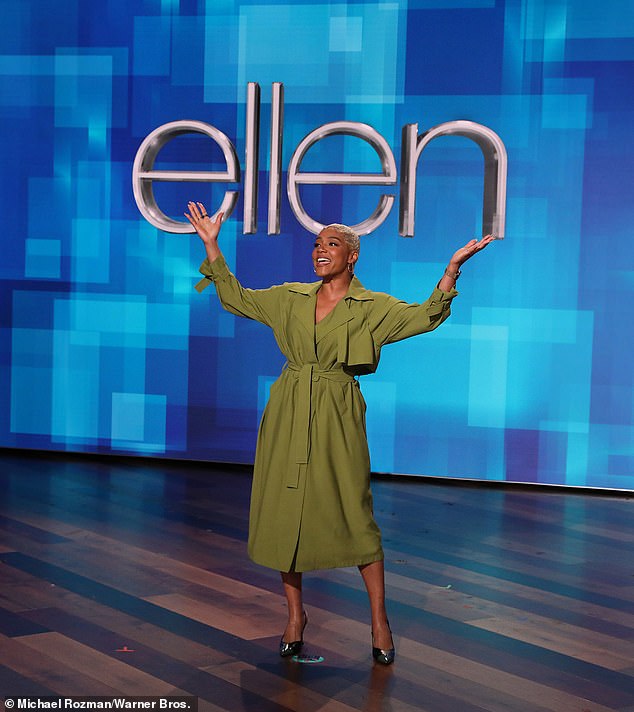 Single and ready to mingle: Haddish joked about how she has signed-on to various dating apps now that she’s single again, looking for ‘a man with a perfect credit score… because credit scores show how responsible they are. I’m just saying I’m a lot to handle’

During the monologue, Haddish revealed that she spent her holidays visiting her grandfather’s village, Geza Keren, in Eritrea, which she called ‘amazing.’

When addressing her DUI arrest, she joked that she had been praying for God to send her a man, and in the end they came in the form of four police officers.

‘They got good benefits and everything so I can’t even be made,’ she joked, adding, ‘And yes I did get charged with a DUI, which stand for Dumb Unfortunate Incidents.’

It’s at this point that she asked the audience if they wanted to see her mugshot.

‘Still cute… looking good,’ she declared when the mugshot photo popped up in the studio monitor. ‘I’m going to turn that into an NFT.’

She revealed that she tried to get the body-cam footage but they wouldn’t give it to me. This is true. I even had Ellen call and they still said no. Listen, if they won’t give it to a rich white lady, nobody is going to get it.’ 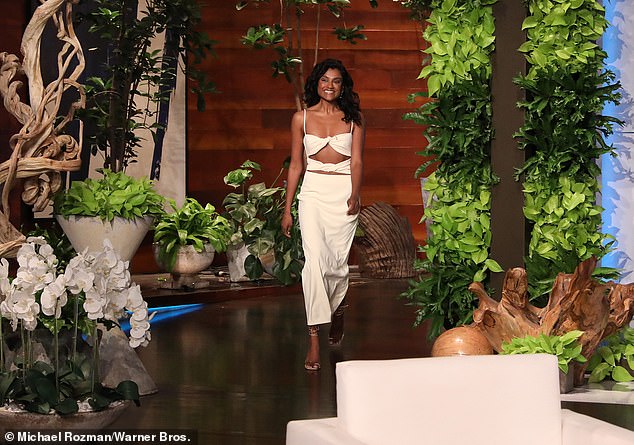 Transition: Off the top of her sit down, Ashley revealed the first gig she booked after she moved from her Native England to Los Angeles to pursue acting was a ‘really small background role in Straight Outta Compton (2015) 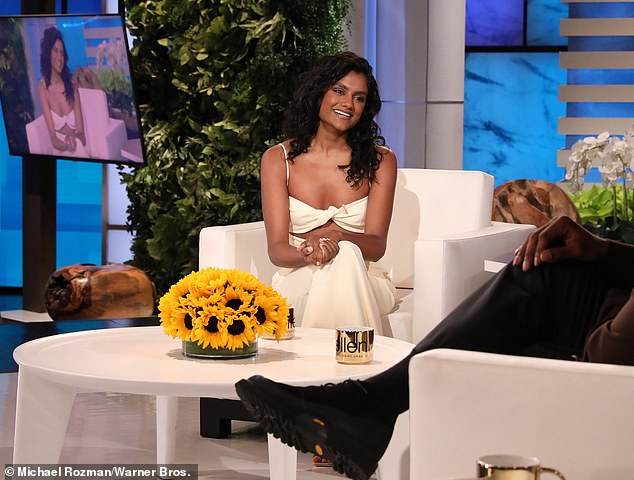 Making her mark: The actress shared that she did a couple of background acting work a couple of times before she landed her breakout role in the Netflix hit series Bridgerton

The Camberley, Surrey, England native revealed the first gig she booked after she moved to Los Angeles to pursue acting was a ‘really small background role in Straight Outta Compton (2015).’

While she shared she only did background work a couple of times, Haddish jumped into the conversation to share that she did it ‘about 200 times, and I always looked into the camera. They always made me move to the back. I would find my way back up by the camera.’

After admitting she has training as a classical opera singing, the conversation turned to Ashley’s breakout role in Bridgerton. She plays Kathani ‘Kate’, Viscountess Bridgerton (née Sharma). The show has been a huge success, with the second season, having premiered on March 25, hit number one in 92 countries amassing 193 million hours of viewing time in its premiere weekend, the highest for any English-language Netflix series in its first three days. 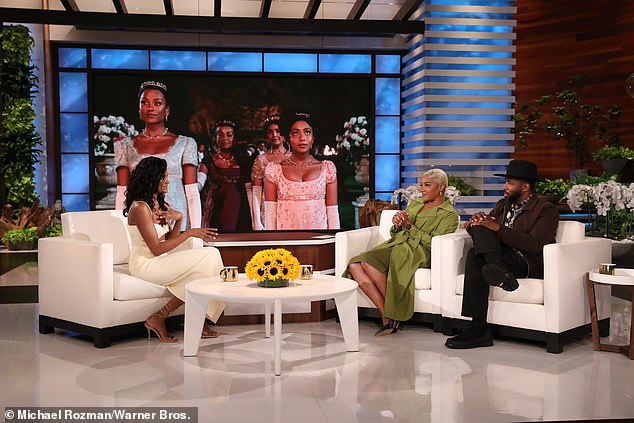 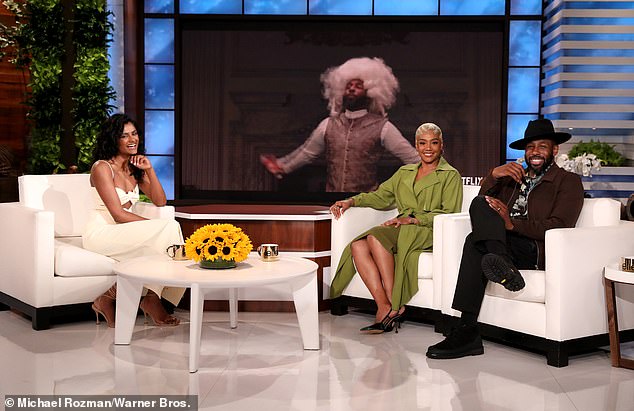 Bridgerton dishing: Ashley chats about the role of her character Kate in season two, and how ‘she’s not a people pleaser, and she’s wasn’t afraid to be opinionated and controversial; break the rules a little bit’

Ashley, 27, gave a brief synopsis of what happens with her character in the new season.

‘I like the fact that she’s not a people pleaser, and she’s wasn’t afraid to be opinionated and controversial; break the rules a little bit. I mean she was there to protect her sister and I wanted to stay true to that throughout the whole story.’

She also opened up about Austin the corgi dog, and how he fit the aesthetic of the show, and that they had feed him sausages to get him to do his scenes, at times.

Just this month, it was announced that Bridgerton had been renewed for a third and fourth seasons.

Haddish also talks with actor Joe Manganiello, who opens up about his life with wife Sofía Vergara, and plays a revealing game of Never Have I Ever!

Again, Tiffany Haddish fills in for Ellen as host of The Ellen DeGeneres Show on Thursday, April 14. 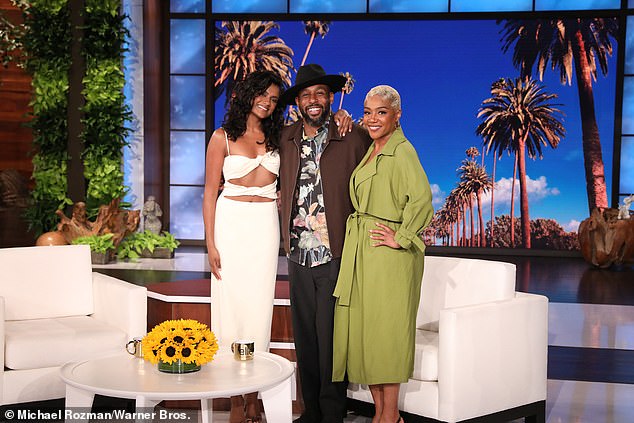 Bonafide hit for Netflix: Just this month, it was announced that Bridgerton had been renewed for a third and fourth seasons 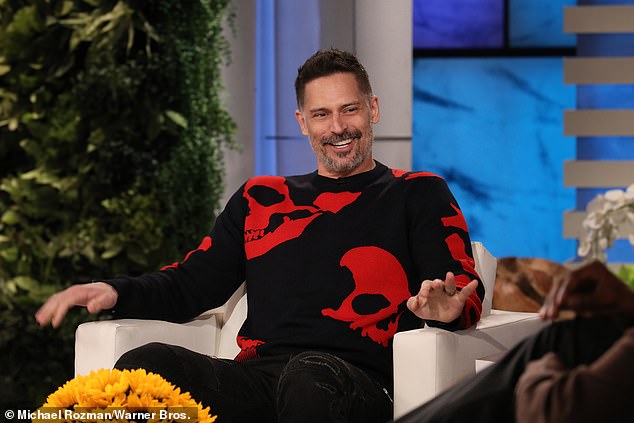 Haddish and DJ tWitch also talk with actor Joe Manganiello, who opens up about his life with wife Sofía Vergara, and the three play a revealing game of Never Have I Ever! 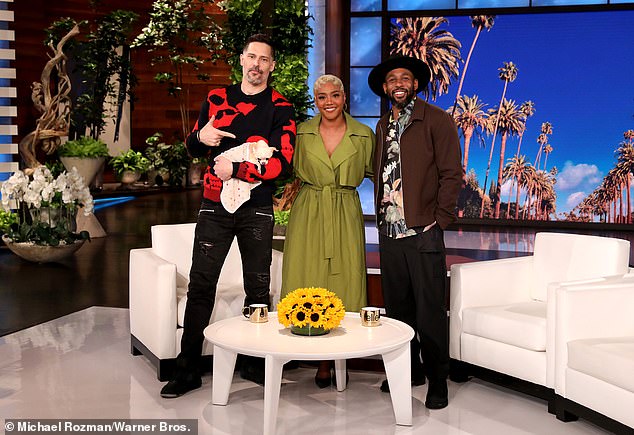 Guest: Tiffany Haddish fills in as host of The Ellen DeGeneres Show on Thursday, April 14