The new series returns to Netflix on Friday and it’s guaranteed to be as steamy as ever.

However, one Bridgerton actor who pointlessly got themselves all pumped up for for some raunchy scenes was Luke Thompson.

The star, who plays Benedict Bridgerton, was mistakenly told to get in shape for sex scenes, due to show bosses mixing him up with another cast member. 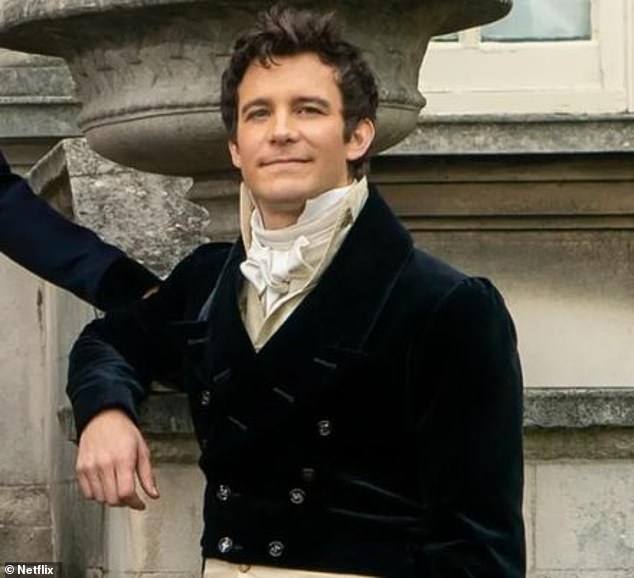 Whoops: Bridgerton star Luke Thompson who plays Benedict Bridgerton on the show was wrongly told to get in shape for sex scenes as bosses mixed him up with his onscreen brother Luke Newton who plays Colin Bridgerton

Nicola Coughlan, who stars as gossip columnist Penelope Featherington, revealed: ‘Luke Thompson got mixed up with the other Luke — Newton — on the show.

‘They offered him a personal trainer for his intimate scenes, and we don’t get all the scripts at once, so he was like, “I wonder what that’s going to be?”.’

All was not lost though, because as soon as they realised the mix-up, the producers allowed him to keep the personal trainer. 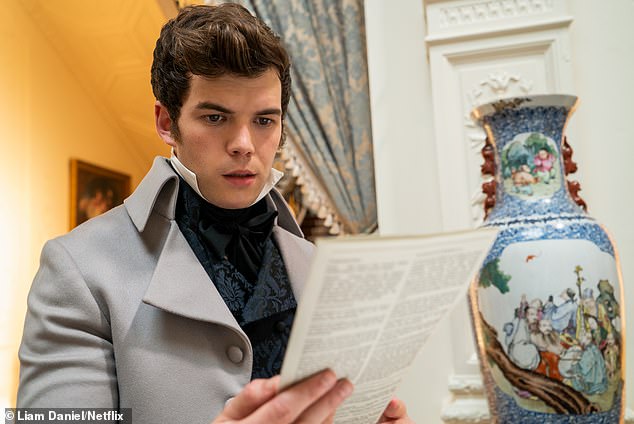 Whoops: The steamy scenes for the period drama were meant for Luke Newton

Meanwhile Nicola also revealed on Tuesday that she was terrified executives of the show would think she was drunk on her first day on set after she fell over three times while trying to walk in heels.

The pretty blonde said she was left embarrassed after telling creators of the hit Netflix series that she could walk in heels, before toppling over while filming on her first day on set.

Nicola, who plays Penelope Featherington in the hit show, said she was scared about getting fired so agreed to wear ‘crazy heels’, but then fell over three times as she tried to walk in them.

The Derry Girls star said she was scared people would think she was ‘crazy’ or drunk, when in reality she just couldn’t walk in the shoes.

Speaking on The One Show on, she explained: ‘Ellen Mirojnick, who is the costume designer on season one, said ‘you’re tiny, you’re too small so we’re gonna put you in heels’.

‘And I was just terrified to get fired because I couldn’t believe my luck at getting the job. I said ‘yes, absolutely’. If they were like you have to wear a giant clown suit I would have been like ‘I would love that, yes please’.

‘So I agreed to wear these crazy heels, and then on my first day on set we were walking around and I toppled over not once, not twice, but three times.’ 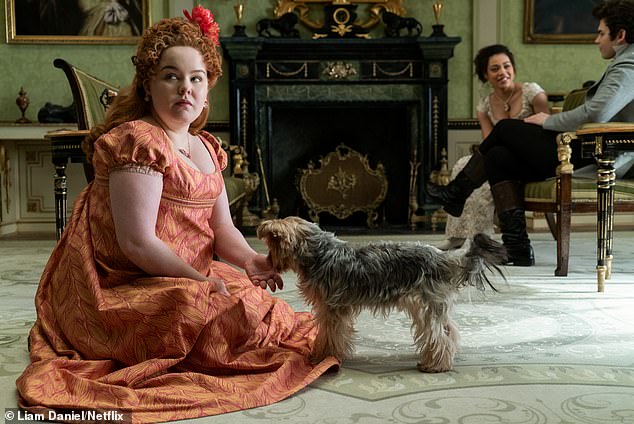 Malfunction: Nicola revealed on Tuesday that she was terrified Bridgerton bosses would think she was drunk on her first day on set after she fell over three times while trying to walk in heels

She admitted that one of her embarrassing falls even happened while she was holding a dog, who she insisted was unharmed in the topple.

‘Three times, and I thought they’re going to think I’m drunk, they’re gonna think I’m crazy, and I was holding a dog at the time.’

Nicola said that Bridgerton bosses ‘very quickly realised’ that she could not wear heels, cutting the wardrobe choice out for her character Penelope.

She also admitted that she ruined the big plot twist of season one, telling her friends and family that the anonymous gossip writer Lady Whistledown was Penelope before it was revealed.

She said: ‘I just told all my friends and family and they were all fuming with me, and they were like ‘it really ruined the end of it because we just knew’.’ 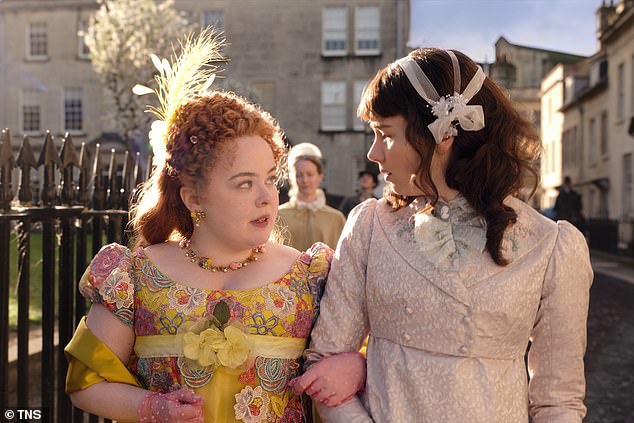 Oops! She also admitted that she ruined the big plot twist of season one, telling her friends and family that the anonymous gossip writer Lady Whistledown was Penelope

The TV star is reprising her role as Penelope Featherington in the hit period drama, which is returning to screens this month.

Based on a series of books of the same name by Julia Quinn, the Netflix show follows the eight siblings of the Bridgerton family as they attempt to find love in Regency-era England.

Speaking on Claudia Winkleman’s BBC Radio 2 show earlier this year, she said: ‘(After) that reveal at the end of series one, you very much get to see behind the curtain in series two.

‘We see how she gets away with the things that she gets away with. And for me, it was so much fun because in series one she’s a shy, retiring wallflower, and then series two you go, ‘Oh, she’s got all this new stuff going on’, and it was extremely fun to film.’

Nicola added that Penelope also gets more control over her fashion choices this time as she starts to ‘find her own path’.

Speaking of the show’s success, she said: ‘It’s absolutely bonkers how many people sort of fell in love with it. It’s amazing.’

Nicola added that the cast were all ‘really excited’ to get back to the set to begin filming series two, but said it felt ‘really strange’ returning to something so high profile.

She said: ‘Pre-lockdown it was just our little job we were going to and then you go, ‘Oh, I’ve seen this one on Netflix’. But we were all just really excited to get back.’

The new season of Bridgerton will be released on Netflix on March 25. 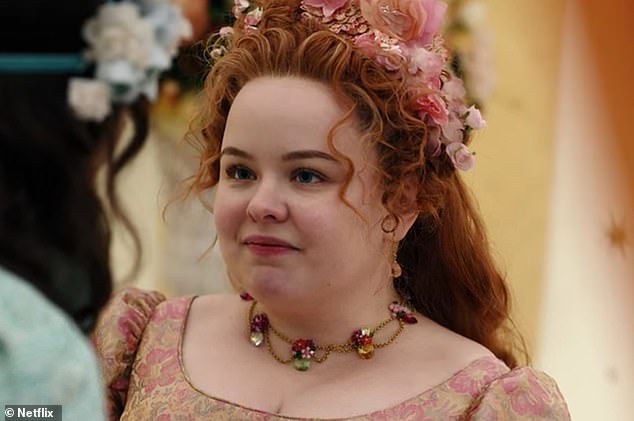 Exciting: The actress is reprising her role as Penelope Featherington in the hit period drama, which is returning to screens this month (pictured in-character)