Government dashboard data showed the combined infections on Saturday, Sunday and Monday were 54 per cent higher than the total last week.

Officials have stopped releasing the daily figures at weekends as part of a wind-down of the way the epidemic is reported, meaning a three-day total is released every Monday.

Another 139 Covid fatalities were registered over the weekend, up by just one on the 138 last week. Deaths lag by several weeks behind cases so any fluctuations would not be expected for some time yet.

Meanwhile, latest hospital data shows there were 1,287 admissions were recorded on March 1, up 15 per cent on the tally from a week ago.

The flare-up in infections comes after England’s ‘Freedom Day’ on February 24 and amid the spread of a more infectious version of Omicron.

Experts warn the more infectious variant may cause some fluctuations in case rates, but say there is no reason to panic because there is no evidence the strain is more likely to cause severe disease. 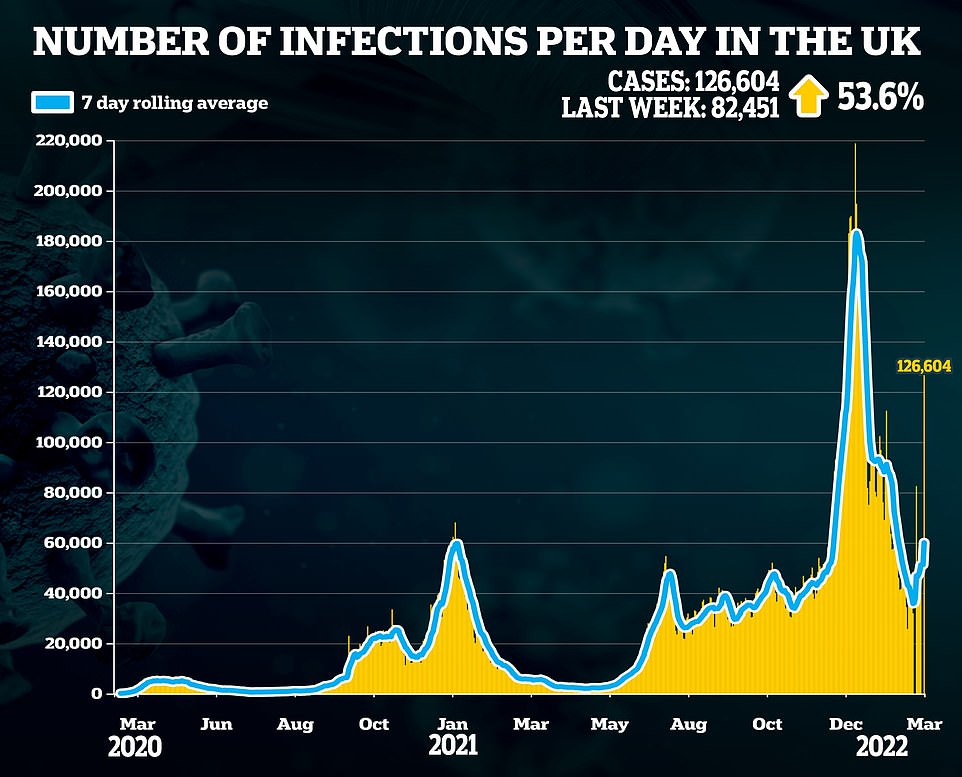 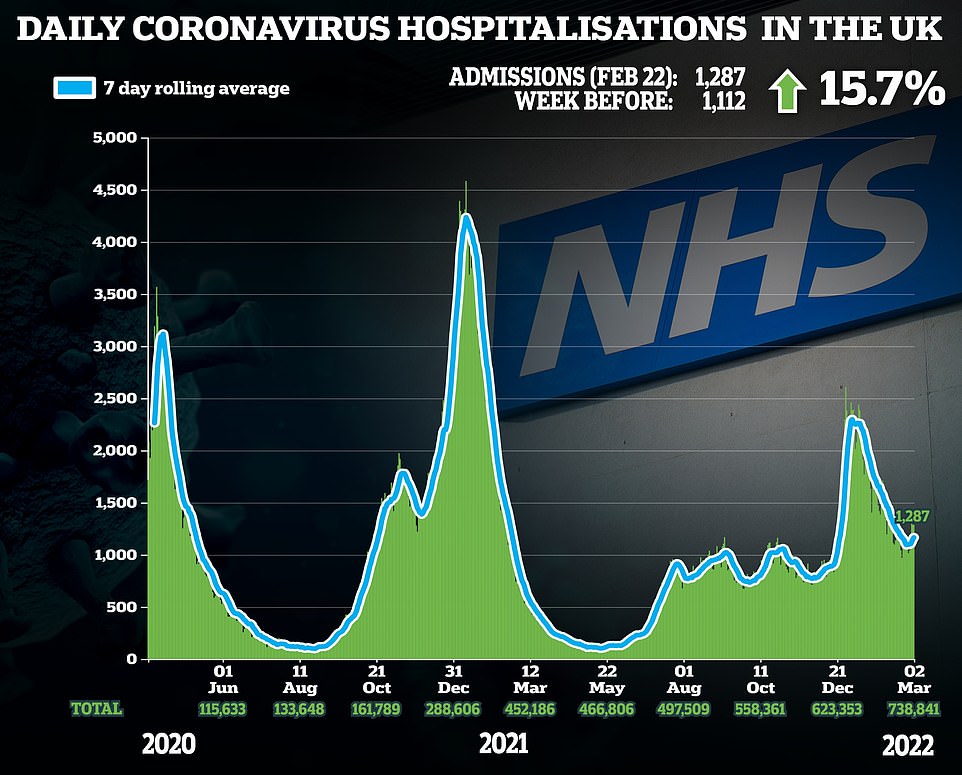 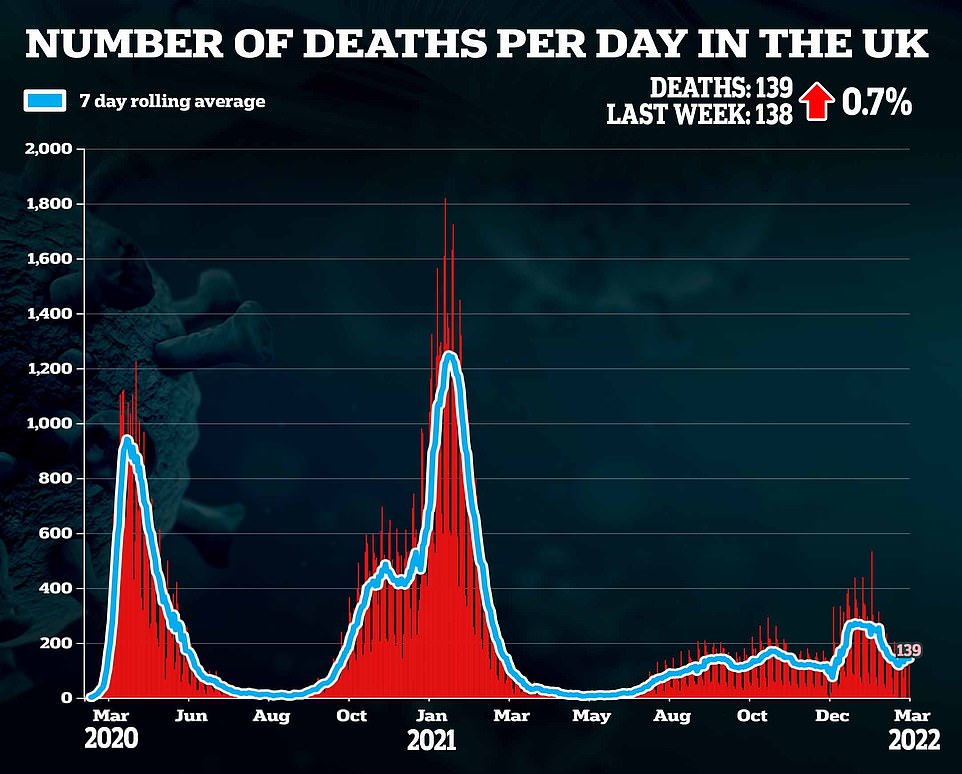 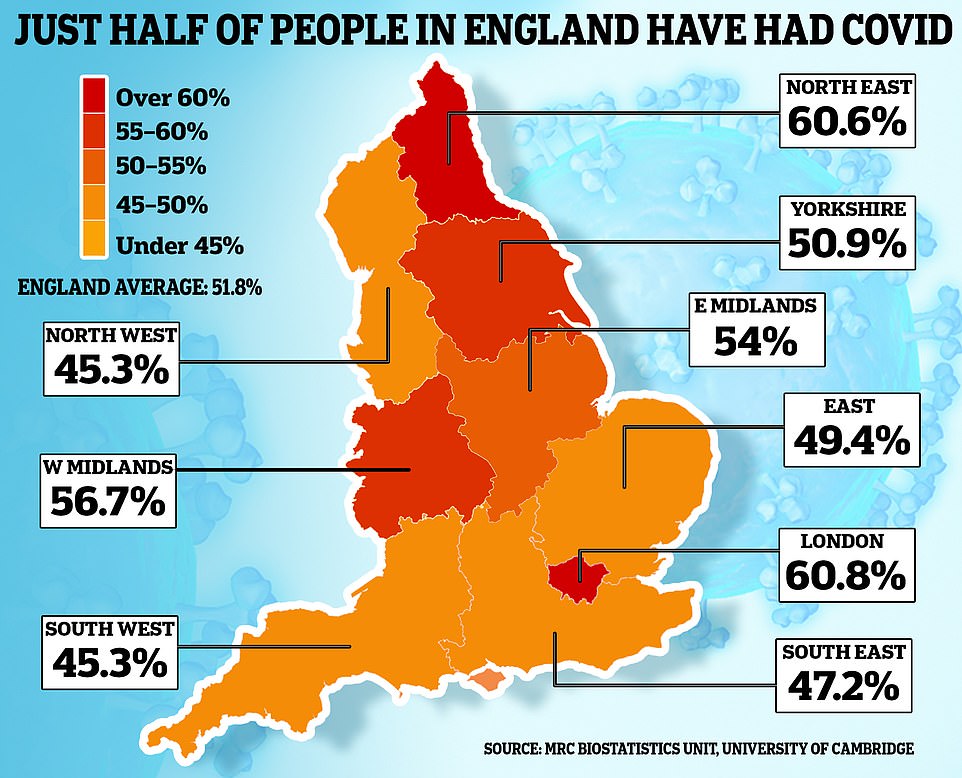 Modelling from Cambridge University scientists suggests only 51.8 per cent of people in England had caught the virus by February 23, two years into the pandemic. Despite high case levels since Omicron emerged, which peaked at 234,765 per day in January, 48.2 per cent of the population — 27.3million people — are yet to have a first infection, according to the estimates. The map shows the Covid attack rate — the proportion of the population that have been infected — across the country, with regional prevalence varying from 45.3 per cent in the North West and South West to 60.8 per cent in London

Infections rose across all four UK nations, with the sharpest rise in Wales (up 200 per cent) followed by England (up 57 per cent), Scotland (up 50 per cent) and Northern Ireland (up 12 per cent).

Almost 30million people in England have managed to avoid Covid since the pandemic began, No10’s scientific advisers believe amid warning signs that the outbreak is growing again.

Cambridge University scientists tasked with tracking the pandemic suspect only 51.8 per cent of the population has caught the virus in the last two years.

Experts told MailOnline they were ‘not particularly concerned’ by the fact that half of the country have not been exposed to the virus.

It ‘doesn’t mean the rest are susceptible’, according to Dr Thomas Woolley, a mathematical biologist at Cardiff University.

Officials estimate that 98 per cent of people in England have antibodies against Covid thanks to high vaccination rates and the combination of jabs and natural immunity has shown to provide the strongest protection.

‘I’m not panicking – I’m not thinking we should suddenly go back to restrictions or protections, but I am concerned,’ he said.

‘As we mix more, the virus gets more opportunities, so we’ve got 10,000 cases a day, we’ve had a little bit of an increase in those in hospital – it’s not huge, so people shouldn’t panic, but this disease is not over and it’s not done with us.’

He stressed the importance of vaccine uptake to allow for the continued suppression of the virus.

‘You should still be cautious, particularly around those who are vulnerable,’ he said.

‘So get your vaccine, particularly if you’re getting a letter now if you’re in one of these elderly groups, or vulnerable groups.

‘Test – because that testing is still available – and follow the guidance.’

It comes after No10’s scientific advisers said almost 30million people in England are still yet to catch Covid since the pandemic began.

Cambridge University scientists tasked with tracking the pandemic suspect only 51.8 per cent of the population has caught the virus in the last two years.

Experts told MailOnline they were ‘not particularly concerned’ by the fact that half of the country have not been exposed to the virus. It ‘doesn’t mean the rest are susceptible’, according to Dr Thomas Woolley, a mathematical biologist at Cardiff University.

Officials estimate that 98 per cent of people in England have antibodies against Covid thanks to high vaccination rates and the combination of jabs and natural immunity has shown to provide the strongest protection.

He added: ‘Natural infection gives longer-lasting protection than any vaccine and the now-predominant Omicron variant generally gives a mild infection.

‘Consequently, the more low-risk people who’re infected the better, for it will build the strongest wall of immunity, cementing and accelerating our inevitable move from pandemic to endemic.’ 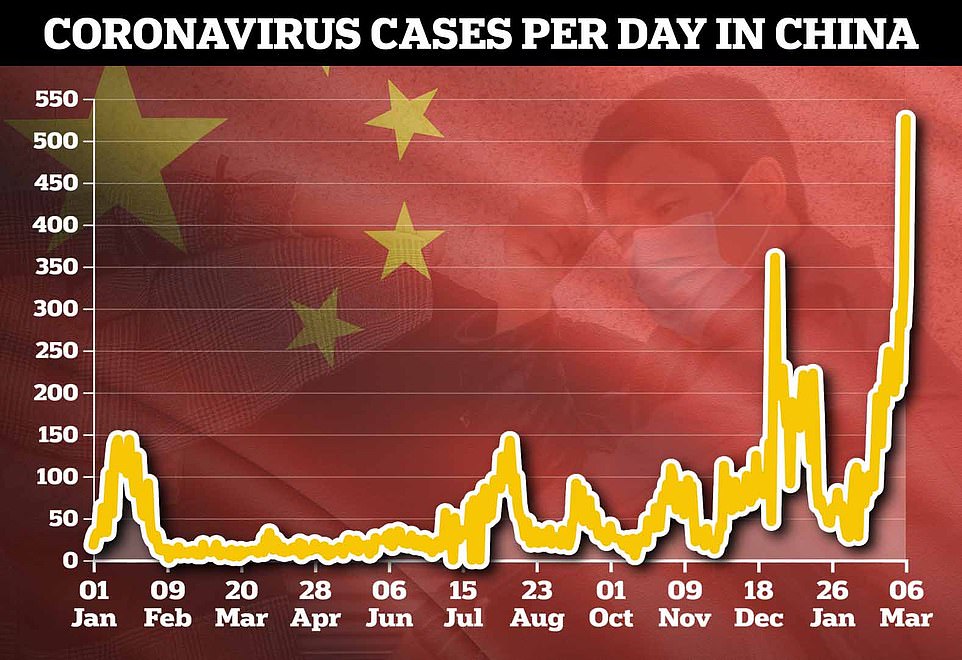 China’s daily Covid tally over the last year is shown above. Daily cases have now spiked to their highest level since the initial Wuhan outbreak

Beijing officials logged 526 infections over the last 24 hours, including 312 that were asymptomatic — did not display any symptoms.

Outbreaks are emerging in dozens of cities including the financial centre Shanghai, the northern port city of Qingdao and the southern city of Dongguan among others.

No data on Covid deaths and hospitalisations was published.

China is the last major country sticking to the brutal ‘zero Covid’ strategy, which sees lockdowns and mass testing imposed when the virus is detected.

It is struggling to keep a lid on the more transmissible Omicron variant, after a study suggested the nation’s home-made vaccine offers virtually no protection against the strain.

Suzhou, a city of 6.7million next to Shanghai, is currently under lockdown, alongside Baise, a city of 3.6million near the border with Vietnam.

Beijing has repeatedly been accused of fudging its Covid data during the pandemic to make outbreaks appear less severe.

In neighbouring Hong Kong, escalating Covid cases are now seeing hospitals and quarantine centres being overwhelmed. Its deaths from the virus are also spiralling, with 233 recorded yesterday compared to 82 just a week ago.

It comes after daily Covid cases in the UK rose for three days in a row before the weekend, with the outbreak now likely growing. The Government has stopped releasing the daily figures at weekends but an update this afternoon will reveal if that trend has changed.

The rise in infections coincides with the emergence of an even more infectious strain of Omicron called BA.2, which has become dominant across England. It also follows Boris Johnson’s decision to ditch all of England’s final Covid restrictions, including the requirement to isolate when infected.

But warning against future lockdown curbs, Professor Livermore said eventually everyone will catch Covid and ‘restriction merely drags out this process, possibly to a time when a less benign variant is predominant’.

Scientists also insist they aren’t concerned by the Cambridge team’s estimate, arguing the grim tallies of 1,000-plus deaths a day are consigned to history forever.

Scientists today revealed they had uncovered more than a dozen genetic quirks that may explain why some people are more vulnerable to severe Covid than others.

Up to 16 changes to DNA were found in patients critically ill with the virus, many of which are involved in blood clotting and inflammation.

One genetic variant was found to be slower at signalling to the immune system that cells are under attack from the virus.

Having just one of the genes could be the difference between getting a cough or being admitted to intensive care, according to the biggest study of its kind.

As part of the Government-funded research, experts at the University of Edinburgh studied the genes of more than 57,000 people across the UK, including 9,000 Covid patients.

This is not the first time studies have found different genes could predispose certain people to becoming severely ill with Covid.

But the scientists hope the latest finding will help identify new drugs and treatments in the future. Their earlier work has already helped lead to the discovery that arthritis drug baricitinib could treat certain patients at risk of severe disease.