Britain's Covid cases jump by a THIRD in a week

Britain’s new Covid surge continues to grow with cases jumping by a third in a week, with data suggesting as many as one in 18 people have the virus in some parts of the country.

The Office of National Statistics (ONS) estimated nearly 2.3million people in the UK had the virus on any day for the week ending June 24 with analysts linking the rise to of the new Omicron sub-variants BA.4 and BA.5.

There were 1.8million Covid infections  recorded in England alone in ONS’s latest infection survey, about in 30 people, a rise of about 38 per cent compared to the previous week.

Scotland recorded the highest Covid levels of the UK nations with 288,200 people estimated to have Covid, about one in 18 of the population.

Cases also continued to rise in Northern Ireland and Wales.

The rise in cases comes just a week after the UK Health Security Agency confirmed the Omicron sub-strains BA.4 and BA.5 are now the dominant strains in the UK.

They are thought to be even more infectious than their ancestral versions, which were to blame for cases reaching pandemic highs in December and April, but are just as mild.

Celebrations for the Queen’s Platinum Jubilee, half-term holidays and warm weather are also thought to be fuelling the latest surge. Some have also pointed to Britons mistaking Covid symptoms for hay fever. But infectious disease specialists have confidence the upcoming wave will be no worse than other peaks seen this year. 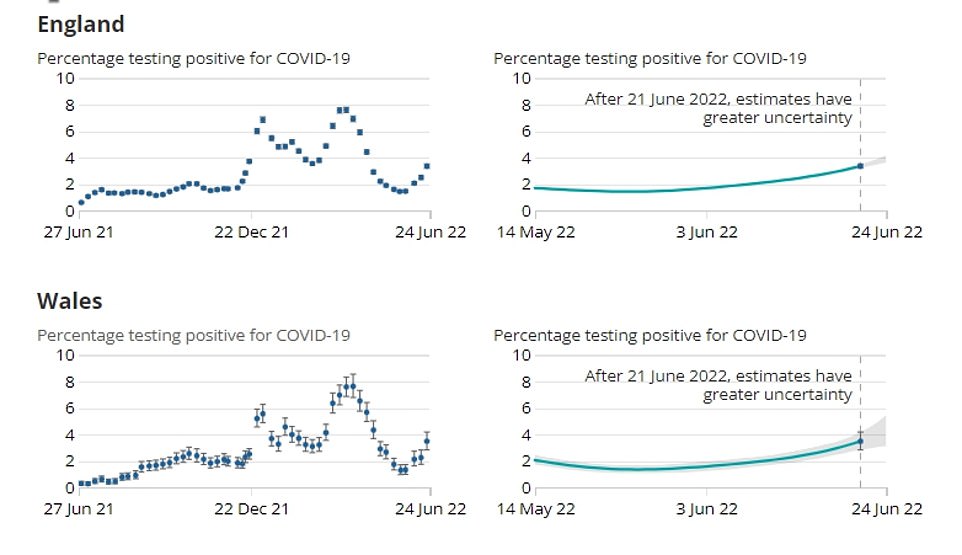 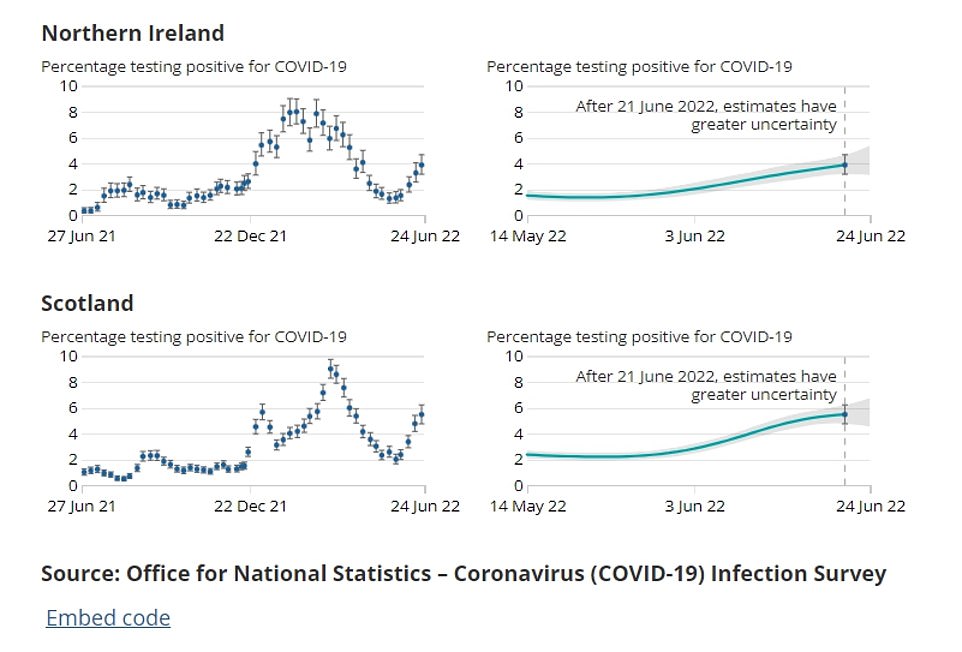 The ONS data also estimated that 106,000 had the virus in Wales last week, about one in 30 of the population, similar to England.

Northern Ireland continued to enjoy the lowest levels of the virus in the UK with only 71,000, about one in 25 people, infected though this is still a rise compared to last week’s estimate.

The weekly ONS report is now considered the best barometre of the outbreak since free-testing was axed.

The latest figures on the virus came as Boris Johnson refused to definitively rule out more Covid restrictions — as Covid hospital admissions continue to rise.

The Prime Minister said there were no plans for curbs ‘at the moment’ as he appeared to leave the door open to future measures.

He was given the opportunity to rule out ever imposing restrictions again in an interview with LBC this morning at a NATO summit in Madrid.

‘I think that we see no reason for that at the moment and the most important thing is vaccination,’ he said.

But Mr Johnson suggested that a sharp spike in hospitalisations could be the trigger point for new restrictions.

He added: ‘We’re not seeing the types of pressures on the medical services that would lead us to anything like that.’

Daily Covid hospital admissions have almost trebled in the last month to around 1,200 — though only a fraction of patients are primarily ill with the disease.

Mr Johnson refused to rule out a future lockdown in April, saying it would be ‘irresponsible’ to discard something ‘that could save lives’ if a deadlier variant emerges. 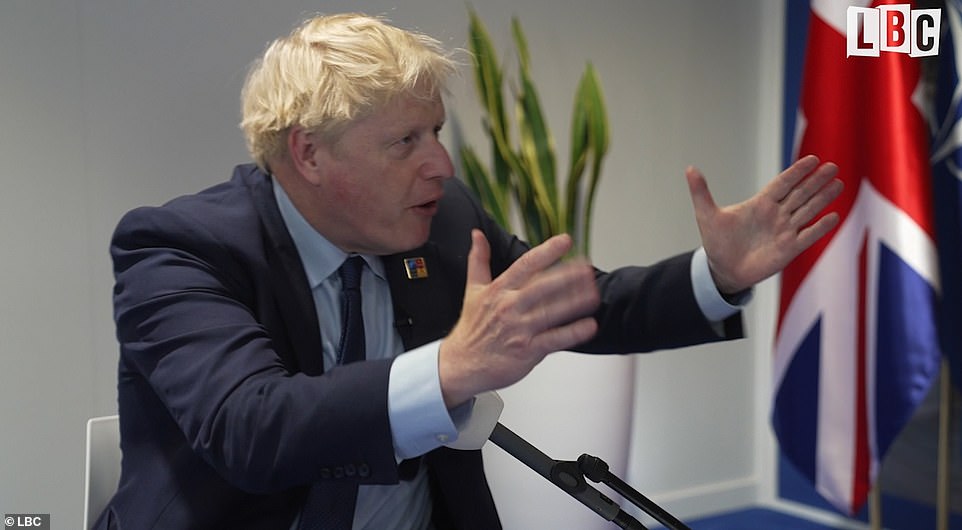 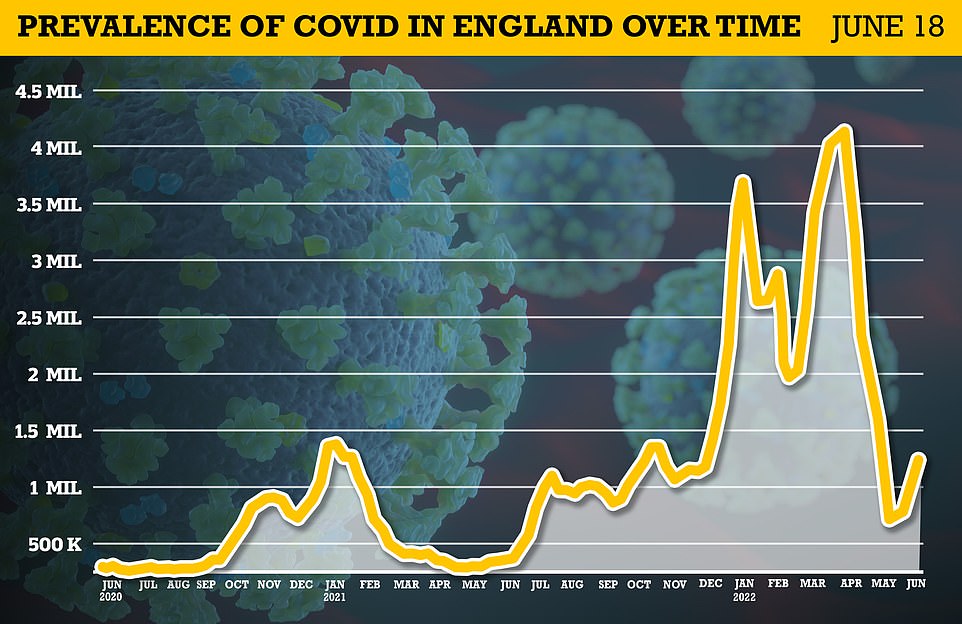 Covid infections have nearly doubled in a fortnight in England, rising to about 1.4million in the latest week

Daily Covid hospital admissions have almost trebled in the last month to around 1,200 — though only a fraction of patients are primarily ill with the disease

Covid case numbers have became less important now that vaccines and natural immunity have severed the link between infection and severe illness.

Ministers are now looking to NHS virus figures to gauge the severity of the outbreak, which have been rising for over a month.

Britain should brace for an early flu outbreak that will coincide with increasing Covid and monkeypox cases, a top expert has warned.

Health officials have said they are expecting an ‘early influenza wave’ in the UK because there has not been a ‘proper’ flu season since the start of the Covid pandemic.

Dr Susan Hopkins, chief medical advisor at the UK Health Security Agency (UKHSA), said she is watching Australia – currently in its winter season – ‘very carefully’ after a strain of influenza ‘started early and spread fast across all age groups’.

She said the country is ‘having its worst flu season in five years’, which could replicate in the UK as early as September.

Meanwhile, Dr Hopkins added that we will see at least one more Covid wave later this year partnered with an ‘ongoing transmission of monkeypox’.

There are also mounting fears that the NHS will be struck down at the same time by Covid, with colder weather and darker evenings leading to increased social contact indoors — where viruses find it easier to spread.

Flu is a seasonal menace on the NHS, with outbreaks more likely between September and March because colder weather forces more people indoors where the virus — like Covid — finds it easier to spread.

But influenza virtually disappeared last winter amid lockdowns aiming to control the spread of Covid.

But the admission figures alone do not tell the full story as analysis suggests only a third (37.7 per cent) are primarily ill with Covid.

The rest are known as ‘incidental’ cases, those who went to hospital for a different reason but happened to test positive.

Incidentals have become increasingly common because the highly infectious but milder Omicron subvariants are so prevalent in the wider community.

Covid deaths — another key metric — have plateaued at around 20 per day in England and Wales, according to the Office for National Statistics.

The ONS breaks down deaths that were primarily caused by the virus, as opposed to it being a secondary factor.

However, fatalities are the biggest lagging indicator, and it can take weeks for them to rise on the back of an uptick in infections.

During his interview on LBC, Mr Johnson insisted that getting vaccinated against Covid was the most important way to avoid future restrictions.

Fourth doses — or a second booster — have been dished out to four in five people over the age of 75 and those who are immunosuppressed.

Latest data from the Office for National Statistics (ONS) suggests 1.36million people in England were infected during the week to June 18.

That is 70 per cent more than the 797,000 who were estimated to have had the virus at the very start of June.

The outbreak has been fuelled by the spread of BA.4 and BA.5, which are thought to be more infectious but just as mild as the original Omicron strain.

New estimates from the ONS will be published this afternoon.

A separate ONS Covid fatality report showed the virus was directly responsible for just 161 deaths in England and Wales in the most recent week, or 23 per day, on average.

Sir Jonathan Van-Tam last week dismissed hysteria that a recent uptick in Covid cases marks a new wave of the pandemic, saying Britain has to learn to live the virus. 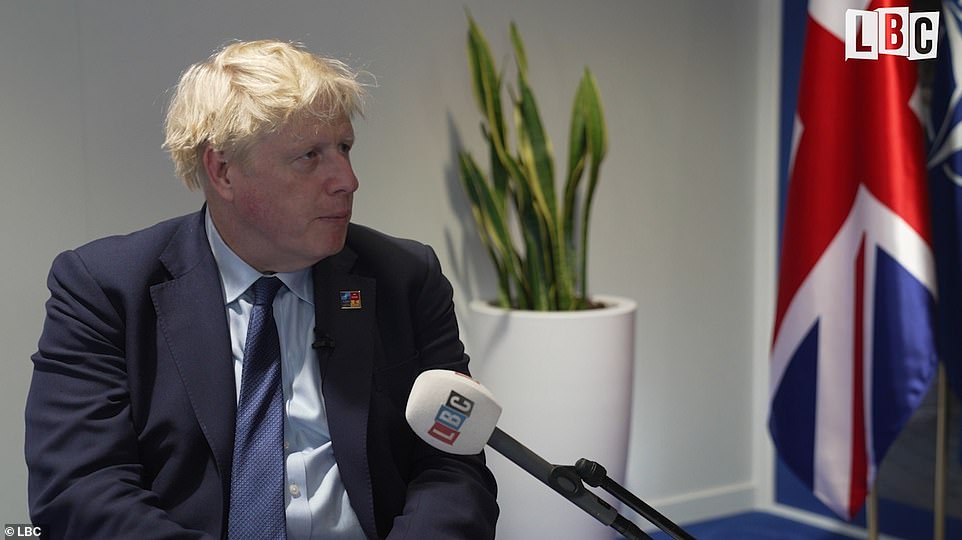 Referring to hospital admission and death data, the country’s former deputy chief medical officer claimed there is ‘nothing alarmist in these figures’.

Sir Jonathan revealed even he had abandoned wearing his face mask.

The spread of the new variants is thought to have been accelerated during large gatherings for the Queen’s Platinum Jubilee and half-term holidays.

Some have also pointed to Britons mistaking Covid symptoms for hay fever.

The UKHSA estimated that BA.4 and BA.5 account for approximately 22 per cent and 39 per cent of cases, respectively.

This suggests that BA.5 is likely to become the dominant variant in the UK.

It's the Arnie effect! Pumping iron in your 70s can help you live longer, study suggests

Prepare for the twindemic! Health chiefs warn Covid will strike at same time as flu this winter

Are Alexa and Siri making our children DUMB?