The latest Purchasing Managers’ Index survey from S&P Global and the Chartered Institute for Procurement and Supply gave the country’s service sector a reading of 50.0 for September, meaning it neither expanded nor shrunk.

This figure was 0.9 percentage points down from the prior month and represented the industry’s weakest performance since February 2021, when Britain was in the middle of its third national lockdown. 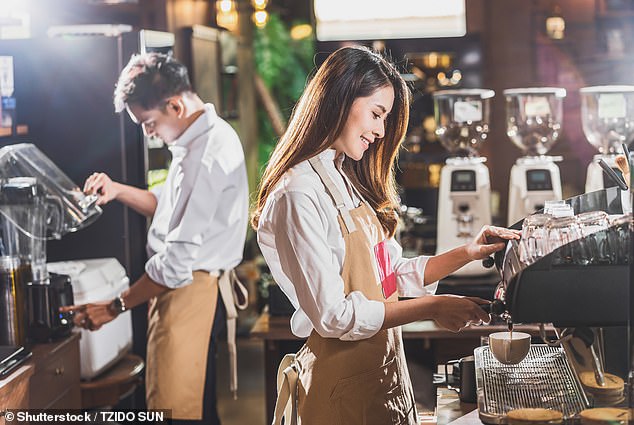 Pressures: Amidst a cost-of-living crisis, Britain’s households have been cutting back spending, particularly in discretionary trades like hospitality and leisure

Business optimism for the year ahead also declined to its worst level in two-and-a-half years amid signs of an impending recession, recent interest rate hikes and the current energy crisis.

More than half of survey respondents said their input prices had gone up during September, whereas only 1 per cent reported a drop despite inflationary pressures continuing to moderate.

Higher utility bills drove much of the increase in costs, but rising employee salaries and supplier prices were further noted as major contributory factors.

The report noted that service firms ‘overwhelmingly’ passed their increasing costs onto clients, even though households have been cutting spending, particularly in discretionary trades like hospitality and leisure.

‘Domestic consumers had cost-of-living pressures and not hospitality uppermost in their minds,’ remarked Dr John Glen, chief economist at the CIPS.

Britain’s service sector is still performing comparatively well against manufacturing, which has seen output fall over the past three consecutive months.

Yet manufacturing represents less than 10 per cent of the country’s economic output and only 7 per cent of total employment, while the corresponding figure for services is nearly 80 per cent.

Joshua Raymond, the director of financial brokerage XTB, said: ‘Given that the majority of UK GDP is reliant on UK services activity, we are now starting to see the UK recession become entrenched in UK data sets.

‘Perhaps the most troubling sign was a fall in new orders for the first time in 19 months as economic activity deteriorated due to higher output costs.’

The speed of job creation has also continued to slow against a backdrop of labour shortages and anecdotal reports that cost burdens are leading some companies to institute hiring freezes.