Britney Spears is continuing to enjoy her freedom and her latest vacation with fiancé Sam Asghari.

On Thursday, the Baby One More Time… singer was pictured looking stunning a pink two-piece as personal trainer Sam, 27, helped her put on a robe a beach in Hawaii.

Britney, 41, is still sporting her purple-dyed hair that she’s confessed to fans she was not entirely happy with.

At one point, it looked as though the Toxic songstress was working her core muscles as she attempted to pull herself up off the sand. 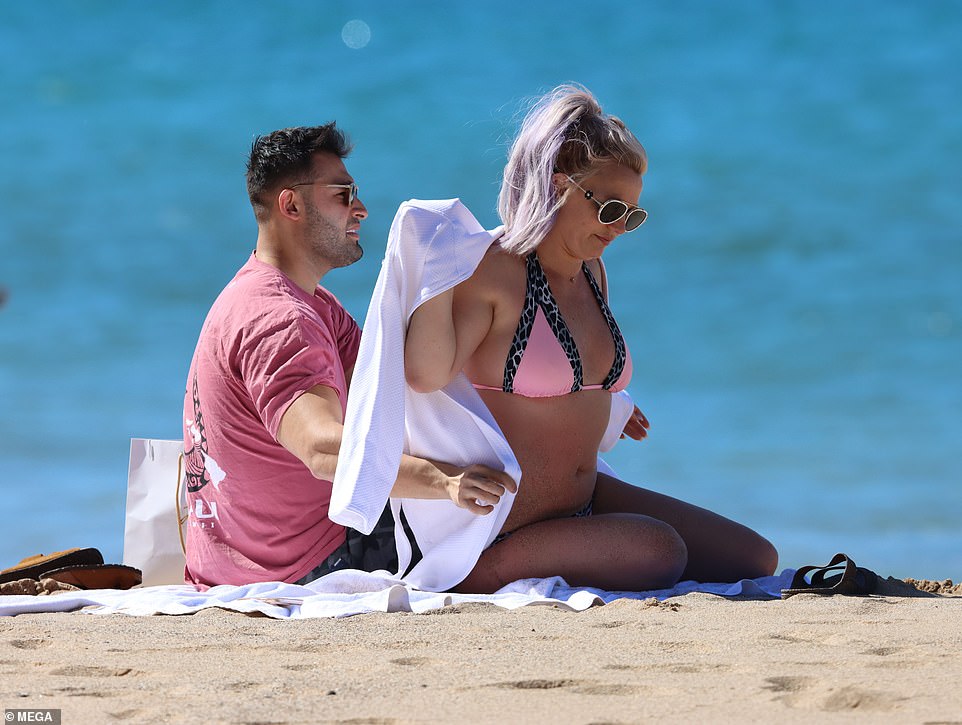 Fun and freedom: Britney Spears shows off her bikini body in a pink two-piece, as she soaks up the sun with fiancé Sam Asghari in Hawaii on Thursday

The sighting comes after it has been claimed that Britney may have secretly got engaged to Sam a whole year before she publicly revealed their news.

The pair first revealed Britney had accepted a marriage proposal from her boyfriend Sam back in September after five years of dating.

But a source has now alleged to The Sun that Britney and Sam have been engaged since December of 2020 and that it was kept secret until her father Jamie Spears agreed to end her conservatorship.

‘Britney told a friend that she actually got engaged to Sam during Christmas the year before last,’ the outlet’s insider claimed. 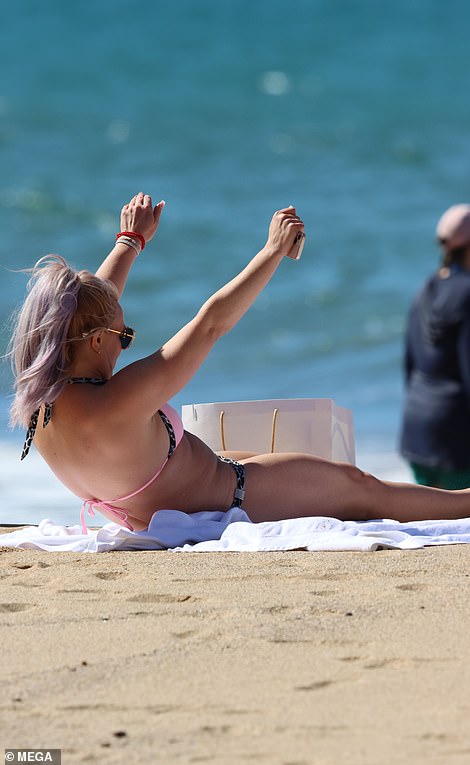 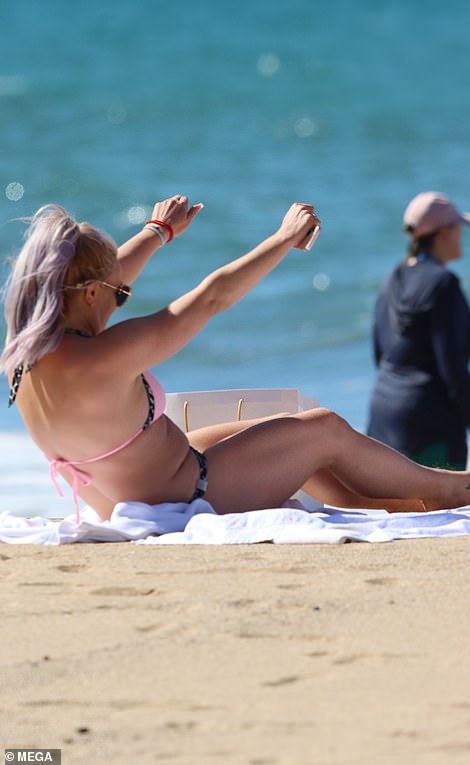 Working her core! Britney flexed her toned tummy as she lifted herself up off the sand 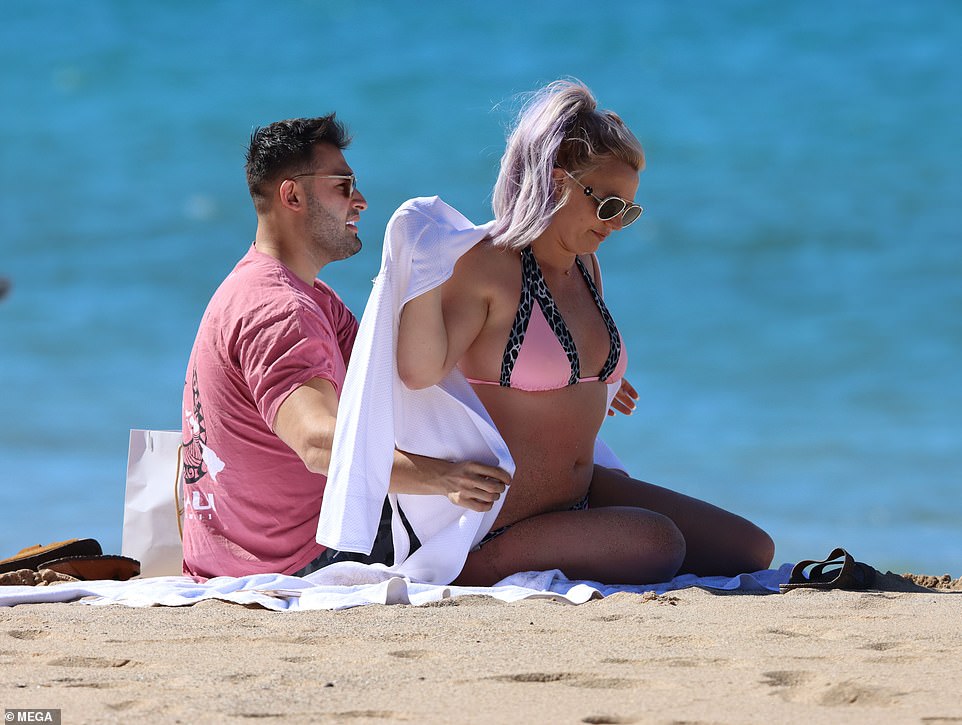 Happy days: The pair first revealed Britney had accepted a marriage proposal from her boyfriend Sam back in September after five years of dating 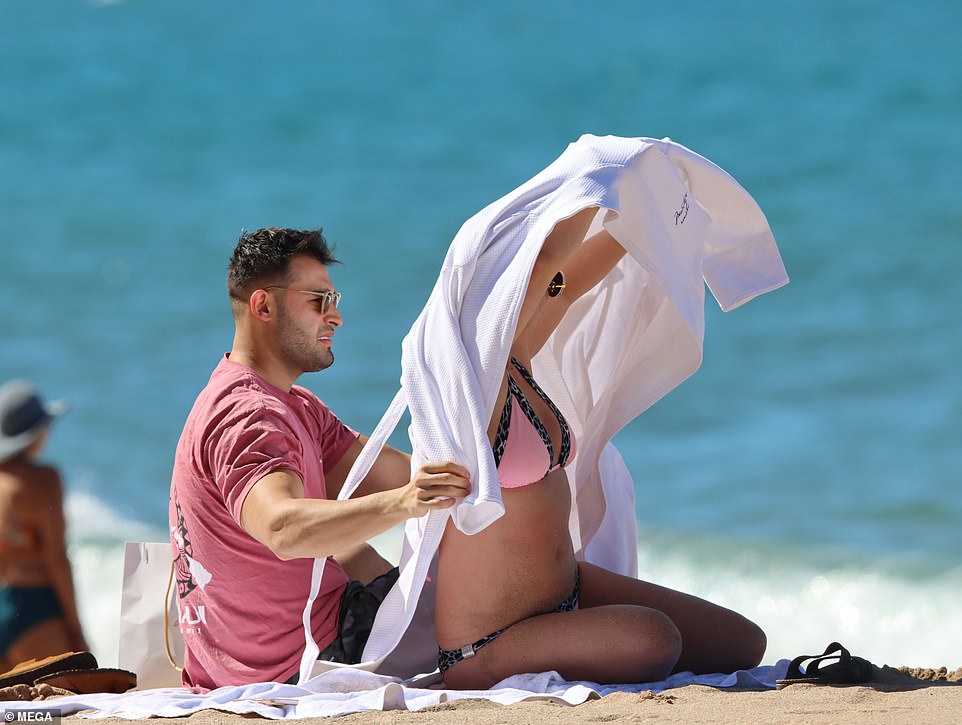 Attentive: Britney was helped by her man as she put on her robe at the beach

The Sun’s source added that Britney allegedly told the ‘friend’ that she ‘had kept it on the down low and only two people knew that they were planning on getting married that far back.

‘Britney said very few people knew because she can’t tell everybody everything.’

The alleged secrecy stems from a bombshell claim that Britney made during her court testimony in July, just four months before her conservatorship would be terminated. 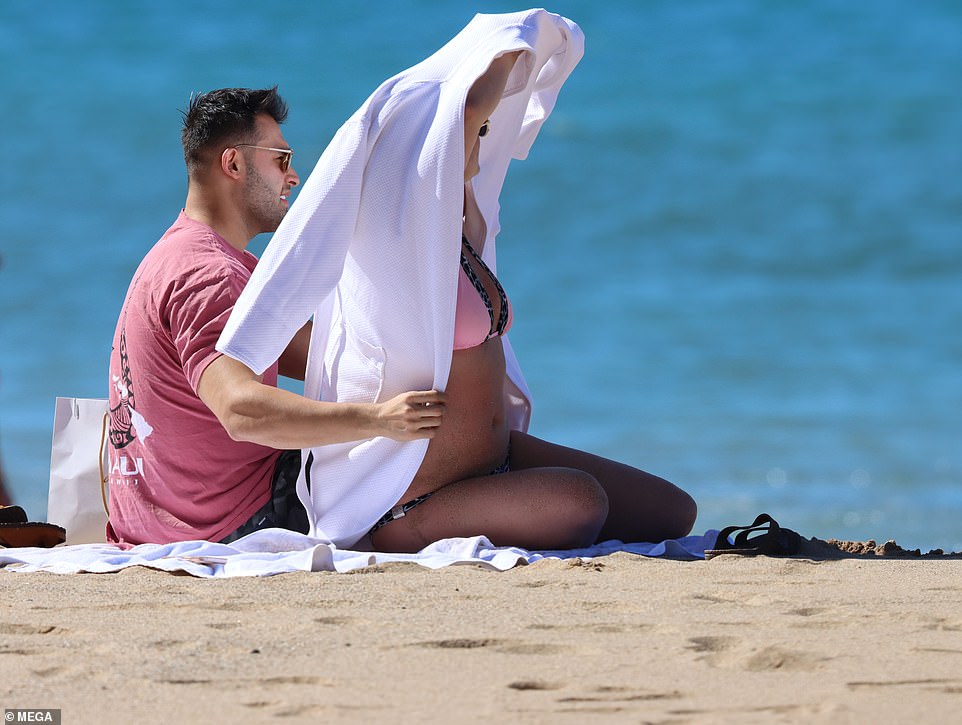 Time to relax: Britney has been on numerous Hawaii getaways over the past year 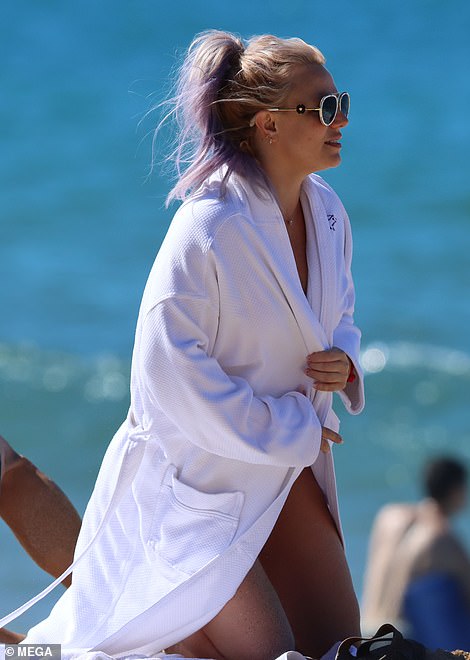 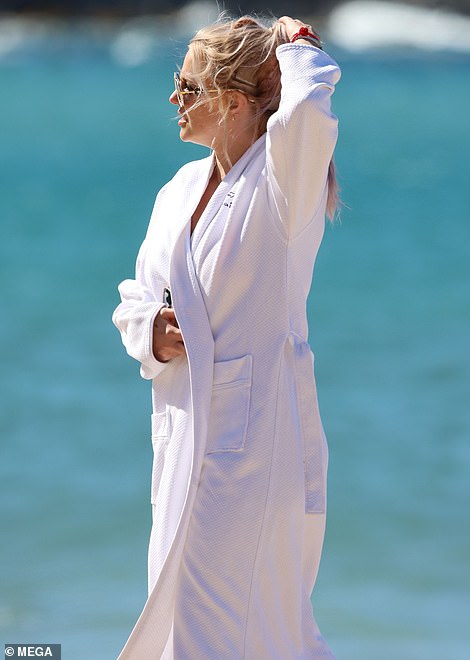 Dye job: Britney, 41, is still sporting her purple-dyed hair that she’s confessed to fans she was not happy with

The singer told the judge that she was ‘not able to get married or have a baby’ while under conservatorship control.

Though she believes her relationship with Sam is the ‘real deal’ and they’re now free to do as they choose, the Toxic songstress allegedly dished to her anonymous pal that they’re in no rush to get married.

Rumblings about a potential engagement began in early September when Sam was photographed seemingly shopping for rings at a Cartier store in Beverly Hills. 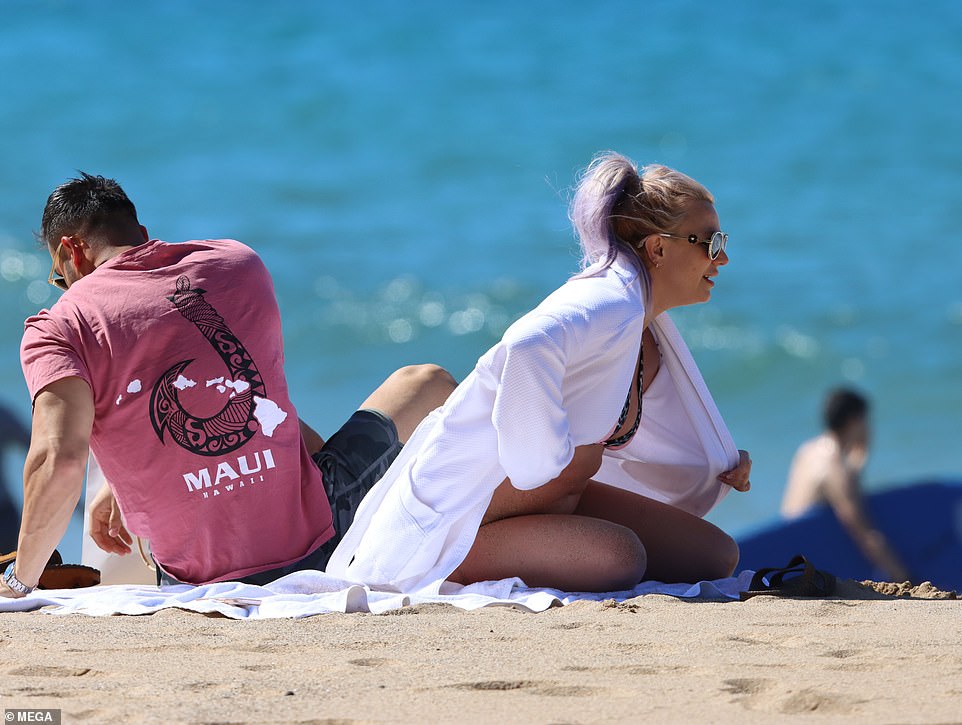 Time to enjoy: Britney’s conservatorship was officially terminated by a judge on November 12 last year 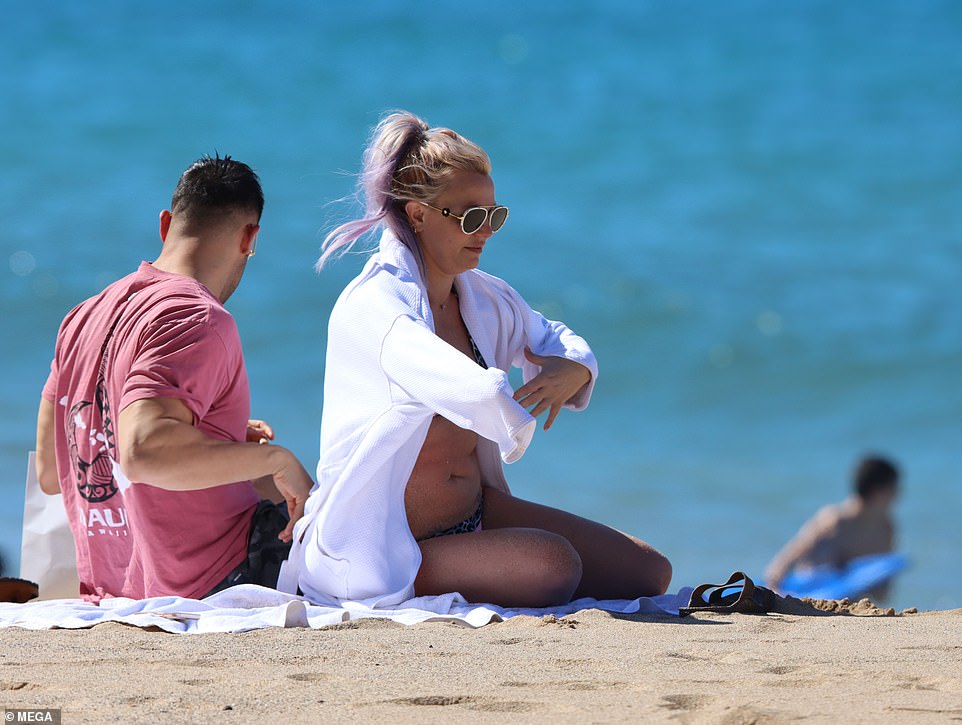 No more: In August, Jamie had agreed to step down as conservator after nearly 14-years of control over her estate. He was suspended in late September 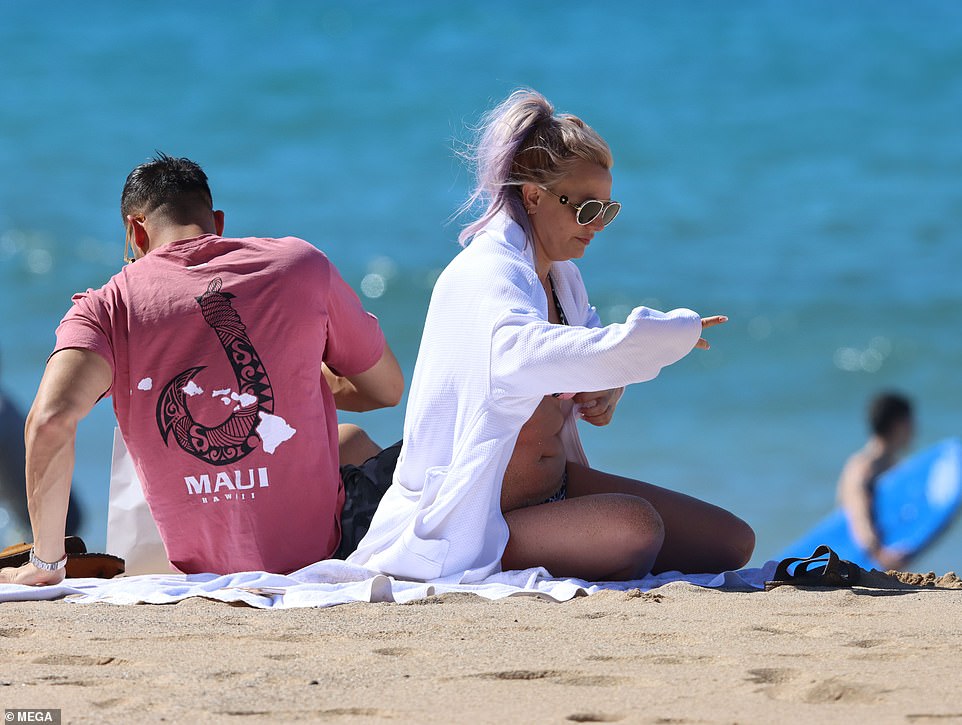 Family drama: Sadly, Britney has also been involved in a spat with her sister Jamie Lynn who has released a tell-all book

Although many believed a proposal was in the works, The Sun’s source claimed that Britney knew about the shopping trip and that Sam was replacing the ring he’d already given her.

She allegedly said that ‘one of the diamonds fell out of her engagement ring and Sam let her know he was going to replace it.

‘So when the stories about an engagement ring came out, she claimed it was really nothing new to her.

Sam then famously uploaded two images of what appeared to be an engagement ring to his Instagram Story, which he would later delete. 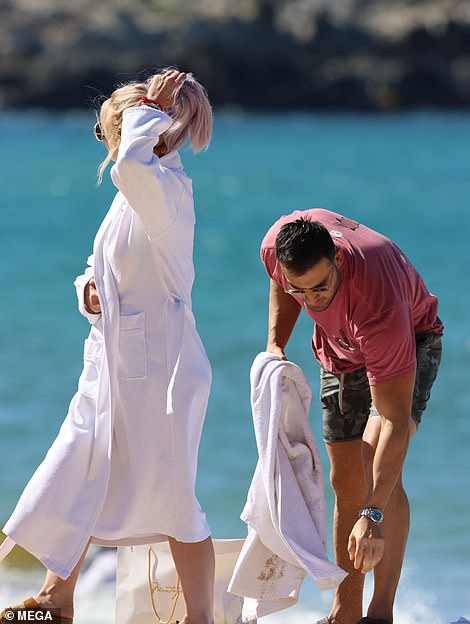 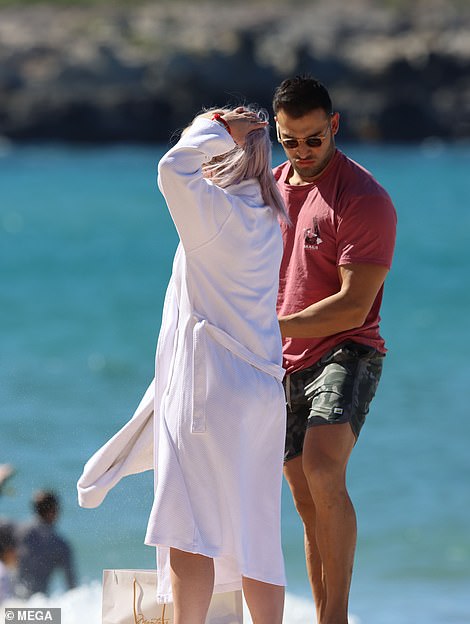 Couples retreat: The loved-up pair have been enjoying their time away in Hawaii this week 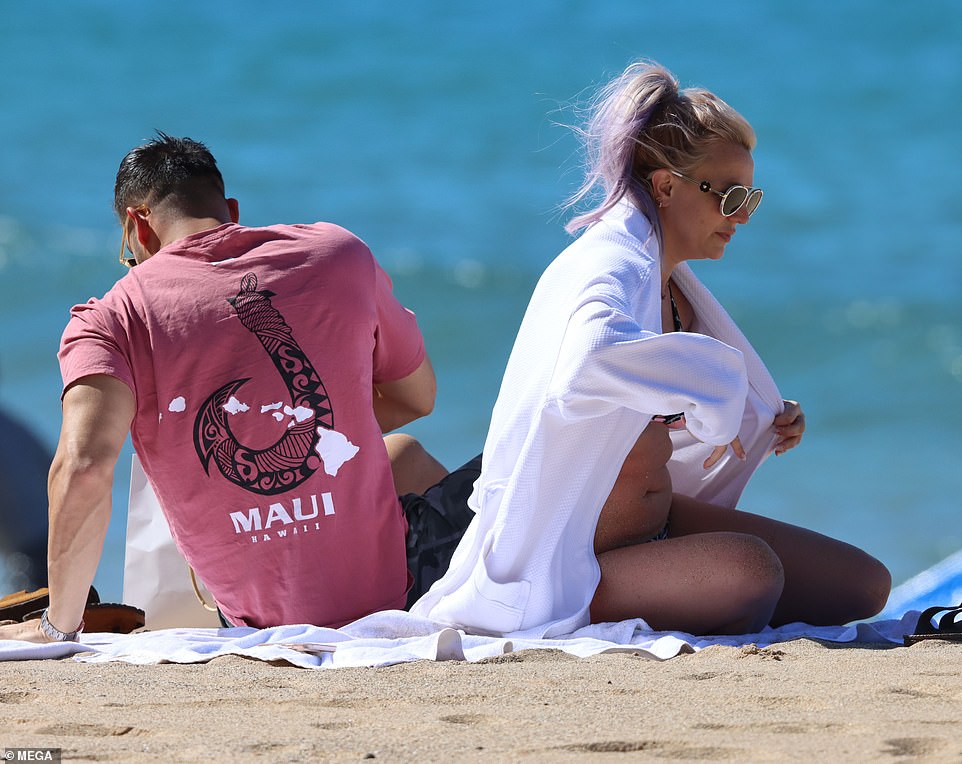 Family: Britney has also expressed her desire to have more children

‘Account got hacked and was photoshopped – calm down everyone!’ he wrote in an attempt to quash proposal rumors.

Five days prior to the engagement announcement, Britney’s father Jamie filed a petition to the Los Angeles Superior Court to end her ‘abusive’ conservatorship.

In August, Jamie had agreed to step down as conservator after nearly 14-years of control over her estate. He was suspended in late September.

Britney’s conservatorship was officially terminated by a judge on November 12, 2021.

Though she may have found ‘the real deal’ with Sam, Britney is no stranger to walking down the aisle.

She famously married her childhood friend Jason Alexander, 40, during an impromptu ceremony in Las Vegas, which took place in 2004. They were married just 55 hours.

In that same year, Britney became romantically linked to dancer Kevin Federline. They tied the knot in September 2004.