Brooklyn Beckham and his bride-to-be sign the mother and father of all prenups!

Brooklyn Beckham and his bride-to-be sign the mother and father of all prenups! Star prepares to wed heiress whose parents are three times richer than Posh and Becks

By Katie Hind and Charlotte Griffiths for The Mail on Sunday

Brooklyn Beckham is understood to have signed a prenuptial agreement with his heiress bride-to-be Nicola Peltz.

The £380 million fortune of 23-year-old Brooklyn’s parents, David and Victoria, is dwarfed by the estimated £1.3 billion wealth of Miss Peltz’s financier father Nelson.

News of the prenup comes as preparations for Saturday’s £3 million ceremony and party at the Peltz family mansion in Palm Beach, Florida, gather pace.

David and Victoria have already jetted to Miami together with family members, including daughter Harper and Victoria’s niece Libby Adams.

Despite her future mother-in-law’s knowledge of fashion, Miss Peltz, 27, recruited Leslie Fremar – a stylist who has worked with Hollywood A-listers Demi Moore and Charlize Theron – to help choose her dress. The pair travelled to the headquarters of Valentino in Rome and Miss Peltz has confirmed her gown has been designed by the fashion house’s Pierpaolo Piccioli. 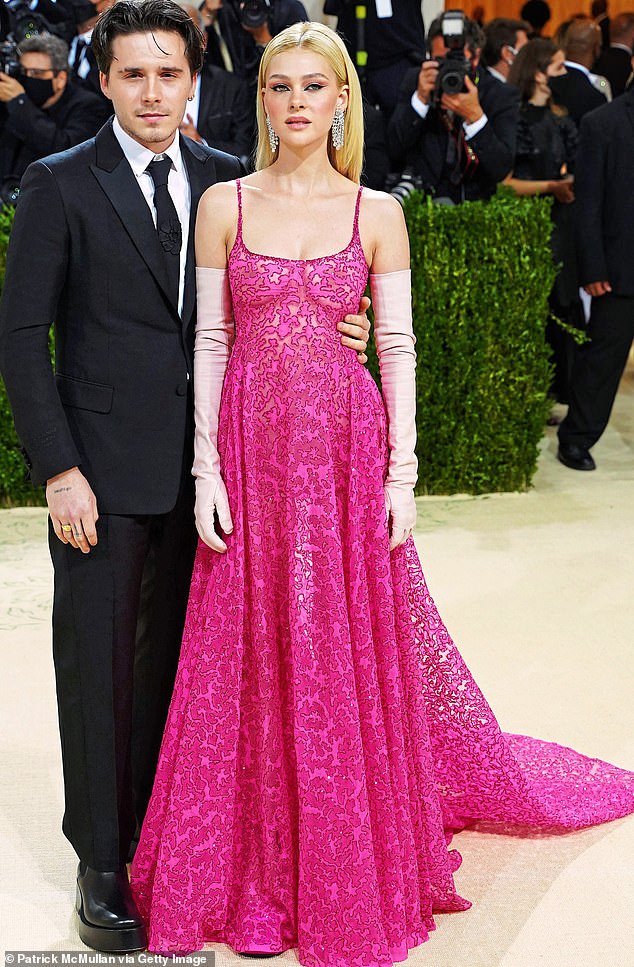 ‘Nicola trusts Leslie implicitly and, while her dress is being made by Valentino, Leslie is the person she has turned to help with how she will accessorise and how she will have her hair and make-up,’ a source said.

Brooklyn’s godfather Sir Elton John will be absent due to the rescheduling of his Yellow Brick Road tour, but his other godfather, Dave Gardner, will be there.

There have also been reports that American football legend Tom Brady will be among the guests, possibly with his wife, supermodel Gisele Bündchen, but speculation that the Duke and Duchess of Sussex could attend are wide of the mark. Brooklyn’s younger brothers, Romeo and Cruz, will be best men, while Harper will be a bridesmaid. 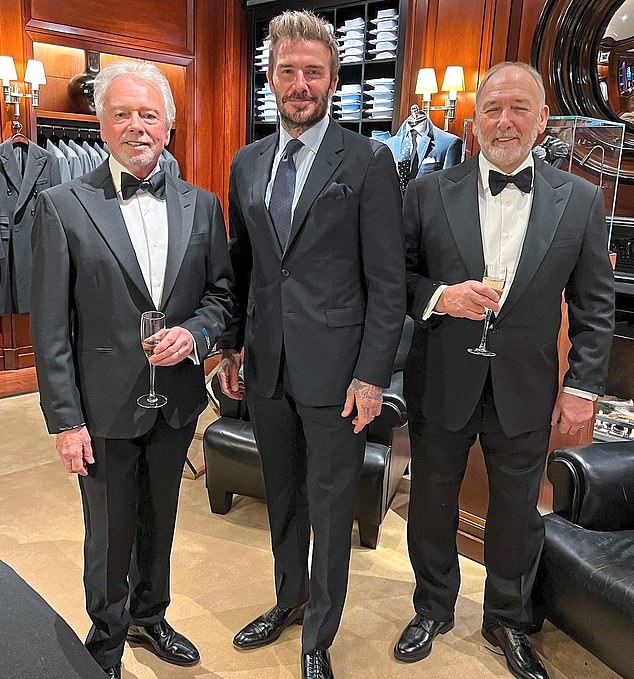 News of the prenup comes as preparations for Saturday’s £3 million ceremony and party at the Peltz family mansion in Palm Beach, Florida, gather pace. David and Victoria have already jetted to Miami together with family members, including daughter Harper and Victoria’s niece Libby Adams

Miss Peltz’s maternal grandmother will be her maid of honour.

David Beckham has no formal role, but friends say he has been tasked with ensuring that all the Beckham men look their best.

Two weeks ago he met his father Ted and father-in-law Tony Adams to buy suits, and captioned a photograph with the words: ‘Creating special memories, wedding plans under way and the dads are all suited and booted.’ The couple have confirmed the marriage will be a Jewish ceremony. ‘It’s strange, because the more wedding meetings that we have, the more real it feels,’ Brooklyn told Vogue magazine recently. ‘I’m excited. I’m wearing a yarmulke [a Jewish head covering].’

The wedding will take place at the Peltz family’s £76 million, 44,000 sq ft beach house. Nelson and his wife Claudia also have a 27-bedroom mansion near New York which boasts an ice rink.

Brooklyn and Miss Peltz met in 2017 and began dating two years later. Announcing their engagement on Instagram in July 2020, Brooklyn wrote: ‘Two weeks ago I asked my soulmate to marry me and she said yes. I am the luckiest man in the world.’ His fiancee wrote: ‘I can’t wait to spend the rest of my life by your side. Your love is the most precious gift.’