Over the weekend, the Queen, 95, made an unexpected announcement about Camilla’s destiny once Prince Charles becomes king. The monarch used her Platinum Jubilee message to express her “sincere wish” that the Duchess of Cornwall takes on the title of Queen Consort when Charles is ruler.

The news came despite Clarence House previously saying she would be known as Princess Consort.

A rolling YouGov poll that asks “Should the Duchess of Cornwall become Queen if Prince Charle becomes King?” shows the changing opinion of the public on a bi-annual basis, with data dating back to 2019.

The most latest findings dating from November show that just 14 percent of respondents thought she should take on the “Queen Consort” title.

While 41 percent said she should have the Princess Consort title that had previously been confirmed as the one she would be taking. 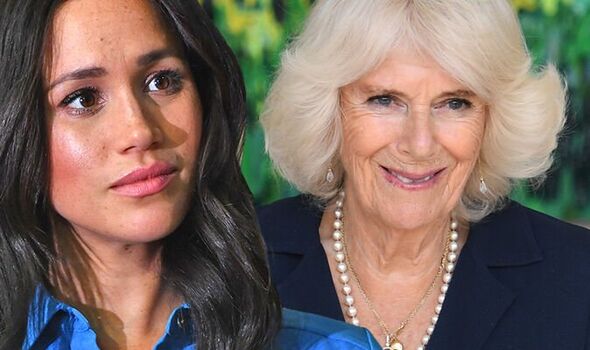 Previously the public had some ill feelings towards Camilla, at the beginning of her relationship (Image: Getty)

However, following the news that Camilla would become Queen Consort, there’s a suggestion that the Queen’s intervention might have shifted opinion.

Previously the public had some ill feelings towards the Duchess, mainly at the beginning of her relationship with Charles.

But in recent years her profile has boomed as the Duchess has championed several important causes – including sexual violence against women – while also quietly supporting her husband.

Ms Levin was asked whether there was a “lesson” the Duchess of Sussex could learn from Camilla, and the royal biographer chuckled and called it “a very good question”.

The Queen expressed her “sincere wish” that Camilla takes on the title of Queen Consort in future (Image: Getty)

Meghan saw a decline in her popularity with the public following her and Prince Harry’s Oprah interview, as the pair made a series of bombshell claims about their time as senior royals.

Currently, YouGov ranks her as disliked by 45 percent of participants in their surveys.

Express.co.uk spoke with Kinsey Schofield, royal commentator and PR expert, about the differences in the way in which Meghan Markle and Camilla are received by the public, particularly in light of her title news, and what the Duchess of Sussex could learn from Camilla.

Ms Schofield, who has more than 10 years of PR experience, claims Camilla “does seem to have more patience than the Duchess of Sussex when it comes to positive press.”

The founder of Los Angeles-based royals site ToDiForDaily.com went on to add there are differences between the two Duchesses and how they approach life as a consort to a Prince.

She told Express.co.uk: “The biggest difference between the two women is that the Duchess of Cornwall prefers to let Prince Charles lead while she stays in the background.

Meghan saw a decline in her popularity with the public following her and Harry’s Oprah interview (Image: Getty)

“Meanwhile, the Duchess of Sussex does not follow the same rule and oftentimes outshines Prince Harry.

“In Camilla’s humble and quiet approach to serving, she has won the public and the press over.”

Ms Schofield claims that Meghan could utilise the lucrative deals with streaming giants Netflix and Spotify that she signed last year, and any future projects to “uplift” her image.

She said: “Time heals all wounds and thanks to that, Camilla has been forgiven for a lot of hurt.

“The same will be said about Meghan Markle if she uses platforms like Spotify, Netflix, and any future book deals to uplift instead of tear down.

“Meghan will never sit back for Prince Harry to lead because their relationship is difference and the two consider each other equal partners.

“She just has to continue to redefine who the Sussexes are as a couple and family and break away from royal expectations.”

Kinsey Schofield claims Meghan could use similar tactics to Camilla to ‘uplift’ her image (Image: Getty)

Camilla recently received a popular reaction from the crowds and on social media, at her first outing since the Queen paved the way for her to become Queen Camilla.

On Tuesday, the Duchess was welcomed to Roundhill Primary School in Bath, where she toured classrooms and joined in with a range of lessons.

“I definitely heard at least one child asking when “Queen Camilla” would be there.”

One royal fan took to Twitter to say: “This will be a momentous occasion!

“I’m rather excited about the Duchess of Cornwall being recognised as Queen Consort.”

While another added: “The sea of negativity has changed and so it should.”

Kerry Katona shows off huge new tattoo on her forearm