Camilla has been described as fiercely protective of her beloved husband Prince Charles by royal author Robert Jobson. The Duchess, the expert detailed in his upcoming book “William at 40: The Making of a Modern Monarch”, is ready to let her stepson know when she disagrees with his behaviour towards the heir to the throne.

The author claimed the Duke of Cambridge has a “notably short fuse” in private.

He also reported a senior former member of the Royal Household claiming the Duke of Cambridge believes to be “on a level” with his father as they are both heirs to the throne, rather than being more mindful of the pecking order.

While Mr Jobson said the Prince of Wales tends to “tread carefully” when dealing with William, Camilla is “not as accommodating”.

In an extract from the book published by the Mail on Sunday, Mr Jobson wrote: “She’s also quite prepared to put William in his place when she feels he’s abusing his father’s generosity and kindness.” 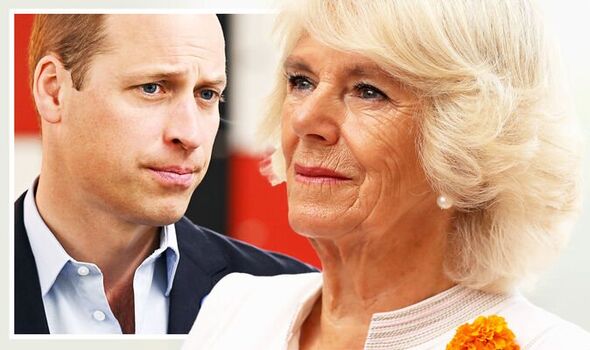 Camilla is ‘quite prepared to put William in his place’, according to a royal expert (Image: GETTY)

Camilla with Prince Charles and the Cambridges at the premiere of No Time To Die in 2021 (Image: GETTY)

Moreover, the author reported a courtier claiming: “The truth is the Duchess feels it is her duty to protect the Prince of Wales from himself sometimes.

“He is going to be King, and she doesn’t mind reminding others in the family of that now and again – and that includes his son and heir.”

Mr Jobson noted the Duchess of Cornwall isn’t keen on outright confrontation with Prince William but can adopt more subtle means to show where she stands.

Reporting the words of a different courtier, Mr Jobson wrote: “I remember one occasion when they were leaving Windsor Castle after a joint event, and the Duke of Cambridge had learned that his father had police outriders from the Special Escort Group for a journey, as his royal status warranted.

Camilla and Prince Charles got married in 2005 (Image: GETTY)

“He asked his father if he and Catherine could tag along behind in convoy, making it easy to get through the traffic.

“As William and Catherine emerged, all they could see were the blue flashing lights of the motorbikes disappearing in the distance.”

Camilla married Prince Charles in 2005, six years after they made their relationship public.

The Queen has shown her support for Camilla earlier this year (Image: GETTY)

The Duchess has since proven herself as a working member of the Firm, taking on an increasing amount of duties and patronages.

Among the causes she proudly champions, there is putting an end to domestic violence and supporting victims of abuse.

She also shares with the Prince of Wales a love for the arts, and was recently appointed the new royal patron of the National Theatre – a role she took on after the Duchess of Sussex had to relinquish it due to her exit from the Firm as a working royal.

In recent months, the Queen clearly showed her appreciation for the Duchess twice.

Camilla and Prince Charles made their relationship public in 1999 (Image: EXPRESS)

On New Year’s Eve, Buckingham Palace announced Camilla had been appointed a Royal Lady of the Order of the Garter – the most senior order of knighthood in the British honours system.

Two other prominent members of this order are Prince Charles and Prince William.

On February 5, on the eve of the beginning of the Platinum Jubilee, the Queen also ended speculation on which title Camilla would get once Prince Charles accedes to the throne.

In a deeply personal statement, the monarch stressed how important for a sovereign is the support of the royal consort.

Camilla is to become Queen Consort when Charles accedes to the throne (Image: GETTY)

She said: “I am fortunate to have had the steadfast and loving support of my family. I was blessed that in Prince Philip I had a partner willing to carry out the role of consort and unselfishly make the sacrifices that go with it. It is a role I saw my own mother perform during my father’s reign.

“This anniversary also affords me a time to reflect on the goodwill shown to me by people of all nationalities, faiths and ages in this country and around the world over these years.

“I would like to express my thanks to you all for your support. I remain eternally grateful for, and humbled by, the loyalty and affection that you continue to give me.

“And when, in the fullness of time, my son Charles becomes King, I know you will give him and his wife Camilla the same support that you have given me; and it is my sincere wish that, when that time comes, Camilla will be known as Queen Consort as she continues her own loyal service.”

Why Shinzo Abe’s state-funded funeral has triggered a backlash